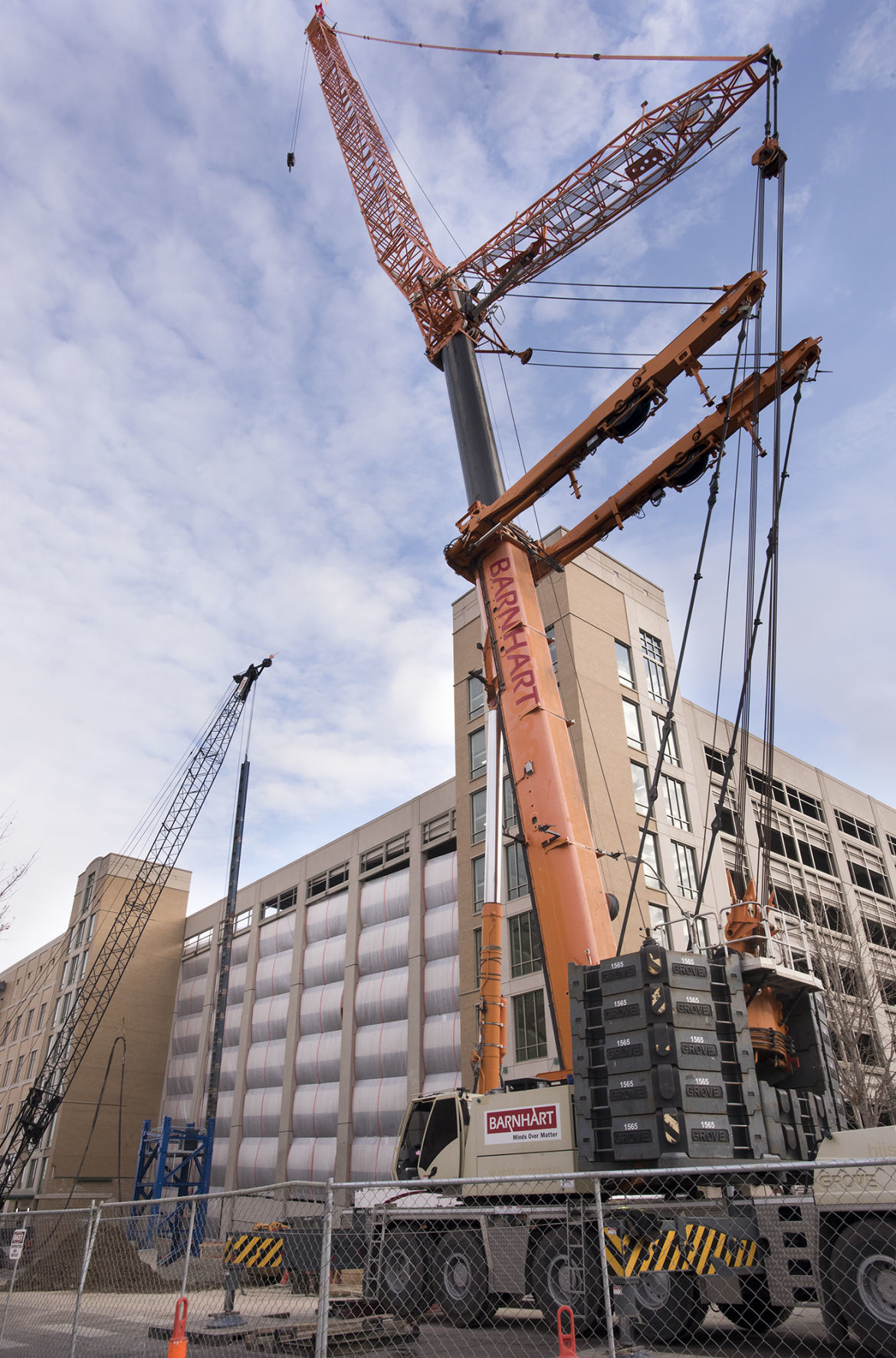 A 300-foot mobile crane sits ready to erect a 280-foot tower crane at the site of the future Lied Place Residences in November. 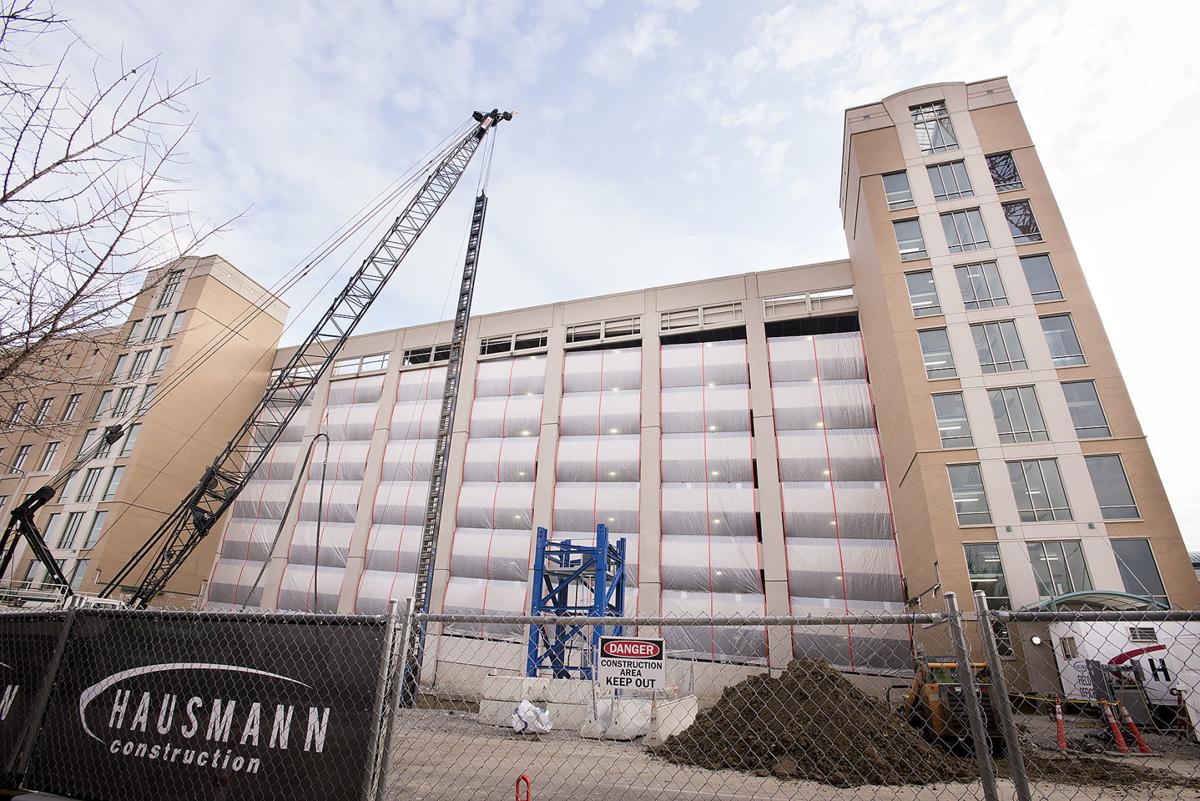 The base for a 280-foot tower crane (blue) sits on the site of the future Lied Place Residences on Tuesday.

The city acquired the Eagle Parking Garage, once a private parking facility, earlier this year. A $5.2 million renovation effort will seek to enhance the curb appeal of the 1950s garage.

Work is underway to build the skyline-changing Lied Place Residences, and the city could soon begin work of its own on the parking garage adjoining the high-rise.

Lincoln's Parking Services has asked for bids to fill in the open panels on the north side of the eight-floor Que Place Garage.

Parking Services Manager Wayne Mixdorf said the concrete infill project, estimated to cost $250,000, will wall off the garage, eliminating any risks posed by a 6-inch gap between the parking facility and the new condominium and office tower.

The project will be done on the city's dime, Mixdorf said, without drawing from the $5 million in tax-increment financing approved for the $31 million Lied Place Residences project.

Most of the TIF funds will go to pay for the building's glass façade and for site acquisition.

When it's complete, Lied Place will have 37 condos on 15 floors, with a restaurant and lobby at street level and four floors of office space. It will be the second-tallest building in Lincoln, next to the Capitol.

A total of 100 parking spaces in the garage will be made available to the building's occupants and will be sold at market rate, Mixdorf said.

Employees and residents of Lied Place will access the parking garage through the existing elevator towers, Mixdorf added.

Mixdorf said work on the infill project could begin in January and should finish by early May.

A zoning ordinance exemption carved out by the City Council on Monday will allow residential health care facilities and retirement homes to serve beer and liquor to their residents and guests.

Kent Seacrest, representing the owners of Eastmont, said the zoning change mirrors one in the 1990s to allow alcohol consumption at golf courses if they were in residential-zoned areas.

Eastmont officials want residents to have the opportunity to buy alcohol at its restaurant or take alcohol purchased at the gift shop to their rooms on the expanding campus at 6315 O St., he said.

Making this exemption extends the ability to enjoy a glass of wine, for example, to some of the city's senior population who have trouble getting out into the community, Seacrest added.

No one opposed it at a public hearing last month.

"This, to my mind, is nothing other than drinking in your own home," Councilman Roy Christensen said.

Work has begun to remove asbestos inside the city's newest parking garage.

The city acquired the privately owned Eagle Parking Garage earlier this year and took over the lease on the land where the 340-stall facility sits at 14th and N streets.

Only 15 cars park in the garage daily, but it will close by the end of November as a $5.2 million renovation effort picks up steam, Mixdorf said.

This week, designs to enhance the curb appeal of the 1950s garage were vetted by the city's Urban Design Committee.

"The N Street side is treated in a more traditional pattern, while the 14th Street side has added color and movement to relate to its location within the Downtown Master Plan's envisioned entertainment district," Stacey Hageman, a city planner, wrote in a memo to the committee.

Removing the asbestos and refurbishing the interior of the garage is expected to be a yearlong effort, with plans to reopen the garage to the public in 2021, Mixdorf said.

Mayor Leirion Gaylor Baird has hired a national search firm to assist in finding the city's next fire chief.

Prothman Group, based in Washington state, conducted two searches that eventually led to the hiring of Chief Micheal Despain, who will retire in March.

Despain, who spent most of his career in California, took the helm of Lincoln Fire and Rescue in July 2016. He has served departments for 35 years.

Prothman is also leading a national search for a permanent director of the Lincoln-Lancaster County Health Department. In that case, the city has agreed to pay the firm up to $26,700.

Gaylor Baird on Monday told the City Council her search for a permanent director to lead Lincoln Transportation and Utilities is focused on finding someone in the area.

Interim Director Tom Casady will stay on through Feb. 29.

The redevelopment agreement for the 20-story Lied Place, a skinny skyscraper that will fit between Q Street and the city's Que Place parking g…

'I can't believe that I was that stupid:' Audit says Nebraska city overpaid for supplies by 'hundreds of thousands'

In his 26-year career overseeing public works in Friend, Patrick Gates routinely turned to an Iowa distributor for supplies to keep the city o…

A 300-foot mobile crane sits ready to erect a 280-foot tower crane at the site of the future Lied Place Residences in November.

The base for a 280-foot tower crane (blue) sits on the site of the future Lied Place Residences on Tuesday.

The city acquired the Eagle Parking Garage, once a private parking facility, earlier this year. A $5.2 million renovation effort (proposed image shown) will seek to enhance the curb appeal of the 1950s garage.

The city acquired the Eagle Parking Garage, once a private parking facility, earlier this year. A $5.2 million renovation effort will seek to enhance the curb appeal of the 1950s garage.