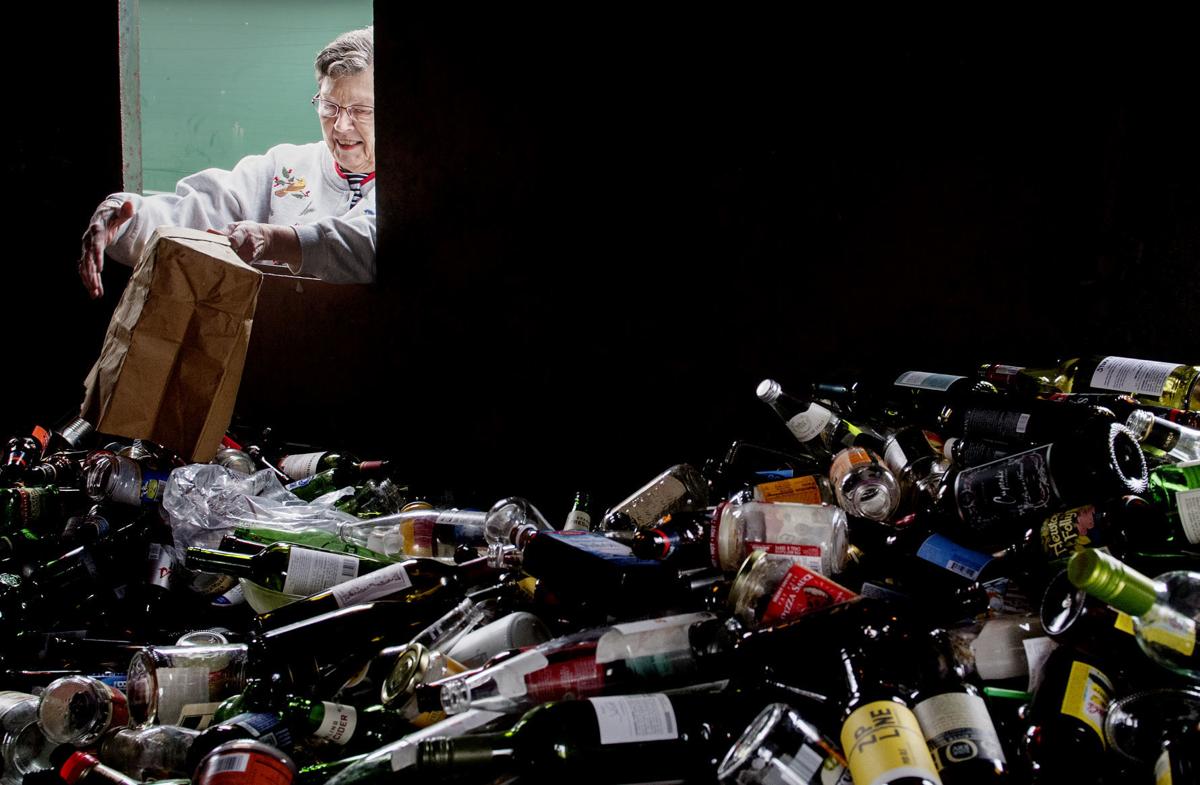 Valoris Fleischman empties a bag of glass onto a large pile at the city's recycling drop-off site near Seacrest Field on Wednesday.

Cars line up Wednesday at the city's recycling drop-off site near Seacrest Field.

China’s decision to require cleaner recyclables has put some U.S. recyclers out of business or forced them to limit the kind of materials they will take.

But in Lincoln the China decision has had a more limited impact, so far.

Recycling processing companies -- which buy from local haulers, sort and resell material -- have raised their rates, but they are still taking all the traditional recycling products, except for glass and plastic bags.

“(China’s decision) affected everyone, but it probably has had a different impact here than on the coasts, largely because we haven’t had the same luxury of sending everything off to China,” said Dale Gubbels, CEO of First Star Fiber, a Nebraska processor.

Both First Star Fiber and Mid America Recycling have raised their rates to haulers, who handle Lincoln’s curbside recycling.

In some cases the rates are higher than the city landfill fees.

In Lincoln, recycling companies relied more heavily on domestic companies to purchase their recyclables and have built up relationships with domestic mills, Gubbels said.

So local processors still have a market for recyclables. But, because of supply and demand, the prices for recyclable products have dropped.

“We don’t have much choice. We have to cover our costs,” Gubbels said, about recycling processors raising their rates.

The city has been less affected because the recyclable material from the public sites is already sorted, giving it a higher value, said Donna Garden, assistant director at Public Works and Utilities.

“The materials we take to the processors are clean and separated,” she said.

But the city has seen a drop this year in the price it is reimbursed for recyclable material. The combined value for total recyclables has dropped from about $40 a ton at the beginning of the year to about $28 a ton, according to Garden.

Because of the increase in recyclables being taken to city centers, the city's revenue of about $16,000 a month has not changed.

The city has also seen an increase in costs, from an average of $37,000 per month to $55,000 per month, for hauling recyclables from the city sites because of the dramatic increase in cardboard recycling since the city banned corrugated cardboard at the landfill April 1.

The city pays hauler Von Busch for pulling each container from a recycling center, under a three-year contract. The cost per pull hasn't changed but the amount of material dropped off at city sites has increased, Garden said.

But recycling is not just about the money, according to Garden. Recycling is important because it diverts material from the landfill, saves natural resources, provides jobs and "is a good thing for the environment."

"We have to keep that in mind," she said.

Local haulers are concerned as they see some processors in surrounding states refusing to take some plastic and other material and raising rates.

“Glass is gone. Plastic's on the way out,” said Ryan Hatten, with Paragon Sanitation and president of Lincoln Solid Waste and Recycling Association.

What happens in surrounding states usually finds its way to Nebraska, he said.

But Gubbels and Kelley McReynolds, with Mid America Recycling, are optimistic that U.S. companies will find more ways to use recyclable material, increasing demand.

First Star Fiber is working on a program where consumers will be able to buy a bright orange Hefty Energy bag that they will fill with nonrecyclable plastic, like bags, bread wrappers, straws and items that degrade the value of recyclable material.

The plastic will be sent on to be used as a fuel or to a company that can use it for making fence posts, railroad ties, landscaping timbers and parking lot bumpers, Gubbels said.

Gubbels said he is also seeing some investments in the domestic market, a hopeful sign that there will be some new markets to replace China.

But McReynolds said he expects the fees to remain high and pressure to keep contaminants out of the recycling stream will continue.

Recycling companies moved to single stream (where consumers do not have to separate the plastic from the paper and the cardboard) because they wanted to increase the level of recycling by making it more convenient, Gubbels said.

Recyclers, like him, didn't take into account the cost of putting in the sorting system or that commodity prices would drop, he said.

Antelope Creek removed from US impaired waters list: 'It's a big deal'

Lincoln’s Antelope Creek, which runs 11 miles through the heart of the city, has been removed from the nation’s Impaired Waters list.

Mayor Chris Beutler announced Thursday that 50,000 pounds of toxic materials were collected during the first year of operation of Lincoln’s Ha…

Mid America Recycling's Lincoln location has changed ownership again and will operate under a new name.

Valoris Fleischman empties a bag of glass onto a large pile at the city's recycling drop-off site near Seacrest Field on Wednesday.

Cars line up Wednesday at the city's recycling drop-off site near Seacrest Field.