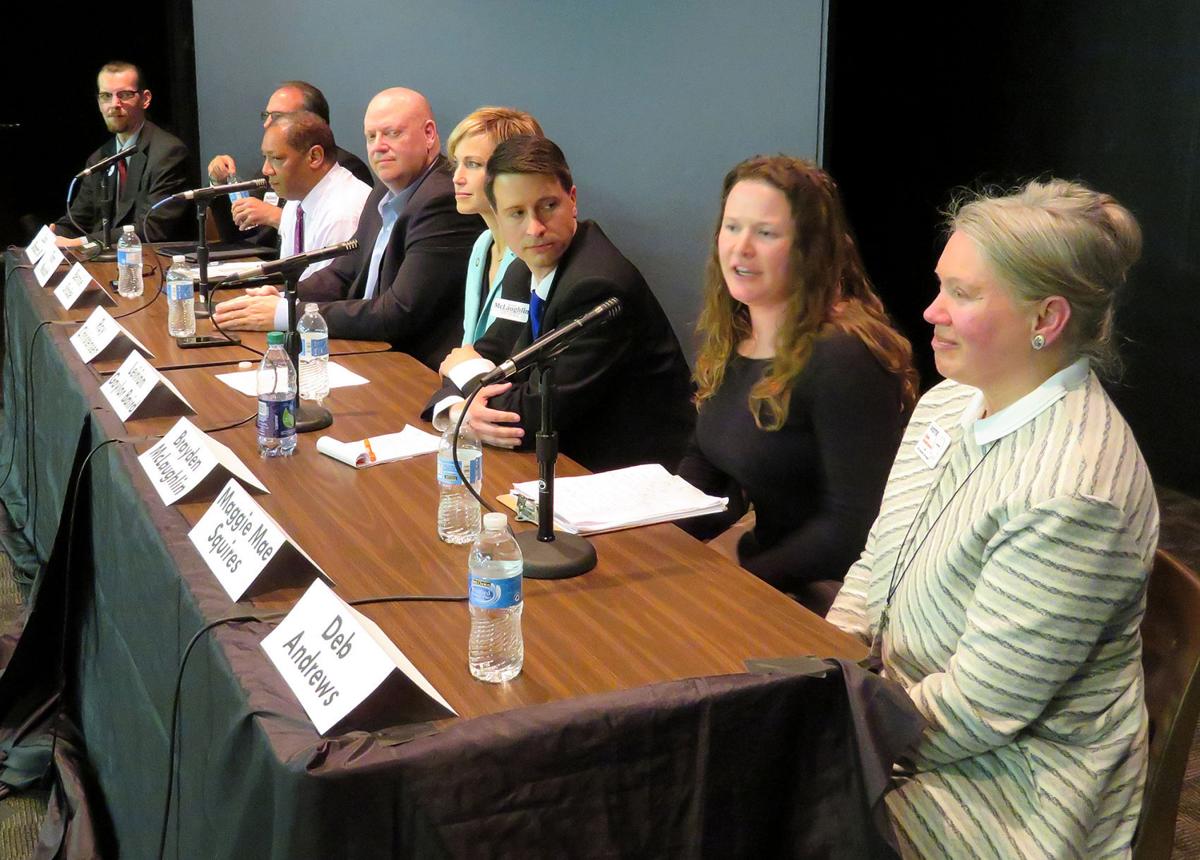 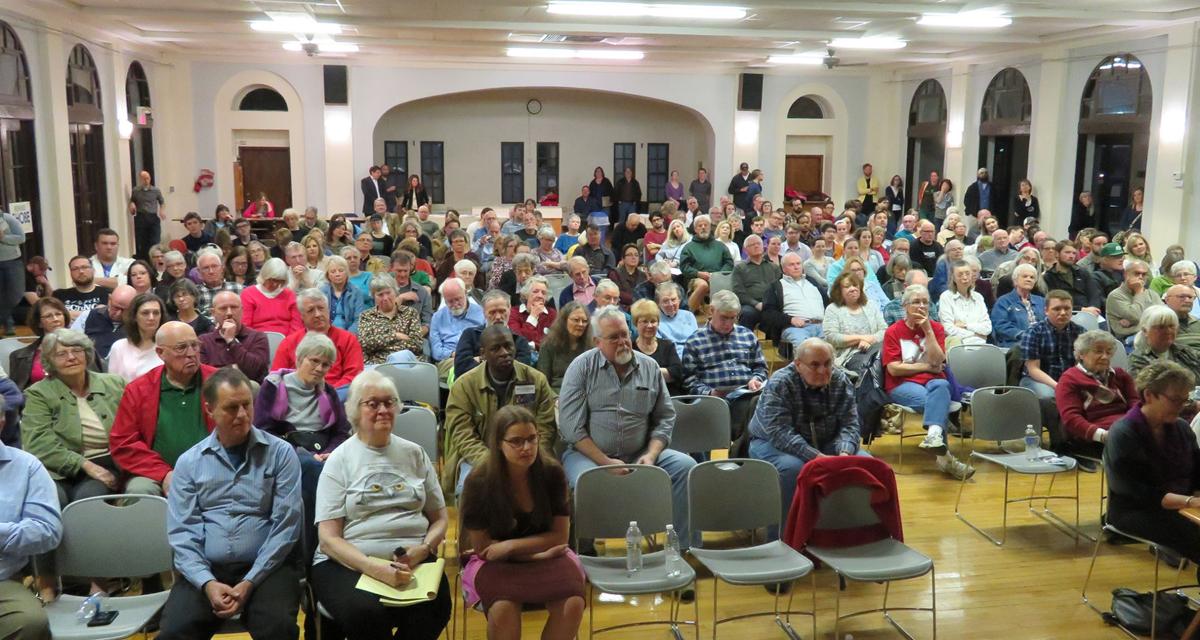 A large crowd came to hear from the eight at-large Lincoln City Council candidates who participated in a forum focused on conservation-related issues Thursday at Auld Pavilion.

All attendees at the two City Council candidate forums last week were civil and courteous — the eight candidates and audiences, alike.

Because of the recent presidential campaign and election aftermath, audiences were specifically asked to be courteous at each of the forums. One was sponsored by Leadership Lincoln, a nonprofit group that encourages diverse local leadership, and the other by the Nebraska League of Conservation Voters and five other organizations with liberal reputations.

The audience of approximately 300 people at the Conservation League forum Thursday night so rigorously abided by the “no cheering, no jeering” rule that no one clapped after individual candidates spoke; applause was held until the end of the 90-minute forum.

The eight candidates for the three at-large council seats said they respected each other. And two — Roy Christensen and Leirion Gaylor Baird, who sometimes are on opposite sides of city issues — hugged.

All eight candidates agreed that humans played a role in climate change, a consensus that wasn't evident when a similar question was posed at a local candidate forum two years ago.

Some conservatives nationally downplay any connection between human activity and climate change, and the question at last week's forum was an obvious attempt to see which local candidates, if any, share this viewpoint.

All council candidates also indicated some level of support for local environmental efforts in their answers.

* Bennie Shobe: The city needs to make responsible choices, listen to science and the experts, and do things to slow down climate change. The city needs to remove barriers for citizen participation and find innovative ideas for what humans can do to mitigate further damage to the planet.

* Brayden McLaughlin: City codes keep people from putting up solar panels and make building very small houses almost impossible. He said we should all try to be the best stewards we can, personally and as businesses, neighborhoods and public utilities.

* Deb Andrews: The city has not weighed in on potential pollution from a proposed chicken processing plant at Fremont, upstream from Lincoln, and said the city needs to stop running big, empty buses fueled by diesel.

* Leirion Gaylor Baird: The city has an important role in environmental issues, she said, and pointed to the fact that 48 percent of the Lincoln Electric System portfolio comes from renewable energy. “We have to be good stewards over the long term.”

* Lou Braatz: Climate change "is real, is man-made and is irreversible." The city could look at converting all public buildings to renewable energy and could help homeowners in older neighborhoods weatherize their homes.

* Maggie Mae Squires: Labels herself a “progressive” and is passionate about environmental issues. She suggested neighborhood associations might get together to put up wind turbines. She said the city needs to formally oppose fracking near the city and that Pinnacle Bank Arena should be covered in solar panels.

* Roy Christensen: Pointed to his own successful efforts to get Black Hills Energy to pay for the conversion of two city buses to natural gas. "Clean energy makes sense, saving energy makes sense and polluting less makes sense," he said. The city needs to participate in what is “reasonable and possible.”

* Tom Nesbitt: A much-higher authority has "given us the natural resources ... and our planet and we need to take care of those." He said he is not an expert on environmental issues but would listen, learn and take a leadership role in this area.

All eight candidates disavowed negative advertising, and said they respected each other as people who cared about Lincoln, despite differing philosophies, in their answers to specific questions about campaigning and partisan politics.

Candidates have no control over these groups, noted Christensen.

In answers to a carefully worded question about the role of Planned Parenthood locally, none of the eight candidates said anything derogatory about the organization.

Planned Parenthood, because it provides abortion services as well as general health services, has become a lightning rod for anti-abortion sentiments.

None of the candidates said they would specifically oppose a web listing, although several of the candidates, who are registered Republicans and identified themselves as pro-life, offered more cautiously worded support.

Christensen said he was willing to talk with anyone about reducing domestic violence, which he said is a "plague upon us all."

Nesbitt said we need to come together as a community to work on domestic-violence issues.

McLaughlin, who acknowledge Planned Parenthood has provided good general health care services, said he would have to take a look at what would be on the website and what services the city would be promoting.

Andrews, an independent, and Braatz and Shobe, both Democrats, supported working with Planned Parenthood on domestic-assault issues.

Gaylor Baird, a Democrat, supports including Planned Parenthood on a list of agencies but suggested there should be a statement on the website that this is not an endorsement of a particular viewpoint because of the controversy.

"We do have to find ways to get along, despite very strong and different views on the subject of Planned Parenthood," she said.

The Lincoln Police Union has endorsed Councilman Roy Christensen in his re-election bid.

City Council incumbent Leirion Gaylor Baird has already raised almost $100,000 for her re-election campaign, a third more than the next highes…

The 16th Street project -- where 16th has been closed and 17th Street turned into a two-way street -- was no secret.

The Lincoln City Council will begin discussing budget issues in January next year, much earlier than in previous years, under a new schedule t…

Lincoln needs to build at least 1,000 new homes or apartment units each year to keep up with city growth for the next few years, based on the …

A large crowd came to hear from the eight at-large Lincoln City Council candidates who participated in a forum focused on conservation-related issues Thursday at Auld Pavilion.