A candidate for the District 26 legislative seat representing northeast Lincoln is suing the Nebraska Secretary of State to force the race to be recounted by hand.

Russ Barger, who lost to Sen.-elect George Dungan by 224 votes — a 5,960-5,736 margin — filed the lawsuit against Bob Evnen in Lancaster County District Court on Monday.

Barger, a Republican, previously submitted a petition with Evnen on Friday asking for a hand recount in the race and offering to pay the cost of doing so.

The final results of the District 26 race, announced about 10 days after Election Day, fell outside the threshold triggering an automatic recount. The final tally would have had to be within 59 votes for the automatic recount to be ordered.

In his request, Barger said state statute was "silent as to the method required to recount a legislative race," which he said opened the door to his preferred method.

But Evnen's office denied that request, saying any recount would be conducted by a machine tabulator, giving Barger until 5 p.m. Tuesday to accept.

Barger sued Evnen in his official capacity as Nebraska's chief election officer well before that deadline.

The lawsuit, filed by Omaha attorney David Begley, says Nebraska State Statute 32-1118 indicates candidates for Legislature are "entitled to a recount other that the recount method specified" elsewhere in state law. 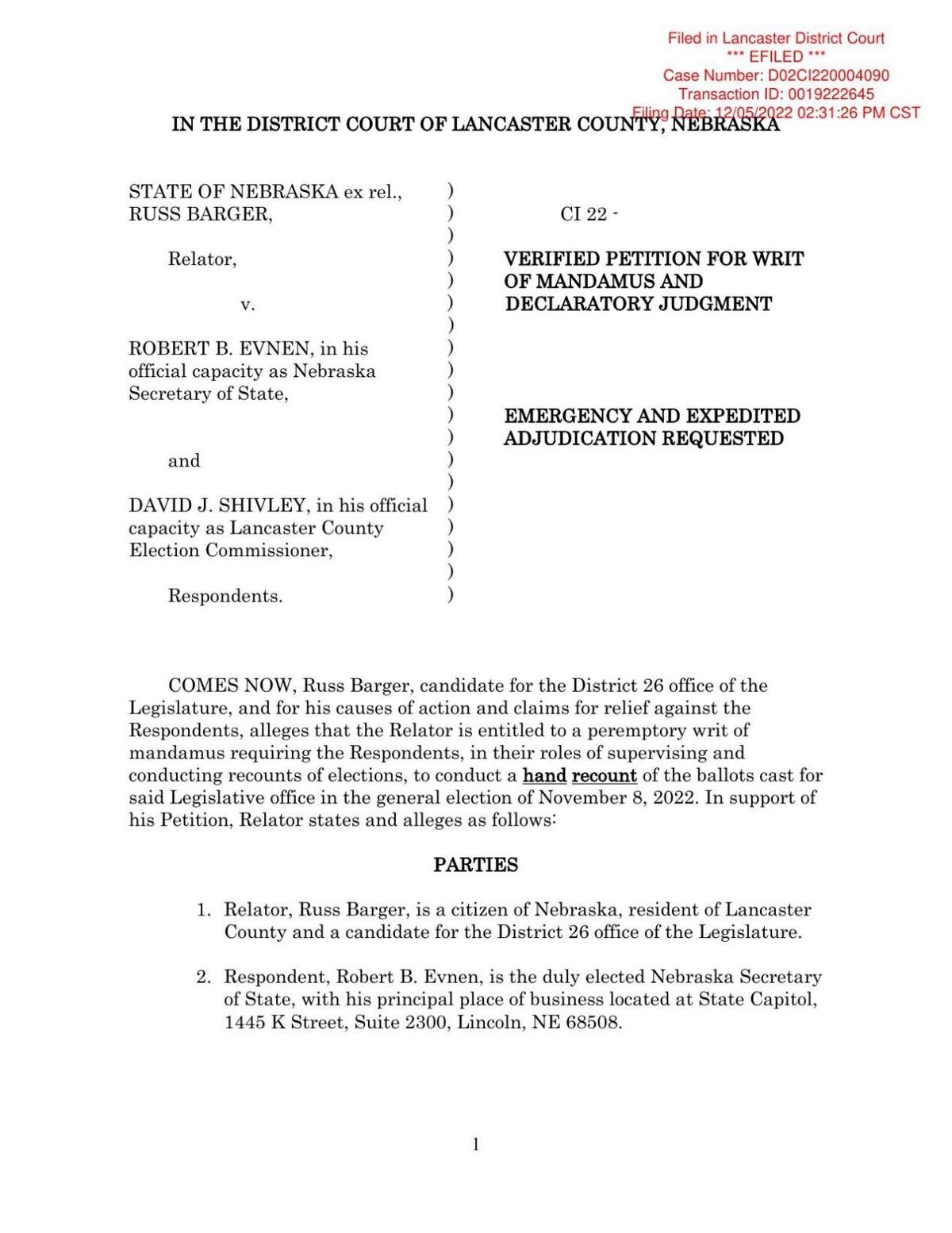 "Respondents have a clear legal duty to conduct a recount of the November 8, 2022, election for the District 26 office of the Legislature in the manner requested and provided for," Barger's lawsuit states, "to wit: a hand recount."

The lawsuit asks for a court to compel the Secretary of State's office to conduct a recount of the District 26 race by hand, as well as reimbursements for attorney's fees.

In an email to supporters, Barger said he needed to raise $25,000 to cover legal fees and the costs of conducting a hand recount.

"We are nearly certain a district court judge must order the Secretary of State to allow a hand recount and not simply run another machine count," the email states. "What is the point of a paper ballot if it can never be directly authenticated by a citizen in the entire process?"

The email also indicates the Nebraska Republican Party "is consulting on the writing of new election integrity legislation."

"The NEGOP will utilize their election integrity legislative subcommittee and their growing relationships with senators to implement this initiative," Barger's email states.

On Wednesday, Dungan and Nebraska Democratic Party Chair Jane Kleeb, said they had faith in the integrity of Nebraska's elections.

"By initiating legal action to require a recount by hand, Mr. Barger is simply furthering election conspiracy theories that have no place in Nebraska," Dungan said.

Kleeb said the state Democratic Party believes both the secretary of state and the Lancaster County election commissioner — both Republicans — ensured a fair election.

"The attempts of Republicans who lost their race to now litigate the issues using trumped-up claims is yet another stain on their party going all in on conspiracy theories," Kleeb said in a statement.

The Board of State Canvassers met Monday to certify the results of the Nov. 8 election.

Races that fell within the margin for an automatic recount will be re-tallied on Wednesday, with the final results set to be certified on Dec. 20. Barger's lawsuit asks the judge make a decision before that date.

The 108th Legislature will convene on Jan. 4.

Bacon photo from Tuesday/Web only

A second trial date with a new jury hadn't been set as of Wednesday.

A judge will consider if a legislative candidate can request a hand recount. The lawsuit was brought by Russ Barger, who lost to George Dungan for the District 26 seat.

Judge Kevin McManaman said the complaint from Russ Barger, who lost the District 26 race to George Dungan, was not properly filed with the court.