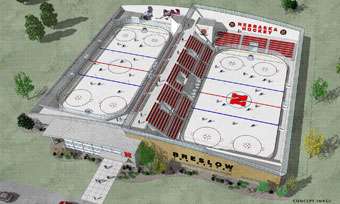 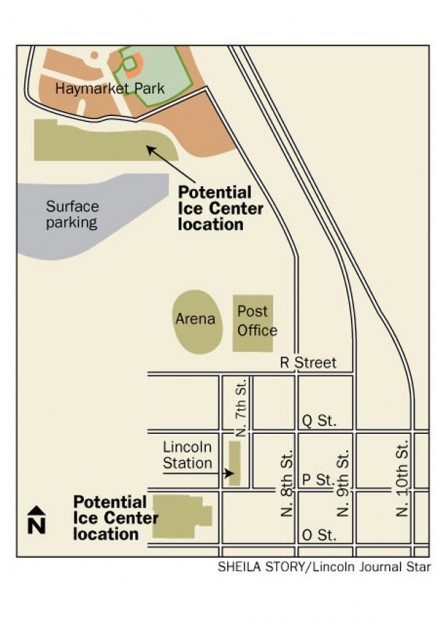 The Breslow Ice Center might be built next to the Haymarket Park baseball complex to take advantage of a large parking lot planned nearby.

But there's been no decision on where the indoor skating complex will be, according to city leaders.

The two-rink skating center has been shown just north of the Harris Overpass in drawings used before a spring vote on arena financing.

That spot was the preferred location at the time, but it wasn't a final decision, the city says.

People working on arena planning have been researching another potential location, near the baseball stadium in Haymarket Park and next to a planned 1,500-stall public parking lot.

But no decision has been made about the location, said Dan Marvin, program administrator for the West Haymarket project.

Information about the discussion leaked out prematurely. City leaders have not even talked with donor John Breslow, he said.

The overpass site has been the preferred location of Breslow, who is donating $7 million.

City staff have discussed the pros and cons of the two locations, Marvin said.

The location near the stadium, next to city maintenance buildings, offers plenty of free surface parking. And, the city would not have to follow higher design standards for building in the arena area. The architect estimates that would reduce ice center costs by $1 million to $4 million, Marvin said.

The ice center would be well-designed, but it would not have to be the same quality as buildings are expected to be near the arena, he said.

Construction could begin sooner because construction at the Harris Overpass site can't start until Burlington Northern Santa Fe tracks are moved in 2012.

There has also been discussion about the best use for the area south of the overpass.

Putting the ice center near the baseball stadium would free up two city blocks close to the arena for other development, Marvin said.

One disadvantage would be putting the center next to the maintenance shops.

"Aesthetically it's not the greatest area," Marvin said.

The fact that the maintenance shops are among departments that likely would move into the Experian building -- should the city buy it -- is simply a coincidence, Martin said.

The City Council is set to vote Monday on buying the building at 949 W. Bond St.

Breslow's gift, negotiated by the NU Foundation, is contingent upon the ice center being built close to the University of Nebraska-Lincoln campus.

The city and UNL Campus Recreation each have promised $1 million toward the center, and the NU Foundation will raise the rest of the funds.

Get complete information on the proposed downtown Lincoln arena.

Coverage of the Haymarket arena project

Get complete information on the proposed downtown Lincoln arena.