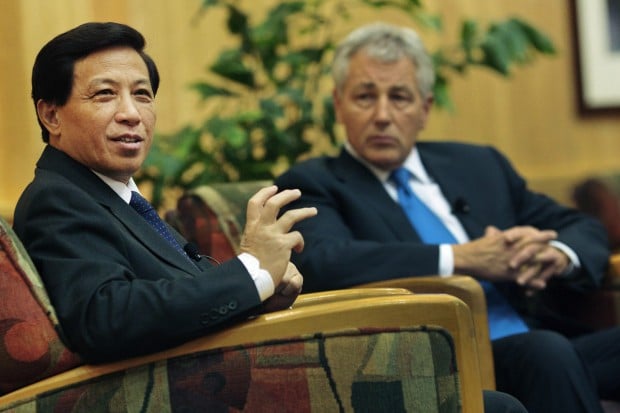 Chinese Ambassador Zhang Yesui (left) and former Nebraska Sen. Chuck Hagel answer questions from a gathering of students Wednesday at the Van Brunt Visitors Center on the University of Nebraska-Lincoln campus before speaking during an E.N. Thompson Forum on World Issues series at the Lied Center. CHRISTIAN RANDOLPH/Lincoln Journal Star 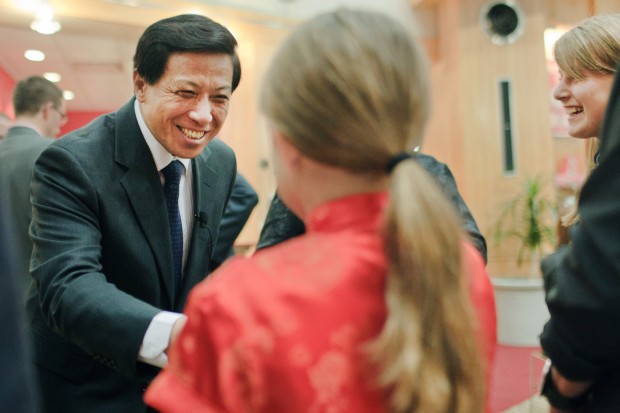 Chinese Ambassador Zhang Yesui and former Sen. Chuck Hagel pointed Wednesday night to the vital importance of the evolving relationship between the United States and China.

Hagel described it as "probably the most critical relationship for the 21st century."

Zhang said China and the United States have "never been so closely connected" through trade and other economic ties as they are now.

The U.S.-Chinese relationship "will grow more solid and stronger" as the two global giants cooperate on shared strategic interests such as counterterrorism, nuclear proliferation and climate change, he said.

However, neither Zhang nor Hagel shied away from the friction, distrust and competition that sometimes divide the two countries, speaking during a remarkably open and candid exchange of views during an E.N. Thompson Forum event at the Lied Center.

Economic self-interest and political differences fray the relationship at times, both said.

"Concentration on common interests" is the key to a developing and mutually beneficial relationship, Hagel said.

"We are far more likely to live peacefully and influence China if we are bound by strong economic ties and mutual geopolitical interests," he said.

"Engagement is not appeasement," Hagel said.

"This is the hinge relationship" of the century, he added.

Zhang, who became ambassador to the United States after serving as China's representative to the United Nations, said U.S.-Chinese economic ties are mutually beneficial.

"Each is the other's second-largest trading partner now," he said.

China has become the fastest-growing market for U.S. exports, he said, and that has created job opportunities in the United States.

"Chinese exports to the United States have met the needs of American consumers and saved them lots of money," Zhang said.

China has become "the major player in the world alongside the United States," Hagel said.

Zhang has described that relationship on his embassy website: "As the largest developing and developed countries in the world, China and the United States share extensive common interests and enjoy a solid foundation for cooperation."

The award was "political and probably against China," the ambassador said.

As China develops, Zhang said, it may be "able to do more to implement political reforms."

Zhang said China would like to develop more educational and cultural exchanges with Nebraska.

More than 500 Chinese students are enrolled at the University of Nebraska-Lincoln, he said.

Zhang, who will visit Memorial Stadium Thursday during a tour of Lincoln, also told the audience: "I am confident your football team will win back the national championship before very long."

Wednesday's event was this year's Charles and Linda Wilson Dialogue at the Thompson Forum.

Chinese Ambassador Zhang Yesui (left) and former Nebraska Sen. Chuck Hagel answer questions from a gathering of students Wednesday at the Van Brunt Visitors Center on the University of Nebraska-Lincoln campus before speaking during an E.N. Thompson Forum on World Issues series at the Lied Center. CHRISTIAN RANDOLPH/Lincoln Journal Star

Chinese Ambassador Zhang Yesui is greets and has a brief conversation with Julia McMahon-Cole (center) of Lincoln and her sister Hana McMahon-Cole entirely in Chinese before the ambassador met and answered the questions of a group of students Wednesday at the University of Nebraska-Lincoln. CHRISTIAN RANDOLPH/Lincoln Journal Star
© Copyright 2021 The Lincoln Journal Star, PO Box 81869 Lincoln, NE | Terms of Use | Privacy Policy
Powered by BLOX Content Management System from TownNews.com.
You don't have any notifications.