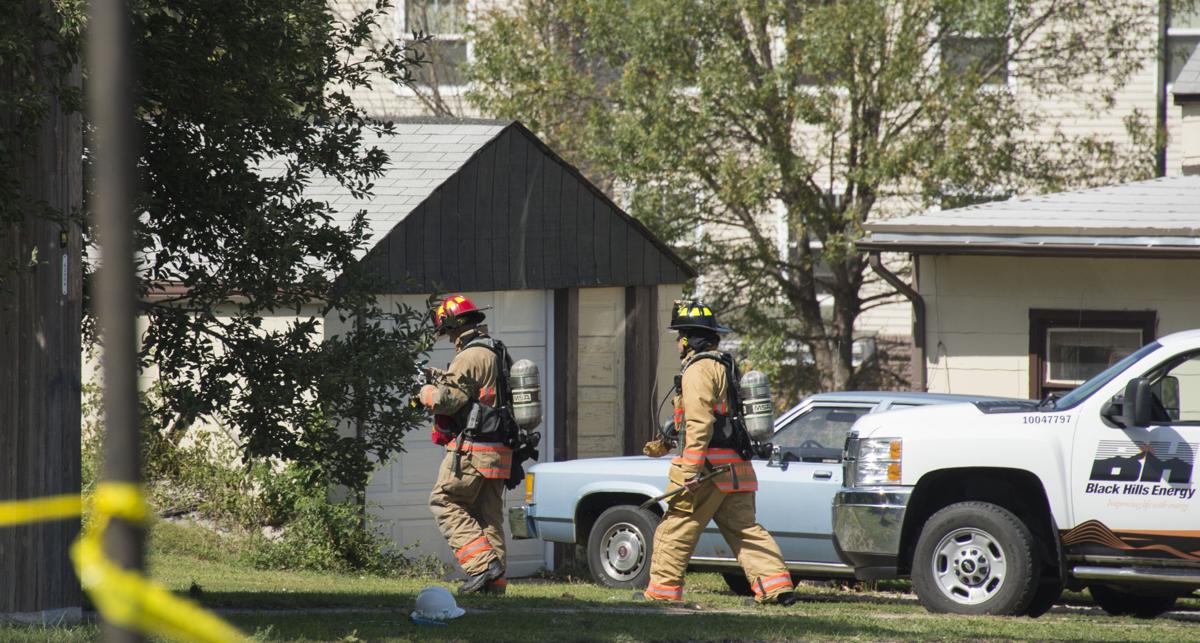 Lincoln firefighters check the area of a reported gas leak near 56th Street and Pioneers Boulevard in September. Crews have responded to more natural gas leaks and flammable gas calls this year than in all of last year.

A gas leak near 56th Street and Pioneers Boulevard in September drew a significant response, including police and fire units and utility providers.

Lincoln's hazardous materials crews have responded to more natural gas leaks and flammable gas calls this year than in all of last year, city data shows.

But public safety officials aren't exactly sure why.

Excavations in the city surged by 20 percent over last year, to more than 40,500 in 2016, according to Black Hills Energy officials.

Still the number of gas lines damaged by diggers in Lincoln has stayed steady.

Seventy-five gas mains and service lines were hit by diggers through September this year, just three more than in the same period last year, according to the utility.

"I think it is a number to celebrate," Black Hills compliance specialist Nathan Stewart said. "We still have a long way to go.”

Black Hills officials credit the stability of the numbers to efforts that have resulted in more diggers having gas lines marked before they dig as well as close communication between utility providers in the city.

That includes Allo Telecommunications, which is installing fiber optic cable across town to power ultra-fast internet.

Black Hills and Allo have worked closely together and have ongoing discussions about the telecommunications company's construction plans, Stewart said.

Allo crews are working in areas south of A Street between 40th and 98th streets, in some spots as far south as Pioneers Boulevard, according to its construction map.

Stewart and Black Hills Energy spokeswoman Brandy Johnson encourage people to continue doing so; it's one of the reasons the utility adds an odorant to the otherwise colorless, odorless gas.

"Always just err on the side of caution and let us check it out.”

Last week, Lincoln hazmat crews responded to a variety of gas calls including one where a van backed into and broke off a house's gas meter, Lincoln Fire and Rescue Battalion Chief Leo Benes said.

On Thursday morning, a plumbing crew installing new water service to a home in the 2200 block of Harrison Avenue hit an unmarked plastic gas main buried in the parkway between the sidewalk and street, Benes said.

And no one was injured.

Though safe in the pipes, the gas can be dangerous if it accumulates inside a home, officials say.

In July, a natural gas line left open in an Omaha home by former tenants ignited while a woman from the property management company was inside.

The explosion killed the woman, destroyed the home and damaged neighboring homes.

In Lincoln, Benes has only worked one explosion in his career.

Still these incidents, like the one on Thursday, can be time consuming.

Benes said he believes the utility's new tool will eventually save time.

Seven rigs responded to that call, including three fire engines, according to dispatch records.

Fire officials constantly evaluate the number of resources committed to these incidents, he said.

Benes and Casady said the increased number of calls haven't put undue strain on fire department resources because the incidents comprise only a small number of the 22,000 calls worked annually.

But they can eat up a bunch of time and inconvenience people like at a recent call near 45th and Van Dorn streets, which Casady described as an "all-day deal."

Homeowners doing their own digging can avoid a potential gas line by calling the diggers hotline, Johnson said.

Requests to locate lines can be made 10 days prior to an excavation but must be made at least two days before, she said.

Streets are closed near SouthPointe Pavilions where Lincoln Fire and Rescue was investigating a reported gas leak Wednesday morning.

A Street closed by gas leak

A Street is closed at 49th Street because of a minor gas leak at 4912 A St., Lincoln police said.

A north Lincoln house caught fire Sunday afternoon when a juvenile ignited some litter on the outside of the house, fire officials said.

A failed underground electrical cable took out power for almost 3,000 homes and businesses in central Lincoln for almost an hour Monday aftern…

Traffic will remain restricted to one lane in each direction on 27th Street between Woods Boulevard and Nebraska 2 until sometime Friday.

Natural gas customers can protect themselves against leaks

Natural gas customers across Nebraska will soon be able to request a special valve to prevent gas leaks due to damaged lines on their property.

Lincoln firefighters check the area of a reported gas leak near 56th Street and Pioneers Boulevard in September. Crews have responded to more natural gas leaks and flammable gas calls this year than in all of last year.

A gas leak near 56th Street and Pioneers Boulevard in September drew a significant response, including police and fire units and utility providers.