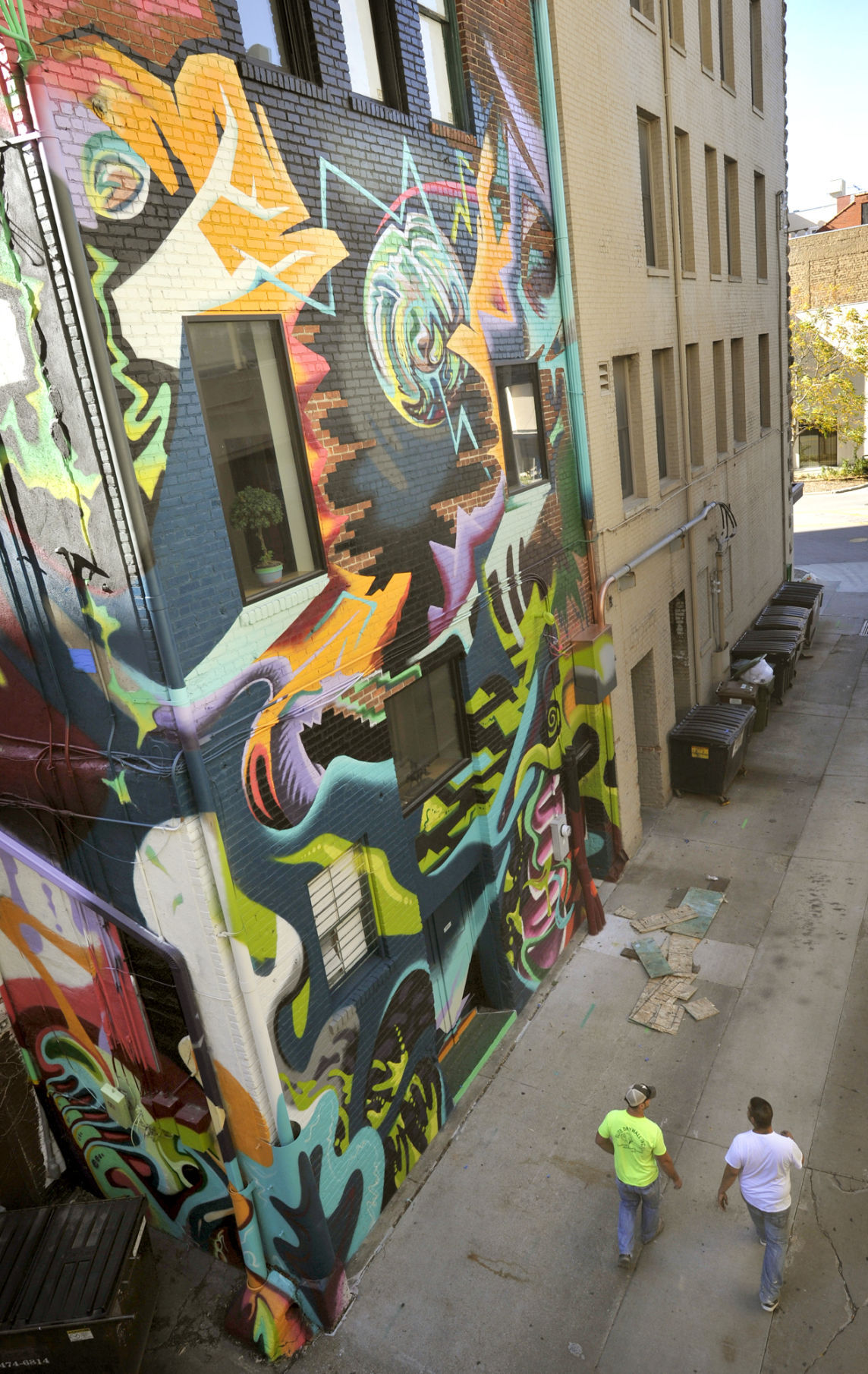 An improvised mural by Lincoln artist Spencer Pacheco is making its way around the Kiechel Fine Art Building, 1208 O St. The mural eventually covered two sides of the four-story building. 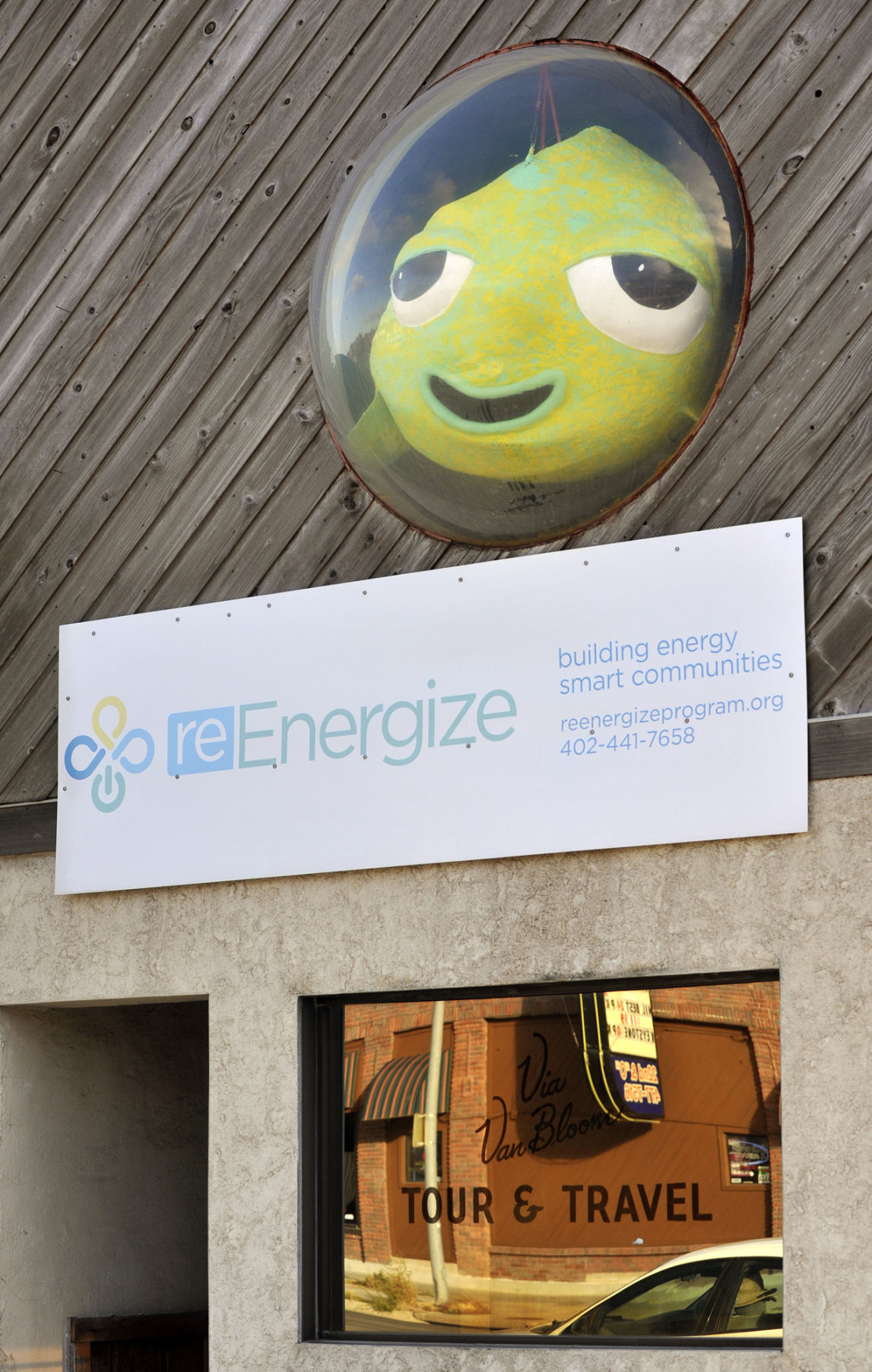 A puffer fish by sculpture artist Michael Steven peers from the second-story window of the former Via Van Boom travel agency at 2130 O St. The building was purchased by the city during the Antelope Valley project.

Art is just around the corner in downtown Lincoln.

Much of it is official work owned by the university or city: Torn Notebook at 12th and Q streets; Tower Square two blocks away; the new Gallery Alley in the Haymarket.

But there are occasional unofficial surprises, funky presents from the private sector.

Two of the newest are a fish in a window near 20th and O and wild wall murals on a four-story downtown stalwart.

A giant puffer fish stares out from the round bubble window on the second floor of the old Via Van Bloom building, 2043 O St., brightening up the block of tired old buildings.

Lincoln artist Michael Steven likes to think his whimsical creation, in the building next to St. Vincent’s thrift store, is smiling down on everyone walking the street, cheering them up.

“I enjoy doing stuff to make people laugh, make them chuckle,” said Steven, whose artwork is on display and for sale at Out of the Box, 366 N. 48th St.

His O Street fish is the world’s largest puffer, a clay mache sculpture that is six feet wide, though it looks smaller from the street, said Steven.

That round bubble window has been calling to him since he first moved to Lincoln three years ago  --  a perfect frame for a big-eyed fish.

Councilman Jon Camp helped get permission for hanging the fish in the building that was purchased by the city as part of the Antelope Creek project, said Steven.

The mural on the Kiechel Fine Arts Building, 1208 O St., is bright, bold and growing.

It’s “an improvised mural” that will eventually cover the north and east sides of the four-story building, said Spencer Pacheco, who started on the long-term project when he graduated with a bachelor of fine arts from the University of Nebraska-Lincoln last winter.

Buck and Lisa Kiechel wanted something creative on the blank wall of what used to be Dietze Music House.

They thought about an all white wall with announcements for shows. But then they saw Pacheco’s work, a piece of the mural covering the wall of Karen Kunc’s Constellation Studios at 21st and O.

Pacheco offered three images, and the Kiechels picked one, which gave the direction for his work.

Pacheco calls himself an abstract artist who works in an assortment of mediums -- watercolor, varieties of paint, ceramics, and other mixed media, including pyrography, which is wood burning.

“Kind of everything,” he said.

You can find his work at 402graphics.com and on Facebook.

Drivers are supposed to stop for pedestrians who want to cross the street at a crosswalk without a light. That’s the law, says David Nicholson…

Local attorney steps in when clients can't get liquor license

When owners of a new Lincoln restaurant went to get a liquor license they discovered the manager must be a U.S. citizen.

Lincoln Mayor Chris Beutler has been thinking about attractive and entertaining alleys for almost three decades.

The artist behind Illuminating Lincoln: Lighthouse stood with her fists together near her face at the top of the stairs at Haymarket Park Frid…

Cindy Lange-Kubick: Rocking art in Bishop Square, a mystery in the parking

Sculpture by Portland artist will be part of arena plaza

A 45-foot-tall metal sculpture, its colors ever-changing, will sit in the plaza in front of the Pinnacle Bank Arena.

A large, colorful mural faces out to the winding bike trail in Union Plaza. People lean against the bright public artwork and take pictures an…

An improvised mural by Lincoln artist Spencer Pacheco is making its way around the Kiechel Fine Art Building, 1208 O St. The mural eventually covered two sides of the four-story building.

A puffer fish by sculpture artist Michael Steven peers from the second-story window of the former Via Van Boom travel agency at 2130 O St. The building was purchased by the city during the Antelope Valley project.