Epilogue: Into the frozen water, a story of a lost brother and faith
View Comments
Share this
{{featured_button_text}}
1 of 2 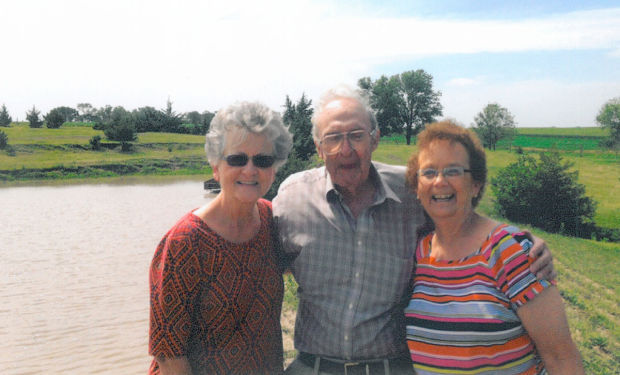 Sheila Abresch (left) and her sister Sandy Hensley stand by the pond where their brother Rex Hayes drowned on Dec. 2, 1956. They visited the pond near Shickley with area resident Richard Lichti, who was the first member of the volunteer fire department to reach the scene that day. 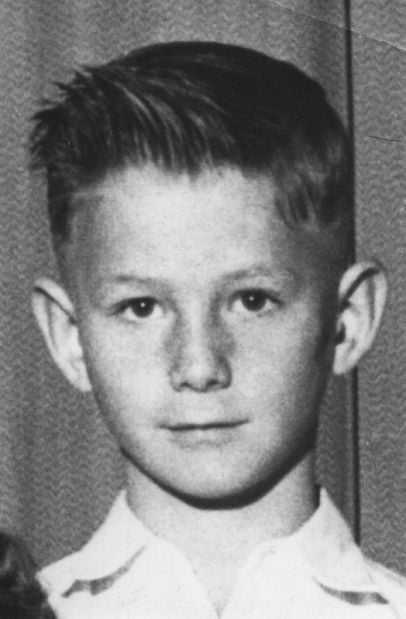 This is what she remembers about Rex:

That he was adventurous.

That he was slender.

That he was tenderhearted.

That he called her honey.

That the tips of his fingers were wrinkled when she looked inside the casket, as if they’d just pulled him from the water.

Sheila Abresch is a grandmother now, retired and living in a townhouse in Lincoln with her husband.

Her family never talked about that day, and for decades the story of his death was like a quilt with pieces missing.

Sheila knows she’ll never know everything that happened that Dec. 2, and she’s made peace with that, the way she made peace with her brother’s death nearly 20 years later, after she became a born-again Christian.

She remembers the moment, she said last week, sitting at her dining room table. She remembers it, chapter and verse.

From the breath of God ice is made, And the expanse of the waters is frozen.

Snow blanketed the countryside as five boys set off from a relative’s farmhouse to explore.

The cousins walked more than a mile before they came to the frozen pond, a dam on one side.

A day earlier, Rex Hayes and his brother John, 10, had left their home in Lincoln to go hunting with their Great Uncle Keith.

Sheila and her sister Sandy stayed in town with Keith’s wife, their Great Aunt June.

“I think they were giving my parents a weekend without the kids,” Sheila says.

For years, all Sheila knew about the accident was cobbled together from newspaper clippings and conversations with her sister, snippets of memory filtered through the mind of a child.

Sheila saved the clippings. “Boy Drowns in Farm Pond Near Shickley;” “Tragedy Strikes in Community;” “Lincoln Boy Drowns Near Ong;” “Card of Thanks.”

We wish to express our sincere thanks and appreciation for the Davenport Fire Dept., and all who helped, and for the many acts of kindness shown after the tragic accident that took the life of little Rex Hayes on Sunday.

Her parents never talked about what happened that Sunday or about Rex. Her stepfather died of a heart attack in 1962, her mother's health declined after the accident, she was 44 when she died in 1969.

By then, John had moved to San Francisco and joined the Marines. He married and raised a family. He rarely returned home, and his sisters never asked about his memories.

In 2009 he died, and Sheila and Sandy went to California for the funeral. One night, they sat visiting with their niece, John’s daughter. She held a cardboard box, photos from the old neighborhood and mementos from John and Rex’s Boy Scout days.

She said something that surprised them. My dad never got over the fact the boys were daring each other to go out on the pond.

The boys had urged each other on, Sheila found out later. Taking turns walking to the middle of the ice and then returning to the bank, oldest to youngest.

Three boys made it back.

And this spring she discovered something more -- another missing piece.

She’d attended a school function for one of her granddaughters. Nine-year-old Natalie had a classmate named Grace Lichti, they'd been friends since preschool. Sheila knew Grace’s parents, Amanda and Mitch.

Sheila asked where she was from. Sutton. What about Mitch? He grew up in Shickley.

So Sheila told her the story of Rex and the pond and how she’d long wondered about the details of that morning.

“She said, ‘Mitch’s grandfather is still living.’ She said she’d talk to him and see if he remembered anything.”

Sheila and her sister Sandy picked Richard Lichti up from his home in Shickley this summer.

He gave them directions to the pond, five miles southwest of town.

Richard was 26 in 1956. He ran a Skelly station. He was chief of the Shickley volunteer fire department, and he and his wife had a new baby.

He was home that Sunday when the whistle blew.

He was the first to arrive at the pond. He parked his car and ran to the top of the dam.

“One of the kids had to go about a mile to get help, and my understanding was that this boy was able to hold onto the ice for quite a while.”

By the time he arrived, there was just a hole in the ice, and people coming from everywhere to help.

He remembers the young guy who worked for the railroad. “He was a good swimmer so we tied a rope on him and put him into the water.”

Three times he went in and came out empty-handed.

They sent someone for a boat. Men broke up the ice and they dragged the bottom.

They used a resuscitator Richard hauled from the fire house.

“I remember I thought it was hopeless, but you never know.”

Richard is 82. Mitch is his grandson, Grace his great-granddaughter.

Sheila and Sandy had their picture taken with Richard that July day, and they took photos of the pond where their brother died.

It was bigger than Sheila thought it would be.

Sheila and her husband have 10 grandchildren. Their photos fill the house.

She doesn’t remember pictures of Rex at their childhood home on D Street. It was a different time, she says.

And grief was quieter. She remembers being at the funeral, her family shielded behind a sheer black cloth -- they could see the mourners, but no one could see them.

She’s glad she knows more about that day, amazed that a simple question -- Where are you from? -- led her to the man who tried to save Rex.

It was a God thing, she says.

Her faith is what has made her accept Rex’s death. Her belief that God is sovereign.

From the breath of God ice is made and the expanse of the waters is frozen.…

“God is the one who froze the water of that pond.”

Stuck under a moving semi: 'I hope he stops soon'

They were side by side, crossing the dark of western Nebraska at 75 mph, the semi in the left lane, Maya Weil and her Mercury Cougar coming up…

Cindy Lange-Kubick: Miles of Tootsie Rolls to go before he sleeps

Tyler York has been collecting and connecting Tootsie Roll wrappers for nearly five years, working toward a Guinness World Record.

Sheila Abresch (left) and her sister Sandy Hensley stand by the pond where their brother Rex Hayes drowned on Dec. 2, 1956. They visited the pond near Shickley with area resident Richard Lichti, who was the first member of the volunteer fire department to reach the scene that day.