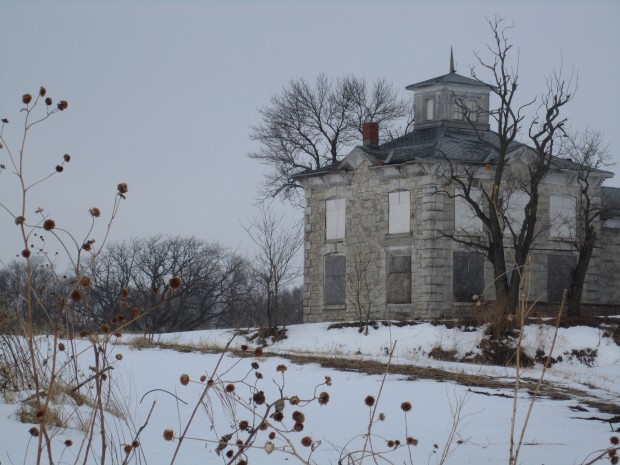 The Beetison House has been vacant and boarded up for more than a decade. It was placed on the National Register of Historical Places in 1977. (Jordan Pascale / Lincoln Journal Star) 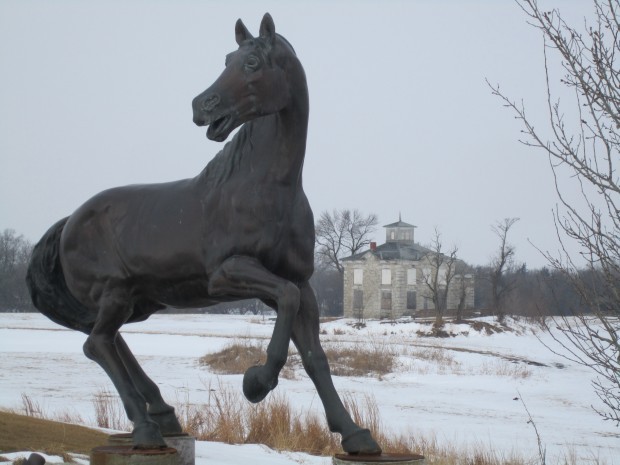 The Beetison House is in the Iron Horse development south of Ashland. The home is near an entrance with a horse statue. (Jordan Pascale / Lincoln Journal Star) 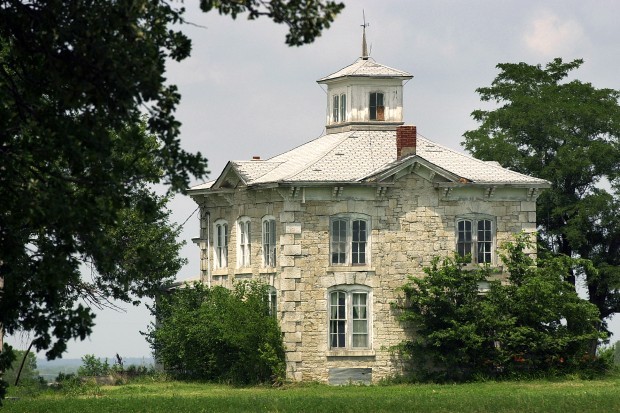 The Beetison House, pictured here in 2001, is now surrounded by the Iron Horse Golf Course near Ashland. (LJS file) 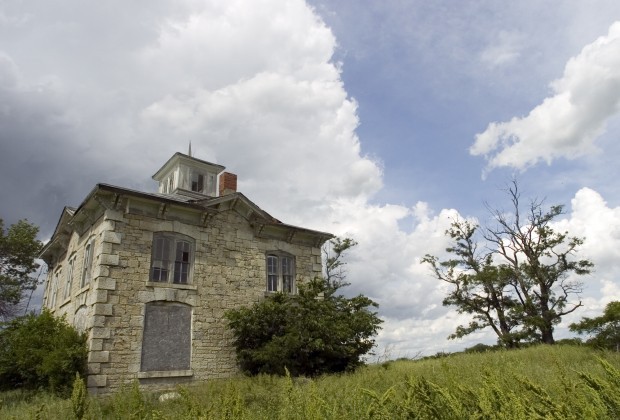 The Beetison House has been boarded up ever since squatters were found to be living in the home. The house, pictured here in 2007, has been vacant since 1999 and is still waiting to be sold. (LJS file)

It was built in 1874 and lived in by five generations of the same family. The cupola on the limestone home near Ashland once was a lookout for Native Americans, but now you can see the Capitol to the west and Omaha's Woodman Tower to the east. In 1977, it was placed on the National Register of Historic Places, and in 1999, it was sold. For the past decade, however, the historical property has sat vacant, windows boarded up, waiting for the right time.

Nick Beetison has never taken his daughter to see his childhood home.

The place where his dad built a tree swing for him and his brothers, where he would hunt in the back pasture and, in high school, where he would take girls on horseback rides to show them the ruts of the Ox-Bow Trail.

The home where he would break off chunks of the limestone because he saw gold in the rock.

He would bring it in to show his grandma, and she would laugh.

But the home, built in 1874 and considered one of the oldest houses in Nebraska, is long past its prime. Sold in 1999 to housing developers Boyer Young, it has sat abandoned and boarded up ever since.

That's why Beetison can't take his daughter to see it.

"It's pretty disappointing ... it's sad," the 37-year-old said. "All these childhood memories being around there and to see it boarded up and wasting away."

An Englishman on the plains

If you take Interstate 80, exit near Mahoney State Park, follow Highway 66 north for a mile, the road bends -- and there it is, right in the middle of your windshield.

The home's original owner was Israel Beetison, an Englishman who moved to Massachusetts in 1845 and later moved to a homestead in Nebraska in the 1860s.

He commissioned local masons to carve 18-inch-thick limestone blocks out of a South Bend and Louisville quarry.

A team of horses and wagons dragged the blocks nearly 10 miles across what is now I-80 to the homestead.

A hand-written document from 1977 found in in the State Historical Society said the home was built so solidly it could last "for centuries."

That document was part of the application and review of the home for the National Register of Historic Places.

"The house stands as one of the finest examples of Italianate architecture style in Nebraska," the document states.

Along with the historical value of the home, the area also is rich with history -- Ox-Bow Trail ruts run through the land, and 900-year-old Native American burial grounds were discovered there in 1937, according to state preservation documents.

According to family lore, Pawnee Indians used to come to the house in the early days to trade blankets for eggs, chickens and other goods.

The home was passed down through four generations before things started to change in Ashland in the '90s.

The land was bought up for a golf course and housing development. The family, who ranched in the area, initially didn't want to sell, but then they received a reasonable offer, so they sold.

For the past 12 years, it has sat vacant and boarded up. No one has been in there for years, owners say.

Drywall is gone. There's no working plumbing or electricity -- Nick's family heated it with a wood stove. Parts of the ceiling are missing. Some of the furniture remains.

So what happens when a listing on the National Registry of Historic Places goes abandoned?

Not much, according to Bob Puschendorf, a state historic preservation officer with the Nebraska State Historical Society.

"Nothing says that an owner has to maintain the property," Puschendorf said.

Although the house has gone into a minor state of disrepair, the home is in no danger of being torn down -- it cannot be without consent from the Ashland City Council.

Developer and owner Mark Boyer hopes it can be restored, but it would take plenty of work.

"Really, it's just a limestone shell," Boyer said. "It'd take a hundred or hundred fifty thousand to get it back into liveable shape."

In 1999, Mark Boyer and Tim Young, developers from Omaha, bought land near Ashland for a new high-end subdivision -- Iron Horse.

Sales there have been steadier than similar markets in Omaha, Boyer said, yet the subdivision hasn't matured as fast as Boyer originally thought.

More than 150 homes had been built and expansion to Phase III was in the works when the housing market crashed.

"It definitely delayed our timeline," Boyer said. "Hopefully, we get back on track in the next year or two."

Slowed, along with the grand scheme, were the plans for the Beetison House, which is in the last phase of the development.

They thought about using it as a restroom and concession stand for golfers or moving it to the entrance for the subdivision office, but that never came to fruition.

The house was to go up for auction in 2000 and then again in 2007, according to newspaper reports -- but those auctions never happened.

In 2001, squatters broke into the home. Needles were found scattered around the premises.

The locks were replaced, windows boarded up and Boyer has people check on the home every once in a while.

He still gets calls rom prospective buyers -- he has a list of more than 60 people, he says.

Nick Beetison now lives in Eagle and runs his own home improvement business.

He often thinks about buying the house back -- it's just a matter of money. Maybe someday he will.

"I talk about it with my brothers and dad all the time," Beetison said. "If I could afford to buy and refurbish it outright, I would and move back there.

"There's just a certain fondness of a home where you grew up. You get attached to it."

A dozen years ago, it looked like a heart-shaped spud was a symbol of true love at Tina's Cafe. It wasn't. But now another couple linked by Ti…

Epilogue: Trying not to let wounds linger after Greenwood shooting

A gunman broke down a rural Greenwood couple's front door on a March afternoon 11 years ago. Not long after, a cop broke down the back door. In the minutes in between, Les and Retha Debrie came close to dying. Today, they're focused on living.

House is home to Beetisons

Originally published on June 23, 1981 in the Lincoln Star.

Epilogue: Life after the pink slip

Before the great recession even hit, Pam Wagner became a statistic. She was laid off. Out of work. Jobless. She gave herself six months to find a job and landed one in three. Life does go on, she says.

Friday marks the 25th anniversary of the space shuttle Challenger explosion. For Lincoln East journalism teacher Jim Schaffer, that day remains especially vivid -- it could've been him on that shuttle.

See more in the Epilogue series

The Beetison House has been vacant and boarded up for more than a decade. It was placed on the National Register of Historical Places in 1977. (Jordan Pascale / Lincoln Journal Star)

The Beetison House is in the Iron Horse development south of Ashland. The home is near an entrance with a horse statue. (Jordan Pascale / Lincoln Journal Star)

The Beetison House, pictured here in 2001, is now surrounded by the Iron Horse Golf Course near Ashland. (LJS file)

The Beetison House has been boarded up ever since squatters were found to be living in the home. The house, pictured here in 2007, has been vacant since 1999 and is still waiting to be sold. (LJS file)
© Copyright 2020 The Lincoln Journal Star, 926 P Street Lincoln, NE | Terms of Use | Privacy Policy
Powered by BLOX Content Management System from TownNews.com.
You don't have any notifications.