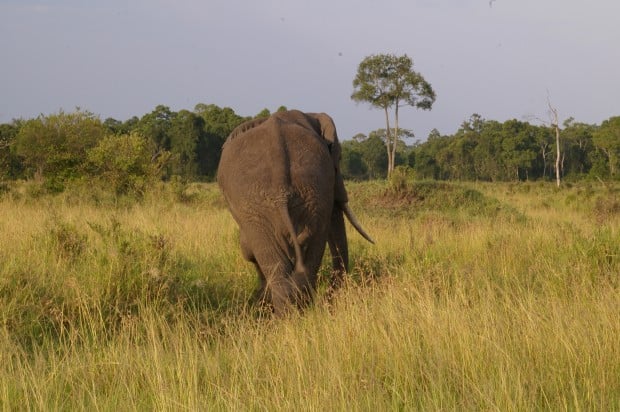 An elephant mother and calf are photographed in South Africa. Nearly half of the elephants in U.S. zoos are infertile, due in part to obesity. That infertility is leading to a national crisis. Estimates are elephants in zoos could be extinct within 50 years if something is not done to address the animals' health issues. 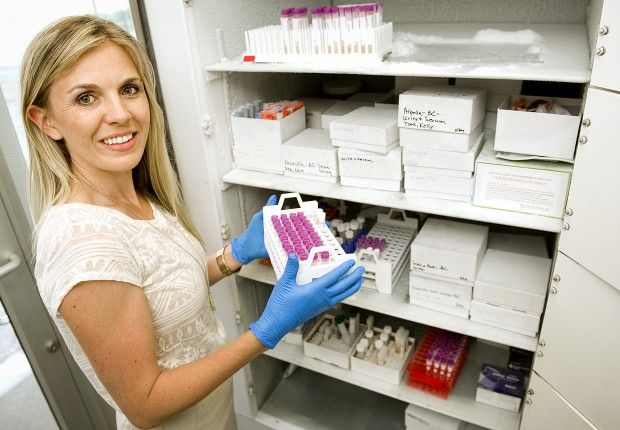 Wildlife endocrinologist Kari Morfeld stands in front of a freezer that holds more than 3,000 blood specimens from 290 elephants living in 74 U.S. zoos. She is researching why elephants in captivity are so overweight and the health problems that come with that obesity. Her lab, the Wildlife Conservation Research Center at the Lincoln Children's Zoo, is the first of its kind in the world.

Kari Morfeld’s desk is littered with hundreds of 8-by-10 glossy photographs — each a close-up of an elephant’s derriere.

Her vast collection includes butts from South Africa and from the 290 elephants living in 74 zoos accredited by the Association of Zoos and Aquariums.

Morfeld is a wildlife endocrinologist and head of the new Wildlife Conservation Research Center at the Lincoln Children’s Zoo — the world’s first facility to focus on the metabolic health of zoo animals.

Her research on pachyderm posteriors — and blood — holds far-reaching implications for the future of elephants.

Perhaps all other animal species.

The work is a collaboration of the Smithsonian Conservation Biology Institute, Nebraska Wesleyan University, the Lincoln Children’s Zoo and her doctoral dissertation at George Mason University.

In a nutshell, Morfeld’s research finds that elephants in American zoos are facing the same health crisis as American Homo sapiens -- cardiac disease, arthritis and infertility -- all brought on by the hormonal changes from obesity.

The pachyderm problem is dire.

“In the next 50 years, the captive population will not be viable and will be extinct. In 50 years, there will be no more elephants in zoos,” Morfeld said.

“The last thing they want to do in zoos is take animals from the wild to stock zoos. We have to take care of the ones we have. We want the population to be self-sustaining.”

Currently, 45 percent of elephants in U.S. zoos are infertile. For every five zoo elephants that die, only three are born. The No. 1 top killers of zoo elephants: heart disease and arthritis.

Obesity -- also the No 1 concern for human health.

A native of Creston, Morfeld spent much of her childhood outdoors, hanging out on a relative’s farm. She’s always loved animals, nature and wildlife.

She enrolled at Nebraska Wesleyan University with the dream of becoming a veterinarian.

Two things held her back:

“I’m highly allergic to most animals, and I don’t like the idea of putting animals down,” she said.

She toyed with becoming a medical doctor and working with humans. But that didn’t hold the same appeal.

“I wanted to do something with animals that hadn’t been done yet,” she said.

In her junior year at NWU, she landed an internship in the reproductive biology department of Omaha’s Henry Doorly Zoo. After graduation, she stayed on as the zoo’s lab manager and enrolled in the University of Nebraska-Lincoln’s animal science master’s program, specializing in reproductive physiology.

To go anywhere in her chosen career,  she knew she needed a doctorate. Everyone told her to work for the Smithsonian Institution.

“I sold everything I owned and drove to the Smithsonian in Washington, D.C.,” she said.

For six months, night and day, she studied lion hormones and lion reproduction. Then Janine Brown, a world-renowned reproductive physiologist and director of the endocrine lab at the Smithsonian, asked Morfeld to be a lead scientist in her elephant obesity study.

The single mother returned to Nebraska with hopes of finding a zoo that would welcome her and her research.

“I barely said two sentences, and I knew they were on board,” Morfeld recalled.

And the Children’s Zoo doesn’t even have elephants.

“It totally rounds out the zoo’s mission as a fully accredited AZA institution -- animal welfare and the science behind it,” said John Chapo, the zoo's executive director.

Although a small zoo, the Lincoln Children’s Zoo long has been active in animal conservation, earning itself national attention for achievements in propagating endangered and threatened wildlife species.

“What we’ve not been deeply involved in is the science and scientific research,” he said.

“Emotions are fine, but good science makes great decisions. We are really excited about elephant butts.”

The study, in collaboration with the Smithsonian Conservation Biology Institute, looked at numerous variables in the lives of captive elephants versus their counterparts in the wild -- including social status, management techniques and climate.

“The only difference -- a high body-mass index,” Morfeld said.

But there are no tools to define what was a fat elephant -- or what made an elephant fat.

And it is impractical to wrap tape measures around elephants’ torsos.

Zeroing in on pachyderm posteriors, she developed a scoring system: No. 1 for very thin up to No. 5 for obese. Fat depth is measured along the animals’ pelvic bone and backbone, as well as the visibility of the rib cage.

Unlike humans, where muffin tops and beer bellies are dead giveaways for overindulging, an elephant’s stomach volume varies significantly over the course of a day, Morfeld said.

“When we look at the bone structure, we see actual fat and not just volume,” she said.

In fat elephants, there is little distinction between the body and the backbone; the hip bones are not visible.

As with humans, obese elephants are more prone to health problems associated with “body condition” -- a far more politically correct and acceptable term than fat or obese, Morfeld said.

“The No. 1 killer of elephants in zoos is cardiovascular disease. The only way to tell that is through an autopsy,” she said. “The second leading cause of death is arthritis.”

Morfeld’s research mirrors medical findings in humans. In a freezer at minus-80 degrees Centigrade, she has collected more than 3,000 blood specimens -- several for each of the 290 zoo elephants in America. She measures triglyceride, cholesterol, insulin and glucose levels, comparing them to elephants in the wild as well as to themselves over the course of time.

That provides a clear reference for which has cardiovascular disease and which is at risk for it, Morfeld said.

“There is a strong connection between high body size and high triglycerides,” she said. “Same as there is in humans and dogs and cats.”

Proving that was easy. Figuring out what to do about it is the tough part, she said.

“We have to provide practical solutions,” Morfeld said.

“You don’t want to take their food away. There are no treadmills large enough for elephants. You can’t convince an elephant who is overweight that it should walk more,” she said.

But you can get an elephant to walk more for food. Using GPS collars, scientists tracked elephants in the wild and found they traveled only to where there was food.

So Morfeld has encouraged zoos to spread out the elephants’ food. Make them search for it.

She also has discovered that elephants in captivity not only eat more and move less, but they eat very well.

In the wild, elephants eat whatever is available.

In zoos, they are fed produce, fruit, grains and hay. And most zoos feed their elephants the highest quality of hay -- hay that is high in volume and calorie-rich, Morfeld said.

Zoos shouldn’t take away the volume, but they can feed elephants with a combination of hay and straw that is not as high quality.

“They still get the nutrition, but not the excess weight,” Morfeld said.

What has been proven is that, just as with humans, even modest weight loss brings on significant health improvements.

“We need to take animals at a No.5 and reduce their weight to see if it re-initiates the reproductive cycle,” she said.

In humans, a 5 percent loss of body weight will restart the reproductive cycle, she said.

The ramifications of her metabolic research goes beyond elephants.

“It sets the model for other species -- giraffes, rhinoceroses, gorillas,” she said.

Long term, provided she can secure funding, Morfeld sees the Wildlife Conservation Research Center offering scientific metabolic evidence and direction for bettering the welfare of all animals in zoos by studying their blood, urine, feces and hair.

“Zoos spend millions of dollars on elephant facilities with no background on what is the best facility for elephants' health and welfare,” Morfeld said.

As with many scientists, her work is dependent upon funding -- most of which comes through grants.

But in the end, the bottom line is responsibility.

“Humans have a choice about their lifestyle. We give elephants a lifestyle. It is only fair to give them a healthy lifestyle. So far, we are failing them,” Morfeld said.

“Our responsibility -- if we house animals in zoos -- is to give them the best life possible.”

Lincoln and Omaha zoos will feature new faces this weekend.

Lizards, porcupines, frogs and Larry the Cable Guy's "Zoofari" are all new this year at the Lincoln Children's Zoo, which opens for the season Saturday.

An elephant mother and calf are photographed in South Africa. Nearly half of the elephants in U.S. zoos are infertile, due in part to obesity. That infertility is leading to a national crisis. Estimates are elephants in zoos could be extinct within 50 years if something is not done to address the animals' health issues.

Wildlife endocrinologist Kari Morfeld stands in front of a freezer that holds more than 3,000 blood specimens from 290 elephants living in 74 U.S. zoos. She is researching why elephants in captivity are so overweight and the health problems that come with that obesity. Her lab, the Wildlife Conservation Research Center at the Lincoln Children's Zoo, is the first of its kind in the world.