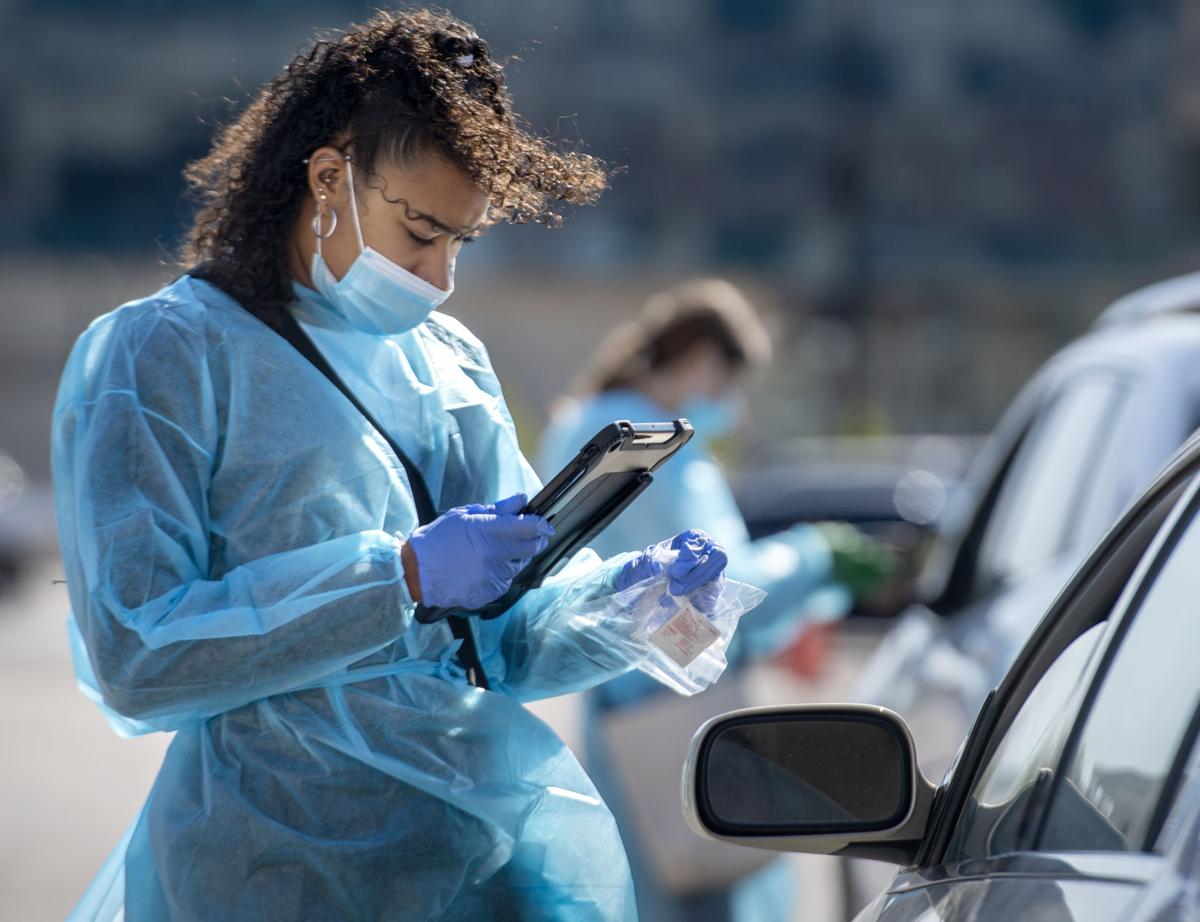 University of Nebraska-Lincoln student Tysa Dethloff hands a saliva collection tube to a participant in a drive-thru COVID-19 testing site outside Memorial Stadium. 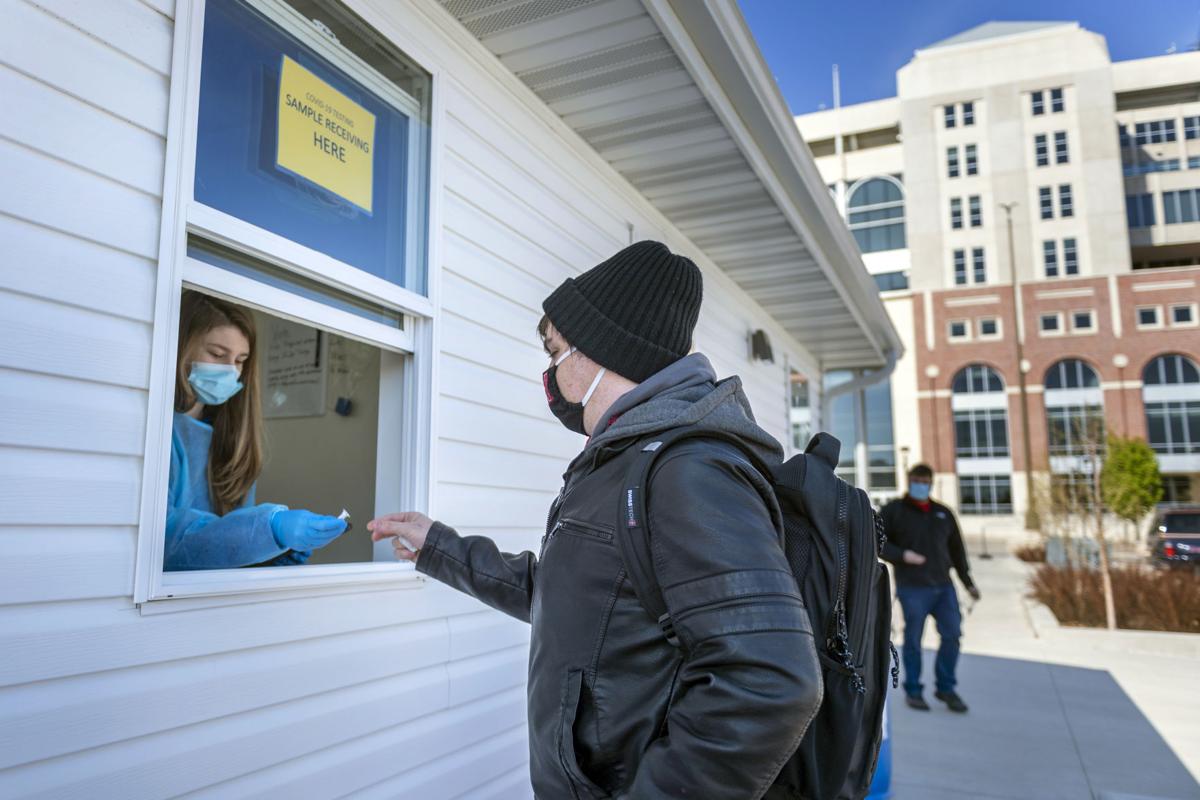 The weekly positivity rate of COVID-19 cases at the University of Nebraska-Lincoln has dropped from 10% when classes were winding up last fall to 0.72% as students wrap up the spring semester.

Though it’s difficult to pinpoint specific reasons behind the vastly improved numbers, vice chancellor for research and economic development and COVID-19 Task Force member Bob Wilhelm believes the three rounds of required testing at the beginning of the semester led to reduced transmission. Since then, about 20% of the student population has been selected for random testing on a weekly basis, and about 1,500 students voluntarily participate in the saliva-testing program each week.

Students also must use the Safer Community app to access buildings to ensure COVID-positive individuals do not spread the virus in the classroom. Those efforts, along with mask-wearing and vaccinations, have helped UNL to hold the daily average of new cases to near 10 and the weekly positivity rate below 1% since early February.

Across the entire county, the positivity rate has hovered near 4% over recent weeks.

“Our biggest effort has been to make sure that we can offer as much of a student experience, an academic experience,” Wilhelm said. “I think we did quite well at that — and in a safe way.”

In January, UNL’s new saliva-testing program found about 215 cases, according to the Lancaster County COVID dashboard, and officials isolated those individuals in dorms at the start of the spring semester.

Despite the increased testing, UNL has only reported 567 positive cases through saliva tests during the spring semester, according to the Lancaster County dashboard.

Wilhelm believes the mandatory tests and isolation efforts prevented the spread of COVID among students and faculty who may have unknowingly contracted the virus over winter break. Since then, UNL’s saliva-based testing protocol has helped to track any emergence of COVID.

Students and faculty can schedule an appointment for a saliva test via the Safer Community app and then be notified the next day whether they had a positive test.

In addition to random selection, Wilhelm said hundreds of students voluntarily submit to testing. Some need to be tested for campus-based programs, such as working at the child care center. But other students are tested in case they contracted the virus.

Though thousands of tests are conducted each week, Wilhelm said the on-campus lab has kept up with testing each saliva sample. The lab also has the ability to track virus variants.

“I feel more comfortable knowing that it's not an option to get tested,” freshman Molly Haug said. “You have to if you get selected, which makes it nice knowing that people who have it aren't going to be out and about.”

Wilhelm and Reed were unaware of students having to be hospitalized due to the coronavirus but said at least one faculty member had been hospitalized.

UNL did see a slight uptick in cases at the beginning of April, which Wilhelm believes is possibly related to students who decided to travel even though UNL did not incorporate its customary spring break in its March schedule.

“We're paying a lot of attention to that,” he said.

UNL is not requiring vaccinations, though student workers and faculty have had the opportunity to receive a vaccine. Additionally, the Lincoln-Lancaster County Health Department allowed UNL students to register for a vaccine between April 8 and April 11 and has scheduled the first on-campus vaccination clinic for Tuesday.

In addition, Wilhelm suspects that several students will receive a vaccination in their hometown or as part of the Federal Pharmacy Program.

Looking ahead, officials expect the fall semester to have fewer remote classes. In a letter to faculty and staff March 5, Chancellor Ronnie Green wrote that he expects classrooms will operate at full capacity, but specific guidelines, such as mask-wearing, will be determined based on public health guidelines at that time.

It's also unclear what testing plan, if any, will be in place next fall.

“Mostly what we're trying to do is make sure that we get people well and keep people safe,” Wilhelm said.

Nebraskans find that practical steps may minimize side effects from vaccine

With Nebraskans lining up for the COVID vaccine, chatter around who had what side effects from the shots — a fever or sore arm vs. none at all — have become commonplace.

The Lincoln-Lancaster County Health Department also reported 51 new cases of COVID-19, bringing the cumulative total of cases in the county to 30,493, 31 of which are of variants.

'He was my once in a lifetime. I was lucky.'

Randy Brinkman, 62, of Lincoln died of COVID-19 on Nov. 30. He loved his family, old cars, working hard and writing love poems to his wife.

Health officials are seeing some people who initially said they were not going to get vaccinated make a different decision. The state also appeared to be avoiding a third surge, with per capita cases for the week well below the national average.

Group sizes no longer will be limited at Lincoln restaurants and bars, and youth sports attendance restrictions lifted

The risk dial moved to low yellow, the lowest level it's been since it was created. A new directed health measure also will remove attendance restrictions on youth sports and relax mask requirements at private workplaces.

The mother of one of the inmates affected, Kimberly Koehlhoeffer of Fairfield, said doctors told her son he and the others had received six times the recommended dose.

Masking up outside may help Nebraska allergy sufferers find relief

Trees, with the exception of oak, have been pollinating in high numbers for about six weeks, an allergist said.

The former Huskers football coach and athletic director and U.S. congressman will deliver his address -- "Begin With the End in Mind" -- at both the 10 a.m. and 4 p.m. ceremonies on May 8 at Memorial Stadium.

"For many, this opportunity to live more freely is one of joy and relief," Chancellor Ronnie Green wrote in an email to the UNL campus community on Friday. "It's also a moment that came sooner than some expected."

Other prizes include $250 in Husker gear, a semester pass to the Outdoor Adventure Center, monthly massages at Campus Rec and free ice cream from the Dairy Store for a year.

University of Nebraska-Lincoln student Tysa Dethloff hands a saliva collection tube to a participant in a drive-thru COVID-19 testing site outside Memorial Stadium.