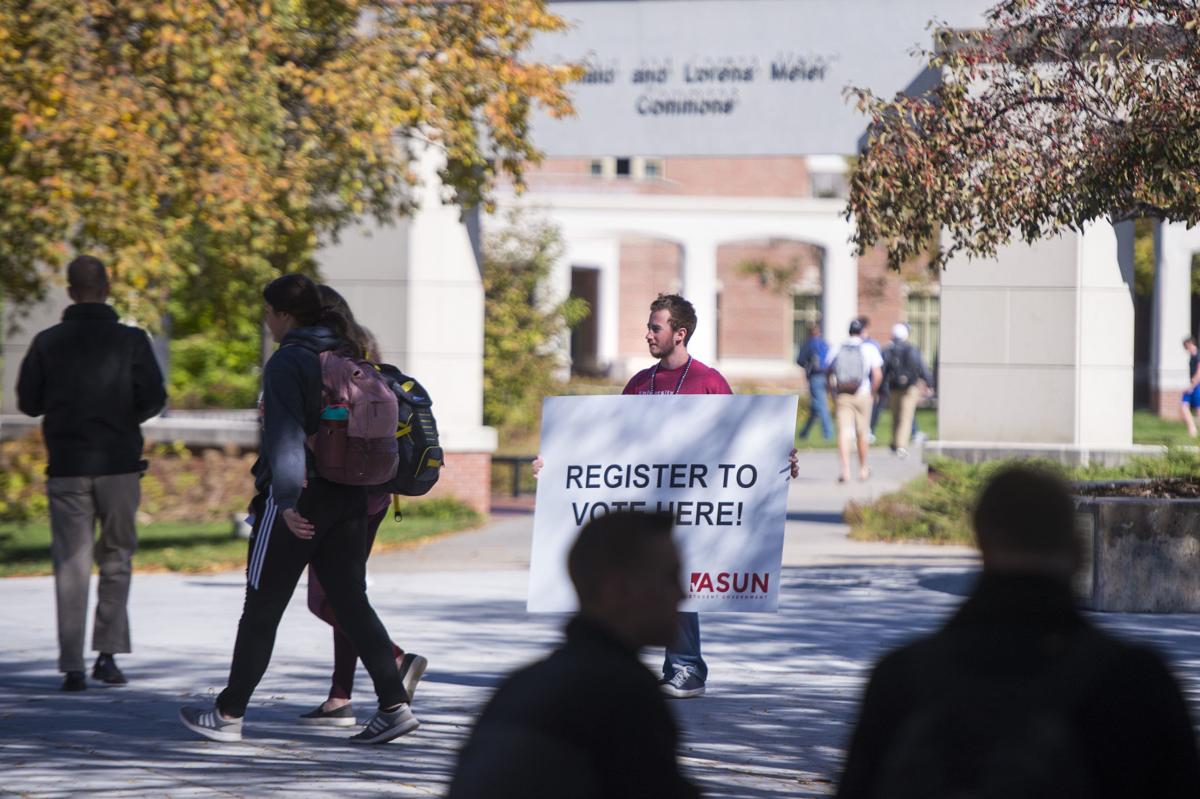 Jackson Belva interacts with students at the University of Nebraska-Lincoln to get them registered to vote last week. 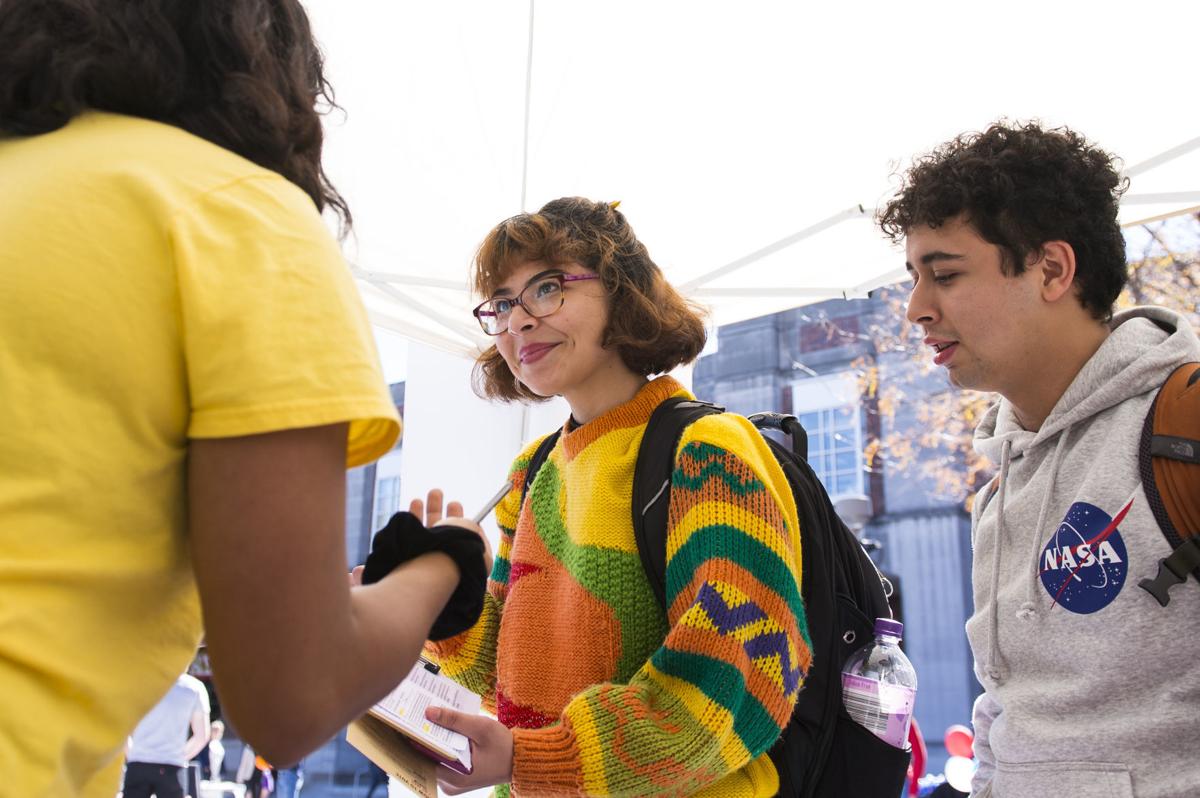 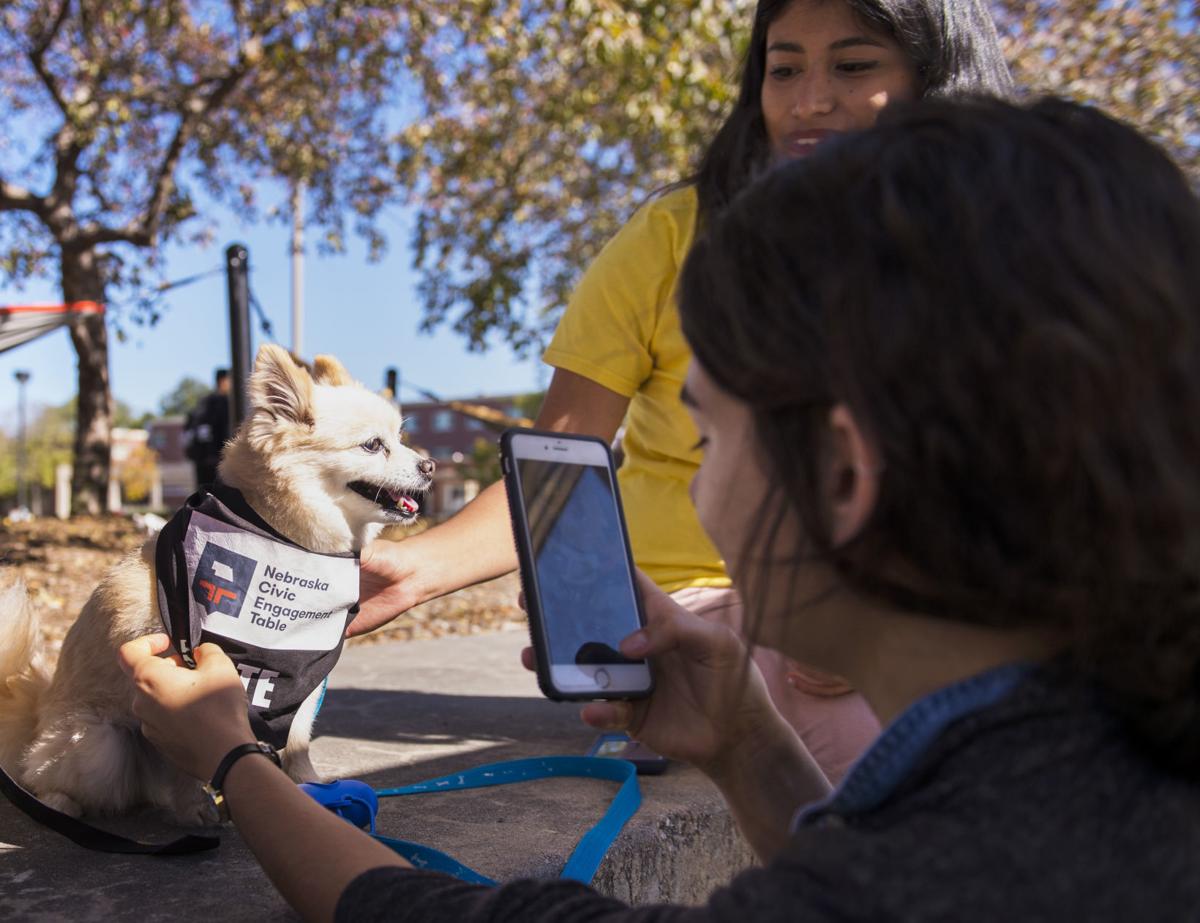 Simba gets his photo taken by UNL student Oria Simoini during an event to get students registered to vote Thursday outside the Nebraska Union. This November's election will be Simoini's first election since becoming a naturalized citizen. 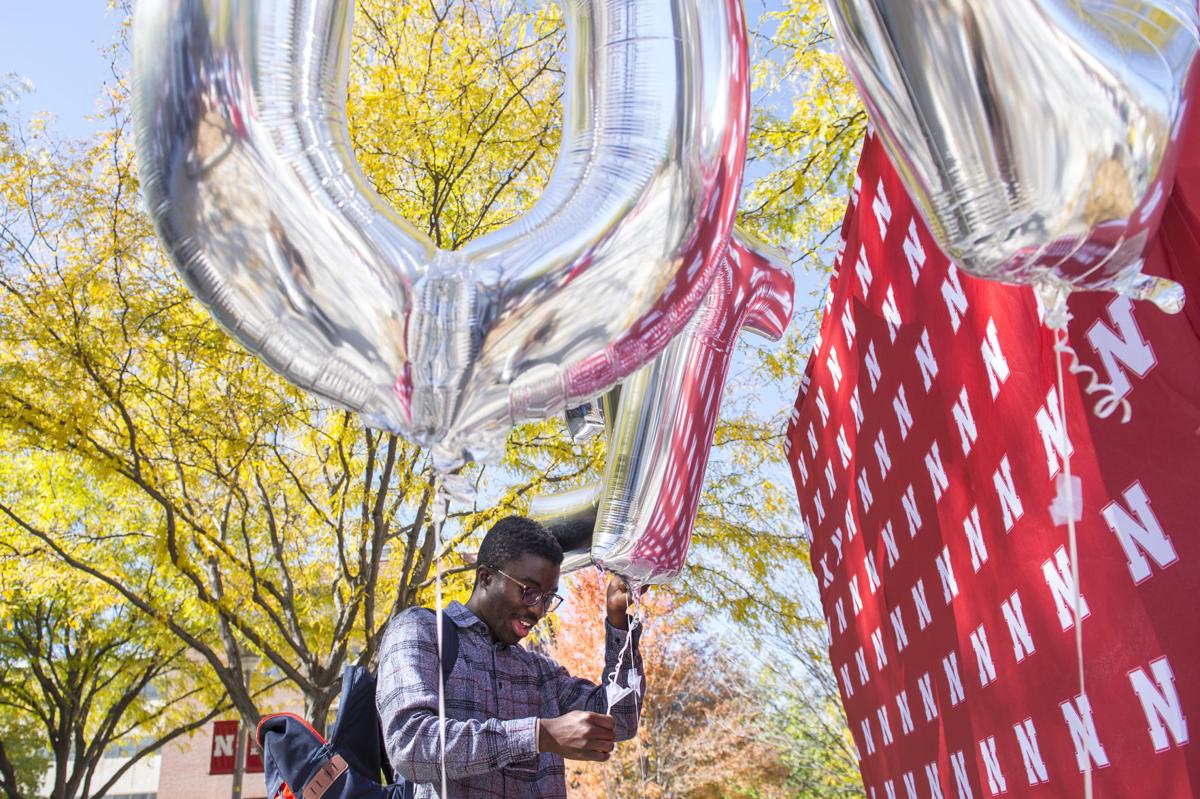 UNL student Jeffrey Owusu untangles balloons that spell "VOTE" during an event to get students registered to vote Thursday outside the Nebraska Union.

Election Precinct 3D slices an irregular polygon around and through the University of Nebraska-Lincoln, roping dormitories, suite-style apartments and Greek houses into a single polling place at the Nebraska Union.

Most UNL students eligible to vote living in Precinct 3D are not registered there, choosing instead to use their home addresses for their voter registration and allow them to cast their ballot elsewhere.

Four years ago, in the 2014 midterm election, only 63 people were registered to vote in Precinct 3D, said Dave Shively, Lancaster County’s election commissioner, and voter turnout fell short of reaching 20 percent in the precinct.

That number rose dramatically in the 2016 presidential election, with 796 UNL students using their campus address to register to vote. Turnout two years ago reached 45 percent.

In this year’s midterm contest, held amid an increasingly polarized political atmosphere, registration in Precinct 3D is exceeding the 2014 election more than tenfold.

As of Tuesday morning, 670 voters -- including 291 Democrats, 227 Republicans, 134 nonpartisans and 18 Libertarians -- were registered to vote in the precinct, according to the Lancaster County Election Commission.

Amanda Melcher, a 20-year-old secondary education major from Wahoo, said she switched her registration to her campus address a few weeks ago in order to vote on issues that affect where she lives and works most of the year.

Last Thursday, Melcher volunteered with the Association of Students of the University of Nebraska to register more students to vote in this year’s midterm elections, saying she believes students are becoming increasingly interested in sharing their voice in politics.

Hunter Traynor, the president of ASUN, said UNL students are tapped into the same political environment as their peers on campuses across the country.

“Across the board, you’re seeing more energy in the midterm elections and a real fervor around voter engagement,” said Traynor,  who is registered to vote in his Omaha-area precinct. “It’s not just UNL, I think it’s a national trend.”

Along with the growing interest in the political process is more concerted efforts at UNL to get students to participate in the democratic process, said Linda Major, assistant vice chancellor for student affairs.

Outside groups like the League of Women Voters of Lincoln and Lancaster County had previously hosted voter registration drives at UNL, Nebraska Wesleyan University and Southeast Community College, according to the chapter’s president, Mary Boschult.

Those events still happen at Nebraska Wesleyan and SCC with successful returns, Boschult said, but students at UNL have been trained to do more of their own voter registration since the 2008 cycle.

The “Occupy the Voting Booth” campaign led by students in the 2012 election cycle led UNL to partner with TurboVote, an online voter registration platform, for the 2014 and 2016 elections, Major said.

“Regardless of where you want to vote, if you want an absentee ballot or want to re-register here, the system will send you the appropriate paperwork,” Major explained.

While there is no direct evidence that UNL’s partnership with TurboVote improved voter turnout, the Institute for Democracy in Higher Education at Tufts University has determined voter participation is on the rise among college students in Nebraska.

The National Study of Learning, Voting, and Engagement found 60 percent of an estimated 20,795 eligible voters at UNL cast a ballot in the 2016 election.

That’s well above the 50.4 percent turnout rate reported for all universities, according to the report published last year, which calculates voter turnout by comparing enrollment figures to student data and publicly available voter participation records.

One presidential election cycle earlier, in 2012, 53 percent of UNL students registered to vote cast a ballot, which was also higher than the 46.9 percent of all college students, NSLVE found.

Fifty miles to the northeast, the majority commuter student population at the University of Nebraska at Omaha also votes at a rate well above the national average. Over 63 percent of UNO’s eligible voters cast a ballot in 2016, and more than 57 percent voted in 2012.

After the 2016 election cycle, leaders from Big Ten Conference schools -- including Nebraska -- huddled at the University of Michigan to form the Big Ten Voting Challenge, a conference-wide competition to drive up voter turnout.

Traynor said ASUN has taken up the challenge as a clarion call, engaging the College Republicans, Young Democrats, Turning Point USA, Young Americans for Liberty and Huskers for Social Democracy to form the Huskers Vote Coalition, which has worked to increase voter registration and participation for this year’s midterm elections.

He said civic engagement stretches beyond political affiliation, and the Big Ten Voting Challenge can set Huskers of all party affiliations behind one common goal: “It’s always nice to beat Iowa.”

Earlier this year, Traynor said ASUN produced a short video to show 4,900 incoming students taking part in new student enrollment at UNL the importance of registering to vote and providing them a link to do so online.

“Shortly after (new student enrollment), there were more than 2,800 students who registered to vote through that link,” Traynor said. “It was fresh in their minds.”

Last week, with $5,000 in funding from the Big Ten Voting Challenge, the coalition and the Nebraska Civic Engagement Table helped register 250 students and passed out more than 2,000 business cards directing students on how to get registered.

Ferhan Barento, a 22-year-old computer science major from South Sioux City, said it was his first time registering because he had previously been disillusioned by politics.

“With the Electoral College, I didn’t think my vote mattered in the last election,” Barento said, adding he was inspired this year to cast a vote against the policies of President Donald Trump.

Registering for the first time, Halla Ahovissi, 18, said she registered where her family lives in Omaha, and explained that she shares their mostly Democratic political beliefs.

Requesting an absentee ballot from his Houston voting precinct, Fermin Moreno said he was never much into politics.

“But all of my friends are,” said Moreno, a 19-year-old mechanical engineering major. “They are always talking about politics, so I thought I should register.”

Moreno, like Barento and Ahovissi, said now that they are registered to vote for the first time, they plan to set aside the books and study up on the candidates and issues.

Shane O’Grady, 21, also a mechanical engineering major, said he voted in the last election but wanted to make sure his voter registration was up-to-date.

Friday is the last day Nebraskans can visit their local county clerk or election commissioner to register to vote in the Nov. 6 general election.

Former Nebraska Sens. Chuck Hagel and Bob Kerrey looked ahead with optimism Monday while decrying the current state of American politics and t…

A couple of weeks to go before we know whether there's a blue wave, a red uprising or calm seas.

Sen. Anna Wishart of Lincoln wants to lower the voting age in Nebraska to 16.

Sen. Kate Bolz of Lincoln said Wednesday that one of her top priorities for the 2019 legislative session will be "making up for lost ground" i…

The University of Nebraska-Lincoln Honors Program and its students are moving to a new home in the fall of 2019.

According to the National Study of Learning, Voting and Engagement, more than 87% of UNL students registered to vote in the 2018 midterm elections.

Jackson Belva interacts with students at the University of Nebraska-Lincoln to get them registered to vote last week.

Simba gets his photo taken by UNL student Oria Simoini during an event to get students registered to vote Thursday outside the Nebraska Union. This November's election will be Simoini's first election since becoming a naturalized citizen.

UNL student Jeffrey Owusu untangles balloons that spell "VOTE" during an event to get students registered to vote Thursday outside the Nebraska Union.