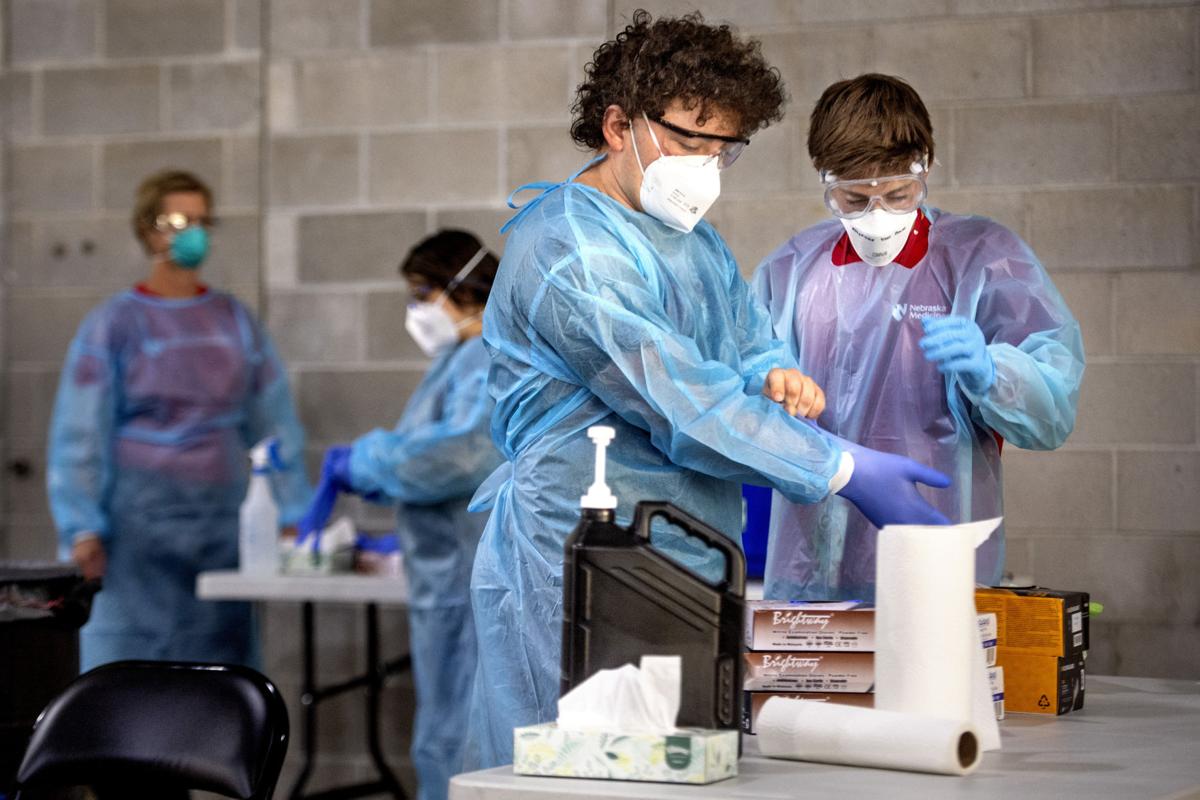 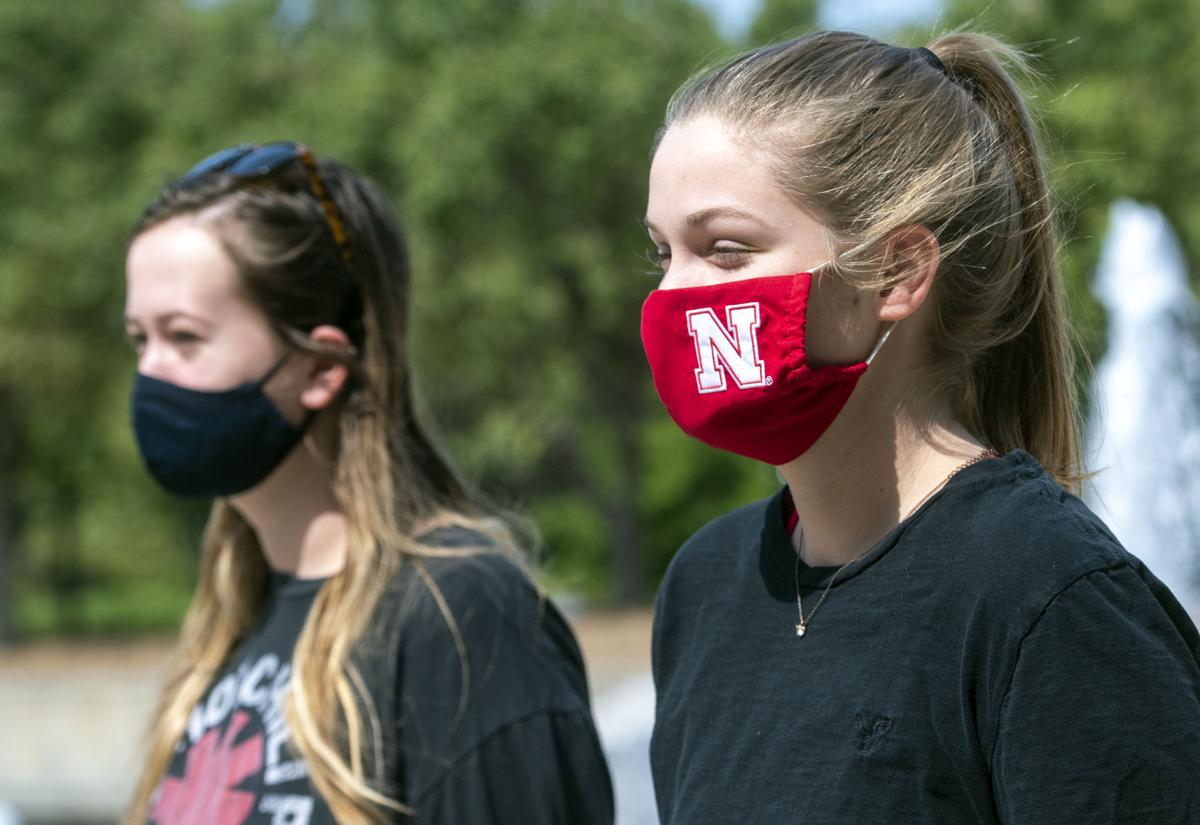 University of Nebraska-Lincoln freshmen Carly Liggett (left) and Sidney Froistad wear masks as they walk outside Nebraska Union on Friday. 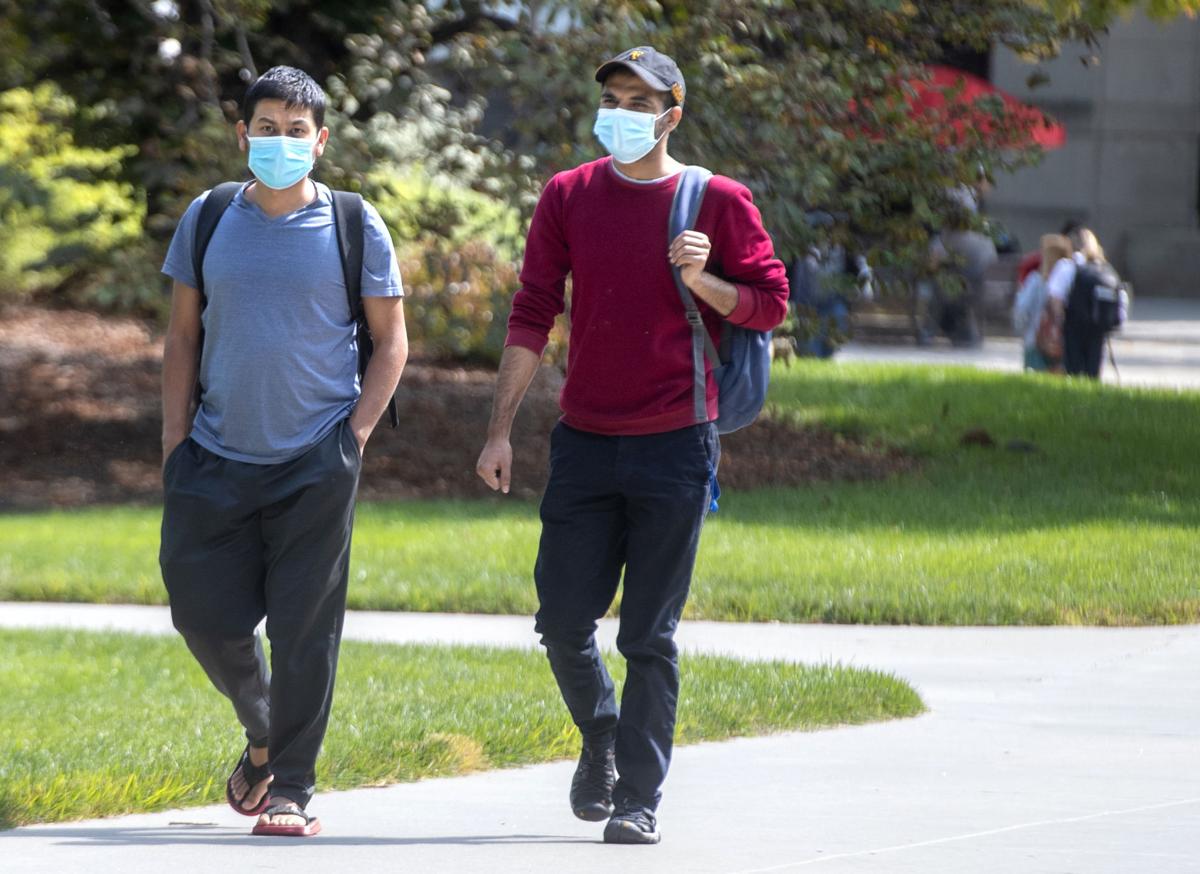 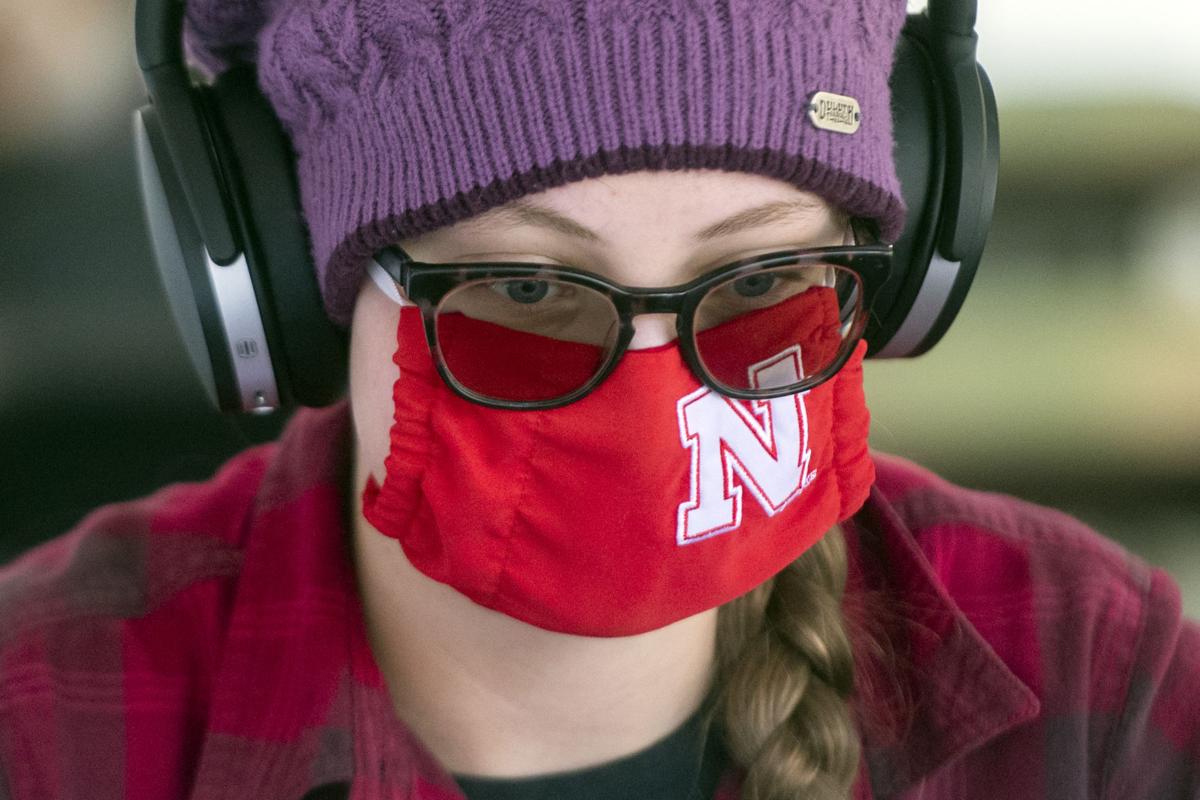 University of Nebraska-Lincoln sophomore Rose Kaup wears a mask as she uses a computer outside the Nebraska Union in September.

One-third of the way through the fall semester, Chancellor Ronnie Green said the plans enacted by the University of Nebraska-Lincoln to bring back students and faculty to campus are working.

Students are wearing masks, and with few exceptions, following social distancing guidelines, Green said, while faculty have found a rhythm to teaching some classes in-person and others remotely or through a combination of the two.

And, the chancellor said, UNL has met the demand for COVID-19 testing on campus through the Test Nebraska site it opened in a parking garage at 17th and R streets.

To date, UNL has reported results of nearly 4,300 Polymerase chain reaction tests, what’s generally thought of as the “gold standard. That’s roughly 115 nasal pharyngeal swabs gathered per day since Aug. 12, well below the 200-a-day capacity at the site — with about 16% of cases coming back positive.

“I’m comfortable with the testing we’ve done,” Green said in a lengthy interview Friday. “We haven’t had the case where we’ve had a lack of space available. We’ve met the demand of test requests.”

The state’s flagship university has followed through on the plans it formed in conjunction with the University of Nebraska Medical Center and the Lincoln-Lancaster County Health Department, he added.

In line with the initial guidance from the Centers for Disease Control and Prevention, UNL has largely focused on testing those with symptoms, those with close contacts to the infected, and populations more at-risk from COVID-19-related complications.

UNL combined that with an emphasis on wearing masks or face coverings, maintaining at least 6 feet of separation, frequent hand washing and disinfecting, and threatened punishment for students who violated those rules.

“That was the optimal approach that we used,” Green said. “We didn’t require everyone before they came back to campus to be tested, we didn’t move to testing a percentage of the population every day, because we just didn’t think it was going to be needed based on what we knew.”

After the semester started, individuals aged 18-22 — the age of traditional college students — accounted for roughly half of the daily positive caseload in Lancaster County.

Green said he doesn't believe those numbers are all attributable to UNL, and noted the numbers have leveled off since then, as have the number of tests done per day.

Despite that, UNL will roll out expanded hours at its Test Nebraska site and broaden its testing criteria beginning next week as it seeks to do an additional 1,500 tests per week.

The new testing strategy, which was announced the same day as Friday’s announcement from the CDC that it had changed its recommendations to include asymptomatic testing, will focus on students who have quarantined but may not be showing symptoms.

Beyond that, UNL plans to randomly select students from on- and off-campus living arrangements, as well as faculty and staff, for voluntary testing in order to gauge the prevalence of the coronavirus among its population.

Before expanding its capacity — Green said it remains to be seen how many more tests are ultimately done — UNL’s daily testing had paled in comparison to some of its peers.

Ohio State University required students to test negative before they could move back to campus last month and continues to test students who live in on-campus residence halls once a week while also randomly selecting students living off-campus to also take a test, reporting more than 63,000 tests to date.

In addition to its pre-test requirement, which netted 38,000 results before the semester began, Indiana University continues to collect thousands of mitigation tests each week using a saliva-based method, with students who refuse facing potential disciplinary action.

Similar to UNL, Penn State offers chain reaction tests to students with COVID-19 symptoms, or those who have come in close contact with an infected person. It also does pool testing — where five samples are run at a time — of 1% of the campus population with a less-invasive nasal swab each day.

Green said he follows the dashboards maintained by 25 peer institutions, including the 13 other schools in the Big Ten, watching the day-to-day fluctuations of testing numbers and positive cases.

No matter the approach, he said nearly all universities have ended up in roughly the same spot, which has bolstered his confidence in UNL’s approach.

“It didn’t matter if you came in and tested everyone doing clearance testing, or whether you were doing twice-a-week saliva testing, or whatever methodology they chose,” Green said. “Almost every institution has had a similar experience in terms of what they’ve seen relative to cases on their campus.

Chancellor Ronnie Green said the differences in who can get what coronavirus test is appropriate given the risk carried by students in each group, adding that the two should not be held up as comparisons.

The protesters waved large U.S. flags alongside other posters that said, "Honk for freedom," "Take the mask off," "Keep your mask off my kid" and "Trump 2020."

The county's total number of cases is now 5,698. The number of deaths remains at 23.

The health system had 31 hospitalized COVID-19 patients Tuesday, its highest number since June 1.

Test Nebraska was the only option available to allow the state to quickly ramp up its capacity to thousands of tests per day, a state official said.

UNL students have housing choices to make: Do they stay on campus during the eight-week winter break, pay a $150 monthly storage fee to keep their belongings in their dorm room, or pack up their things entirely?

According to a survey sent to more than 3,000 first-year and transfer students at UNL in September, 19% of respondents said they had not yet found a friend or a group of friends on campus.

With the semester break coming as coronavirus-related cases, hospitalizations and deaths are soaring, public health officials say they are keeping close watch to see whether or not the virus catches a ride home with college students.

University of Nebraska-Lincoln freshmen Carly Liggett (left) and Sidney Froistad wear masks as they walk outside Nebraska Union on Friday.

University of Nebraska-Lincoln sophomore Rose Kaup wears a mask as she uses a computer outside the Nebraska Union in September. 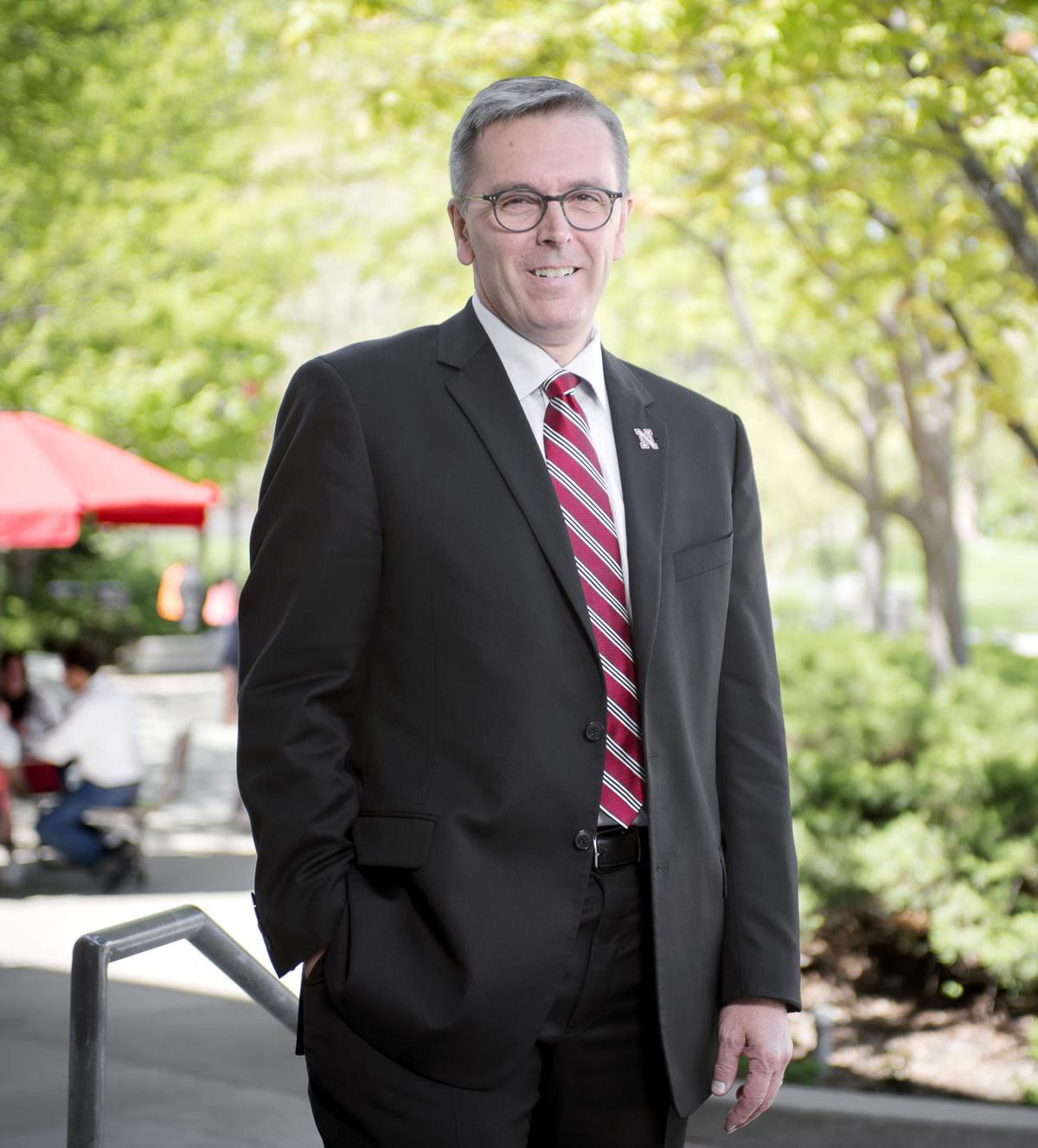 Chancellor Ronnie Green outside the University of Nebraska-Lincoln Student Union.