A quarter century before Dred Scott’s petition to be free from slavery was rejected by the U.S. Supreme Court, a decision that further pushed the country toward civil war, a slave named Charlotte Dupuy asked a Washington, D.C. court to free her family from bondage.

Her owner was Henry Clay, the sitting secretary of state, a former speaker of the House of Representatives and aspiring presidential hopeful.

Known widely as the “Great Compromiser,” Clay was just the latest in a series of high-profile, slaveholding Americans living in the nation’s capital sued by their slaves for their freedom.

In 1818, Priscilla Queen filed a petition against Rev. Francis Neale, a Jesuit priest and future president of Georgetown College. Matilda Derrick sued slaveholder George Mason, a grandson of the revolutionary, in 1822, and in 1828, Thomas Butler petitioned a court against Gabriel Duvall, an associate justice on the Supreme Court.

There are hundreds of instances of slaves suing slaveholders in the Washington court system alone, according to William G. Thomas III, a professor of history at the University of Nebraska-Lincoln who researches and writes about freedom suits.

“Slavery was challenged in court by enslaved people almost from Day 1 of the United States in 1789,” Thomas said. “The legitimacy of slavery is really framed by white slaveholders around the law that it’s legally legitimate. These show us enslaved people said ‘No, it’s not.’”

UNL’s Center for Digital Research in the Humanities have compiled and digitized court documents from more than 500 freedom suits and published them in an online database titled “O Say Can You See: Early Washington, D.C., Law and Family,” through a grant by the National Endowment for the Humanities.

The project focuses on slavery in the 1820s and 1830s, said project manager Kaci Nash, when African-Americans were held as property by a wide strata of Washington society.

“A lot of the general view of slavery is plantations and the agricultural view of enslavement, but this is slavery in an urban environment,” Nash said. “We’ve found suits from slaves of clerical workers, a pastor of a Presbyterian church — slaveholders that you might not normally think of.”

Thousands of court records gathered from a wealth of sources also complicate the histories of some already well-known Americans.

Francis Scott Key, who penned the “Star-Spangled Banner” during the War of 1812, is “a major figure” in the UNL project for his work representing more than 100 enslaved people in court in the 1820s, including Queen in her lawsuit against Neale.

Initially opposed to human bondage, court documents begin to show Key’s transformation into a defender of slavery, Thomas said: “He eventually takes a very racist position in which he believes enslaved people who become free should not have their freedom.”

Dupuy, who eventually lost her case against Clay, was jailed for refusing to return to Kentucky, a measure Clay approved of according to letters published as part of the project.

Later, Clay granted Dupuy and her children a deed of manumission, an action historians have generally ascribed to his generosity and vision that the institution of slavery would eventually end, but the overarching record shows something else entirely, Thomas said.

“His giving Dupuy her emancipation was grudging, it was utterly the last thing he really wanted to do,” he said. Like so many other slaves, Dupuy did not win in court, but her efforts against Clay added to the mounting pressure being felt against slaveholders."

Transcribed court documents also illustrate the awareness slaves had about the legal proceedings of other slaves, said Laura Weakly, a metadata encoding specialist who also worked on the project.

“It’s really compelling when you think about enslaved people and what they had to go through, that they were aware of what was going on around them and how to use the laws, how to use certain arguments to make their own cases,” Weakly added.

UNL’s project has aimed to show how pervasive the institution of slavery was during the early republic, even among free whites who never owned a slave, but served as attorneys, judges, witnesses or jurors during the lawsuits.

Each individual name present in the digitized documents has been assigned a unique identifier, allowing digital designers and programmers like Karin Dalziel, Jessica Dussault, Jeremiah Bauer and a company of research assistants to chart relationships and create a searchable catalogue, broadening the understanding of just how far-reaching the freedom suits stretched.

Some figures in the documents were already given a signifier by the Library of Congress — well-known historical figures like Clay, Mason and Duvall, for example — but the UNL team hopes that by tagging slaves, free blacks and others associated with freedom lawsuits with an ID will make them more visible for researchers in the future.

Cross-referencing names from the court records with names made available in city directories and other sources allowed UNL’s Center for Digital Research in the Humanities team to build a first-of-its-kind interactive map of Washington, placing each of those names at an address.

The map went live on the “O Say Can You See” website in March.

Patrick Hoehne, a geographic information system specialist, said the map provides users a “living environment of the city,” showing slaves living in all quarters of Washington, giving users some insight into how relationships and geography may have played a role in the legal challenges issued by slaves.

“Slavery isn’t an isolated thing, it’s in every part of the city — the Navy Yard and across from the White House — and you have these reverberations of this legal actions taken by enslaved people,” he said. “It’s not an unknown factor.”

While slavery is generally thought of in abstract terms, or as an institution that just happened to a mass of people for a time in U.S. history, Thomas said, the “O Say Can You See” project is helping redefine the history as one of individuals and families.

“I think Americans need to begin thinking about slavery in family terms, as the enslavement of particular families,” he said. “That’s what this project really aims to do, to highlight the particularity of the family experience and to put new families into American history.”

A few years ago, Amari Jackson, a journalist, writer and researcher from Atlanta, began tracing the history of the 100-acre farm that has been in his family since 1906, as well as his family lineage.

But he hit a roadblock several generations back on his father’s side, unable to locate much information about the Shorter family until he found a listing of the more than 30 freedom lawsuits the enslaved Shorter family filed as documented in the UNL project.

“I didn’t expect it,” Jackson said in a phone interview. “I didn’t know about the freedom suits, and didn’t realize they were as prolific as they were in the 1790s and later.”

It helped Jackson and his relatives piece together a whole new part of their own histories: “It’s like assembling a broken mirror. You’re piecing together yourself and your own history.”

And from a bigger standpoint, it helps fill in the story of race in America, he added. It’s not always a kind story, very nuanced and far from linear.

“My family definitely speaks to that, both to the tragedy and richness of African-Americans, the challenges and obstacles and even the triumphs we endured,” he said.

The average recovery from a flood the size and scale of the historic event affecting areas of Nebraska extends a little more than nine years, …

Nebraska is one step closer to repealing a state constitutional amendment that allows people to be enslaved as punishment for a crime.

The newspaper story called her an “old colored lady.”

Mickle Middle School eighth-graders spent two weeks working on a project about the middle passage, designing memorials to honor those who endu…

Nebraska City's former clerk has reached a $325,000 settlement with the city over a lawsuit alleging the City Council had damaged his reputati…

The grand narrative of history taught in Lincoln Public Schools classrooms — the one marked by famous letters and iconic speeches, by influent…

Bible underscores Lincoln's belief he was to end slavery

SPRINGFIELD, Ill. (AP) — A Bible given to Abraham Lincoln in the final months of the Civil War ties together the 16th president's budding views on spirituality and his belief that God was calling him to end slavery as well as his widow's labors to solidify his religious standing, historians say.

Most Nebraskans voted to abolish slavery as criminal punishment. But 32% voted to keep it

Who would vote against ending slavery as a way to punish crimes? About 274,000 Nebraskans just did, including majorities in 26 rural counties. 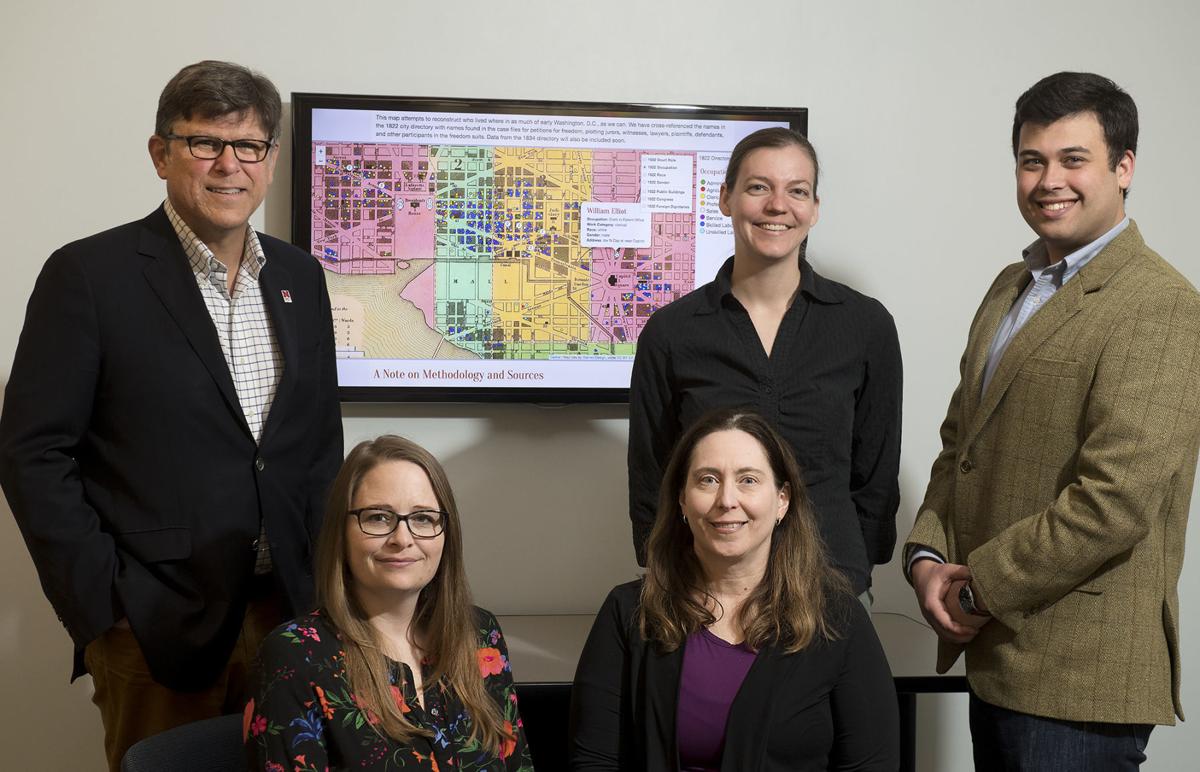 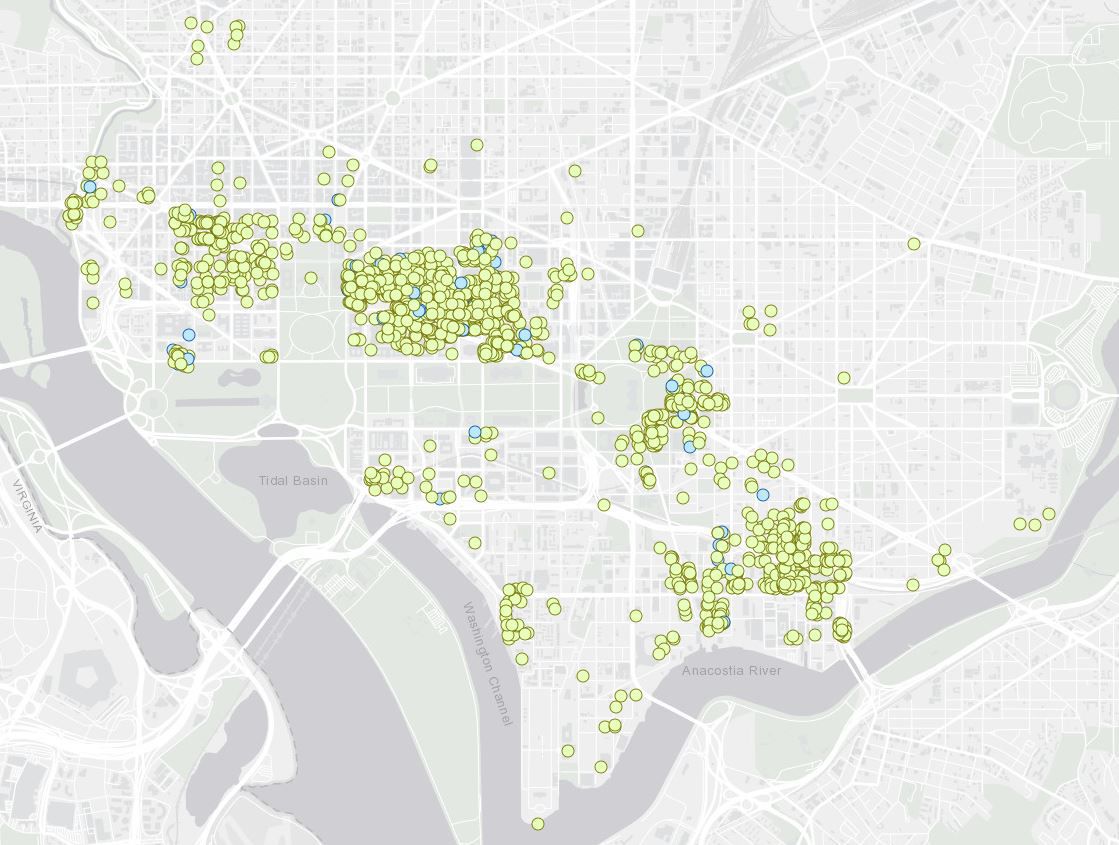 This map shows the population of white people (green dots) and black people (blue dots) in Washington D.C. in 1822. UNL’s Center for Digital Research in the Humanities have compiled and digitized court documents from more than 500 freedom suits and published them in an online database titled “O Say Can You See: Early Washington, D.C., Law and Family,” through a grant by the National Endowment for the Humanities.