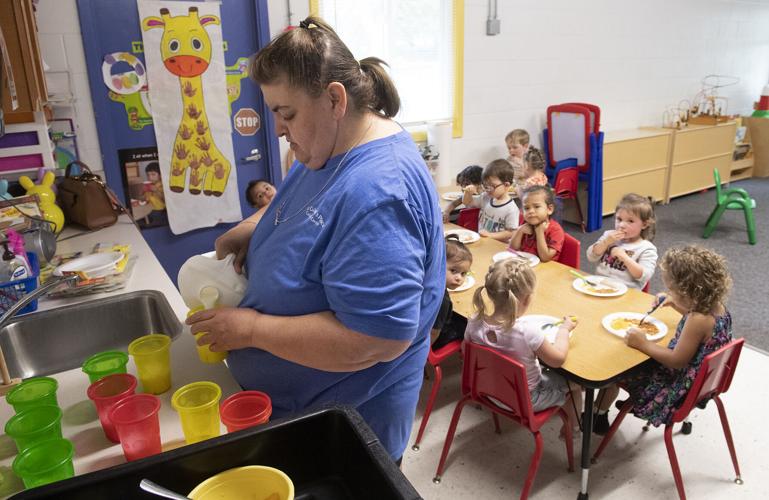 Teacher Maria Ramos pours milk as children aged 18 months to 3 years eat lunch at The Children's Place child care center Tuesday. According to a report from the Buffett Early Childhood Institute, 87% of providers received some kind of COVID-19 relief funding in the last year. 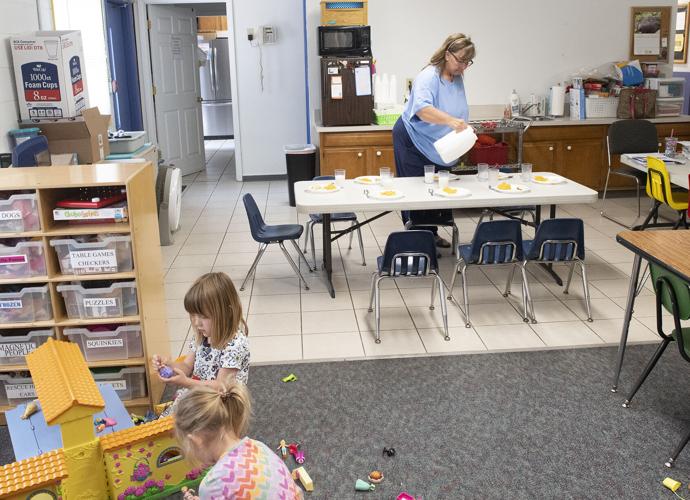 Teacher Kathy Frizzell prepares lunch as children play at The Children's Place child care center Tuesday. According to a report from the Buffett Early Childhood Institute, 87% of providers received some kind of COVID-19 relief funding in the last year.

In the early months of the coronavirus pandemic, Chris Bruner's child care center was one of the first in Lincoln to close its doors because of a COVID-19 outbreak. The real impact of the virus, however, was just taking shape.

Soon, part-time staff at The Children's Place quit. Applicants were few. The center, facing a staffing shortage, had to take in fewer children, all the while contending with the invisible threat of COVID-19.

"We're licensed for 60 kids. We were at a point where we were barely meeting 30 enrolled because I couldn't take any more children because I didn't have staff," said Bruner, the center's director for more than 40 years.

It's a scenario that has been replicated across Nebraska in the past year, with many child care centers reporting difficulties hiring and retaining staff, paying sufficient wages and preventing the spread of COVID-19, according to a survey released Wednesday from the Buffett Early Childhood Institute at the University of Nebraska.

Conducted in February, it paints a sobering picture of a field still feeling the aftershocks of a worldwide public health crisis. The survey is the institute's third report on the state of early child care and education during the pandemic.

Out of the more than 750 providers surveyed — spread equally between urban and rural Nebraska — two-thirds said they are experiencing staff turnover, with 69% reporting staff leaving the early childhood field entirely.

Of providers who employ staff, nine in 10 said they had difficulty filling open positions because of a lack of applicants or inability to offer sufficient pay or benefits, the 35-page report said.

The pandemic hit Nebraska children particularly hard. Here are ways to look after their mental health

At The Children's Place, Bruner said she lost one staff member because she didn't offer insurance benefits and had to increase wages to retain another worker planning on leaving the field. Finding qualified applicants is even harder.

"What's sad is we've had to lower our standards of people we've had to hire," she said. "That's where everyone has gone to, it seems like, and those are the people that aren't sticking around."

As far as researchers know, the survey is also the first in Nebraska to gauge the actual health impacts of the coronavirus on child care providers, said Alexandra Daro, a research specialist at the Buffett Institute and one of the report's co-authors.

Daro and her colleagues found that more than half of providers — those actually in charge of operating a home- or center-based child care business — contracted COVID-19 at least once, a rate two times higher than the rest of the state, despite three-quarters of respondents saying they are vaccinated.

"I would say the impact of COVID directly was very surprising," Daro said. "Seeing that providers experiencing (COVID) at twice the rate, that was even more shocking."

The survey, conducted electronically, takes into account the unprecedented surge in cases from December to February driven by the highly virulent omicron variant.

But the health impacts go beyond just physical illness.

Most of the surveyed providers reported "experiencing symptoms of stress, including changes in sleep and eating," while many said they've felt anxiety, depression, sadness and had difficulty concentrating. That's troubling, Daro said, because it has a direct effect on children.

Child care centers did receive much-needed injections of federal and state coronavirus relief that has come in waves over the past 2 1/2 years.

In the early days of the pandemic, Bruner said she used that money for cleaning supplies, masks and other things her center needed right away. Later, she used the funding for retention bonuses and even rent and utilities.

According to the Buffett report, 87% of providers received some kind of COVID-19 relief funding in the last year. But like Bruner, four in five providers said they used it to simply stay afloat by paying rent and utilities, with a majority saying they saw a drop in income in the past year. One in four also said they've experienced food insecurity over the past 12 months.

Daro said providers have seen some relief in the form of a state subsidy program put in place during the pandemic that allows providers to bill up to five absent days per child a month and receive reimbursement from the state.

At The Children's Place, things are steady. The center is nearing capacity again and part-time staff has been added. Many of the 13 employees have been there for decades and only one retired this year.

But Bruner knows not everyone has been quite so lucky.

"We're kind of one of the fortunate ones," she said. "We made it through."

'The bigger pandemic' — Nebraska is in a mental health crisis, but many are struggling to find care

Mayhew elected Lincoln Board of Education president for a fifth time

Don Mayhew has represented District 7 on the school board since 2001 and was board president when Superintendent Steve Joel was hired.

Hundreds of people rallied on the north side of the Capitol for the second time since a draft Supreme Court opinion striking down Roe v. Wade was leaked.

Watch now: A book, a garden and the ELL students at Lincoln Northeast who found a space to belong

After reading "Seedfolks," a book about a group of immigrants who bond over a community garden, English language learner students at Lincoln Northeast were inspired to discover their own green thumbs.

Chase Larsen, 31, and Dakota Wagner, 27, were booked into jail on suspicion of possession of stolen property and burglar's tools.

Lincoln Fire and Rescue Capt. Nancy Crist said they were called to 4040 N. Ninth St. just before 1 p.m. Tuesday and arrived at the home to find no smoke or fire but a black spot on the ceiling.

The move to re-up mask mandates at two Lincoln schools comes after 10 COVID-19 cases at Eastridge Elementary and 11 at Zeman Elementary.

The pandemic forced medical professionals, including Nebraska-based researchers and physicians, to innovate. Some innovations likely will be around for good.

Just before the COVID pandemic broke out, the University of Nebraska Medical Center's Global Center for Health Security received a grant from the federal CDC to strengthen infection control training, education and tools.

Teacher Maria Ramos pours milk as children aged 18 months to 3 years eat lunch at The Children's Place child care center Tuesday. According to a report from the Buffett Early Childhood Institute, 87% of providers received some kind of COVID-19 relief funding in the last year. 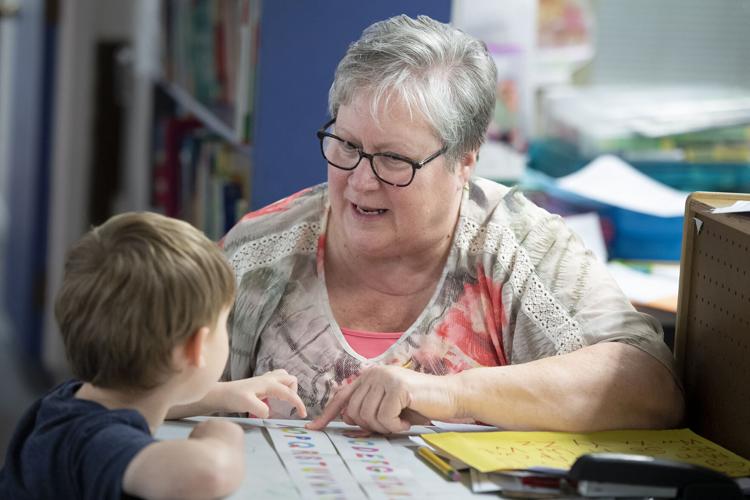 Teacher Cindy Remmenga works with a child on the alphabet at The Children's Place child care center Tuesday. The Buffett Early Childhood Institute reported that of more than 750 providers surveyed — spread equally between urban and rural Nebraska — two-thirds said they are experiencing staff turnover, with 69% reporting staff leaving the early childhood field entirely. 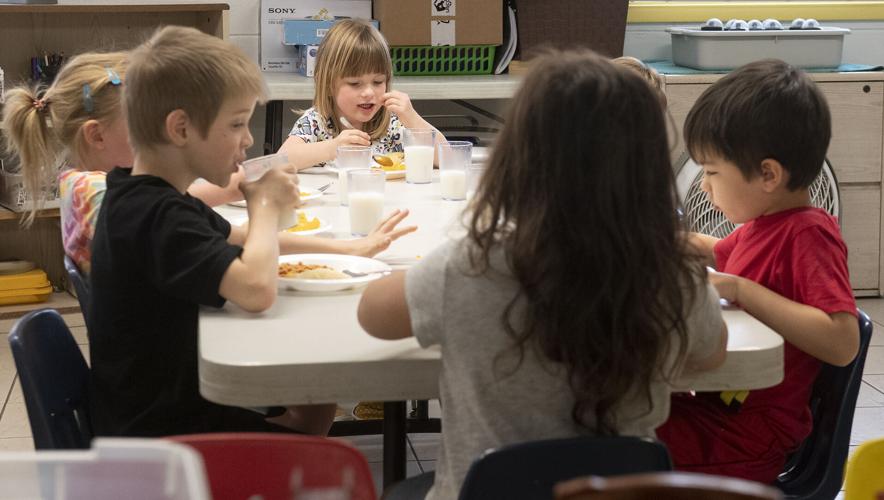 Children in the pre-kindergarten age group eat lunch at The Children's Place child care center Tuesday. According to a report from the Buffett Early Childhood Institute, 87% of providers received some kind of COVID-19 relief funding in the last year.

Teacher Kathy Frizzell prepares lunch as children play at The Children's Place child care center Tuesday. According to a report from the Buffett Early Childhood Institute, 87% of providers received some kind of COVID-19 relief funding in the last year.