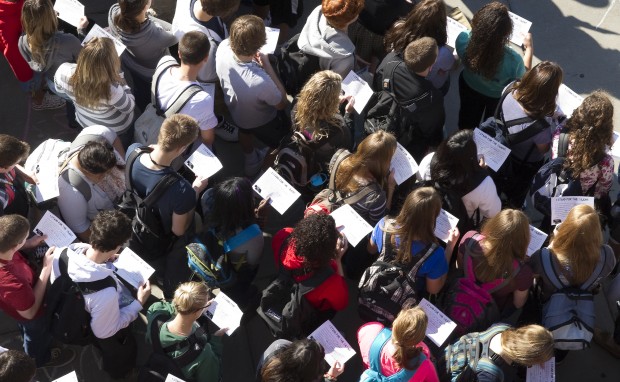 Students participating in Stand for the Silent Day read an anti-bullying pledge before observing seven seconds of silence and releasing balloons on Friday, April 20, 2012, at Lincoln Southwest High School. The pledge begins "From this day forward I promise to respect those around me as well as respect myself." (GWYNETH ROBERTS/Lincoln Journal Star) 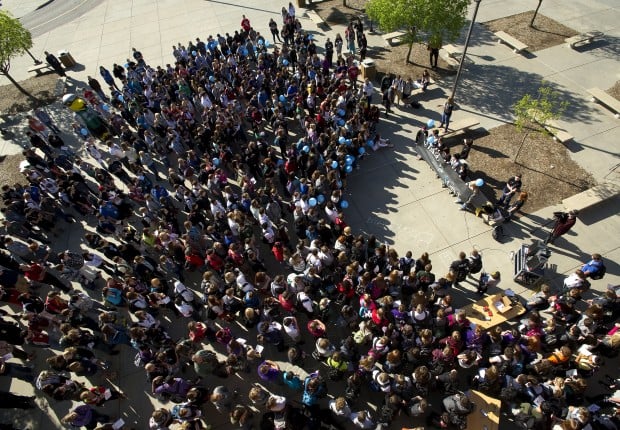 The idea sprang from several sources at Southwest High School -- students and teachers and a civics class -- who all landed on the same notion: It's time to take a stand.

So they did Friday morning. Every student filed out of class, gathered in front of the school and took a pledge to be kind to others, stand up to people who bully and respect those around them. Then, they released balloons.

Sophomores Madison Klute and Markee Tripp weren't aware -- at first -- of the Stand for the Silent movement which started in Oklahoma in reaction to an 11-year-old boy named Ty Smalley who committed suicide after being suspended for retaliating against the bully who had picked on him for two years.

They weren't aware that ServeNebraska had set Friday as Nebraska Stand for the Silent Day or that Southwest teachers had attended a conference featuring Ty's parents. They didn't know a parent who'd heard the Smalleys talk had emailed administrators urging them to take a stand.

But Madison saw a trailer for a new movie about bullies and posted it on her Facebook page. Markee responded and said they should try to do something. So, the two visited Southwest Principal Rob Slauson.

There, they learned that teacher Lisa Bales had been inspired by the Smalley's story and brought it back to her civics class, which took it on as a service project.

Madison and Markee worked with Bales and her class, and junior Sarah Hove agreed to perform the slam poem she'd written some time earlier.

Both Madison and Markee say they hope to help reduce the bullying that happens at school, much of it on Facebook, or between groups of students who gang up on one person.

"I hope it will bring awareness, make it better next year," Markee said.

Similar events took place at more than 20 Lincoln schools as part of Stand for the Silent Day. Some held assemblies or made announcements throughout the week. Some handed out "I am somebody" bracelets, and many students -- like those at Southwest -- signed pledges.

"It's a theme we want to continue to talk about," Bales said.

Sarah, who wrote a slam poem that recounts stories of people who've been bullied and picked on, said she hopes students start to understand how their actions affect others.

"I've had a lot of experience with it myself and with friends, each of the stories is definitely true."

Students participating in Stand for the Silent Day read an anti-bullying pledge before observing seven seconds of silence and releasing balloons on Friday, April 20, 2012, at Lincoln Southwest High School. The pledge begins "From this day forward I promise to respect those around me as well as respect myself." (GWYNETH ROBERTS/Lincoln Journal Star)