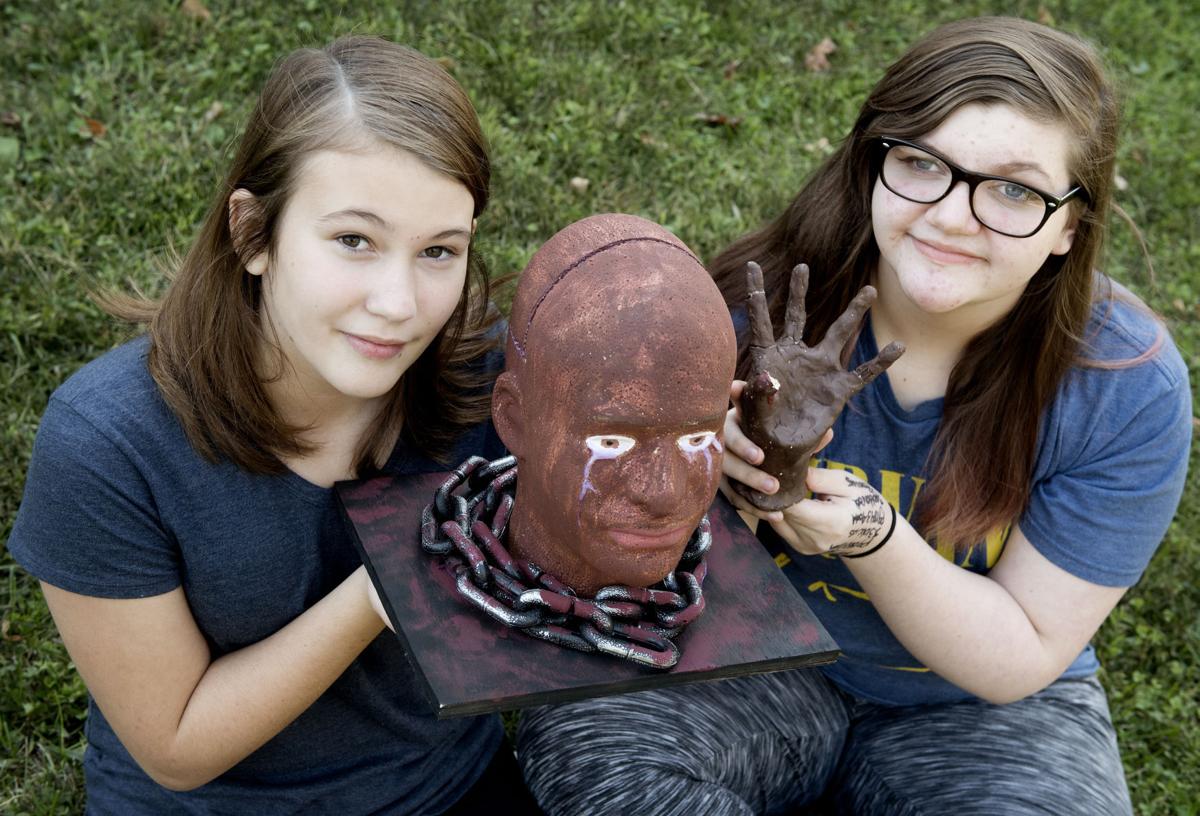 Mickle eighth-graders Amanda Garrett and Genah Laursen hold slavery memorial projects they did as part of their study of the middle passage. Because of a complaint from a parent about the project being inappropriate the memorials were not displayed throughout the school, though LPS officials say it's important to teach such subjects. 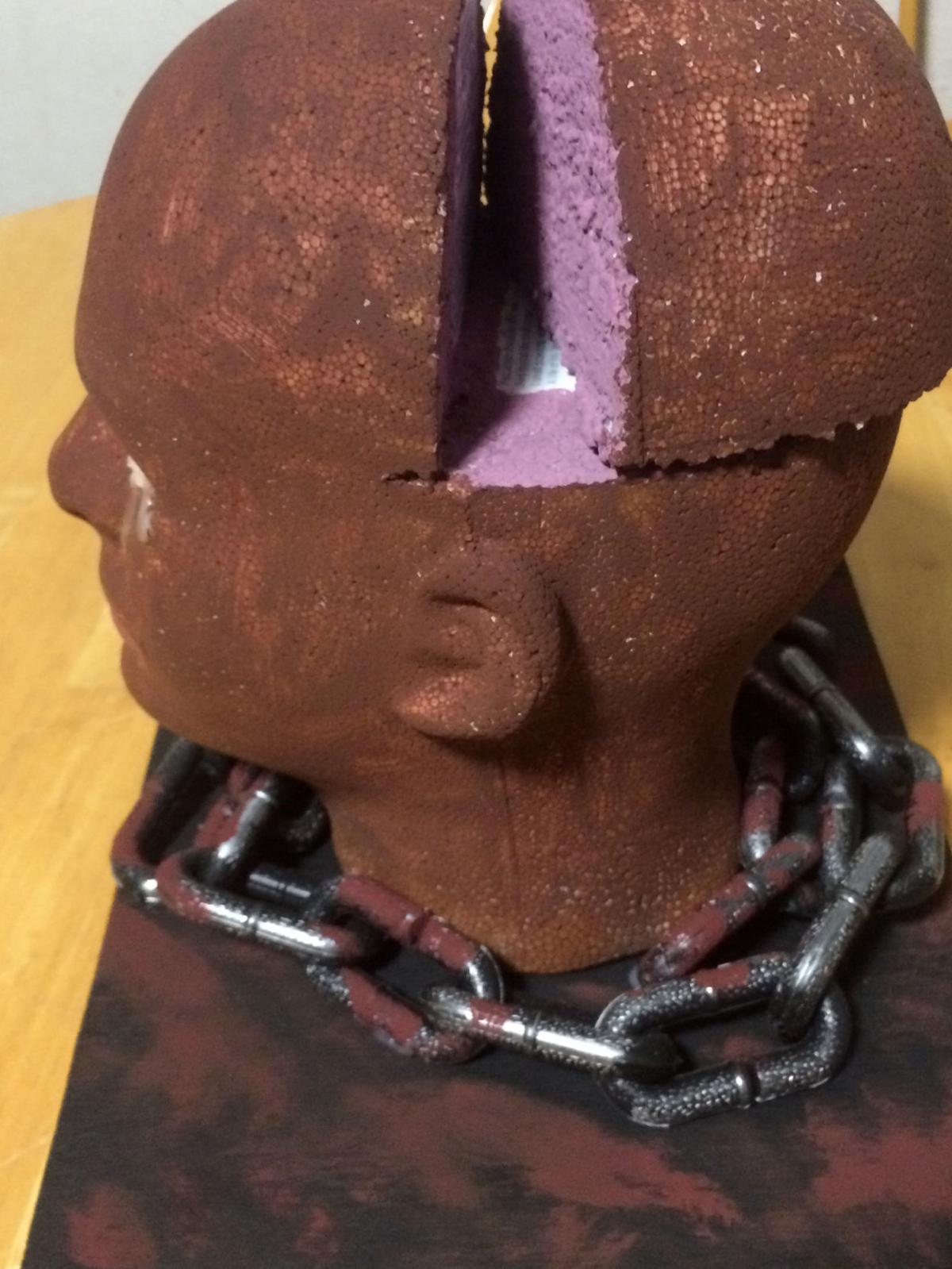 Mickle Middle School eighth-graders Amanda Garrett and Genah Laursen made a slavery memorial as part of their study of the middle passage. Inside the memorial’s head are lyrics from “Amazing Grace.”

Mickle Middle School eighth-graders spent two weeks working on a project about the middle passage, designing memorials to honor those who endured the horrors of slave ships crossing the Atlantic Ocean in the 1600s.

They wrote about what they’d learned and created memorials — models of slave ships and hands bound by chains — and they brought them to Mickle, expecting them to be displayed at the school.

Instead, they took their projects home two days later because, teachers told them, there had been complaints about the project.

Frustrated parents posted on Facebook — and the debate was on. Hundreds commented, weighing in about the project and teaching about slavery. Many couldn’t understand the complaints, or the school’s decision.

Shelli Laursen's daughter, Genah, was among students who made a memorial, creating a clay hand with a thumb broken by the thumb screws used on the ships.

It took her four tries to get the hand mold correct, and she was upset to have to bring it home, said Laursen, who commented on the Facebook post on a group site, though she doesn't know the parent who made the original post.

“I think it’s ridiculous,” Laursen said in a telephone interview. “It’s our history and we don’t want history repeating itself. ... We’re all embarrassed about things in our past. So is America. But let our kids learn about it.”

As it turns out, Lincoln Public Schools officials agree, despite the principal’s decision not to display the memorials around the school.

“The middle passage is as much a part of American history as the signing of the Constitution, the Revolutionary War,” said Thomas Christie, multicultural school/community administrator at LPS. “It’s part of who we are today.”

Teaching middle-school students about the middle passage — a part of a system of trading routes that connected Africa to the Americas and carried slaves in horrible conditions — is required, and it’s included in state standards, said Jaci Kellison, LPS social studies curriculum specialist.

And most schools do some form of the memorial project, she said, though it’s not required.

Mickle received one call from a parent who felt the memorials were inappropriate, and because the principal couldn't reach that parent to discuss the concerns, he decided "out of an abundance of caution" not to display them around the school, said Communications Director Mary Kay Roth.

They were, however, displayed in the classroom for at least two days and — contrary to concerns of some parents — all the projects were graded and the school did not receive complaints that the project was somehow racist, she said.

“When there is a complaint we often pull back and say ‘Are we doing this the right way?’” she said.

In this case, they believe they are, Roth said, although the district didn’t do a good job of communicating with parents about what happened.

It’s difficult subject matter, Christie said, and teachers have to be sensitive to students when broaching such subjects. But one of the important parts of teaching history is to fill in the missing information and correct the misinformation — such as textbooks that used to refer to slaves as "workers" or portray them as happy and content, he said.

Laursen said what she'd heard didn't make sense to her — that parents were upset that the memorials were gruesome or gory — since that's exactly what slavery was, and students need to understand that.

Christie agreed: The trip across the Atlantic was brutal — slaves were chained in rows on the floor or on shelves inside the ship during the trip, which took three to four months. If a ship started with 300 enslaved people, reaching its destination with 60 was considered successful.

“Part of it is people don’t know the horror of it,” he said, and not knowing that leads to biases.

"What happened in the past has a great impact on what happens in the present," he said.

In an effort to both correct misinformation and fill in missing information, LPS teaches history by relying heavily on original documents, Kellison said.

For the middle passage lessons, that means students read actual accounts of slaves, slave owners and ship owners. They look at the meticulous records kept by merchants.

The goal: to have students mine original documents and look at a historical issue from all perspectives, then reach their own conclusions.

LPS has taught students about the middle passage for years, at least as far back as the late 1990s, Kellision said. Although it wasn’t specifically mentioned in state standards then, students had to analyze the impact of European expansion, which included trade in slaves, tobacco, rum, furs and gold.

LPS has been using original documents as a way to help students “think like historians” for several years, though the format was formalized in 2011, Kellison said.

Such an approach pushes students to put records in context, evaluate the source and corroborate evidence to reach a conclusion, Kellison said.

“If you hear any voice out of the past you get a single story,” she said, and hearing just one story can be dangerous. “To get the full story you need to listen to all sides.”

Genah Laursen said she liked the project, because it showed her what really happened, and the memorial made her think about what people went through on the ships.

Her friend, Amanda Garrett, made a head with chains around its neck. She cut out a portion of the back of the head, and added the words to “Amazing Grace.”

In today’s polarized climate — where controversies about confederate monuments or NFL players taking a knee are likely to come up in discussion in civics classes — such history lessons are even more important, Kellison said.

“If you're going to talk about what’s going on today you need to have this context.”

Lauren Moon stood in the Cloud Sky Studio vocal booth, trying to sing phrases of a song an octave higher than the melody.

Irving community embraces its chimney swifts; why everybody should care about them

Here’s what happens when you have a nationally known wildlife conservation photographer living in your neighborhood: You see things differently.

Timeless message against bullying takes the stage at Community Playhouse

In 1944, there was no such thing as National Bullying Prevention Month.

If Ina Bhoopalam has learned anything over the past year, it’s that inspiration can spring from the most unlikely places.

Pulling up the past: Dawes Middle School alums dig up time capsule from 1999

On a chilly fall Friday, not long before the cloudy sky turned dark, the past met the present at Dawes Middle School.

UNL project illustrates history of slaves suing for their freedom

A quarter century before Dred Scott’s petition to be free from slavery was rejected by the U.S. Supreme Court, a decision that further pushed …

Mickle eighth-graders Amanda Garrett and Genah Laursen hold slavery memorial projects they did as part of their study of the middle passage. Because of a complaint from a parent about the project being inappropriate the memorials were not displayed throughout the school, though LPS officials say it's important to teach such subjects.

Mickle Middle School eighth-graders Amanda Garrett and Genah Laursen made a slavery memorial as part of their study of the middle passage. Inside the memorial’s head are lyrics from “Amazing Grace.”