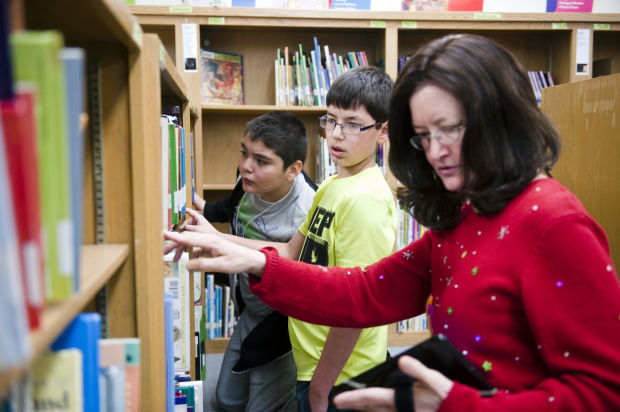 Norwood Park Elementary librarian Mary Kay Kreikemeier helps fifth-grade student Nickelas Mahoney (center) look for a book on eagles while Eric Martinez (left) searches for a book on his research topic on Monday. More than 11,000 people in the Lincoln area have signed “Declarations for the Rights of Libraries” as part of National School Library Month. 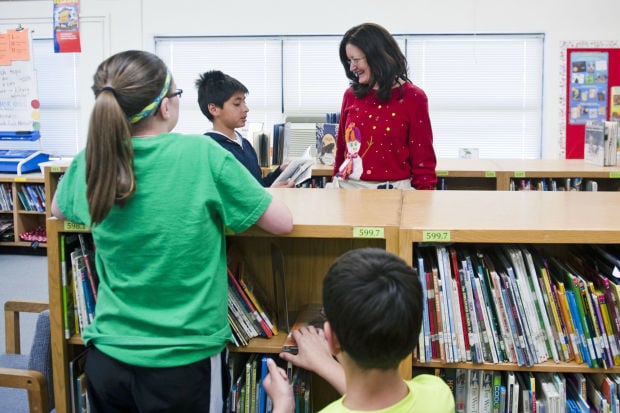 Fifth-graders delved into research projects at the Norwood Park Elementary library Monday afternoon, a task that ended with a topic in mind, a book in hand and an online source noted.

Such is the hybrid world of school libraries today, one that encompasses the endless opportunities of cyberspace and the tactile pleasures of bound volumes.

It’s why fifth-grader Javen Anderson had a book about sharks sitting next to his laptop Monday, why he loves scary books the most but would prefer to read them on e-books (because his little brother can’t rip those pages).

And it’s why Lincoln’s librarians decided to remind their patrons that libraries are still viable, important places that aren’t going anywhere no matter how quickly technology changes the world.

“We all believe libraries will not go away. They are the avenue to access information ... in print or digital form,” said Mary Reiman, Lincoln Public Schools director of library media services. “The device may be different but the love of reading has not gone away.”

To highlight that message, libraries at LPS, parochial schools, the city and the 15-county Southeast Library Systems decided to join a national campaign as part of National School Library Month. For the past two weeks, they’ve asked patrons to sign “Declarations for the Rights of Libraries” to reinforce the role school libraries play in education.

By Monday afternoon, they'd gathered 11,786 signatures, a number that “stunned and thrilled” those at the American Library Association when they called in their totals, Reiman said.

There are many “special” libraries people often forget about, she said, including those at the hospitals, prisons and colleges. In Lincoln, the Nebraska Department of Roads has a library, as does the Lincoln Regional Center and the American Historical Society of Germans from Russia.

LPS has 56 libraries, and collected about 9,000 of the declaration signatures, she said.

And like nearly all school libraries, they offer a combination of digital and traditional books.

LPS students have 863,959 books to choose from, and they check out more than 1 million items each year. The district also offers digital reference collections, which have gotten more than 1 million hits, as well as free and subscription-based e-books.

“For us, people still want print materials, they still want DVDs and CDs,” she said. “But we haven’t gotten close to reaching the saturation point of e-books.”

At LPS, the number of print materials being checked out has been going up, despite the increasing availability of online books and references, Reiman said.

“I think it’s because there are more fun resources out there,” she said. “There are informational books ... that are beautifully done ... it’s not like the old days when there was lots of text on a page with black-and-white photos.”

Nor have people lost the love of turning pages, she said.

And she hopes the signature-gathering process reminds students and their parents that libraries are still the place to go to find stuff out.

“We help individuals find information, we allow opportunities for families to access more information,” she said. “We just believe in that right to know.”

Toddler runs off, gets stuck in 'the claw'

Those trying their hand at the Bear Claw are supposed to plunk money in the arcade game and use a mechanical claw to pluck a toy from below. T…

COLUMBUS — The Columbus Public Library board has passed on a unique gift offer.

Donation box rule requires disclosure on side of box

Cash and scholarship awards were presented April 4 to winners of the National Arts Program (NAP) contest for employees of the City of Lincoln,…

G7 price cap on Russian oil kicks in, Russia will only sell at market price

This historic crown is being readied for King Charles's Coronation Day

This historic crown is being readied for King Charles's Coronation Day

Norwood Park Elementary librarian Mary Kay Kreikemeier helps fifth-grade student Nickelas Mahoney (center) look for a book on eagles while Eric Martinez (left) searches for a book on his research topic on Monday. More than 11,000 people in the Lincoln area have signed “Declarations for the Rights of Libraries” as part of National School Library Month.