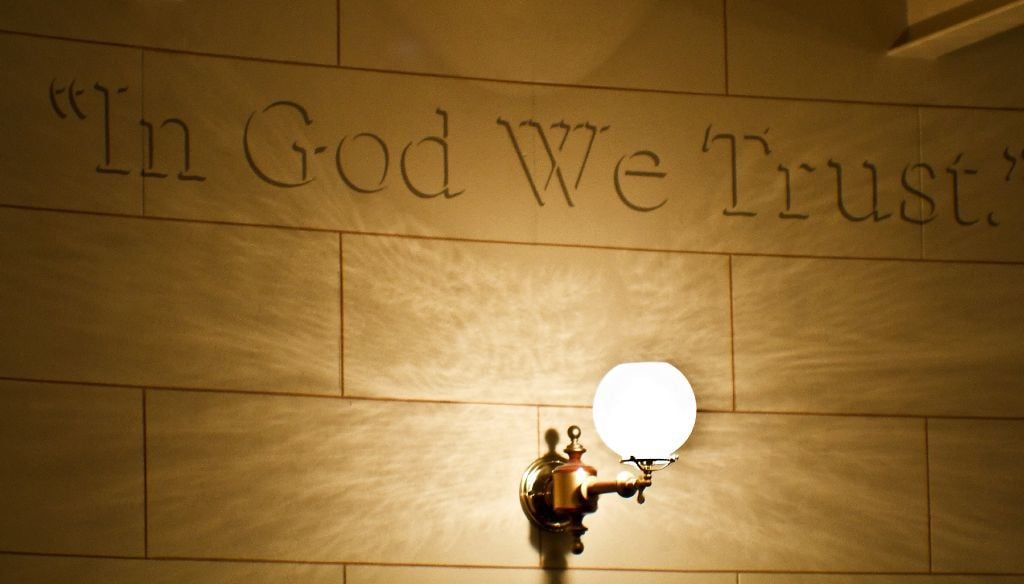 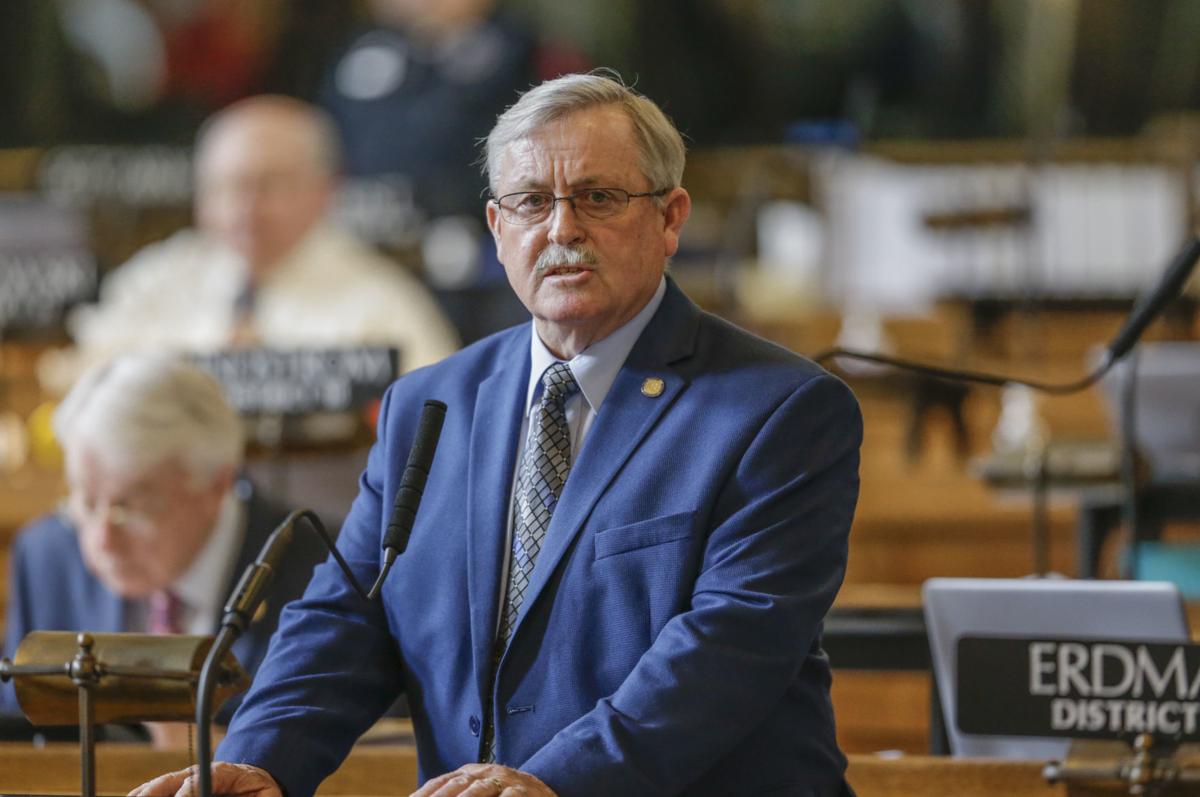 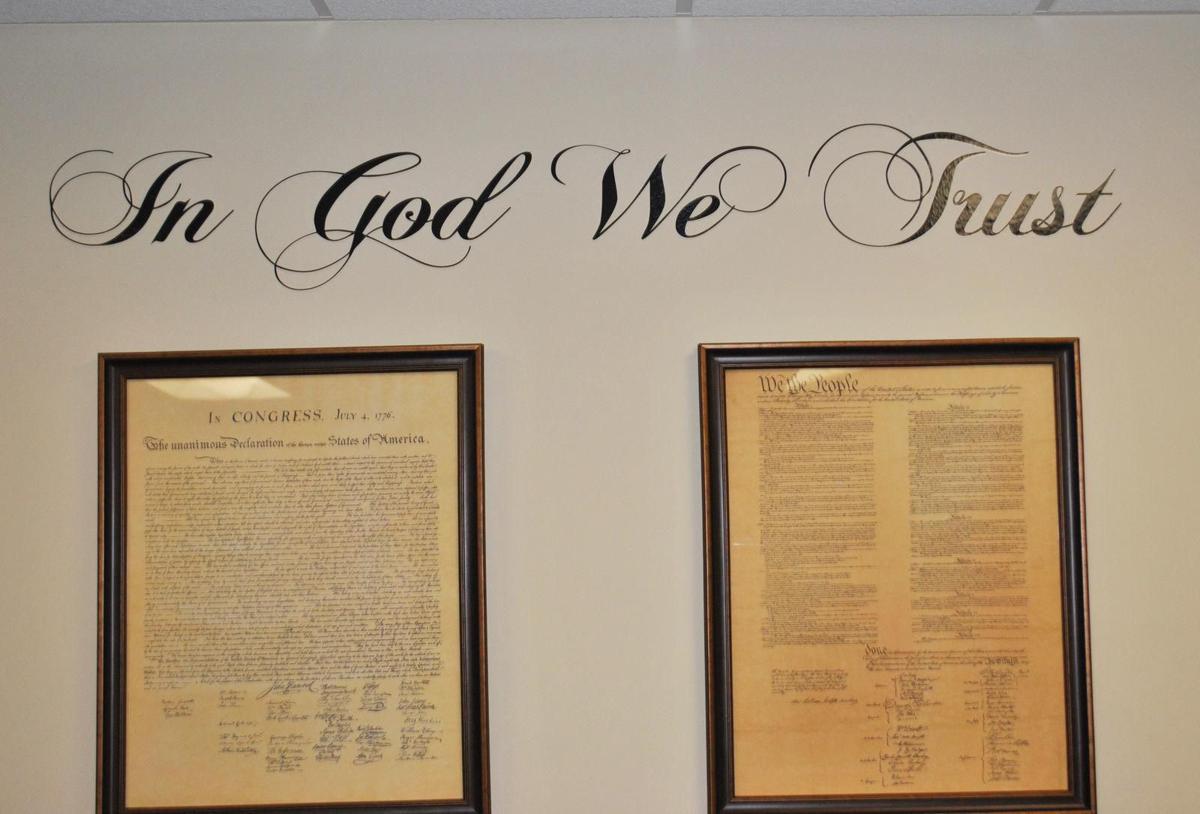 "In God We Trust" first appeared on United States currency in 1864, at the height of the Civil War, before it was adopted as the national motto during the advent of the Cold War in 1956.

The text, which is part of the little-sung fourth verse of the "Star-Spangled Banner," appears in the U.S. House of Representatives and on the outside of the U.S. Senate chamber.

It didn't appear in impossible-to-miss, giant block lettering above the Adams County Treasurer's Office in Hastings until late 2018, however.

"I think, for the most part, everyone's been fine with it," said Melanie Curry, who just began a second term as the Adams County treasurer.

Nearly 90 Nebraska counties have hung the national motto in their courthouses, or stated their intentions to do so, over the last four years when a Holt County woman took up the call to lead the initiative.

With only a few of Nebraska's 93 county courthouses left, the effort has apparently shifted to the state's public schools.

A bill (LB73) introduced by Sen. Steve Erdman of Bayard would require schools to display "In God We Trust" signs or posters in classrooms or common areas "where each student shall be able to see and read it each day school is in session."

Erdman, an ardent conservative from western Nebraska, said Monday his bill "has nothing to do with religion."

Instead, he said "In God We Trust" is a patriotic expression federal courts have said doesn't violate the First Amendment -- one that Christians, Jews and Muslims can get behind.

Mississippi began mandating schools put "In God We Trust" in its schools in 2001, with Virginia following a year later.

Several other states, primarily in the Bible Belt, have considered or passed similar legislation in recent years, while a handful more are working on the issue now, a priority of the Congressional Prayer Caucus Foundation called "Project Blitz."

According to the foundation's website, Project Blitz's goal is "to protect the free exercise of traditional Judeo-Christian religious values and beliefs in the public square, and to reclaim and properly define the narrative which supports such beliefs."

Since 2016, Pennsylvania, Alabama, Louisiana and Arkansas -- which requires the motto be included alongside the American flag and state flag in all buildings maintained by state funds -- have passed laws requiring or encouraging the display of "In God We Trust" in public schools.

Tennessee lawmakers approved a measure last year requiring the motto be displayed for students in high-traffic areas like the cafeteria or common area.

One lawmaker who voted for the Tennessee bill, Rep. Terry Lynn Weaver, said the national motto "will help future generations of students better understand the importance of faith and remind them that the very bedrock of our nation was built on the principles of the God of the bible."

As part of its efforts, Project Blitz aims to encourage and support conservative lawmakers who introduce bills "to fully protect religious liberty and the free exercise of our faith in the public square," as well as "to see the public discourse related thereto understood and defined on our terms."

Erdman, who said he believes students were safer and better educated before "we took God and prayer out of the schools in the '80s," said he did not work with Project Blitz or the Congressional Prayer Caucus Foundation on his bill.

Rather, he said he was inspired by several counties, like Kimball and Morrill counties in his own District 47, as well as neighboring Scotts Bluff County -- which have placed "In God We Trust" in their courthouses in recent years.

Those efforts have been at the urging of Barb Otto, who has zig-zagged the state on behalf of the nonprofit In God We Trust ~ America Inc. to lobby county boards to take up the cause.

"It's been a very, very successful endeavor," said Otto, who has received commitments from 87 of Nebraska's 93 counties in three years. "I think probably just about all the counties have approved it; I don't know if all of them have got the signs done."

Otto said the national motto has received three affirmation votes from Congress, most recently in 2011 when President Barack Obama was in the White House.

"In God We Trust" isn't exclusionary, Otto said, and doesn't violate the separation of church and state, even though she points out that specific phrase "is not in the Constitution."

"There's really nothing in the Constitution that makes a big deal about this," Otto said in a phone interview.

But Annie Laurie Gaylor, co-founder and co-president of the Freedom from Religion Foundation, called Erdman's bill part of "an unfortunate trend by a cabal of Christian nationalist groups."

"They have a very systematic campaign to amend state laws to inject theocratic language into bills," Gaylor said in a phone interview. "They start with this kind of bill and then it gets worse."

The Freedom from Religion Foundation, which is based in Madison, Wisconsin, said bills requiring "In God We Trust" to appear in public school settings are coercive, and "usurp the authority and right of parents to decide if and when to expose their children to religion," according to Gaylor.

She added the bills seem to suggest that "to be a good citizen, you have to believe in God, and if not, you're a second-class citizen."

Erdman's bill, which will go before the Education Committee on Tuesday, has a long journey to travel before it becomes law. Gaylor said the Freedom from Religion Foundation will fight it.

If LB73 does become law and faces legal challenge, the proposal requires the Nebraska Attorney General's Office to defend the state in court.

Erdman said that means there won't be an added cost to taxpayers.

OMAHA — The archbishop of Omaha has recommended a new sex education curriculum for Catholic schools that opposes homosexuality and same-sex marriage.

CHAPPELL — Authorities say a man stabbed outside a mobile home in Chappell has died.

WALTHILL — The moment we're called to do something important often catches us by surprise, many times in a way we least expect.

Atheists, non-believers say 'In God We Trust' has no place in Nebraska classrooms