A rendering shows the entrance to Lincoln's new high schools. The schools in southeast and northwest Lincoln will have similar designs. 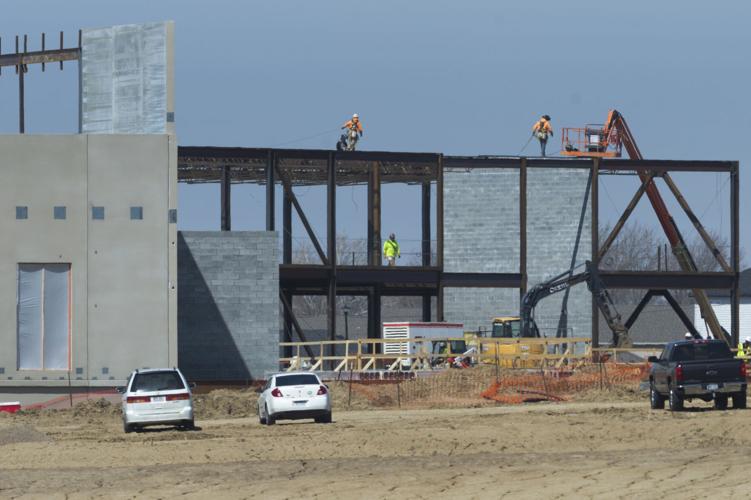 The list of possible names for Lincoln's two new high schools and an elementary school is getting considerably shorter and includes Native leaders, directions, educators and civil rights leaders.

Committees of school board and community members tasked with making recommendations to the Lincoln Board of Education, which officially approves school names, have narrowed down a list of nearly 2,500 suggestions from community members to several finalists for each new building.

The great debate over whether to stick with directional high school names or branch out to something new largely did not materialize, especially for the northwest school, though nearly all the committee members for both high schools suggested names as well as directions.

The loyalty felt by residents of Air Park and nearby neighborhoods to that northwest part of town carried a lot of weight with that committee's members.

“I think there’s strong support in this community for Northwest (High),” said Dayna Krannawitter, community coordinator for the Arnold Elementary School Community Learning Center and coordinator of the family resource center in Air Park. “I know that’s what the kids are talking about and are excited about.”

She noted that Cedric Cooper, named as the school's principal, taught at Omaha Northwest before becoming Schoo Middle School’s principal.

Three committees have a short list of names for three new schools being built in Lincoln. Their next step: Pick the ones to send to the Lincoln Board of Education for approval.

Willie Shafer, a retired teacher who served on a committee that chose names for one of the high schools built 20 years ago, said she likes directional names because naming a school after a person would complicate the selection of mascots and other identifying symbols.

“I’m going to advocate strongly for a directional school name,” she said. “I think it’s safe, I think it gives more leeway for students there.”

A favorite of several committee members was Susan La Flesche Picotte High, after the woman born on the Omaha reservation in Nebraska who became the first Native to earn a medical degree.

“I’m a big advocate for Susan La Flesche Picotte because of her back story, because of what she means for the community in general, for young women, for Natives,” said Larry Wright, chairman of the Ponca Tribe of Nebraska. “If we’re looking at a name, I can’t think of a better person.”

John Yoakum, a retired firefighter and member of the Lower Platte South Natural Resources District who grew up in the area, suggested naming the school’s health focus program after Picotte, but LPS officials said it would be named after Bryan College of Health Sciences because the college is collaborating with LPS on the new program.

In the end, the committee narrowed the suggestions to Lincoln Northwest High, Susan La Flesche Picotte High, Air Park High and Lincoln West High. Students at Schoo Middle School and Arnold Elementary School got to vote on which of those names they like best, which the committee will consider in finalizing a recommendation.

The committee for the school in southeast Lincoln leaned more toward a name honoring a person, in part because there’s already a Southeast High.

Halley Kruse, one of the committee members, noted that by the time another high school is built there would be no more directions.

“It seems like this would be the opportune time to make that break,” she said. “It would be nice if we affirmatively make that choice, not when our backs are against the wall. We are charting the course for the future.”

Many of the committee members liked Standing Bear High School, after the renowned Ponca chief who in 1879 became the first Native to be legally recognized as a person.

Several members said it was important to be sensitive to the issue of mascots, since many schools with Native mascots are changing them because they perpetuate stereotypes.

Even if the school picked an appropriate mascot, it could open the school to inappropriate comments from fans from opposing teams during athletic competitions, said former Lincoln Board of Education member Ed Zimmer.

The committee agreed to consult Native leaders about choosing the name.

Deb Schorr, a member of the Lancaster County Board, said a directional name, perhaps one with its own unique character like North Star, would make coming up with cheers much easier than naming the school after a person.

The committee also planned to poll schools in the area to allow students to weigh in with their favorites.

The games go on, but pandemic put a big dent in high school athletic budgets

Let's dance: LPS plans to hold proms this spring but guest list will be limited

Thank you, to my fifth-grade teacher

The annual Thank You Teacher Awards contained a familiar name this year: My fifth-grade teacher June Reta, whose kindness made her among my favorites.

The City of Lincoln Transportation and Utilities Department and Heartland Bike Share are partnering to offer free 60-minute BikeLNK rides to help residents get to their polling location for the local primary election on Tuesday.

Ada Robinson, who taught at Clinton for more than 30 years, garnered more than 90 nominations from community members. Letters from former students and colleagues talked about her devotion to students.

A rendering shows the entrance to Lincoln's new high schools. The schools in southeast and northwest Lincoln will have similar designs.