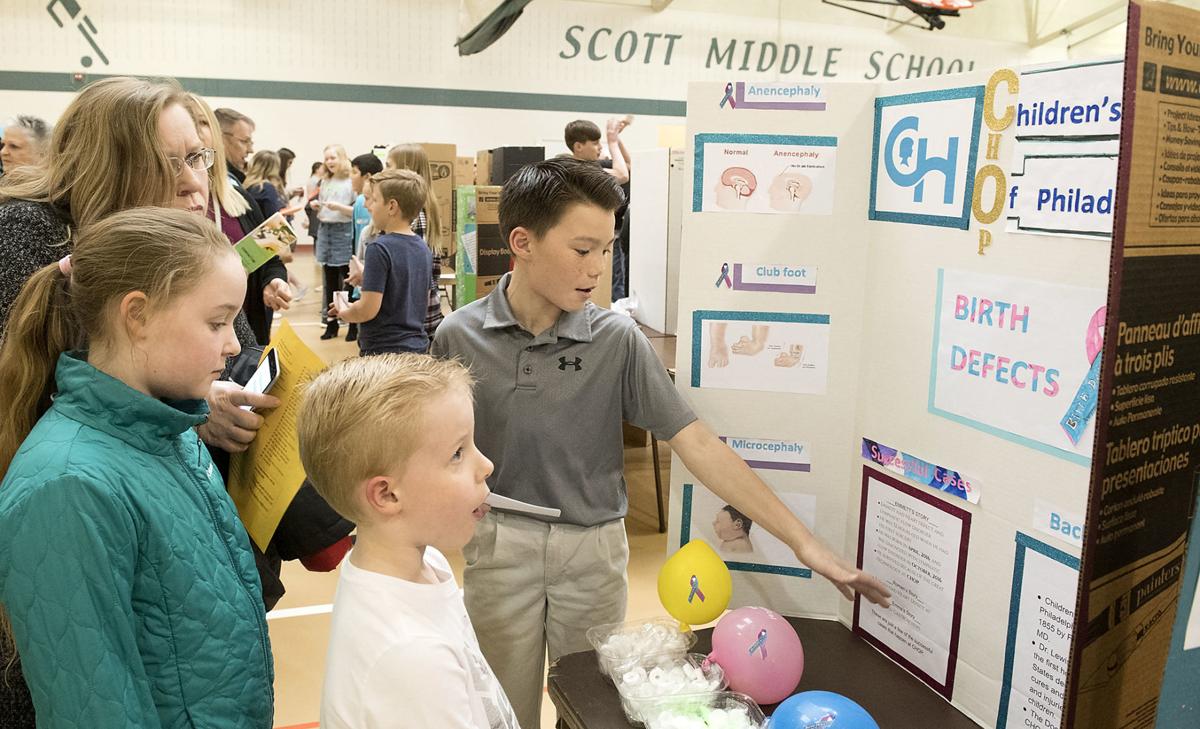 Ann Gouldie (from left), her son Spencer and daughter Ainsley listen to Scott Middle School sixth grader Jaedon Dunsmore as he gives information on Children's Hospital of Philadelphia at the annual "Make a Difference" fair  Thursday. 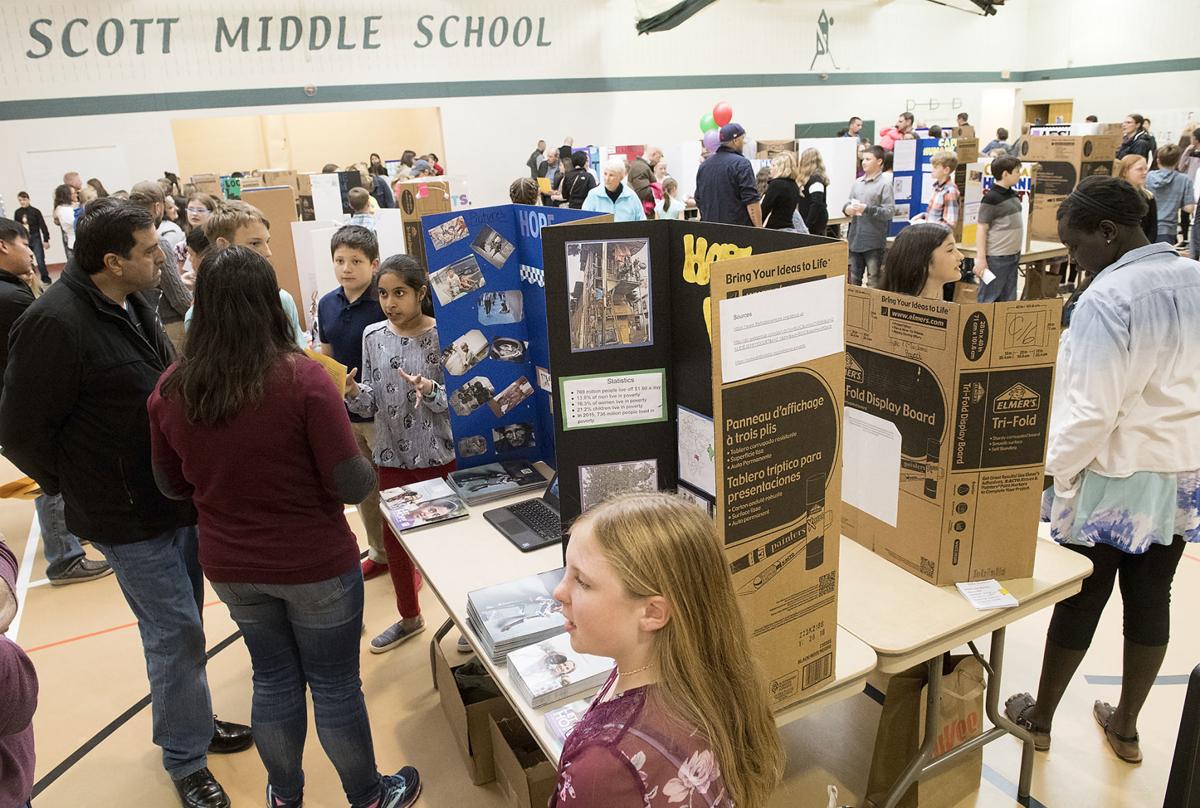 Parents and visitors to the annual "Make a Difference" fair fill the gym at Scott Middle School on Thursday. Sixth grade students organized 86 tri-fold poster boards to explain everything from suicide prevention to autism advocacy and the nonprofits that support the work. 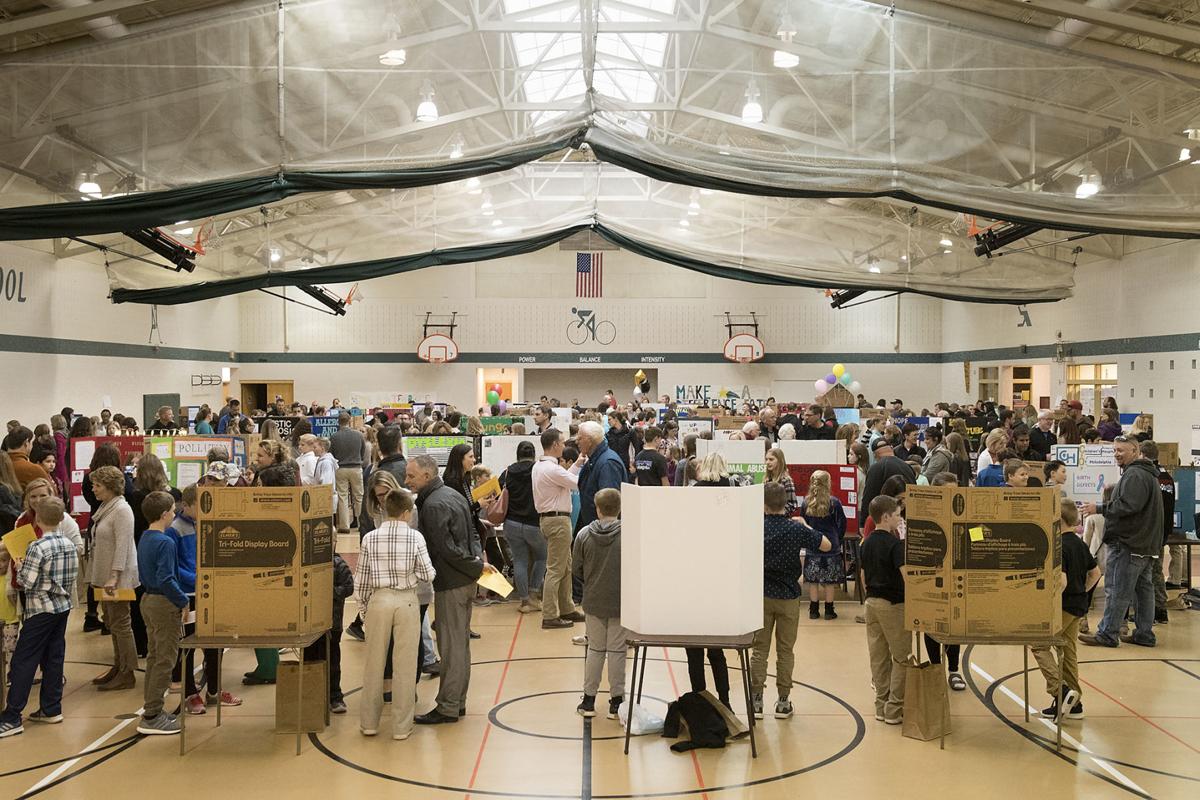 Parents and visitors fill the gym at Scott Middle School on Thursday for the annual "Make a Difference" fair. 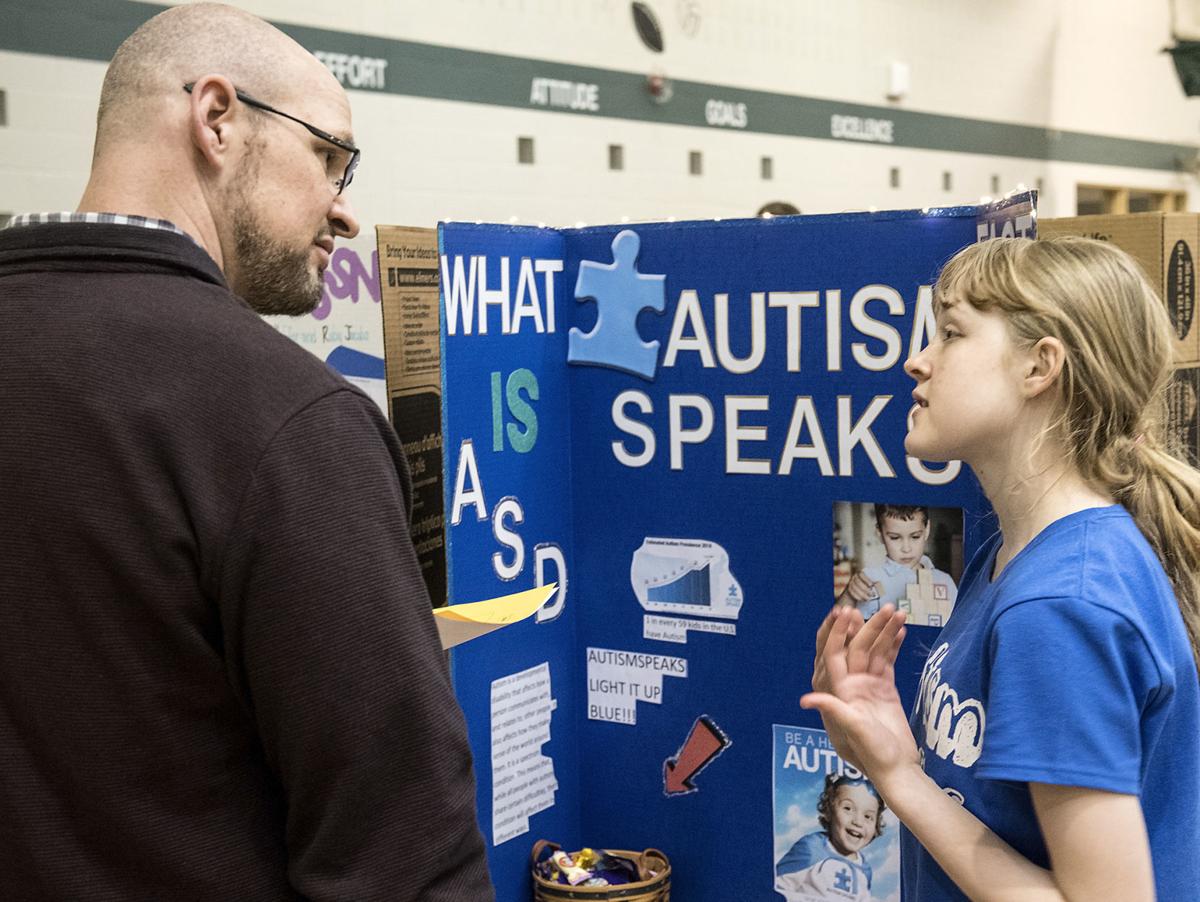 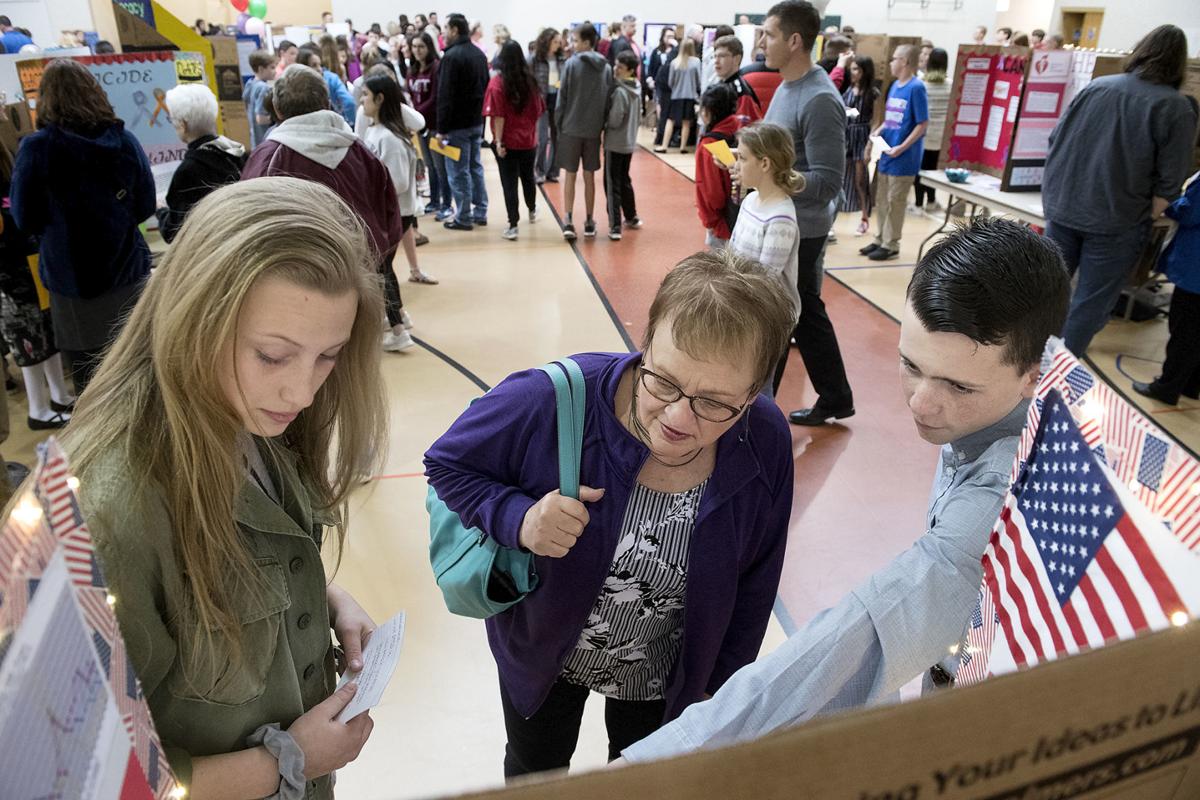 It took me eight years to get to Scott Middle School’s Make A Difference Fair and in that time, the annual project has raised more than $70,000 for local and national organizations.

That’s not bad for a bunch of sixth graders.

The fair is a culmination of a couple of writing lessons on research and persuasive arguments that teach a broader lesson about how one’s actions can make a difference.

Scott’s sixth grade teachers came up with the idea, in part because they were tiring of reading persuasive arguments about the same things — on often inconsequential topics.

“I thought, if I have to read one more paper about how fast a jaguar runs ...,” said Kim Ridder, who was among the teachers who came up with the idea for the fair.

The teachers wanted students to research something meaningful to help them understand that research and persuasive writing skills are useful and powerful tools in their lives.

So the teachers began inviting representatives from nonprofits to come to school and talk about what their organizations do and how they use the money donated to them.

Students can choose from those organizations, or pick another one to research. Often, Ridder said, students choose an organization because the work it does has some connection to their own lives.

Both Bricker Maxwell and Leo Napolitano, who were in groups that researched the Wounded Warrior Project, said they had family members in the military. So they chose to research an organization that helps veterans with post-traumatic stress disorder.

“I feel veterans and active soldiers don’t get enough recognition for what they do for our country,” said Garrett Walsh, who researched the topic with Leo.

Autumn Stock, Ellie Wells, Adyson Lawrence and Jada Frank enlightened Thursday's visitors about the prevalence and dangers of sexual assault — and about the organization that advocates for victims. They thought the topic was not discussed enough.

They were among the sixth graders who filled the Scott gymnasium Thursday with 86 tri-fold poster boards explaining everything from suicide prevention to autism advocacy and the nonprofits that support the work.

They took donations from visitors and raised $10,104 in one night.

Part of the assignment was getting people to show up.

They wrote to public officials — both the governor and mayor have contributed in the past — and they wrote to reporters.

They blanketed the newsroom with letters to several reporters educating us on the issues and inviting us to attend and publicize their event.

The letters worked — and Ridder believes the fair's lesson has stuck, that kids have continued to be involved and make community service a part of their lives.

One year, a student had a birthday party and asked for donations to the organization she’d researched in lieu of presents.

The programs will increase the number of CLCs to 29, three of which will now be at high schools. All the participating schools are eligible for federal Title I money available to schools with high levels of students living in poverty.

North Star is the only high school that now offers the before- and after-school program, which is geared toward helping kids think about their post-high school plans.

The CLCs are different from traditional before- and after-school programs because they’re supported by community agencies, LPS, federal funds and grants, and their programming is tied more closely to what’s happening in the school and to the needs of families and the neighborhoods.

Lincoln may have dodged the flooding and blizzards that devastated other parts of the state this winter, but Lincoln Public Schools doubled its snow-removal costs this year.

Operations Director Scott Wieskamp said the district spent about $300,000 on snow removal this winter: $200,000 of that was overtime for grounds and custodial crews and another $100,000 for materials.

Like many homeowners who had to scour stores for ice melt, the district couldn’t find what it needed. It had to borrow some of the material it put on streets, parking lots and sidewalks.

“We owed the city eight semi-loads of product because we didn’t have enough,” Wieskamp said.

So Mother Nature, I think I speak for the entire state when I say enough with the snow already.

Cindy Lange-Kubick: Future doughnut makers — and leaders of Lincoln — in need of volunteers

The Tri-Nuggets are going global.

Northwest Lincoln residents asked to weigh in on solutions to overcrowding

Nearly 20 years ago, Jose Antonio Vargas was a high school senior in California with a secret that was getting harder to keep.

The city and Lincoln Public Schools will each contribute $1.09 million to the interlocal agreement created to improve school safety, a 4% incr…

Ann Gouldie (from left), her son Spencer and daughter Ainsley listen to Scott Middle School sixth grader Jaedon Dunsmore as he gives information on Children's Hospital of Philadelphia at the annual "Make a Difference" fair  Thursday.

Parents and visitors to the annual "Make a Difference" fair fill the gym at Scott Middle School on Thursday. Sixth grade students organized 86 tri-fold poster boards to explain everything from suicide prevention to autism advocacy and the nonprofits that support the work.

Parents and visitors fill the gym at Scott Middle School on Thursday for the annual "Make a Difference" fair.