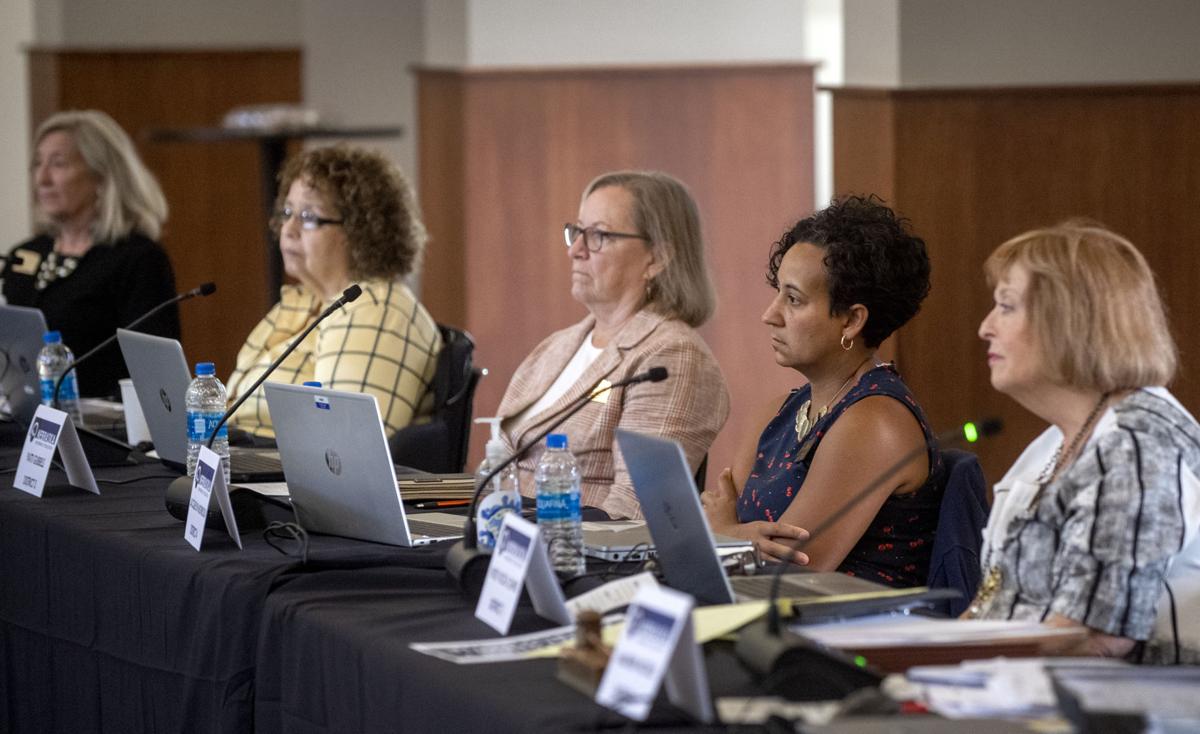 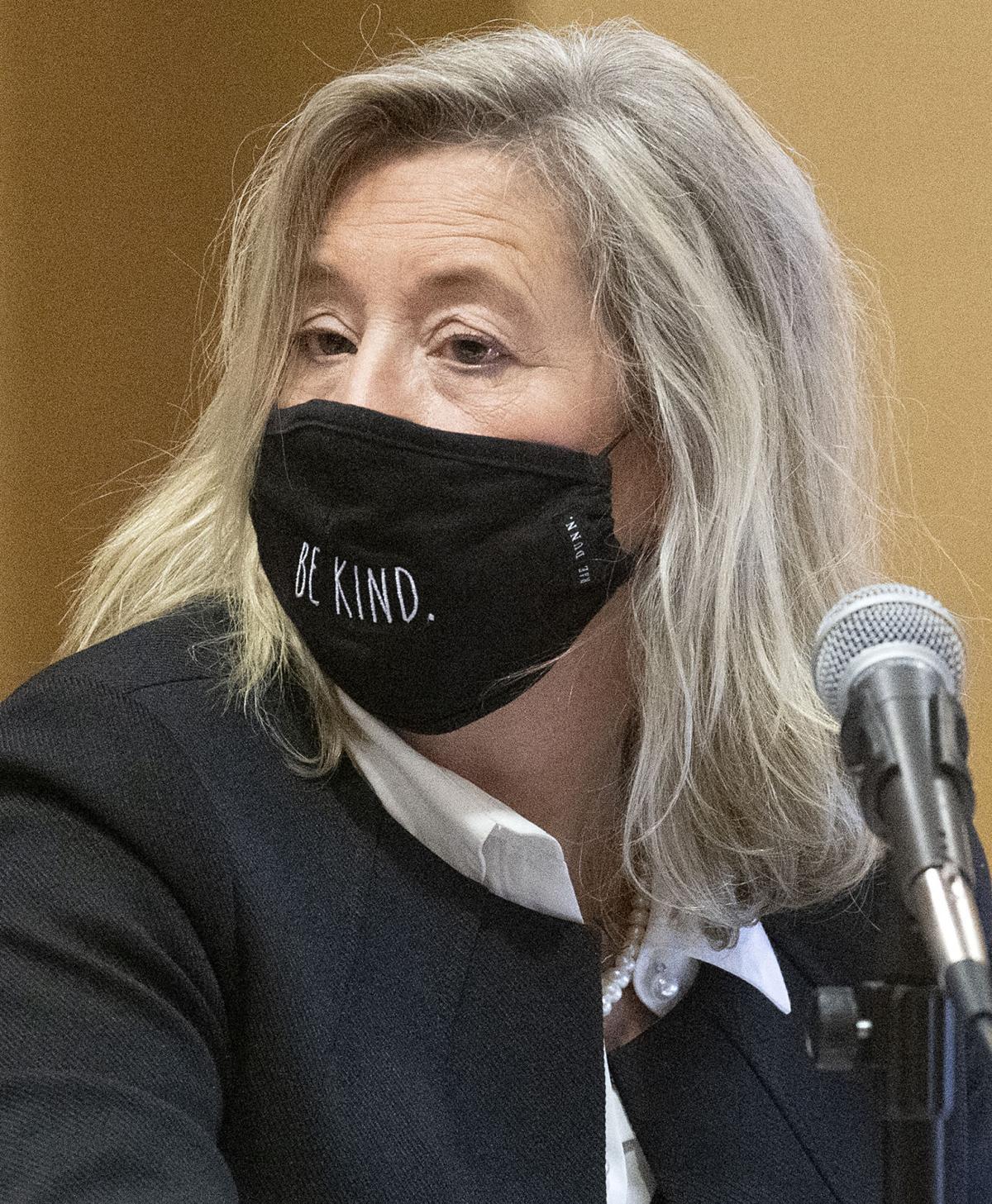 Nebraska State Board of Education member Deborah Neary listens during the public comment period about the health standards draft on April 2 at the board's meeting at the Courtyard Marriott.

Recently surfaced documents shedding additional light on how the Nebraska Department of Education drafted its proposed health standards have revived criticism of a process that eventually hit a dead end.

Emails and text messages obtained by the Omaha World-Herald spell out how the department arrived at the first draft of the standards, which led to a maelstrom of backlash for including lessons on gender identity and sexual orientation.

The department eventually eliminated many of the controversial sex education references that critics called ideological under the human growth and development portion of the draft standards this summer before the Nebraska Board of Education halted the process altogether in September.

The emails show how Nebraska Board of Education member Deborah Neary of Omaha coordinated with the department to include experts on comprehensive sex education in the process in September 2019. The department eventually named them to an advisory team that aided a group of educators tasked with writing the standards.

Lisa Schulze, an education and training manager of the Women's Fund of Omaha who formerly worked for Planned Parenthood, was one of those advisers.

Schulze is one of two people in Nebraska who is a certified by the American Association of Sexuality, Counselors and Therapists, which is why it made sense for her to advise the writing team, said Jo Giles, executive director of the Women's Fund of Omaha.

According to the World-Herald report, Neary also coordinated a workshop for state education board members and the writing and advisory groups with Jennifer Driver, who helped co-author the National Sex Education Standards, a comprehensive set of standards from which the writing group borrowed heavily.

Gov. Pete Ricketts, who spearheaded statewide town halls to oppose the standards, called out the process in the Washington Free Beacon, a conservative news website that published a scathing piece on the process and Schulze's involvement.

"These advocacy groups definitely have an agenda they are pushing — and it is one that sexualizes children," Ricketts told the Washington Free Beacon. "This was never about the parents — it was about the advocates."

The emails also show how department employees reacted to pressure from the Nebraska Catholic Conference to view the first draft under development and the list of the advisers.

Jeremy Ekeler, associate director of education with the Nebraska Catholic Conference, told the World-Herald he met with officials but was not allowed to see the draft in progress or a list of advisers, even though Schulze — who praised the standards — was able to review it.

Ekeler also said he supplied a list of experts for the department to consult, but said they were not contacted.

Wrote one department staffer to another: "Jeremy is coming on pretty strong," to which the colleague replied, "I really think they want to advocate for abstinence-only education as well as gender identity, sexual orientation, etc.; but that is only my assumption."

Ekeler told the Journal Star on Monday he had recently joined the Nebraska Catholic Conference when he reached out to the education department and was merely trying to connect with people on the process.

He said it's not just about giving the Nebraska Catholic Conference representation, but any group or person who has sincerely held beliefs on character formation, parental rights, abstinence and traditional marriage.

"The point is you've got to have everybody at the table," he said.

In a joint statement Monday, the Nebraska Catholic Conference and Nebraska Family Alliance said the emails revealed "there was a game being played, and it was fixed.

"Nebraskans deserve better and expect accountability from public officials and taxpayer-funded staff who put activist agendas ahead of parental rights. It's easy to blame the process, but it's not just the process that needs changing, it's the people," the statement read.

The emails also show how Neary and Schulze worked to combat criticism after the draft was eventually released, with Schulze even providing the board with talking points to defend the standards at rancorous board meetings.

Members of the writing team, which was comprised of educators involved in drafting other portions of the standards — including lessons on injury prevention, nutrition and mental well-being — raised concerns about the standards via email as well.

David Jespersen, education department spokesperson, told the World-Herald that the writing group met several times to discuss the entire document and had opportunities to provide feedback.

Jespersen could not be immediately reached for comment Monday.

After the vast majority of public feedback — both at board meetings and through emails and surveys — opposed the standards, the Nebraska Department of Education eventually released a revised draft this summer that stripped much of the references to sex education, but it did little to restore public faith in the process.

The second draft also drew pushback from LGBTQ advocates — like the Women's Group of Omaha — who felt the revised draft was not inclusive enough and left out key protections for LGBTQ youths.

In September, the Nebraska Board of Education decided against going forward with a third draft, voting to halt the process entirely until the pandemic passes. At last Friday's meeting in Lincoln, board members indicated they would like to see the process reviewed.

This is the first time the department attempted to formalize health standards, which it is not required to do. If the board had moved forward with approving them, which it originally planned to do this fall, schools would have adopted the standards on a voluntary basis.

Dozens of districts had already indicated their opposition to the standards, with some joining opponents in calling for the standards to be scrapped entirely.

'A win-win' — In age of workforce shortages, student teachers get leg up in landing job at LPS

More than 50 LPS student teachers took part in a symposium that gives prospective candidates help in landing a position. "We get to pull the curtain back a little and tell them what teaching at LPS is like," one LPS official said.

Before the pandemic, parents rarely filled local and state board rooms. But now an agitated, mobilized and partisan public is showing up in numbers, shouting, clapping, cheering and sometimes jeering.

He was arrested on suspicion of first-degree sexual assault after a state lab report showed his DNA was present in the woman's sexual assault evidence collection kit, according to police.

The jury of eight women and four men reached a verdict mid-morning, rejecting the self-defense argument as well as the state's assertion that it was first-degree murder.

Matthew Hecker, the chief administrative officer of the Diocese of Lincoln's schools, said the transition will allow him to take on more duties as the diocese's first permanent deacon.

The Nebraska Association of School Boards and Gov. Pete Ricketts said threats and acts of violence against school officials should be dealt with by local law enforcement, not the federal government.

Nebraska State Board of Education member Deborah Neary listens during the public comment period about the health standards draft on April 2 at the board's meeting at the Courtyard Marriott.