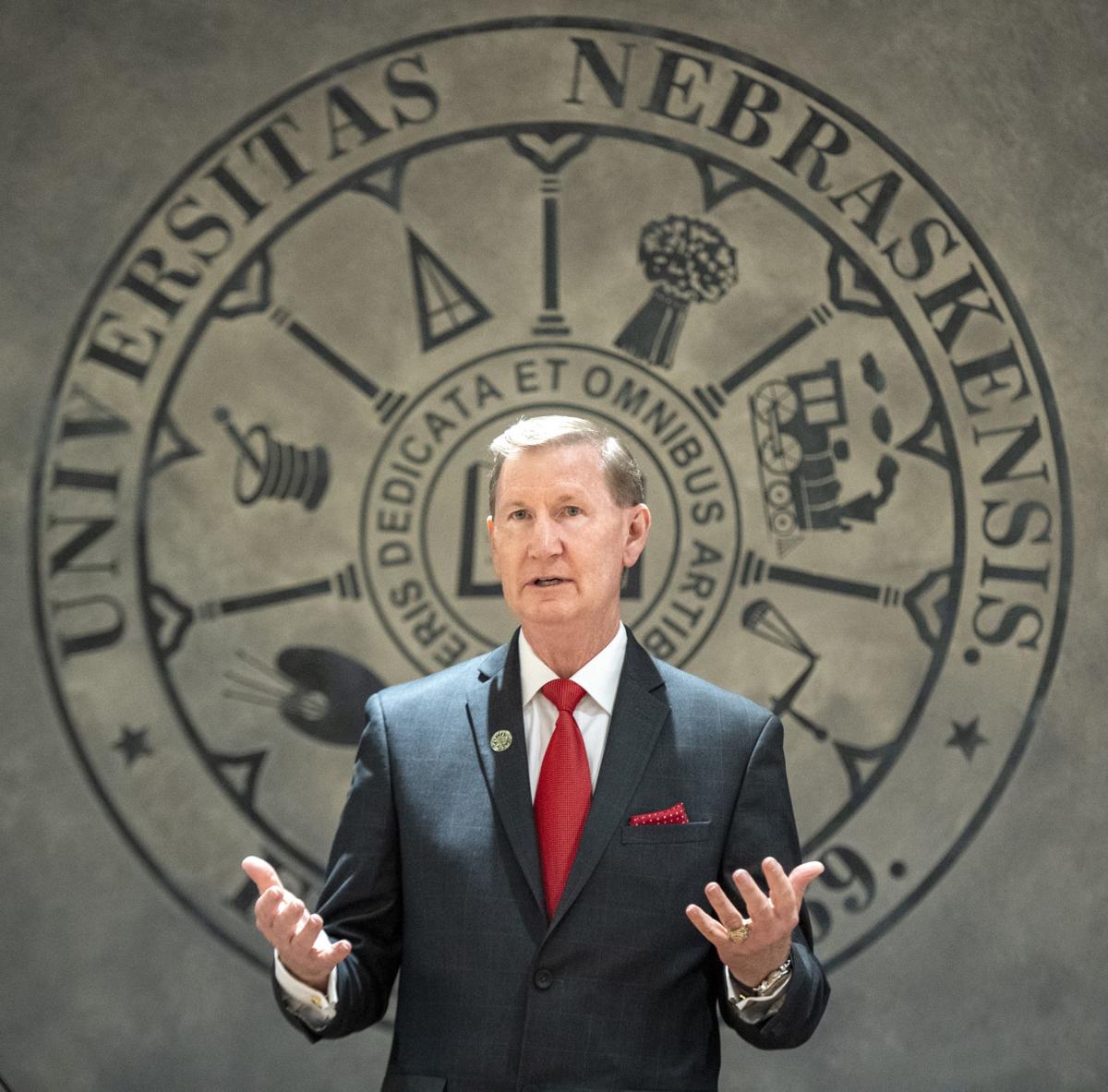 Walter "Ted" Carter Jr., the priority candidate to be the next president of University of Nebraska, speaks at a news conference announcing his selection at Varner Hall on Oct. 25. 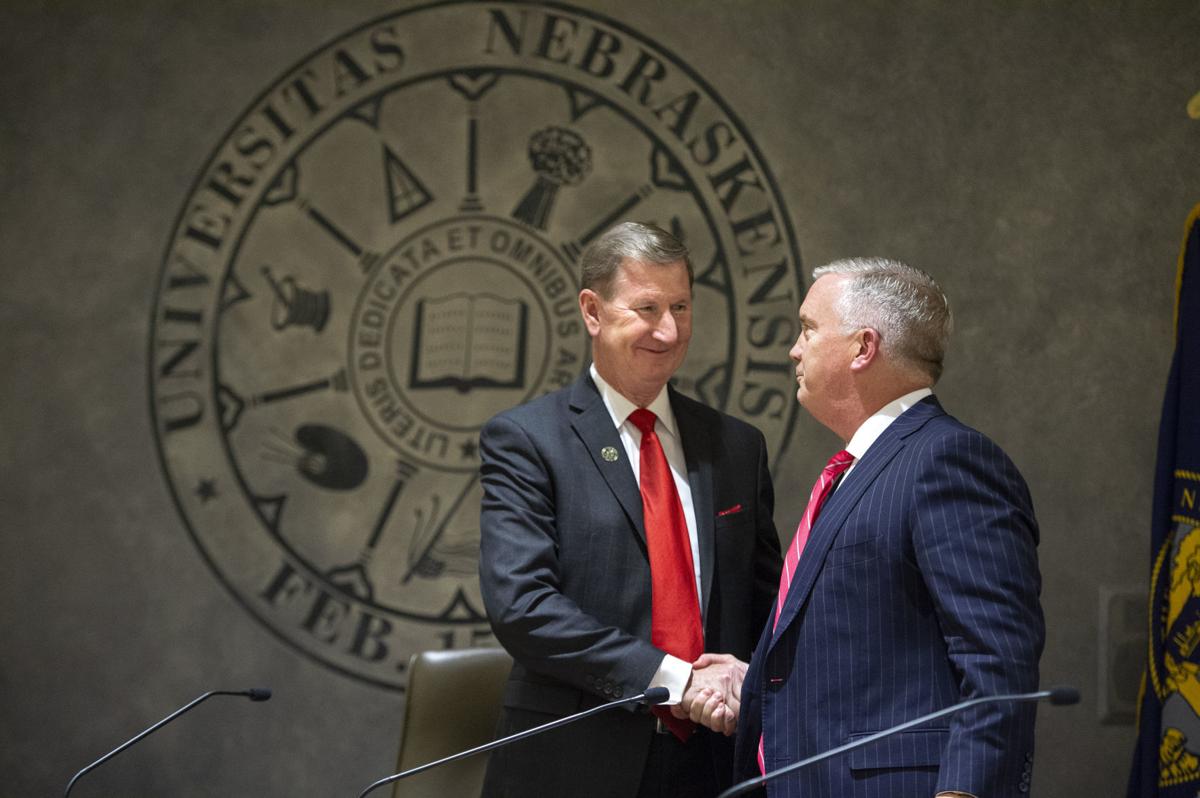 Walter E. Carter Jr. (left), the priority candidate to be the next president of University of Nebraska, shakes hand with Regent Chairman Tim Clare after a news conference at Varner Hall on Friday. 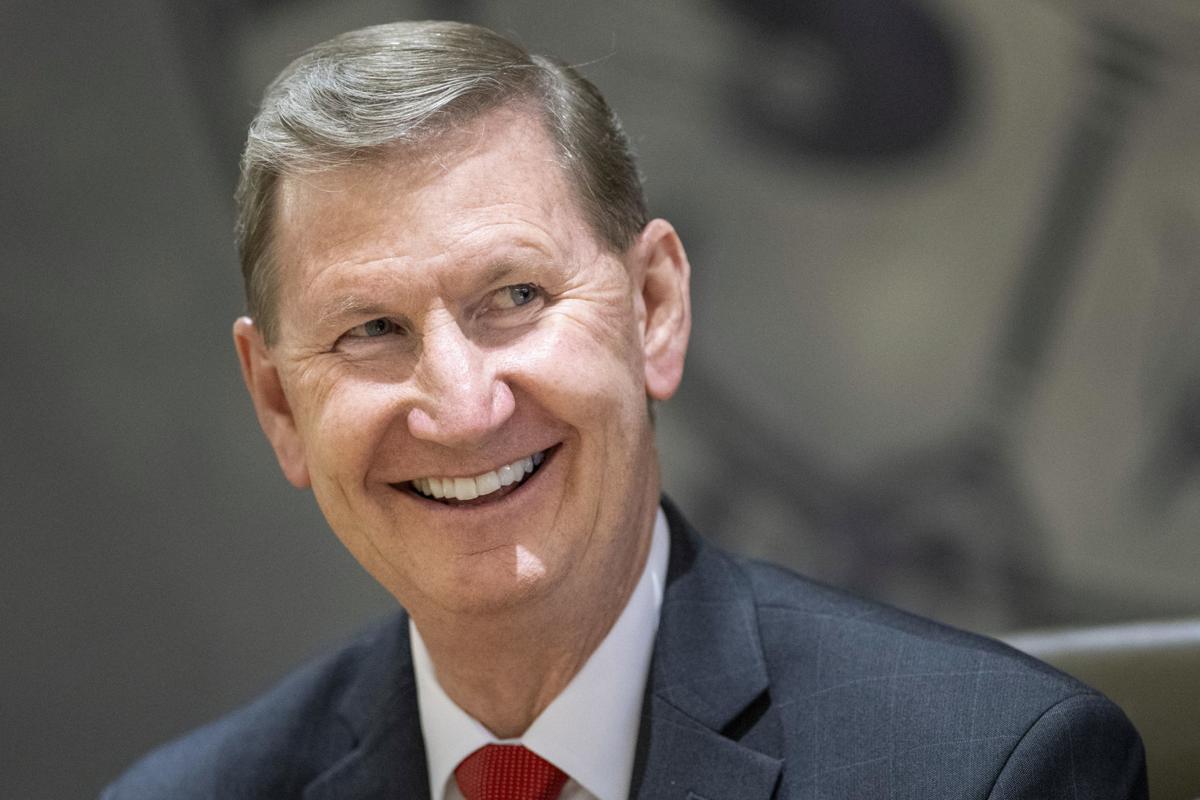 Ted Carter is the new president of the University of Nebraska. 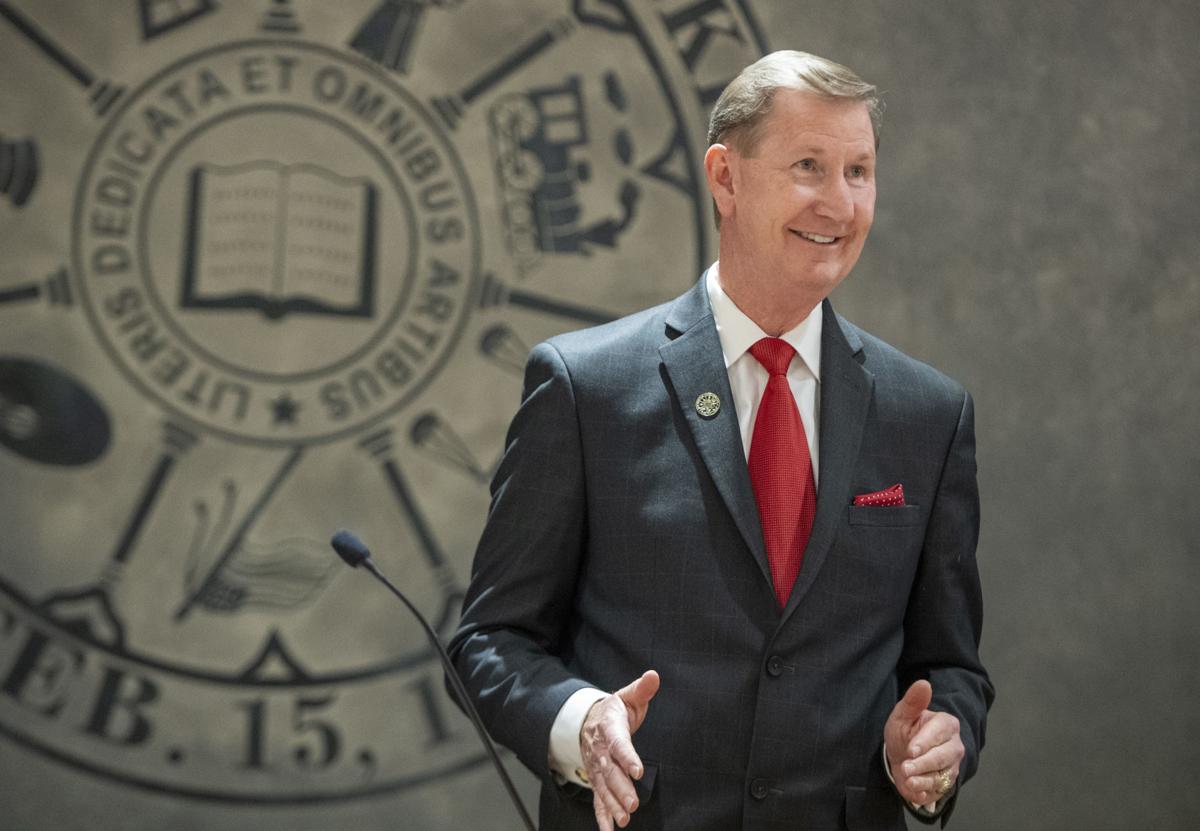 Walter "Ted" Carter Jr., the priority candidate to be the next president of the University of Nebraska, speaks at a news conference at Varner Hall on Friday. 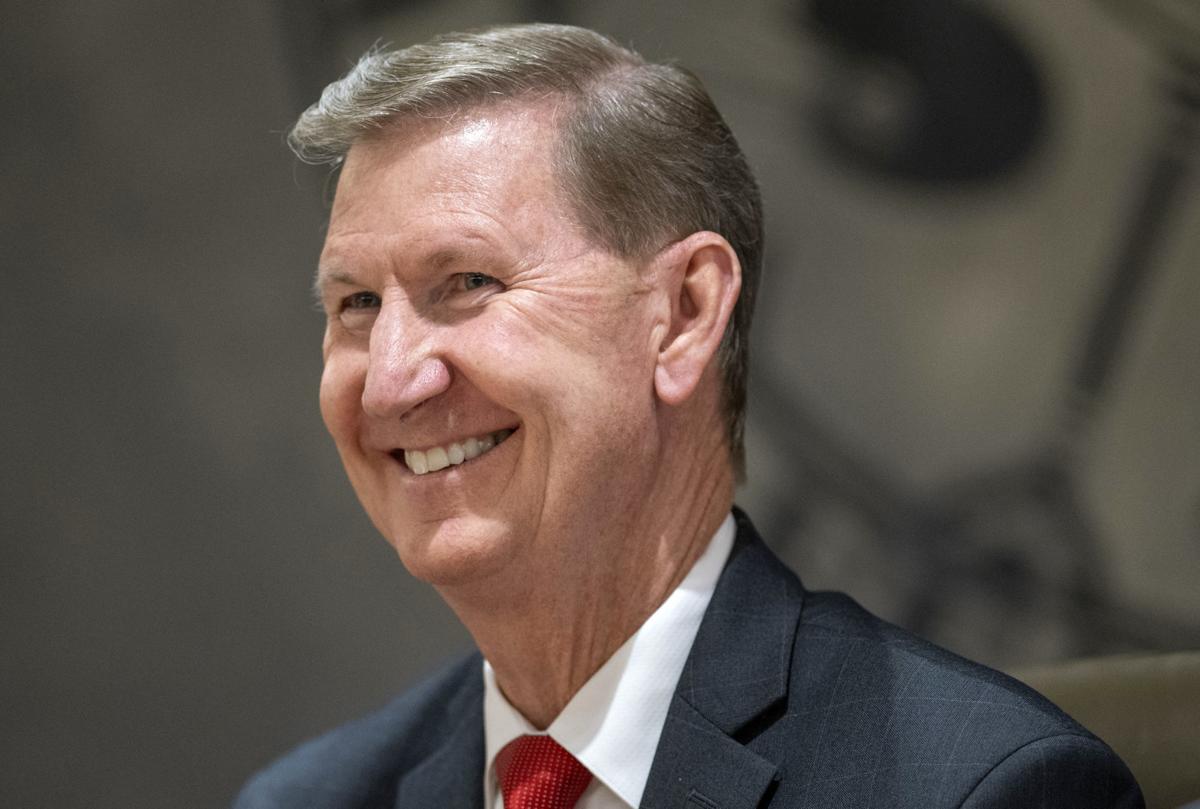 Walter E. Carter Jr., the priority candidate to be the next president of University of Nebraska, smiles at a news conference at Varner Hall on Friday. 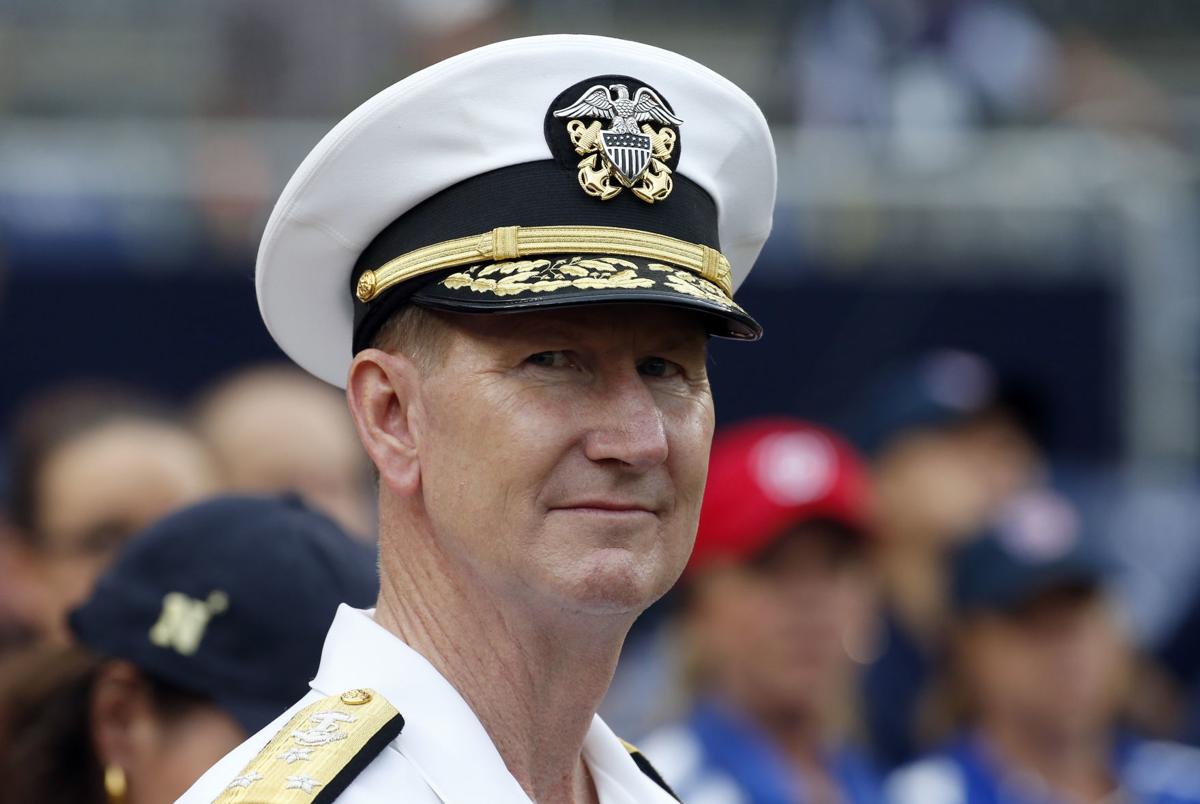 As a commissioned officer fresh out of the U.S. Naval Academy in Annapolis, Maryland, Walter E. Carter Jr. went to Pensacola, Florida, to earn his gold wings as a fighter pilot.

The young navy man’s career at the stick of an F-4 Phantom ended before it began, however, after Carter failed his first eye test.

While it marked the end of one career, it launched the beginning of another.

The U.S. Navy, rather than kicking Carter to the side, found a path for him in a program for naval flight officers. He began riding backseat in the two-seat cockpits, eventually working his way through the Navy Fighter Weapons School — known to most as “Top Gun” — in 1985.

“That’s where I realized there was a higher calling for me in the teaching and learning space,” Carter said.

Top Gun, unlike the 1986 movie starring Tom Cruise, isn’t so much about being the “best of the best,” he added, but becoming “a teacher at another level,” an educator in the backseat of jets such as the Phantom and the F-14 Tomcat.

Carter, whose call sign is "Slapshot," an homage to his collegiate hockey career, would go on to teach dozens of men and women how to fly the Tomcat without ever having the stick in his hands, he said, helping them land safely on the deck of aircraft carriers during the day or at night.

“I’ve been in the teaching and learning space based upon what I learned in Top Gun in 1985 and applying it my whole life,” he said, adding that as a teacher, he became the American record-holder for landings on an aircraft with 2,106.

Over the next three decades, Carter would fly missions from 19 different aircraft carriers, command his own as a qualified nuclear engineer and go on to become the 62nd superintendent of the Naval Academy and 54th president of the U.S. Naval War College.

Friday morning, the retired vice admiral was unanimously selected as the priority candidate to become the eighth president of the University of Nebraska, pending approval from the Board of Regents after 30 days of review.

By Friday evening, the Rhode Island native who hails from a family of educators had arrived in Lincoln with his wife of 37 years, Lynda, for an introductory news conference in Varner Hall. 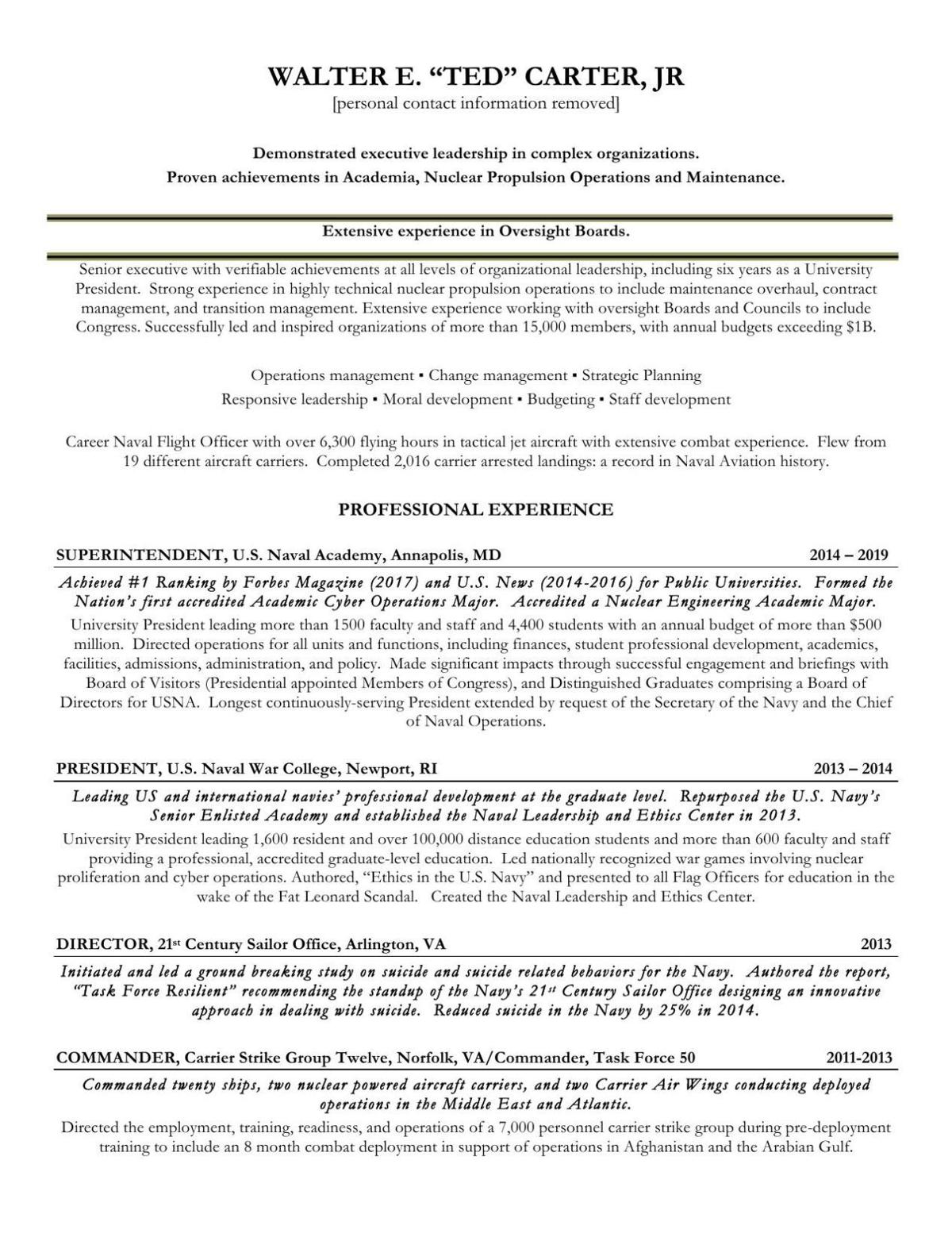 The Carters, who both grew up in families of educators, will attend Saturday’s football game against Indiana, then tour the area Sunday before returning to their home in Suffolk, Virginia, on Monday.

Carter will then return to Nebraska for an intensive two-week tour of the state, including meetings with NU students, faculty and staff, as well as other university stakeholders, philanthropists, business leaders — what he refers to as “spheres of influence” — beginning Nov. 1.

“We are humbled, excited, and a little bit in awe,” said Carter, who goes by Ted.

If approved by regents at a meeting after the 30-day vetting period, Carter would succeed former NU President Hank Bounds, as well as interim President Susan Fritz, who would return to her position as executive vice president.

Regent Tim Clare of Lincoln said the board has not discussed when such a meeting would occur. The 30 days mandated by state law would be up Nov. 24, meaning regents could call a special meeting at that time. The next regular meeting of the board would be Dec. 6.

For now, regents and the search committee want the focus to be on what they called Carter's history of servant leadership and high level of personal and professional integrity.

Leading the Naval Academy for five years — superintendents are appointed to four-year terms; Carter is the first to serve an additional year — was “the highest calling of my life” because of what it meant for elevating higher education in the U.S., he said.

“I thought that’s where my relationship with higher education would end,” Carter said. While he had seen other opportunities open up, none spoke to him until he saw the opening for president of the University of Nebraska system, which has campuses in Lincoln, Omaha and Kearney, as well as the Nebraska College of Technical Agriculture in Curtis.

That was four weeks ago. Carter applied and quickly emerged as a top candidate, members of the 23-person Presidential Search Advisory Committee said.

“We were just flat blown away,” said Regent Jim Pillen of Columbus, who chaired the committee, by Carter’s compassion for other people, particularly in the higher education sector. 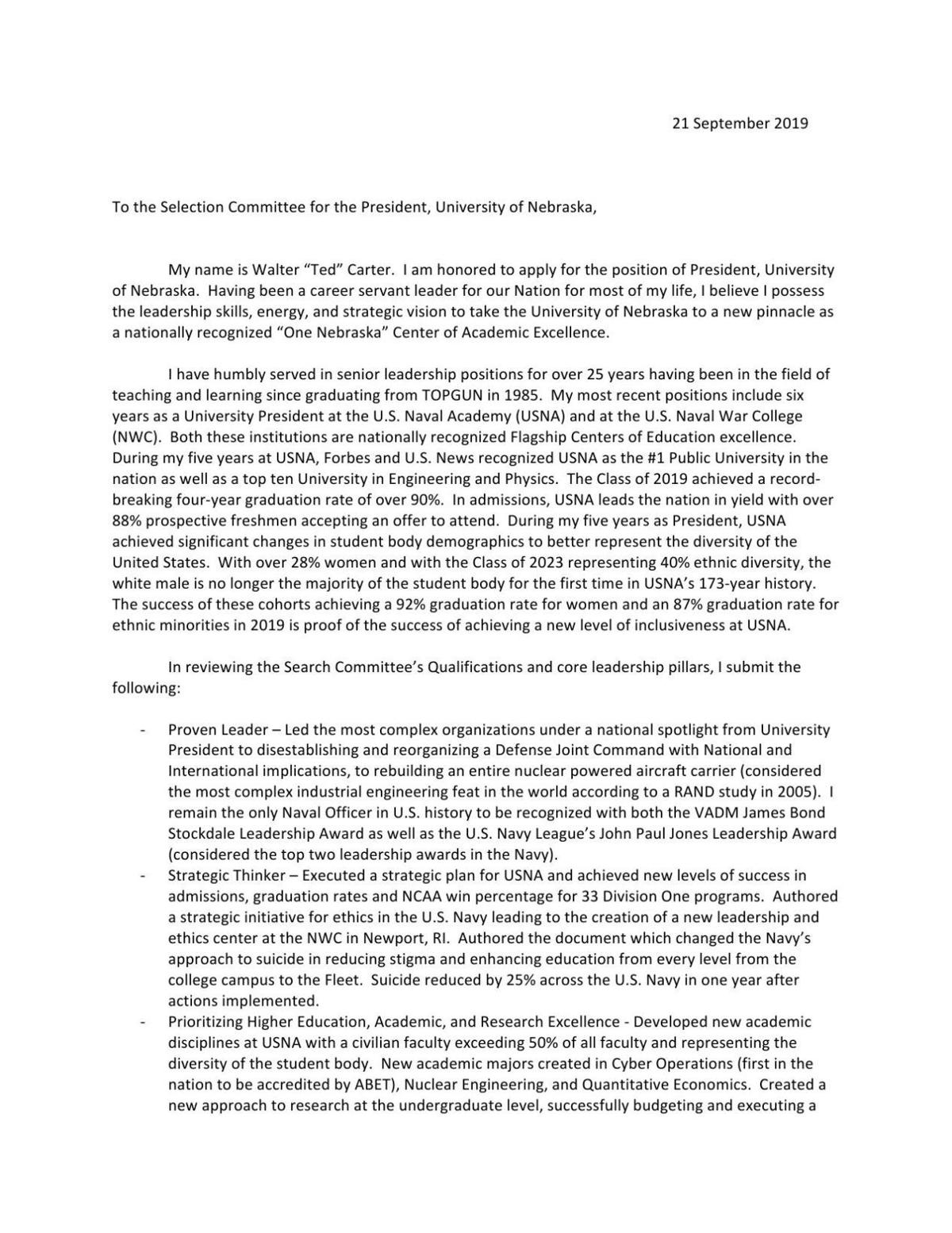 Search committee member Aya Yousef, a student regent from the University of Nebraska at Omaha, said Carter places student and student outcomes at the forefront of his focus as a higher education leader, while committee member Tonn Ostegard, CEO of Crete Carrier Corp., said Carter could command a room while offering insightful words that sparked imagination.

Unlike previous presidential searches, regents did not require candidates to have a terminal degree in their field, or experience teaching in a traditional classroom or leading at a public university, opening the door for more nontraditional choices for the job.

Most of the other nontraditional applicants could not connect their practical experience to running a university system with 51,000 students, 14,000 employees and an annual budget of $2.6 billion, said Dawn Mollenkopf of the University of Nebraska at Kearney.

Carter oversaw the Naval Academy’s four-year graduation rate top 90%, has directed the institution to become more diverse both in its student body — he said white males are no longer the majority at the school — as well its faculty, roughly half of which are now “civilians.”

The goal was to make the academy reflect the nation as a whole, he said, as a diverse place with midshipmen from a variety of geographic, racial and religious backgrounds, as well as of different genders and sexual orientations.

Across the NU system, Carter said he would push to make campuses more representative of the country as a whole, and assess what supports are necessary to ensure all student populations are successful.

“I want to see young people come here, not just Nebraskans, but other Americans and even our international friends,” he said.

When they get to campus, Carter said he would turn NU’s focus to viewing students as customers and not products of the institution. Using that approach at the Naval Academy, Carter directed the creation of a Center for Academic Excellence, which helped midshipmen improve in the classroom through tutoring and support services.

Acknowledging he wasn’t the best student in college — his Naval Academy transcript is dotted with mostly B's and C’s, as well as a few D’s — Carter said he understands the benefit of second chances to students who need time to mature.

At the Naval Academy, he expanded mental health resources to aid students in being more successful — something he said is important for all students regardless of background.

Carter also told a Congressional panel the academies must do more to address reports of sexual misconduct on campus, acknowledging the growing number of reports among the military in recent years, and has helped pen changes to the Navy’s approach to preventing suicide through reducing stigma and enhancing education. Suicide rates among Navy enlistments fell 25% in the first year after the guidelines he helped develop were implemented.

Those efforts were only achievable through a team-building approach, Carter said, one he would replicate at NU as he seeks to “raise the brand” of the state’s only public university system.

“The University of Nebraska has a rich history of serving the needs of the state, and an opportunity to do even more in the future,” he said. “I am humbled by the confidence of the search committee and Board of Regents, and I look forward to a conversation with Nebraskans about how we can make a difference for the next generation of students.”

Carter to begin forums as part of 30-day vetting process

Being designated the priority candidate by the Board of Regents was just one step in the process to become the next University of Nebraska president.

Walter "Ted" Carter Jr. is not, strictly speaking, a nontraditional candidate to become the next president of the University of Nebraska system.

The choice to become the next president of the University of Nebraska spoke about his life growing up in a family of educators, his love of le…

The 30-day vetting period for Ted Carter as priority candidate for president of the University of Nebraska ends Sunday, giving members of the …

Total pay for next NU president could reach $1.2 million

Walter "Ted" Carter Jr., the priority candidate to be the next president of University of Nebraska, speaks at a news conference announcing his selection at Varner Hall on Oct. 25.

Walter E. Carter Jr. (left), the priority candidate to be the next president of University of Nebraska, shakes hand with Regent Chairman Tim Clare after a news conference at Varner Hall on Friday.

Ted Carter is the new president of the University of Nebraska.

Walter "Ted" Carter Jr., the priority candidate to be the next president of the University of Nebraska, speaks at a news conference at Varner Hall on Friday.

Walter E. Carter Jr., the priority candidate to be the next president of University of Nebraska, smiles at a news conference at Varner Hall on Friday.