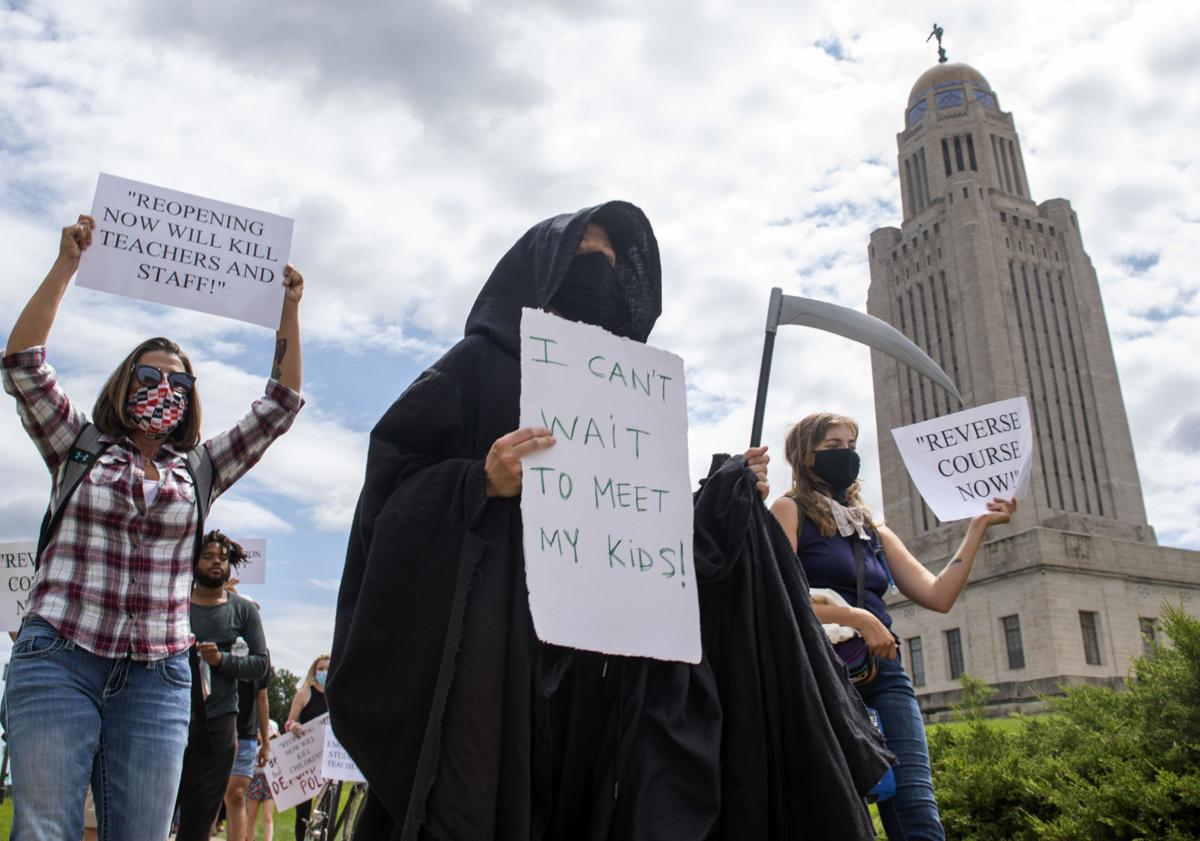 Parent and Lincoln Public Schools teacher Ellen James (center) as the Grim Reaper leads the march from the state Capitol to the Governor's Mansion on Monday. Protesters were calling for more safety protocols before reopening schools. 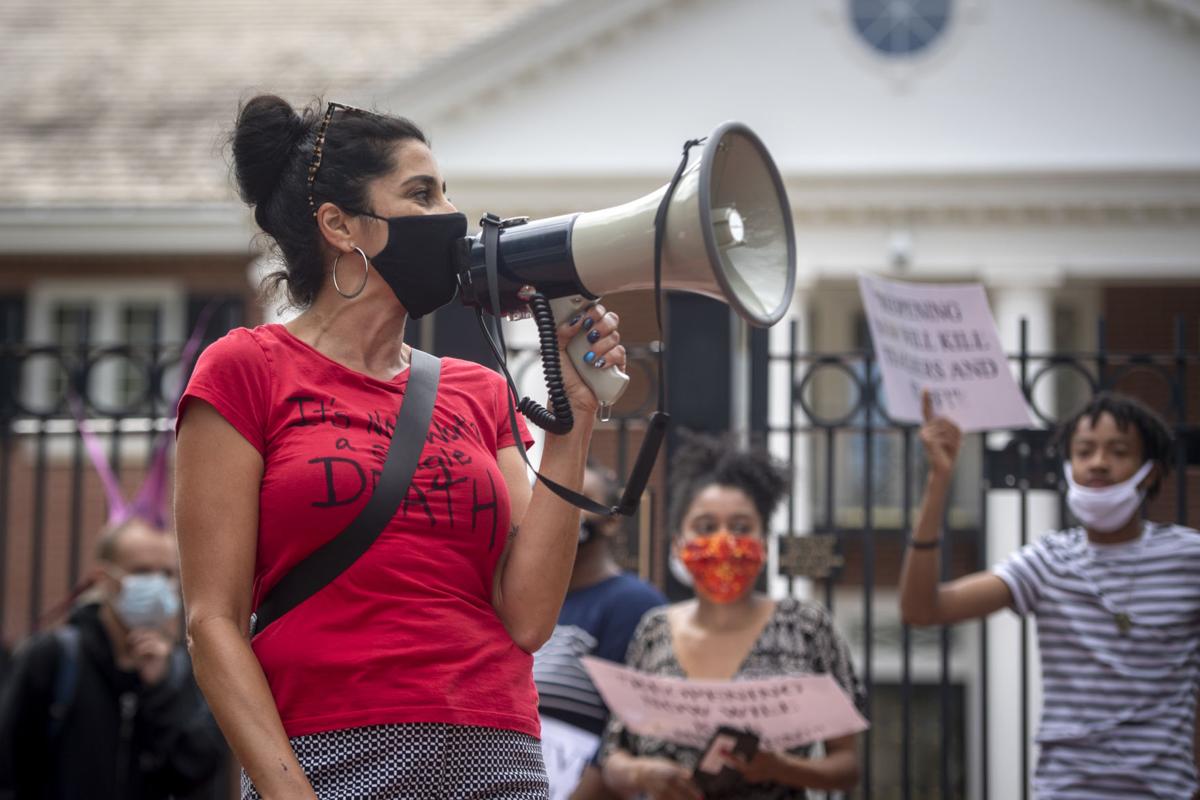 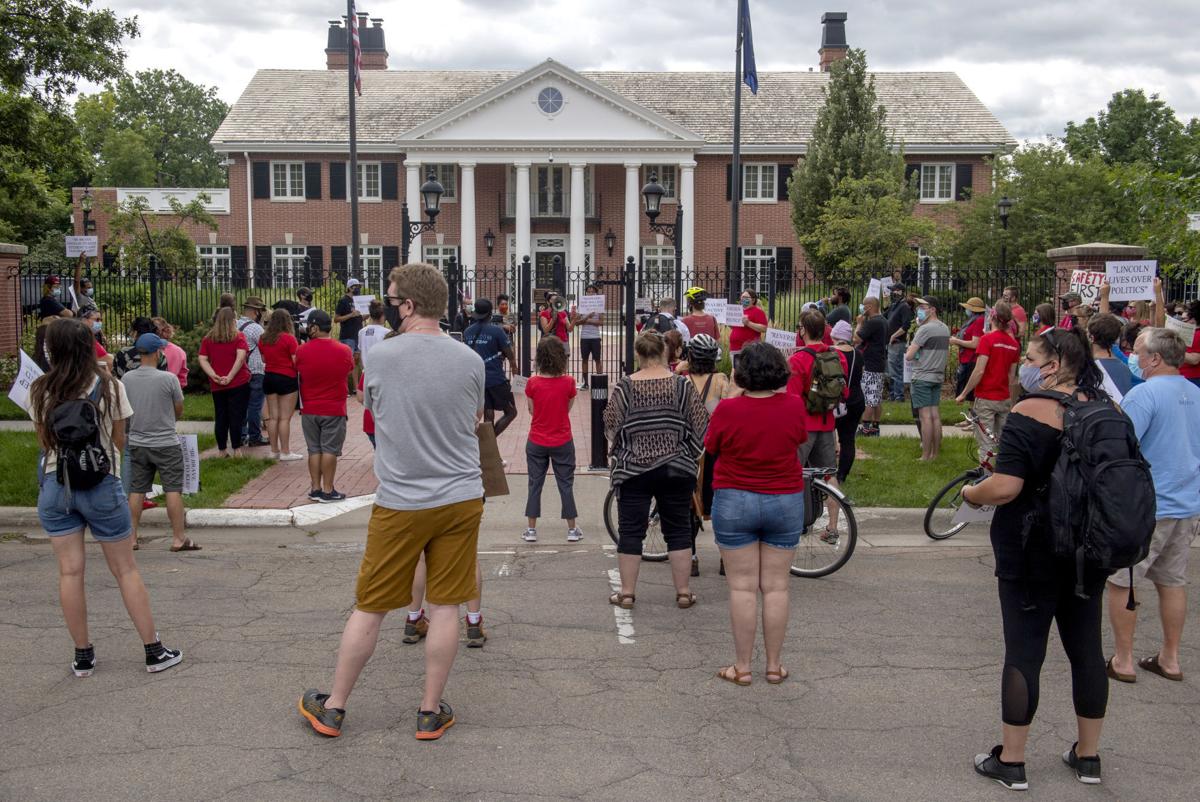 Protesters calling for more safety protocols before reopening Lincoln Public Schools gather in front of the Governor's Mansion on Monday. 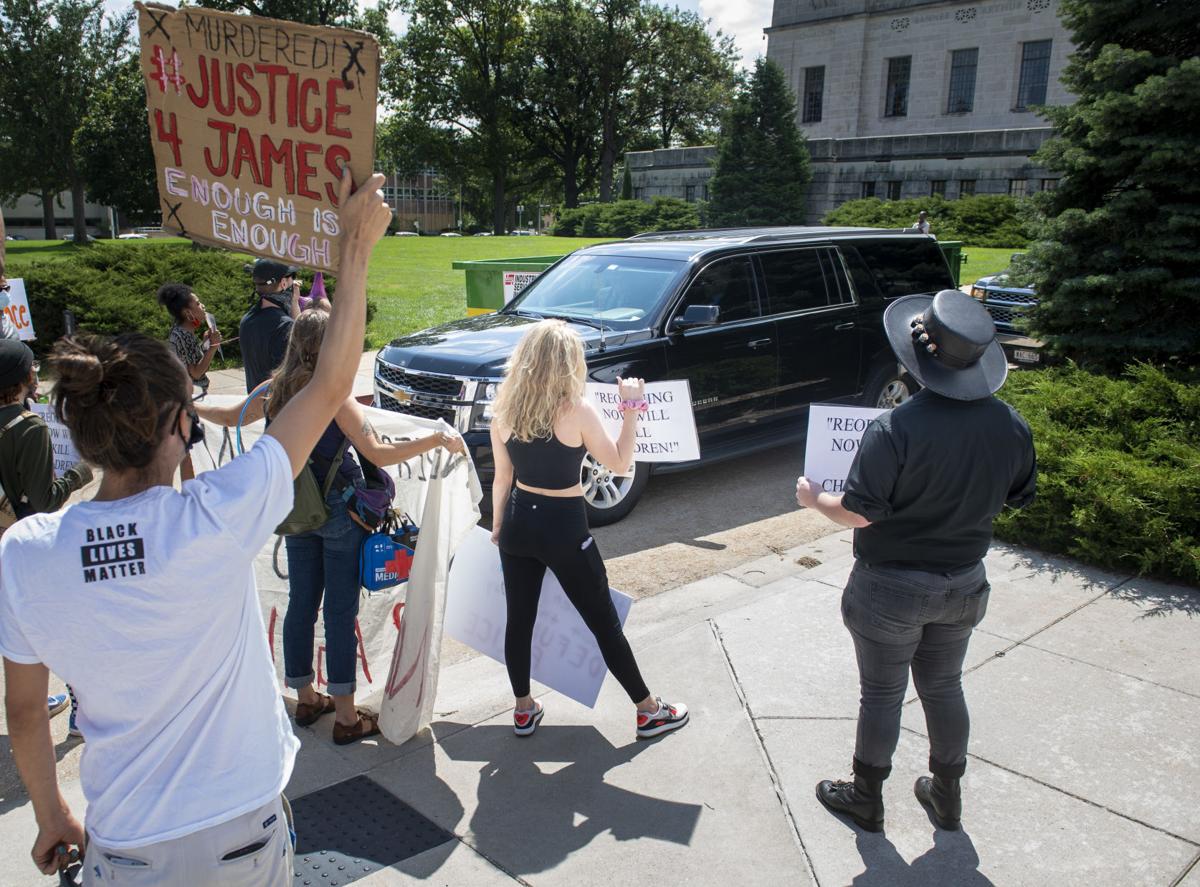 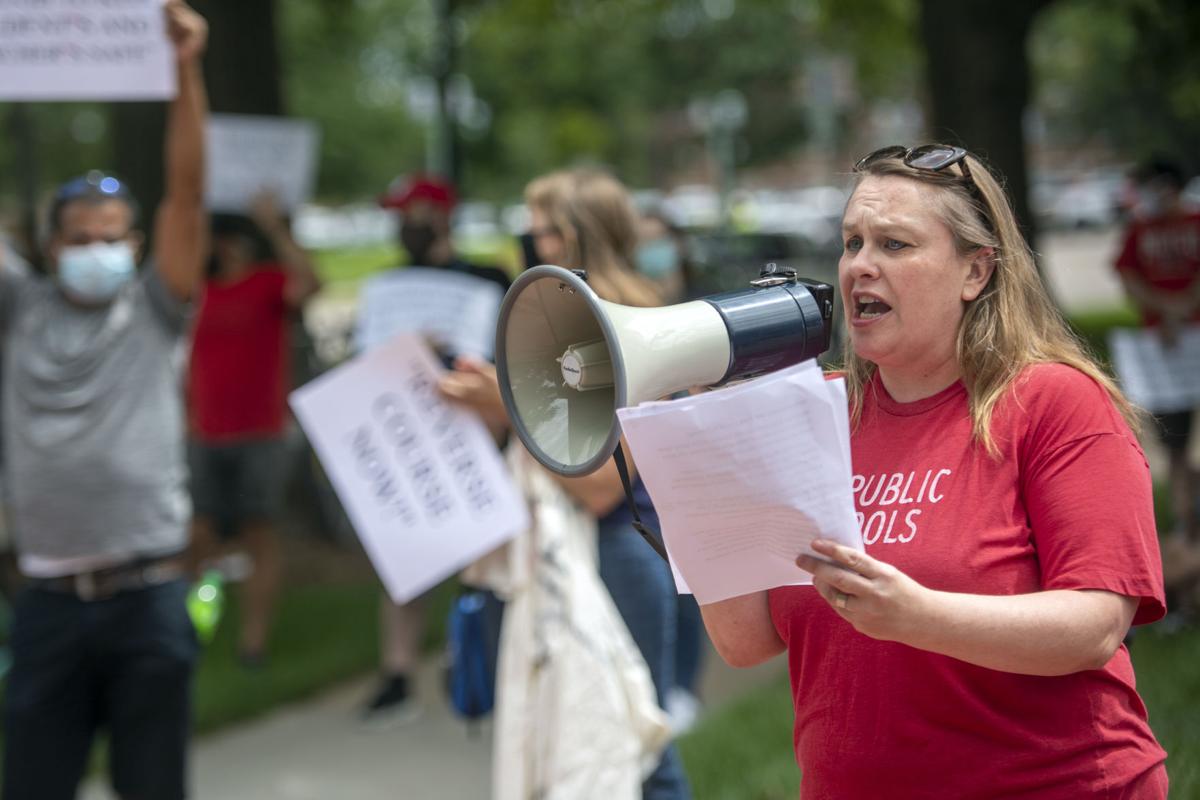 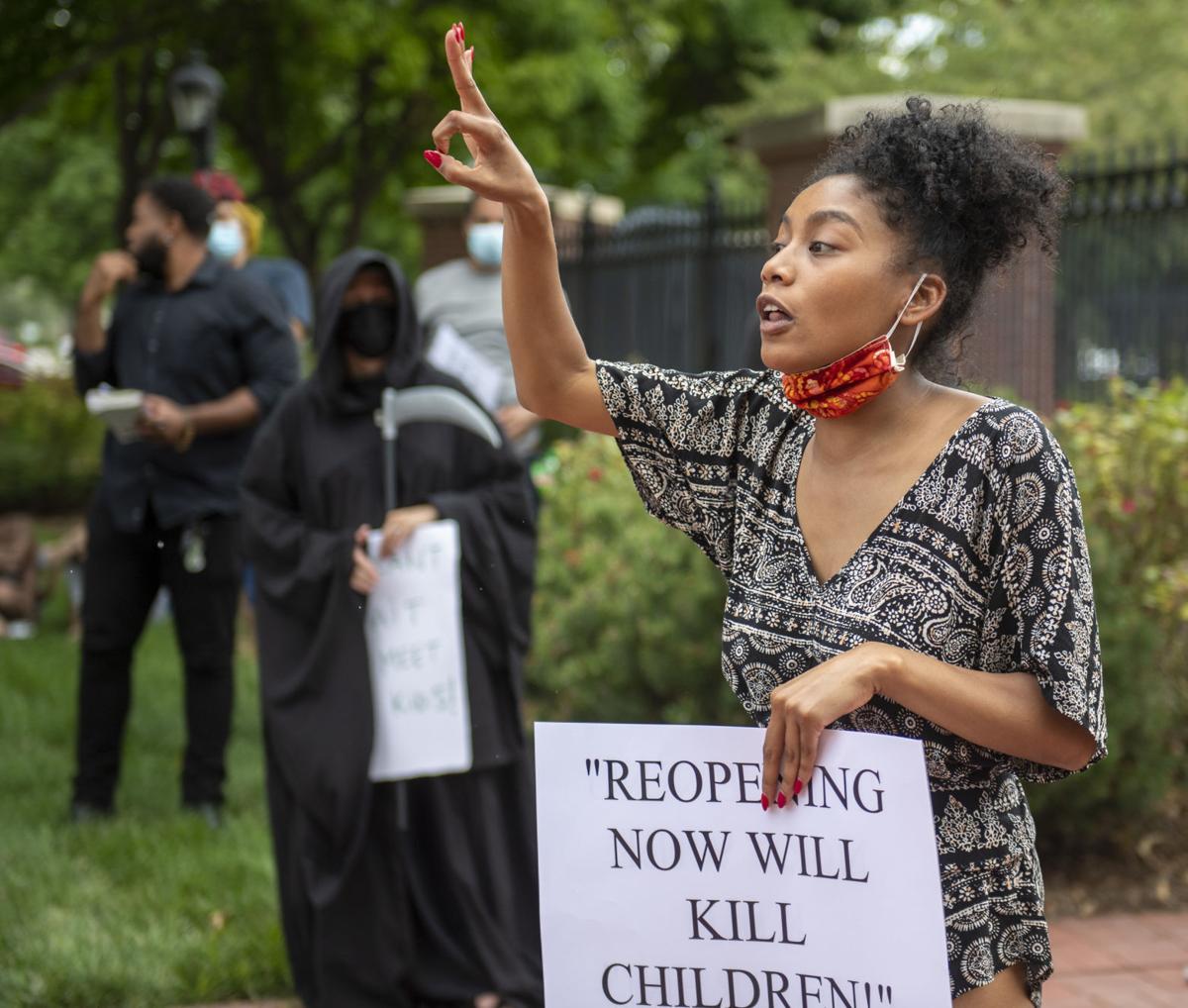 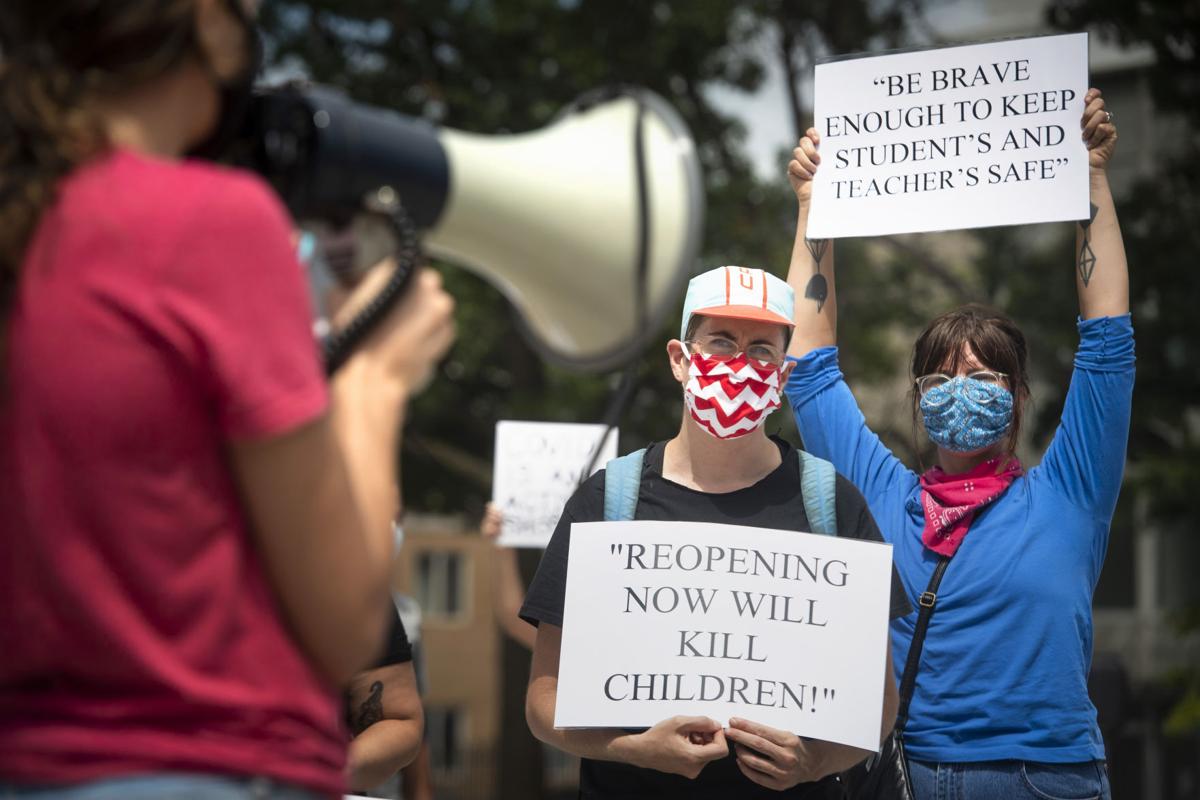 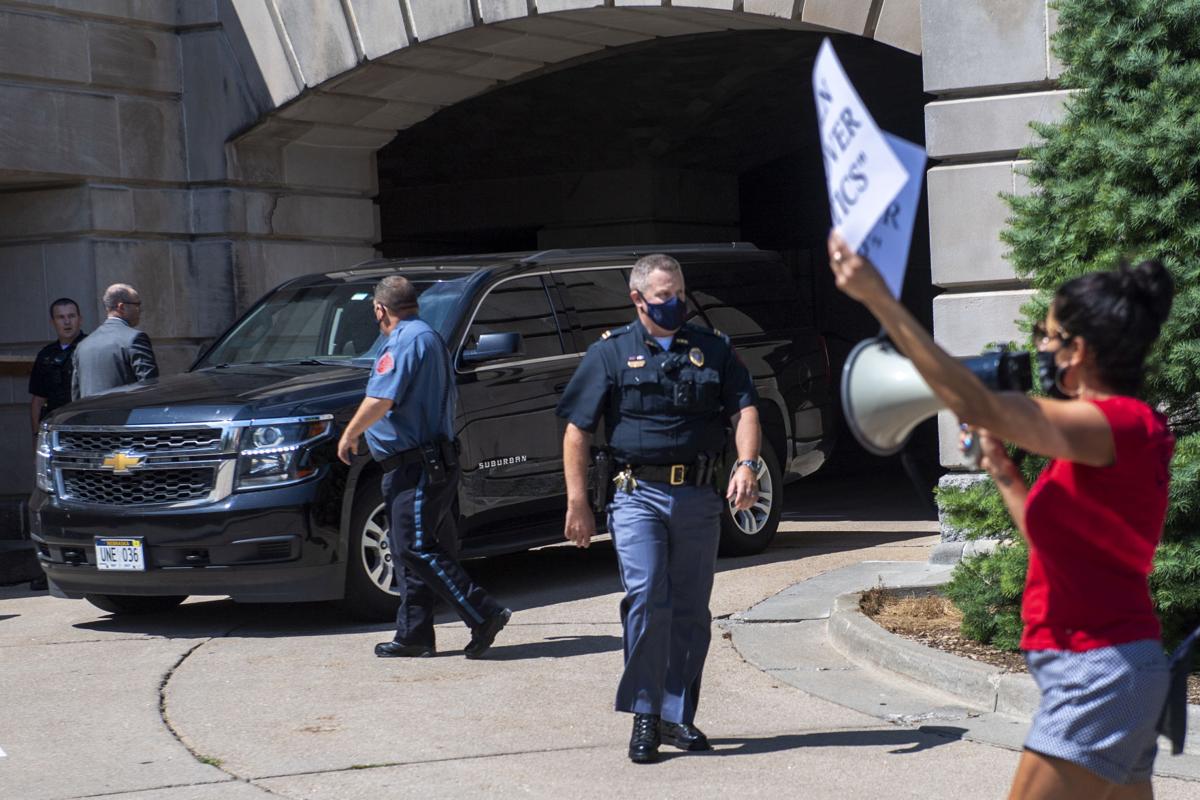 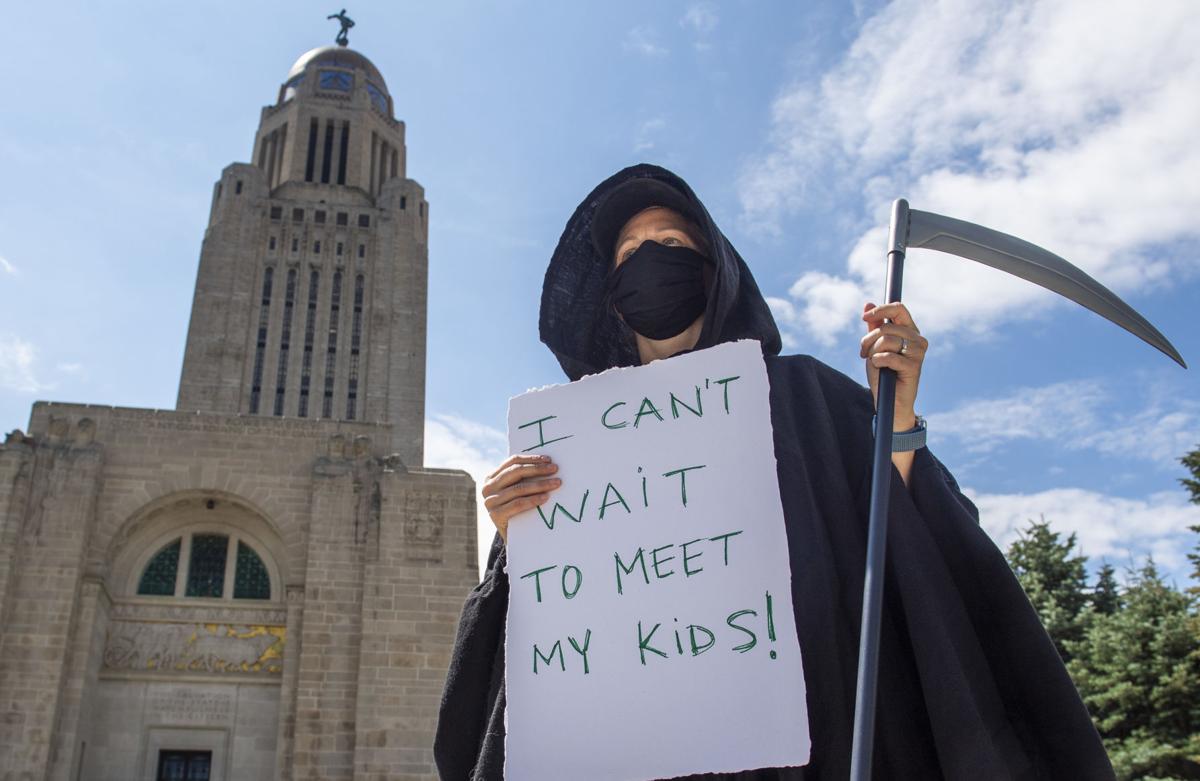 Parent and Lincoln Public Schools teacher Ellen James (center), dressed as the Grim Reaper, holds a sign in front of the state Capitol on Monday, Aug. 3, as protesters called for more safety protocols before reopening schools.

Protesters briefly blocked Gov. Pete Ricketts’ car as it left the state Capitol on Monday, then set up a "classroom" on the Capitol steps to illustrate the challenges of socially distancing in schools when they reopen.

In classrooms — like the imaginary one with 25 protesters crowding inside yellow tape on the Capitol steps — teachers will be expected to balance in-person and remote instruction, regular sanitizing, making sure students keep their masks on and monitoring students for symptoms, protesters said.

And then, students will take off their masks in crowded cafeterias and when they are at recess — where keeping them socially distant will be impossible — all of which makes the Lincoln Public Schools' reopening plan unsafe, said JuJu Tyner, a West Lincoln Elementary School art teacher.

“We will demonstrate to delay reopening until there is an actual safe and equitable reopening plan,” Tyner said.

The protest was organized by a group of more than 1,000 LPS staff and parents called Safely Open Schools, who argue that until positive cases go down significantly in Lincoln, LPS should stick to remote learning — which will be more effective if teachers don’t have to teach both in person and remotely simultaneously.

Reopening schools in Lincoln: Balancing educational harm of staying closed with risk of the virus

Organizers said they decided to protest at the Capitol and in front of the Governor’s Mansion because LPS officials seem intimidated by Ricketts, who is ultimately responsible.

At Memorial Park in Omaha on Monday, more than 200 educators held a demonstration for similar reasons — and to advocate for a mask mandate. Lincoln has a mask mandate; Douglas County was going to order one, but backed off after the state attorney general challenged the plan. However, the Omaha City Council is considering a mandate.

The Omaha educators also argue metro school districts should not open until there is significantly less community spread of the virus.

At a news conference Monday morning, Ricketts said reopening schools is important for the overall well-being of students, including their social, nutritional and behavioral needs, in addition to their academic needs. And he said policymakers need to look at issues broader than doctors do in making their reopening recommendations.

Two hours later, before the start of the Lincoln protest, a car with Ricketts inside pulled out of a driveway just east of the Capitol steps and a few protesters surrounded it, yelling at the occupants.

About 100 people attended the protest, including one teacher dressed as the Grim Reaper who held a sign saying “I can’t wait to meet my kids!”

They argued that LPS’ plan to reopen schools doesn’t follow Centers for Disease Control and Prevention guidelines; will put the community, students, parents and staff at risk; and will exacerbate educational inequities, especially because the virus affects people of color at higher rates.

Michelle Clifford, a Lincoln High School art teacher, said this is the time to right a system that relies on schools to provide things other government systems should provide, such as nutrition, universal child care, mental health and health care services.

“Now is the time to enact changes we’ve been too afraid to make,” she said.

The group marched from the steps on the north side of the Capitol to the Governor’s Mansion on the south side, chanting “safely open schools” and “equity in education.”

“Public schools should not be the economic engine of the recovery,” she said.

Watch Now: How will Biden’s Environmental Protection Agency be different?

Watch Now: How will Biden’s Environmental Protection Agency be different?

Everyone must wear masks while on buses to cornfields and between fields. Masks also are required when small groups gather while waiting for the last tassel pullers to exit cornfield rows.

County health officials won’t know whether Derryk Ramirez-Lopez’s death can be attributed to COVID-19 until a death certificate indicating the cause of death is filed.

Thirty-five percent of center-based owners said they’d lost more than half their income, as did 21% of home-based providers. And nearly 83% of all providers who responded to the survey experienced some loss of income.

In a closed third-floor courtroom with dozens watching online, the Lincoln City Attorney's Office laid out its case Wednesday for why a judge should order the closure of Madsen's Bowling and Billiards for violating directed health measures.

Over half of teachers surveyed by the NSEA prefer starting school remotely; nearly a third said the pandemic has led them to consider retiring or leaving the profession earlier than planned.

School was supposed to start on Tuesday. Pushing the start of school back by a week will allow teachers time to plan, and district in-service will be offered to teachers.

Now, the family’s second daughter, Anna, is preparing to begin kindergarten in the middle of the COVID-19 pandemic.

“I think overwhelming is a good word,” said Lincoln Education Association President Rita Bennett, especially for teachers who all want to do things well. “It is very, very frustrating. No one wants to drop a ball.”

Parent and Lincoln Public Schools teacher Ellen James (center) as the Grim Reaper leads the march from the state Capitol to the Governor's Mansion on Monday. Protesters were calling for more safety protocols before reopening schools.

Protesters calling for more safety protocols before reopening Lincoln Public Schools gather in front of the Governor's Mansion on Monday.

Parent and Lincoln Public Schools teacher Ellen James (center), dressed as the Grim Reaper, holds a sign in front of the state Capitol on Monday, Aug. 3, as protesters called for more safety protocols before reopening schools.