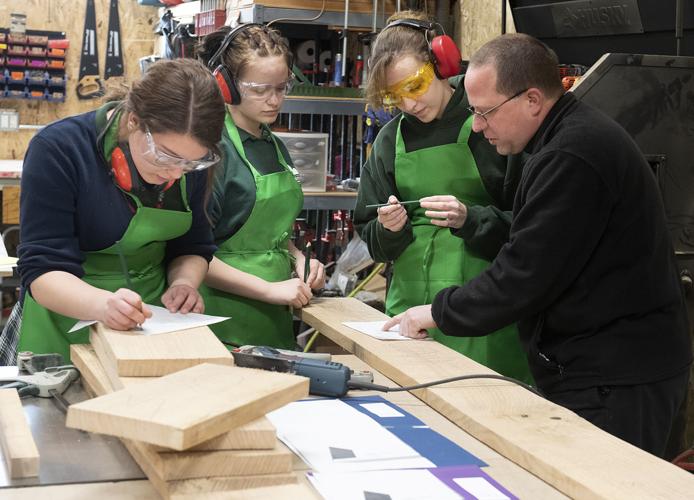 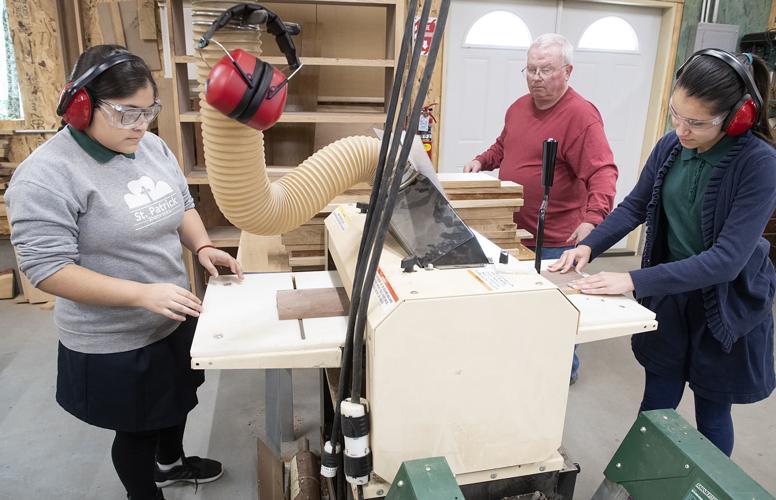 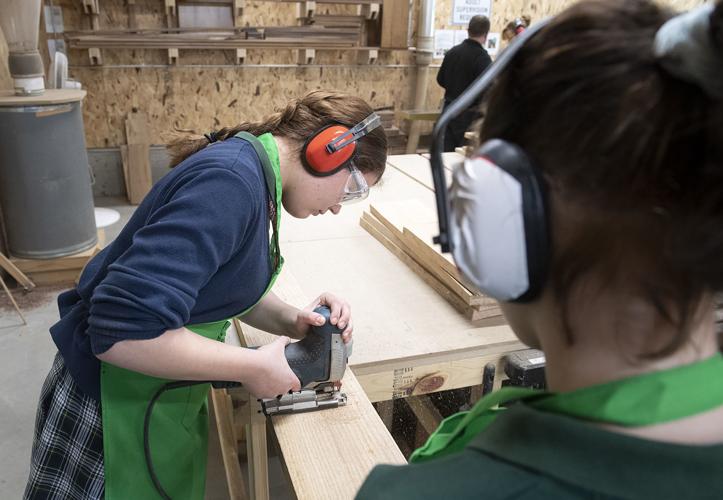 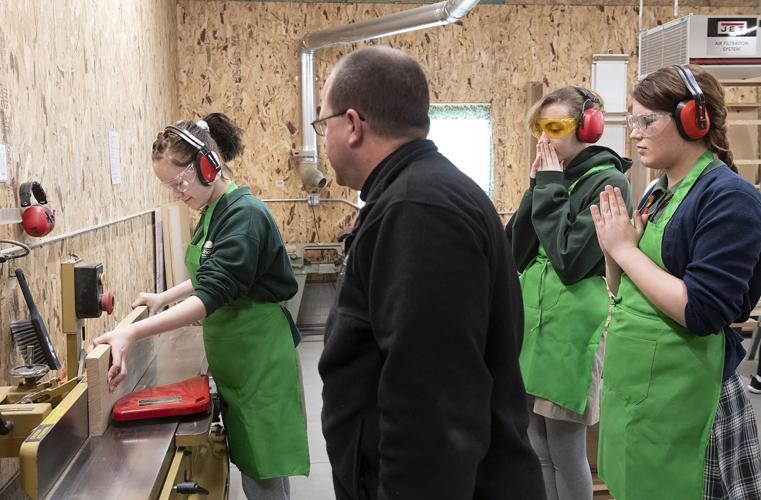 Eighth grader Cecilia Lee (left) runs a board for her project, a desk, through the jointer as the Rev. Troy Schweiger supervises and classmates Piper Bryce and Izzy Hobelman watch during St. Patrick's Catholic School's woodworking club on Monday. 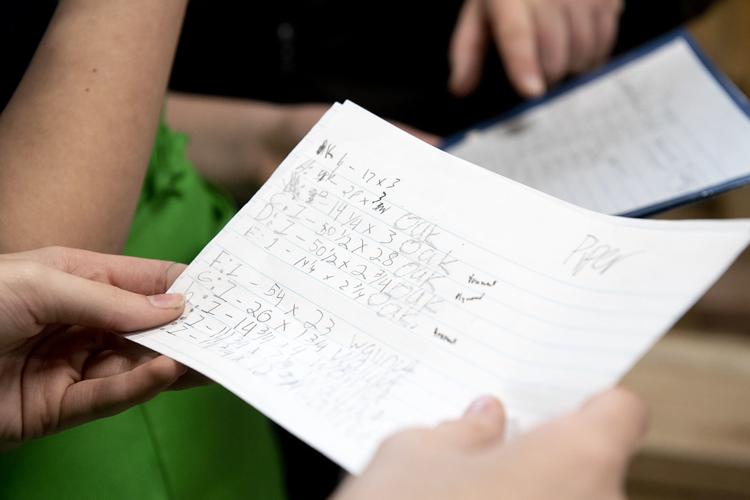 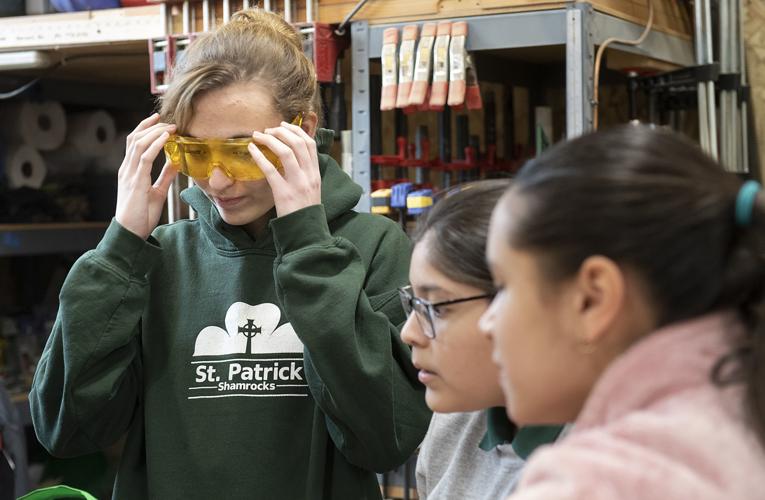 Call it the continuation of a mission, a labor of love that began nearly eight years ago when the Rev. Troy Schweiger stood before a giant oak holding a chainsaw.

He felled that oak and many others with the help of the St. Patrick’s congregation. The volunteers milled 35,000 board feet, cured them and shaped them and turned them into the culmination of their priest's mission: rows of pews for the new church that replaced the one that had stood in Havelock for a century.

The unused lumber sat for some years in a building less than a block from the church and school, some of it used for more church projects, but most of it the object of Schweiger's new plan, a way to continue the outreach he’d begun, a way to share the love of woodworking he’d learned as a kid.

“I always dreamed of having a woodworking club for junior high kids,” he said.

And so, beginning in January, a group of seventh- and eighth-graders — whose feet dangled from those pews when they were new — started walking less than a block from the school each week to a building full of lumber and jointers and planers and jigsaws, donning protective eye gear and getting to work.

They’d likely call their work less a continuation of a mission and more the beginnings of something new — a desk or night stand or jewelry box.

“It seems like a neat life skill, to say ‘I built this,’” said Piper Bryce, one of three eighth grade girls who signed up.

They, along with two seventh graders, make up the girls club, which meets every Monday. Eight boys meet Tuesdays.

Out with the old at St. Patrick

Schweiger said he decided to have both girls’ and boys’ clubs for a couple of reasons. One was pragmatic: They meet during chorus time at the end of the day and there are two choruses, one for boys and one for girls, so the groups switch off singing and sawing.

The other was an effort to empower the girls, to help erase what he sees as a cultural bias against women and woodworking and let the girls thrive without worrying about what their male peers might say or think.

Because Schweiger agrees with Piper, that working with your hands is a great life skill, an invaluable lesson in problem-solving and sticking with a project from beginning to end.

“Taking on a woodworking project gives students the confidence to take it from beginning to end, to solve problems to completion,” he said.

Mike Long, a now-retired machinist with the University of Nebraska’s College of Engineering who helped build the pews and now helps Schweiger with the student woodworking club, said he had the same goal when he taught a machinist class to university students.

Same idea: to get their heads out of textbooks and to work out real problems in front of them.

“That’s what we’re asking student to do, step outside the box,” he said.

Each student picked his or her own project, found an existing plan and modified it as necessary. They passed safety tests before working with the equipment. Then they started measuring and cutting and smoothing.

Schweiger has loved seeing students take that first, hesitant cut with a saw or other woodworking tool and watching their confidence grow as the process unfolds.

“To me, that is not being afraid to solve a problem,” he said. “That can be applied to any part of our lives.”

Jeff McCabe is hanging up his table saw at East High after four decades.

Five outstanding Lincoln Public Schools teachers will be honored today after being selected from 500 entries.

For Olivia Kittelson and Brynley Thiltgen, how Orbeez grow in water caught their curiosity.

The new principals at St. Michael School and Blessed Sacrament will begin their new duties this summer.

Eighth grader Cecilia Lee (left) runs a board for her project, a desk, through the jointer as the Rev. Troy Schweiger supervises and classmates Piper Bryce and Izzy Hobelman watch during St. Patrick's Catholic School's woodworking club on Monday.