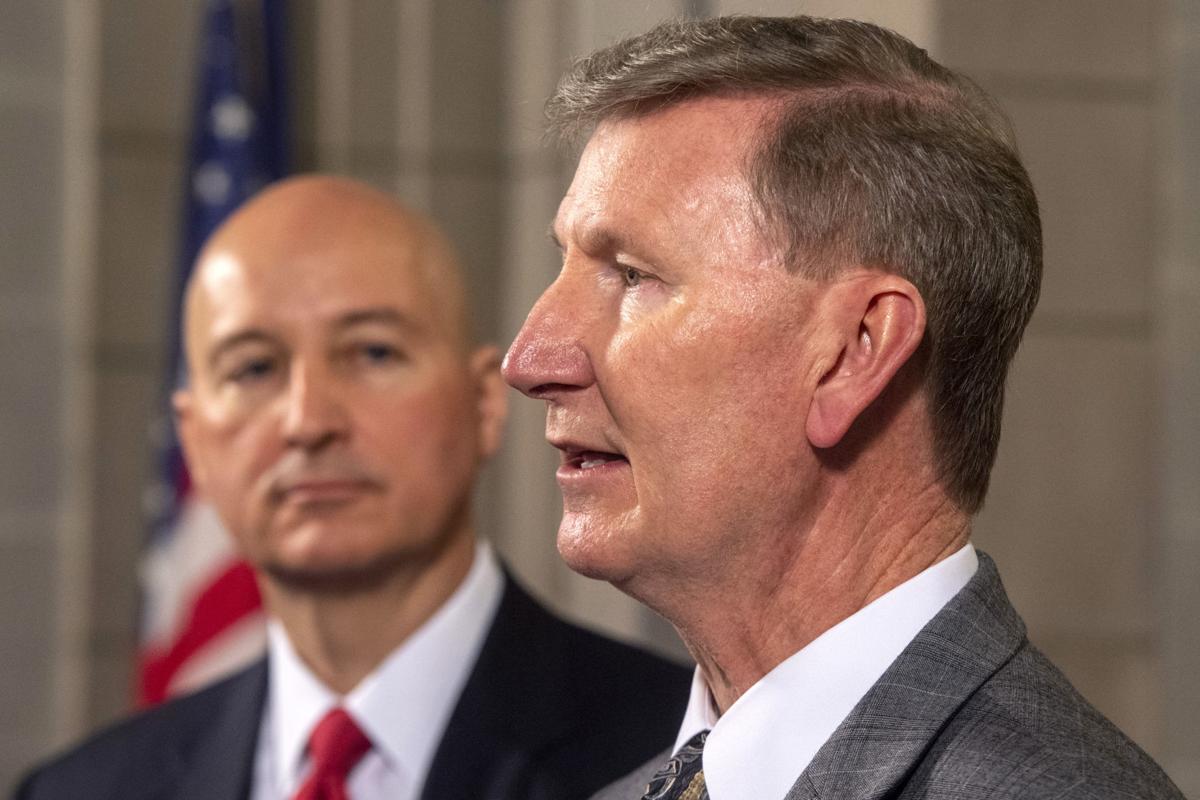 University of Nebraska President Ted Carter speaks next to Gov. Pete Ricketts last month during a news conference on coronavirus Friday at the state Capitol. Carter announced plans to reopen the NU system by the fall on Friday. The University of Nebraska intends to hold in-person classes on all of its campuses in the fall, NU President Ted Carter said Friday.

In a message sent out to faculty, staff and students, Carter laid out the plan for the University of Nebraska system to be open in the fall, while taking into consideration the possibility of continued coronavirus restrictions.

The COVID-19 pandemic has forced most colleges and universities nationwide to shift to online classes. The NU system, which has campuses in Lincoln, Omaha and Kearney, made the decision to call off the rest of the spring semester's in-person classes in lieu of remote teaching on March 12. It will continue delivering online courses this summer.

The university system's plan to open classrooms in four months acknowledges the possibility that class sizes may need to be reduced or adjustments may be required to class schedules in order to accommodate social distancing recommendations if they are still in effect.

Carter said he's been in contact with Gov. Pete Ricketts about NU's plans, and they both felt that having students on campus would be safe because more testing is likely to be available in the fall along with expanded contact tracing capabilities in the event that there are cases among students or staff. To date, there have been just a handful of cases in the NU system, Carter said.

He also said NU will rely on a planning checklist being developed by University of Nebraska Medical Center experts that will cover protocols on cleaning, protective face wear, hygiene and facility use.

"We’re confident in recommendations from our UNMC partners, who are in full support of (the plan)," Carter said. "This gives people what they need the most right now, and that’s a sense of predictability."

The NU president said he thought it was important to make an announcement about NU's intentions now so that both perspective and current students have enough time to make informed decisions about their fall plans. Incoming students have until June 1 to decide whether to enroll at the university — a deadline that was moved from May 1 in recent weeks.

Carter said the recent announcement of the Nebraska Promise, an initiative that is expected to pay tuition costs for an estimated 1,000 students whose families' adjusted gross incomes are at or below $60,000, has triggered a boost in enrollment applications. He said he expects Friday's announcement to have a similar impact on enrollment.

"I think young men and women, whether they’re coming out of high school or wondering whether or not they’re going to come back, they want to know that their campus is going to be open," Carter said. "We’ve become very good at doing the online education and that will still be a process that’s available and that’s a process that we’ll go back to should the situation dictate that. But you get a much different experience by being in residence on the campus. This is a whole-person education."

While on-campus classes have been canceled for now, residence halls for students have remained open. University of Nebraska-Lincoln Chancellor Ronnie Green said Friday that keeping the dorms open has provided good experience on how to create the necessary distancing and safely serve the needs of the students.

"We believe by fall individuals will have greater data on their personal exposure, and there will be the ability to equip our community with the tools needed to provide personal protection," Green said.

A UNL campus COVID-19 task force will be working in the coming months to examine ways to ensure a successful and safe fall semester while meeting the university's education, research and engagement missions, Green said.

Carter said the return of college sports and other extracurricular activities will eventually be folded into NU's plans, but that those guidelines will likely come from other organizations like the NCAA or athletic conferences. But he remained optimistic and signaled that Friday's announcement was a key first step.

"Sports don't have any chance of happening if we don't have students on campus," he said. "We think by the way we’re doing this, and the checklist that we’re going to be putting out, will not only allow us to get back on campus, but others may take a look at what we’re doing and see a path to do the same thing."

And while Carter has dealt with his share of life-or-death situations as a U.S. Navy officer for 38 years before taking over as NU's president in December, he said the COVID-19 challenges have been an eye-opener.

"As much as that may have prepared me for some of the scenarios we’re in, I’ve never seen anything that has as much local, state, national and international impact," he said. "I’m just thankful to be surrounded by such a great team that allows us to be the problem solvers we’ve been."

Administrators across the area are wondering if students will return to the dorms and academic buildings when the transmission of COVID-19 subsides. And, if not, what that could mean for the future of their institutions.

Nader Farahbod, the owner of Billy's Restaurant, says he's happy to have Omaha lead the way forward. "We can see how the curve works, but eventually we all have to come out of this," Farahbod said.

Larry Gossen will be the next dean of the Nebraska College of Technical Agriculture in Curtis.

Each year, approximately 83% of UNL graduates attend their commencement ceremony, one of the highest rates of attendance nationally.

The superintendent said the primary reason to end classes ahead of schedule was to allow for more time to process grades. In a conventional setting, he said, the process doesn’t take as long.

Buildings on campus will now remain closed, except to essential personnel, through May 11. After that date, there will be more flexibility for employees to access offices, labs, studios or research facilities.

UNL graduate looks toward the future of agriculture

Like many other graduating students, Anna Kobza had her college experience cut short by the coronavirus and missed out on what could have been a long-winded goodbye to the place she spent the past four years.

Early enrollment for summer classes this year is up more than 10% over last year.

The more than 10,000 undergraduate and graduate students at the college system's campuses in Peru, Wayne and Chadron will start Aug. 17 and complete finals Wednesday, Nov. 25, the day before Thanksgiving.

The budget also asks for 2% more in state appropriations over the next two years, what NU called a "modest increase" reflective of its efforts to be a good partner to state lawmakers during the crisis.

University of Nebraska President Ted Carter speaks next to Gov. Pete Ricketts last month during a news conference on coronavirus Friday at the state Capitol. Carter announced plans to reopen the NU system by the fall on Friday.