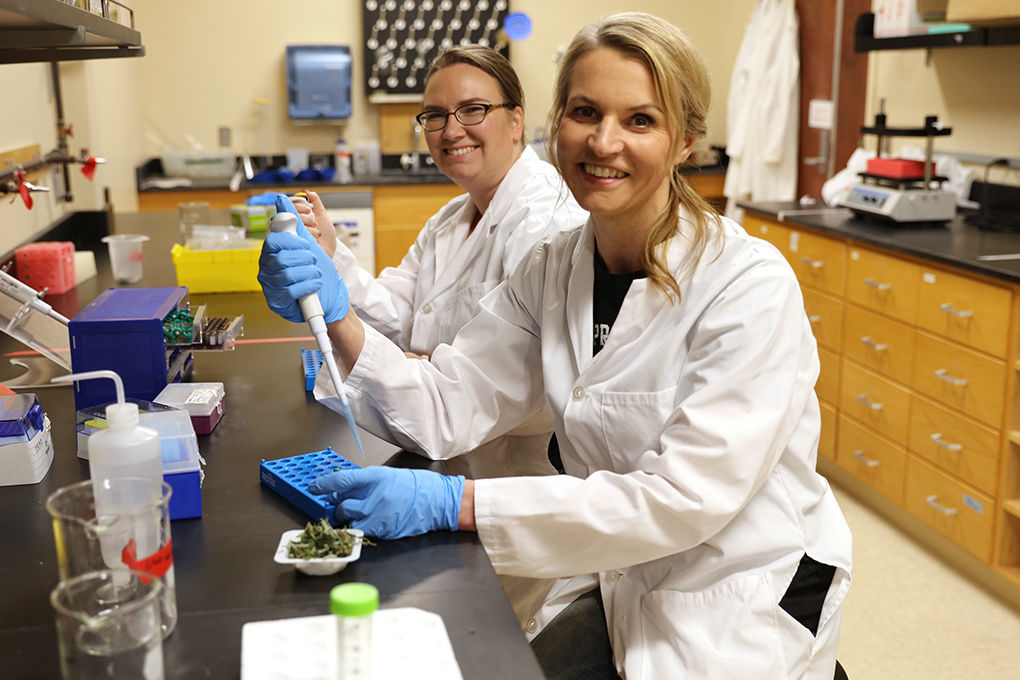 Arin Sutlief (in back) and Andrea Holmes prepare samples for cannabinoid analysis by high-performance liquid chromatography. 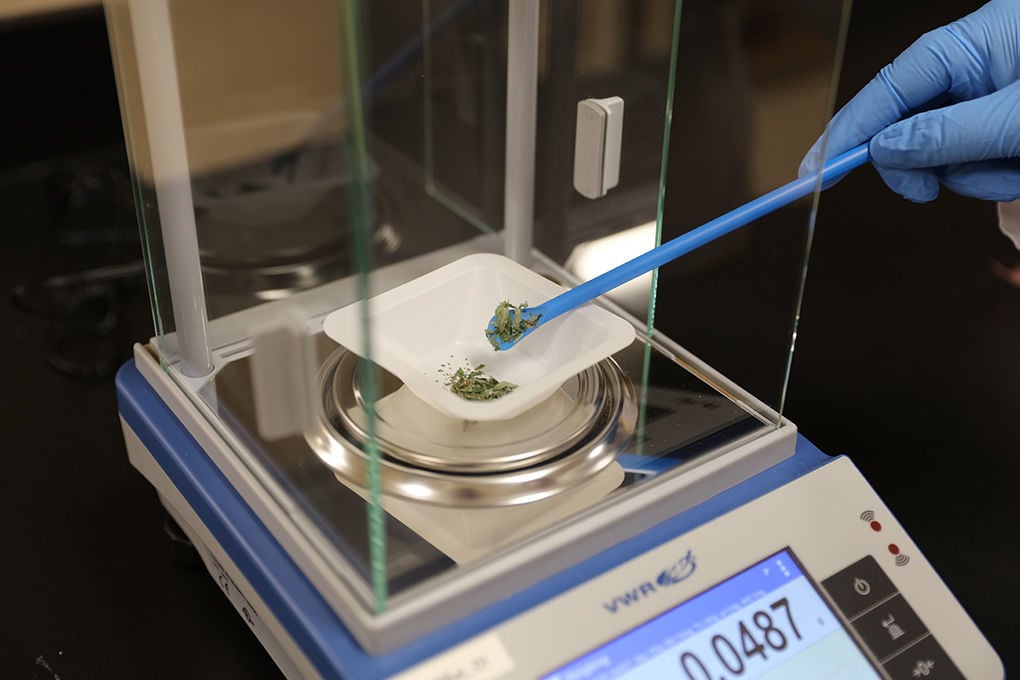 Hemp is weighed for sample preparation for cannabinoid analysis by high-performance liquid chromatography.

Doane University became the premier location for cannabis education in Nebraska after it launched an online certificate program in 2019 that it later expanded into a series of classes for students at its Crete campus.

The designation means farmers, processors, vendors and consumers of hemp and CBD products such as paper and lotions will have local access to "high-quality and reliable testing," said Andrea Holmes, a professor of chemistry and director of cannabis studies at Doane.

In 2019, following the passage of the Farm Bill that legalized hemp as an agricultural commodity, state lawmakers enacted new regulations that include requiring farmers to register their field location and grow plants with less than 0.3% THC, the psychoactive drug in cannabis.

But since the Nebraska Hemp Farming Act went into effect, the approximately 80 farmers in Nebraska approved to grow the new agricultural crop have had to send their samples out of state to labs in Kentucky or Tennessee to be verified.

"For farmers, continuous testing is of utmost importance so they don't grow hemp of 0.3% total THC levels, at which point hemp is categorized as marijuana, which is currently illegal in Nebraska," Holmes said, and requires the crop to be destroyed under state law.

Cannabis Testing Laboratories, which was founded by Holmes, aims to fill a local gap in testing capacity for Nebraska farmers, as well as draw business from hemp producers in bordering states.

While it can take years to receive recognition as an ISO-certified lab, Doane was able to achieve the standard in just a few short weeks, said Arin Sutlief, an analytical chemist and director of laboratories for the company.

Sutlief, originally from Missouri, had assisted Holmes with her research into cannabinoids while she worked as a postdoctoral researcher studying biofilms at Doane until April, when her funding expired.

Holmes hired Sutlief to be lab director on June 8; on June 24, the company went through an audit and virtual site visit of its standard operating procedures, business plan, and quality-control process for Perry Johnson Laboratory Accreditation.

CTL learned on July 8 it received ISO 17025 certification, becoming the first lab in Nebraska with that designation.

Since then, CTL has been testing samples submitted from Nebraska growers, as well as companies in Colorado and Iowa, according to Sutlief.

Under its current instrumental and staffing capacity, CTL could analyze the THC content of hemp and other cannabis-related products for as many as 40,000 samples per year, Sutlief said.

But the company, which will have its own board of directors and management team while still operating under the purview of Doane's Board of Trustees, envisions growing along with Nebraska's hemp industry.

Dr. Amanda McKinney, a member of CTL's management team who will also help teach a class on medical cannabis at Doane this fall, said Nebraska used to be one of the largest hemp-producing states in the country between 1887 and 1914.

"Nebraska can be on a similar trajectory again," McKinney said. "But, in order to do so, hemp farmers in the state need support services, and now we're providing that."

Sutlief said in addition to serving a crucial role in growing the industry here, CTL also wants to tap into and develop another important resource at Doane: Students interested in pursuing careers in cannabis-related fields.

"Because we are closely associated with Doane's program, we can get students into the lab so they are getting hands-on experience," she said. "We want to build an internship program so students have the opportunity to work in the lab over the summer and get that training.

"It could be a very good way to start careers in this industry, particularly as it needs people who have actual experience," Sutlief added.

Hemp proposal submitted by state allows for 270 growers in Nebraska

Still no permit process for hemp in Nebraska, but farmers plant two plots of heirloom hemp

The first industrial hemp crop planted in Nebraska since the 1950s was hand-sown Sunday evening in a field near Giltner.

“The real work is developing plans that we can quickly move between if the situation deteriorates,” UNL professor Greg Simon said.

West Nebraska manufacturer has been creative from the start

Some 60 years after The Egging Company was incorporated, the business no longer produces tractor cabs, but is still running as a supplier of machine parts, primarily for Caterpillar equipment.

Rich Lloyd, a Hastings College graduate and former member of administration, will take over as executive president at the college on Sept. 1, while retaining his job at Bryan.

"I conclude that the amendment is legally sufficient and I shall not withhold it from the ballot unless otherwise ordered by a court of competent jurisdiction," Secretary of State Bob Evnen said.

Arin Sutlief (in back) and Andrea Holmes prepare samples for cannabinoid analysis by high-performance liquid chromatography.

Hemp is weighed for sample preparation for cannabinoid analysis by high-performance liquid chromatography.