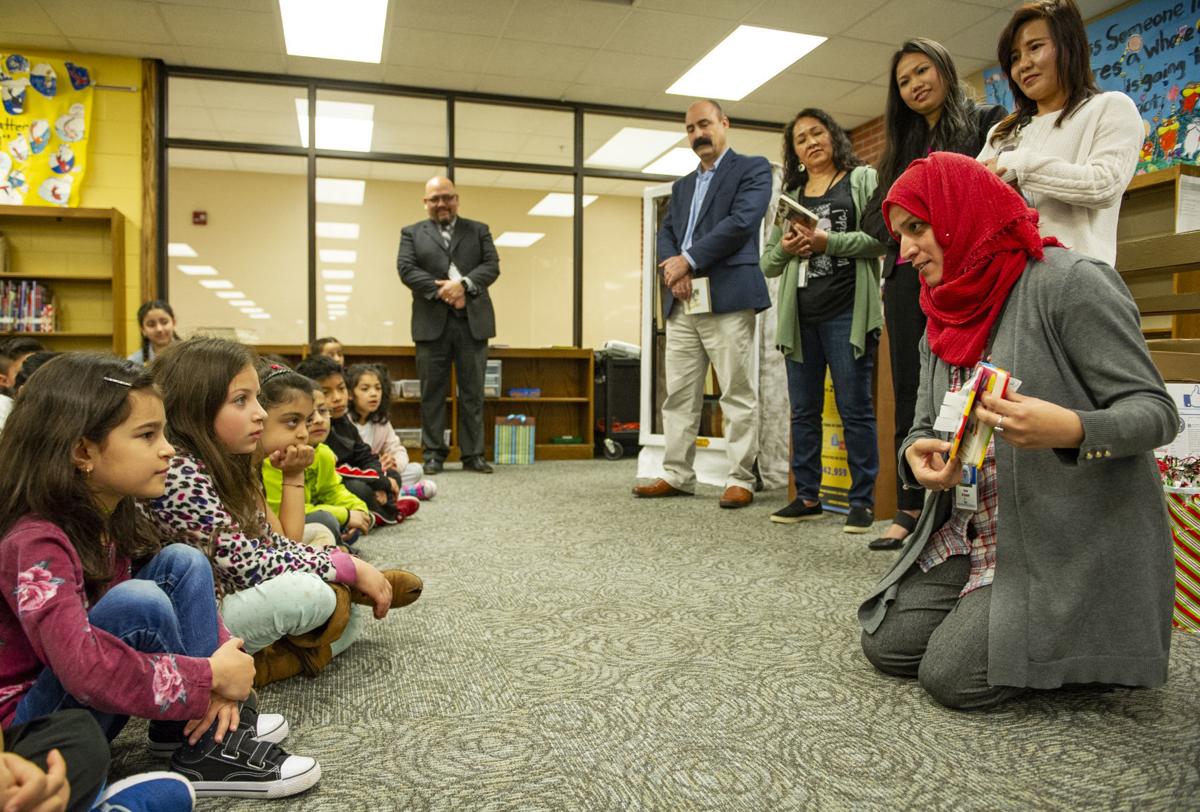 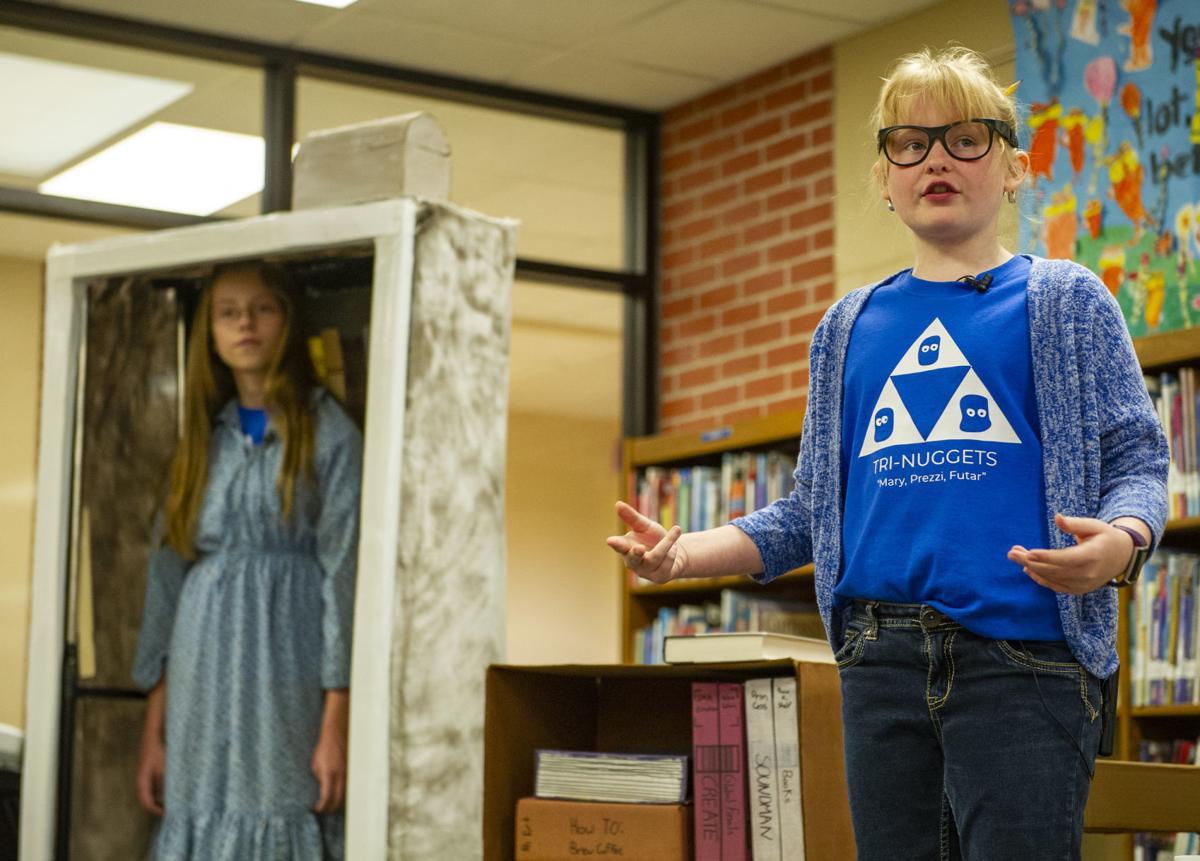 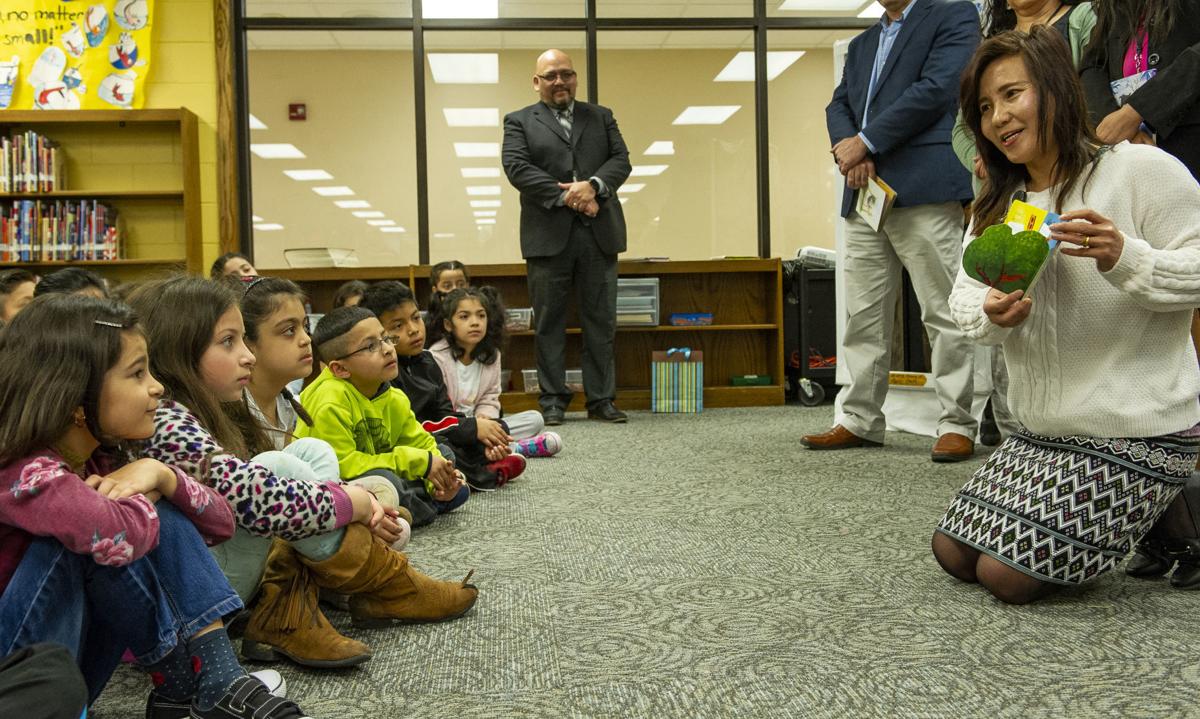 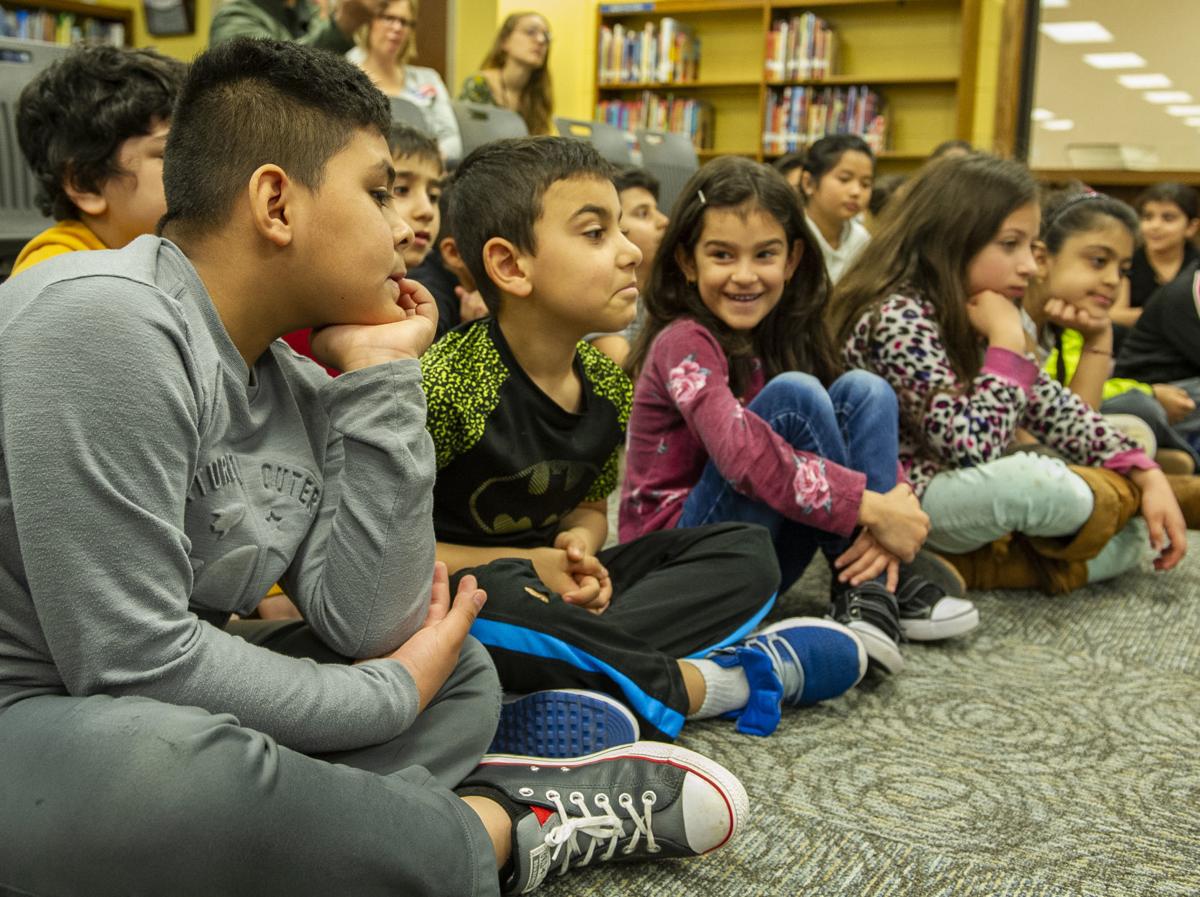 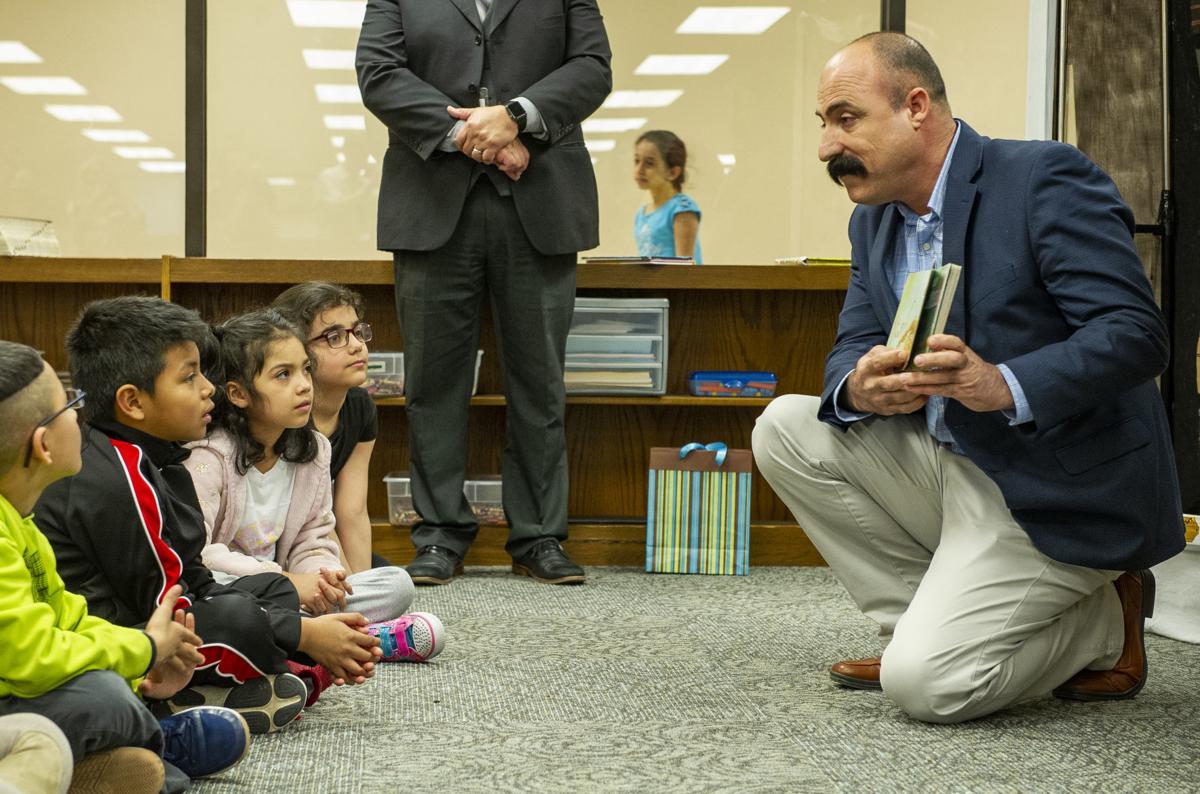 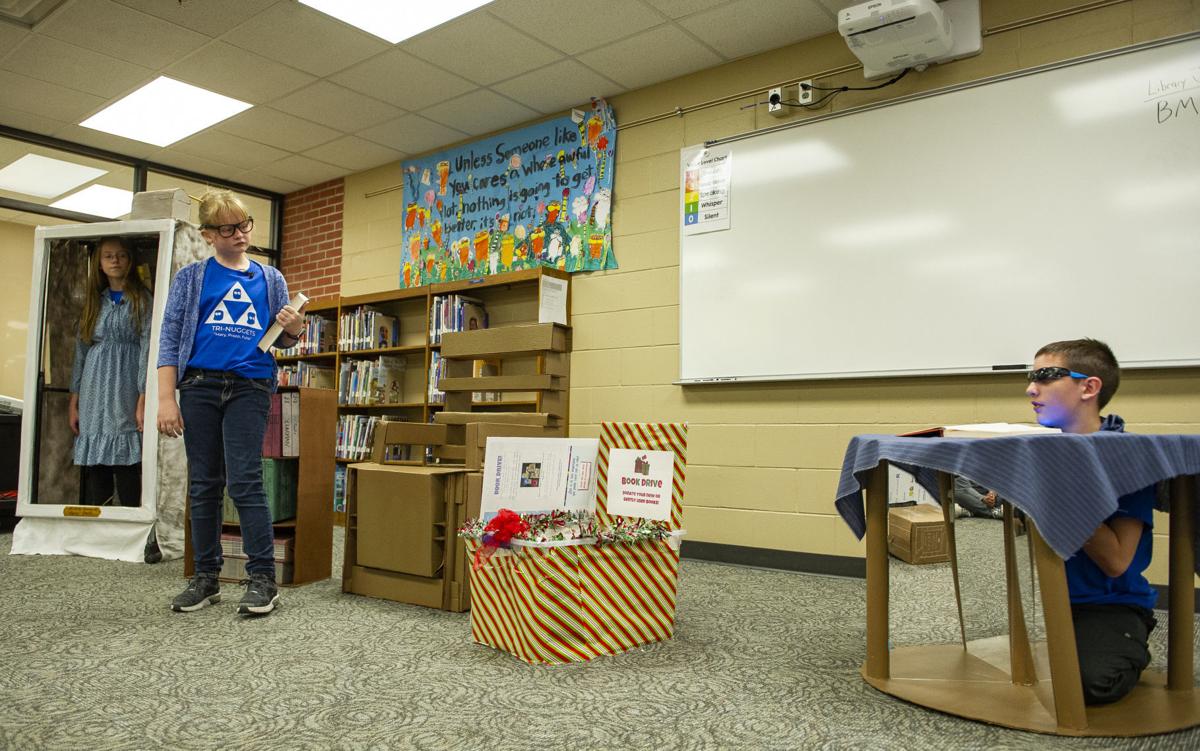 The Friday morning event in the West Lincoln Elementary School library started with this: Lily Ardinger Stibal, Matthew Killham and Darian Kauk like to read.

Early in the school year, the Moore Middle School students began with that premise and brainstormed.

The three remaining members of a Destination Imagination group that began when the three were first and second graders at Kloefkorn Elementary had decided to do a service-learning project for the club, part of a nonprofit organization created to inspire students to become the next generation of innovators through state and global competitions.

“We were thinking about what to do,” said Darian, a seventh grader. “We all like to read, so we thought ‘Why don’t we do something with reading?”

They figured if they liked to read, so did other kids, including those still learning English.

But if your native language is Kurdish or Karen or Spanish or Vietnamese or one of the other 50 languages spoken by Lincoln Public Schools students, it's tough for parents to read books from the school libraries with their kids.

And so, with a little help from the folks from the community reading initiative Reading Aloud, a project was born: Translate children’s books for young English language learners.

The three students started with a book drive, putting collection boxes at the school and the Copple Family YMCA with which it shares space.

They figured maybe they’d get 100 books.

Darian and her sixth grade partners Lily and Matthew sorted through more than 800 donated books and landed on about 100 they thought could be easily translated.

Then they learned copyright laws prohibited them from translating books into languages already translated and sold by the publisher.

So they sorted further and came up with 23 books that would be easy for the bilingual liaisons to translate — those with few enough words that the translations could be printed on a label and attached over or near the English words.

They met with Oscar Rios Pohirieth, who coordinates the LPS bilingual liaison program, and he helped find liaisons who spoke the nine most common languages of ELL students in Lincoln who agreed to do the translations.

Friday, they brought the books to West Lincoln Elementary — which has about 180 ELL students.

About 20 of those students — those who speak the least English, including three students who’d arrived from Guatemala and Vietnam within the past month — gathered in the school library along with their parents to meet the brains behind their new books.

As part of the Destination Imagination project, the Moore Middle School students had to write a play explaining their project.

So they performed it for the West Lincoln audience: a fanciful story with three characters: Mary, a librarian from 1908 trapped in a picture frame, Prezzi-zent — a present-day librarian, and Futar, a man from the future with some translation-magic goggles.

Then six bilingual liaisons read some of the books that would remain in the library in languages the students sitting criss-cross-applesauce on the floor understood well.

The rest of the donated books will be distributed to various schools and programs at LPS and to YMCA day cares.

The Moore students figured those books would affect 142,959 children in a year, a pretty good outcome — and one they’ll present (in play form) at the state Destination Imagination competition in Kearney this weekend.

Students competing in the Destination Imagination program can choose their projects from several different STEM categories. The Moore students picked the service-learning category because they can compete — and help others.

In a world where there’s so much one can worry about, this is the sort of thing it’s important to focus on, said Rios Pohirieth, who introduced the students Friday to the West Lincoln students.

“Let’s do this and let’s hope this is not the last time we do this,” he said.

The Lincoln Board of Education on Tuesday approved the 2021-22 school year calendar, one created by a committee that follows several guideline…

Weird Al Yankovic has nothing on DJ Thatch.

If the early work of a superintendent’s task force is any indication, Lincoln Public Schools is likely to ask the community to support buildin…

The Tri-Nuggets are going global.

It took me eight years to get to Scott Middle School’s Make A Difference Fair and in that time, the annual project has raised more than $70,00…

Jeff McCabe is hanging up his table saw at East High after four decades.

Stand In For Lincoln members donated backpacks and notebooks and pencils and pens to students at Lincoln High and Lincoln North Star who recently moved to the city.