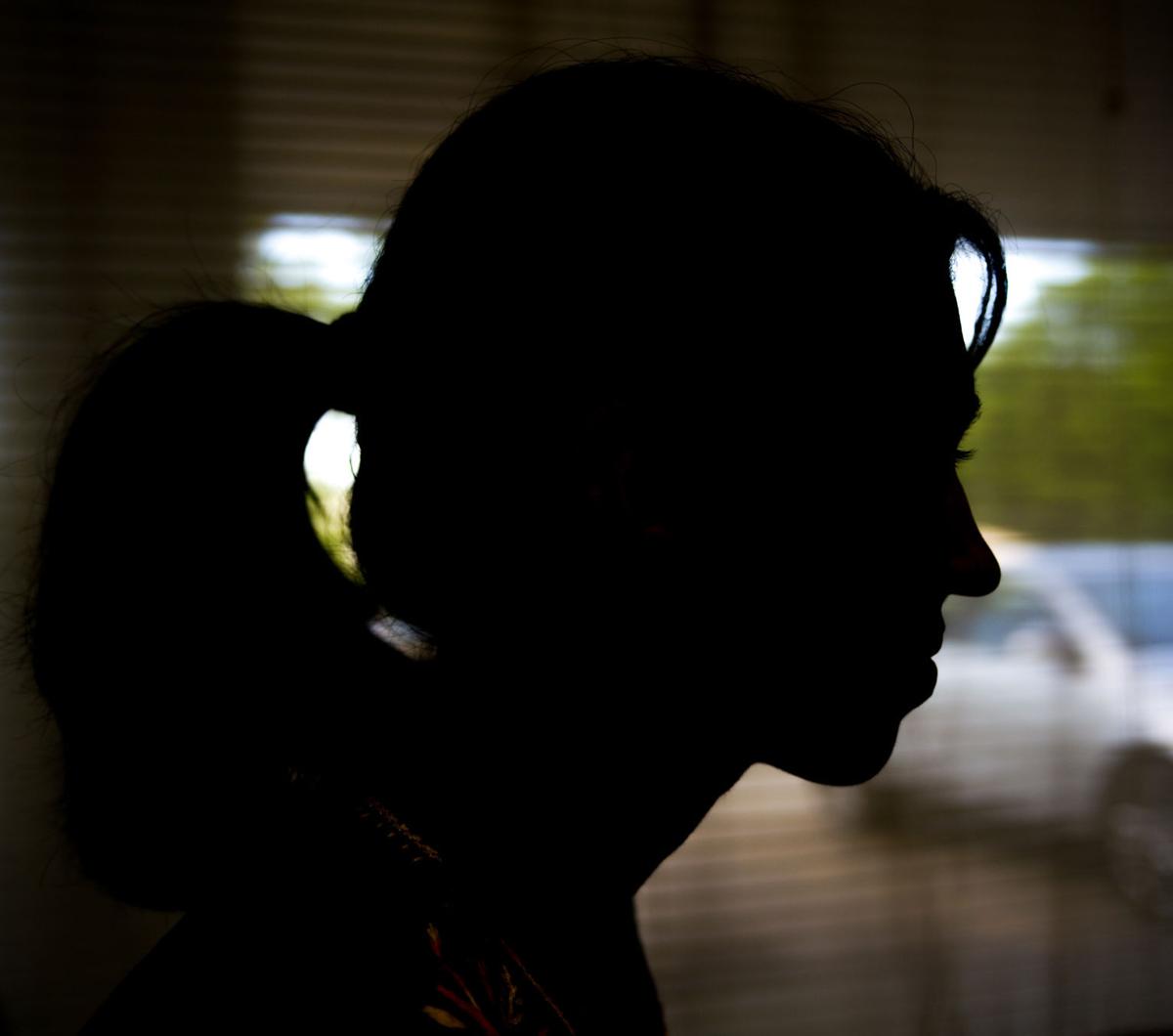 A young woman from Afghanistan — a May graduate of Lincoln North Star — is among the first LPS students to get help dealing with the effects of trauma through a new program that trains therapists and interpreters to work with refugees. 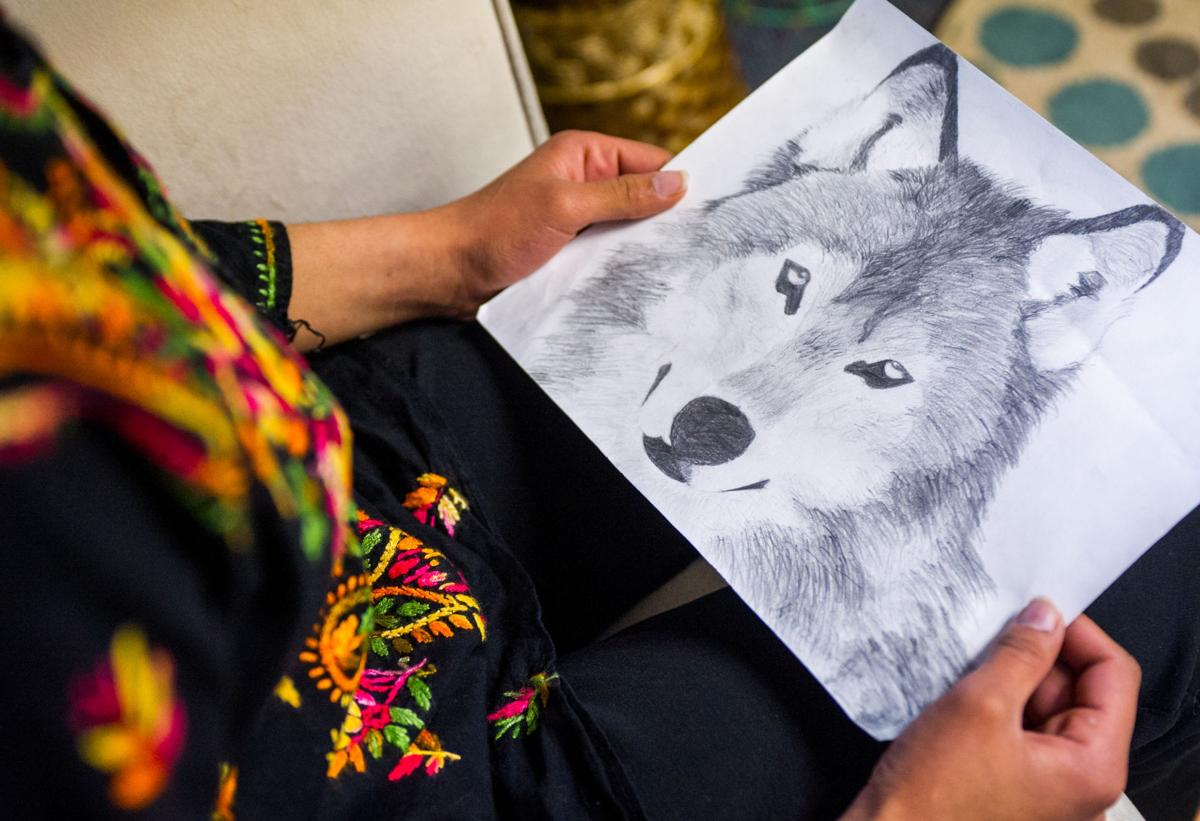 A Lincoln North Star student from Afghanistan holds a drawing she made, one of the ways she dealt with the effects of trauma since moving with her family to Lincoln.

She could not silence the voices in her head.

They kept the young woman awake at night, thoughts tumbling over one another until she cut herself, a relief that didn’t last.

She and her family had fled Afghanistan months earlier — a place she loved, a large home in Kandahar with olive trees and grapevines and flowers her mother loved to plant.

The violence drove her and her family out, stole two brothers from them and sent them across the ocean to a new home in the middle of America.

But the death and loss stayed with her, memories that followed her to Lincoln North Star High School, conjured voices that kept her up at night.

Eventually, the student confided in the teacher she’d come to trust in her English-language learner class.

“I told her I cannot talk to my family, so she hugged me and I was crying and she said was it OK if she talked to a counselor?”

The young woman, who asked that her name not be used for this story, didn’t understand what her teacher had asked, so she said yes.

She was angry then, upset that her teacher had shared a confidence.

Because that encounter led her to Dr. Megan, a psychologist who’s spent much of the past decade helping immigrants like the young Afghani woman find ways to deal with traumatic memories and navigate a new world.

Over the next two years she learned to sleep, to focus on the present, to study and pass her classes and follow a path that led to high school graduation, two scholarships and a way forward.

“Now I think I was wrong,” she said. “They just wanted to help me.”

She's right: The North Star student was among the first served through a new program to help Lincoln Public Schools refugees deal with the trauma that forced them to flee their countries.

In 2014 — the same year the young woman and her family arrived from Afghanistan — members of Lincoln’s large Yazidi community were reeling from the massacre of their people in Sinjar, Iraq.

The IS attacks against Yazidi family members and friends unfolded on television in widespread news coverage.

It was devastating to Yazidi families, but also triggered fear in the city's larger resettlement community. And it convinced LPS officials they needed to do something.

“That’s when the conversation really started to turn to ‘How can we help, how can we support students and families who have relatives living in this horrible situation?'” said Oscar Rios Pohirieth, cultural specialist and coordinator for the LPS bilingual liaison program. “Everyone is affected by it, no matter where they come from. Whether immigrant or refugee, they will be affected by trauma one way or another.”

Immigrant and refugee students at LPS increased 52 percent over the past three school years, from 1,606 to 2,445. Nearly two-thirds of those students came to Lincoln as refugees who fled war or persecution.

An opportunity presented itself in 2014-15 when the district got $162,500 in Title III money for the first time. The federal money is earmarked for immigration education and LPS knew trauma impeded students' ability to learn.

Ultimately the program has been funded by an additional $74,000 in Title III money, some federal Title I funds and grants from Region V Services.

Often, there’s a stigma associated with mental health services, and many people are leery of trusting those in such positions.

Building that trust and rapport is key, as well as instilling hope, said Megan Watson, the psychologist who began working with immigrants and refugees in 2007 as a doctoral student on a grant-funded project to help survivors of torture. "Most have very little hope things can be better for them."

In many cultures, the concept of therapy is foreign and mental health services are defined only by medication or electric shock therapy, she said.

The stigma of mental health is why the Afghani student asked not to be identified.

“When I came here I had a very hard time,” she said in an interview this spring. “When I talk to my family they thought I was crazy. ... Well, I don’t think I’m crazy, so I just told my teacher.”’

Not long before then, LPS had reached out to Watson and two other therapists in the community who had experience dealing with such trauma.

Watson knew the need, that many young people didn’t have insurance to cover therapy or the transportation to get there.

To address the language and cultural barriers, LPS initially turned to 23 bilingual liaisons who work with ELL students.

They knew the families, their many different languages, cultures and beliefs, but lacked the expertise to interpret in mental heath settings. LPS provided that training.

Interpreters are key to working with trauma sufferers, said Watson, and it’s imperative that the same therapist remain with patients each visit.

But translating in therapy sessions while working with families on other school-related issues became problematic and emotionally draining for the bilingual liaisons, said Rios Pohirieth.

LPS then reached out to community interpreters.

Fifteen signed on, recently completed training and will work with an expanded pool of therapists.

Watson and Francisca Peterson, another therapist involved with the project, agreed to train 12 additional therapists from Family Service Lincoln and the Child Guidance Center to work with refugee students, said Brenda Leggiadro, LPS coordinator of counseling and social work.

During the last school year, therapists served 49 students through the program, and another 24 remained on a waiting list, said Anne Caruso, LPS grant specialist. Those students came from 14 different schools, from elementary to high school.

But LPS officials say the issue goes beyond school walls.

“We have come to realize if we do not do something about it (the community) will be hurting in the near future,” said Rios Pohirieth. “We are going to lose our kids to drugs, alcohol, suicide — any coping mechanism they can find on their own, without professional help.”

Slowly, though, students are beginning to reach out, despite the stigma.

“Little by little they are coming forward and saying I want to do this,” he said. “We are seeing this play out in ways we didn't 2½ years ago, and it is a beautiful thing.”

The young Afghan woman, now 20, began drawing when she got to America, detailed pictures of animals and people.

Drawing keeps her mind occupied, focused on now, on the tiny squares into which she divides each picture she begins.

It helps put the violence she grew up with aside, to focus on today.

It's still there, though, still a part of her, the second-youngest of eight children.

A car bomb killed two of her brothers and convinced the family to leave their country.

One brother was an interpreter with the U.S. Army and had his visa to come to America in a matter of days, she said. The other was 2½ years old. Both had gotten into a car to go see their grandmother.

Her mother was a high school principal in Afghanistan. Her father, an engineer, disappeared while on a business trip when she was a young child.

His loss plunged the family into poverty, but education was important and the older girls studied medicine in Afghanistan.

So when they landed in Lincoln, the young woman went to see Dr. Megan, who encouraged her to keep going, to graduate.

She followed Dr. Megan's advice, thought of one thing that made her happy when she crawled into bed. She imagined a house in Dubai, designed and decorated it in her mind, room by room.

And she began to sleep, and study and learn other ways to live with the things she's seen.

She doesn’t think she would have graduated without Dr. Megan's help, would not have gotten a four-year Susan T. Buffett Scholarship to the University of Nebraska-Lincoln and a Learn to Dream Scholarship for Southeast Community College to prepare her for UNL.

She left after graduation for her second visit to Afghanistan, the country she loves.

She knows it is still dangerous, but is focused on what's to come: studying business and becoming a successful businesswoman who can use the money she makes to help others who have struggled.

Life is hard, she said, but there are people like Dr. Megan. And so there is hope.

Billy Le has flirted with the idea of being a chef for a while now.

Put one in the win column for rural Nebraska, thanks to four high school students who make a pretty convincing case for the real-life educatio…

The small, white eagle plume that will be affixed to Elainna Robles’ cap as she walks across the stage to get her high school diploma Sunday s…

Two men were arrested on Saturday night after threatening a teen with an airsoft gun and stealing her car, police said.

Low-income families get gift of support for Father's Day

Nahla Abrahim is looking forward to two celebrations next Sunday — her eighth birthday and Father’s Day.

MALCOLM — At the base of a hill on the edge of a 20-acre field covered by low weeds, 250 people gathered under and around white tents to celeb…

Lincoln Public Schools, which has been fighting a shortage of bus drivers for years, wants to offer new drivers a $500 signing bonus as well a…

The pungent smell of spearmint Lifesavers filled Gabby Danner’s office last week, spilling out into the Lincoln High hallways in the hands of …

Seven years ago at Hartley Elementary, Nevaeh Murphy was a quiet, reserved fourth-grader.

A young woman from Afghanistan — a May graduate of Lincoln North Star — is among the first LPS students to get help dealing with the effects of trauma through a new program that trains therapists and interpreters to work with refugees.

A Lincoln North Star student from Afghanistan holds a drawing she made, one of the ways she dealt with the effects of trauma since moving with her family to Lincoln.