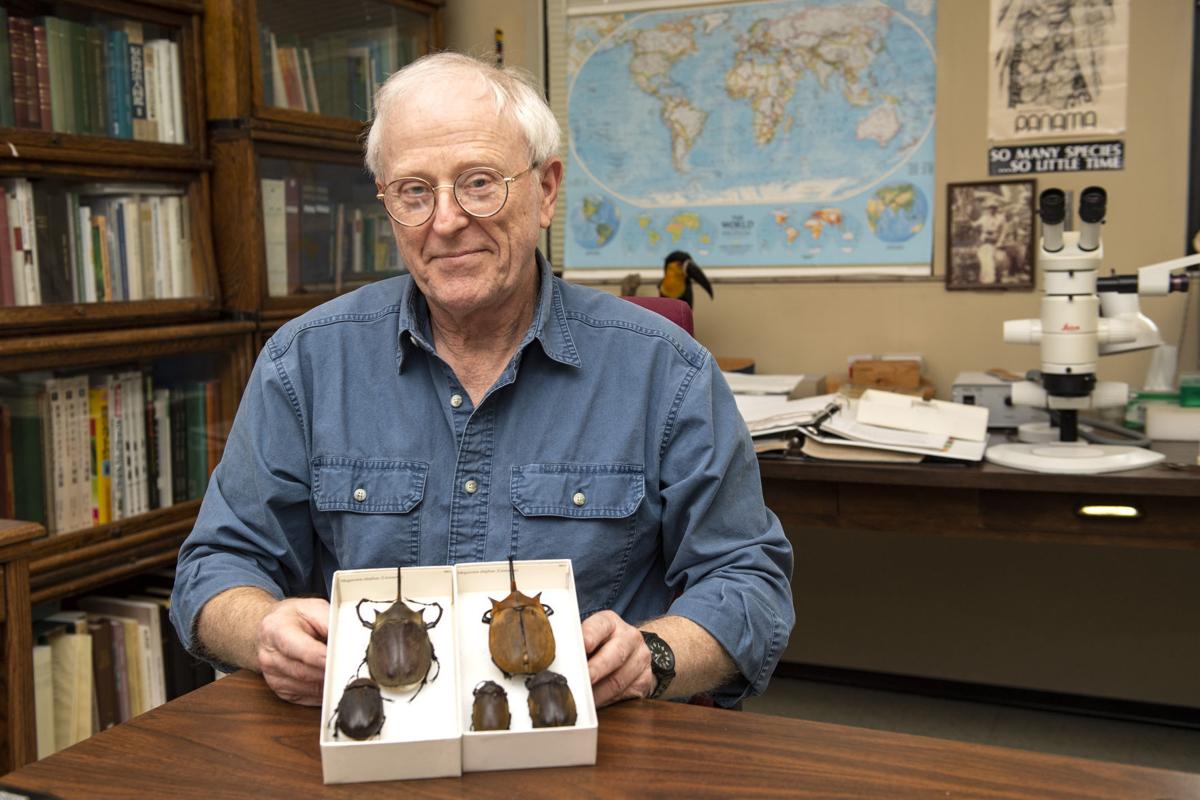 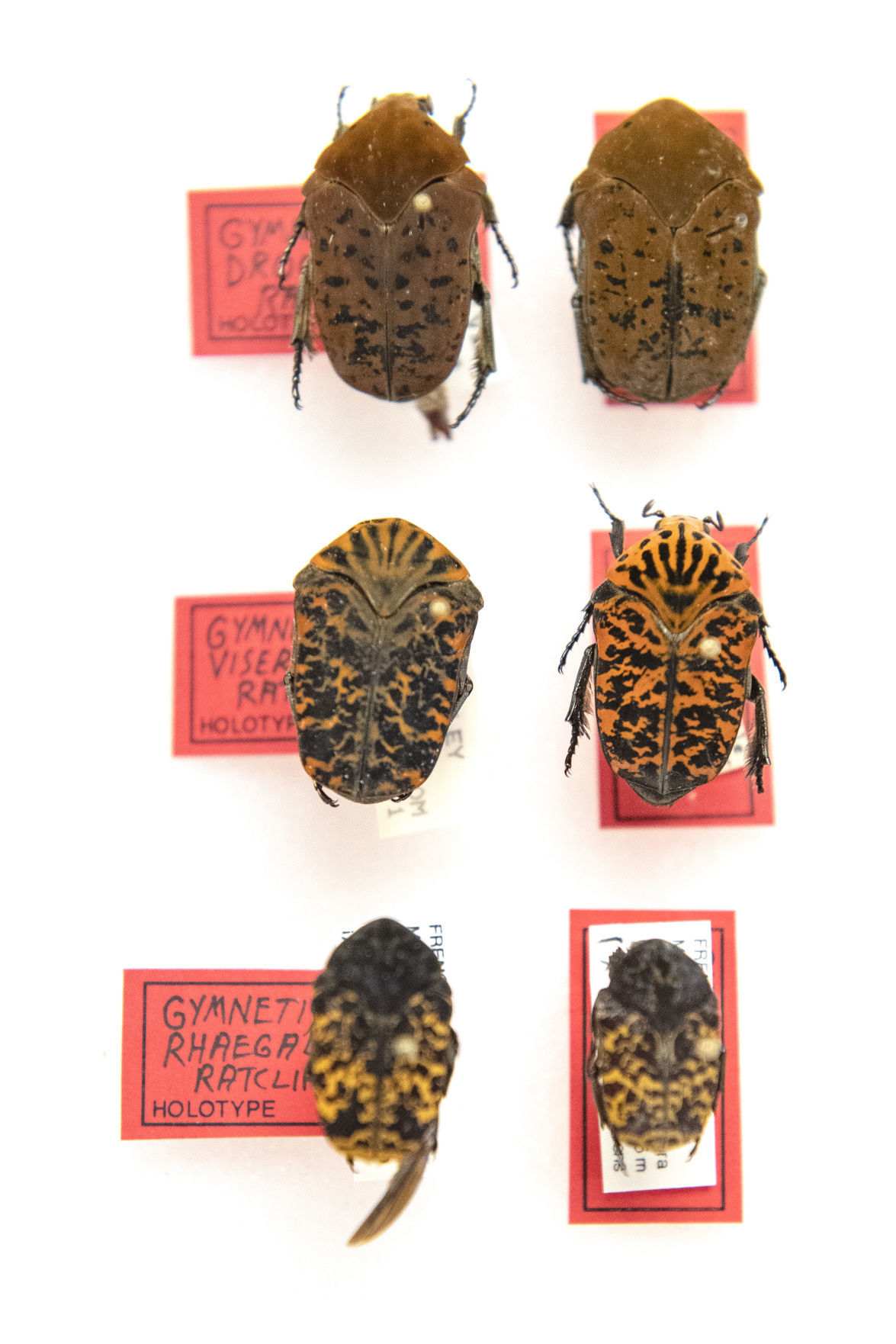 Entomology professor Brett Ratcliffe has named more than 200 species of beetles over the last 40 years, including these three species, which he named after dragons from the HBO series "Game of Thrones" (from top to bottom): Gymnetis drogoni, Gymnetis rhaegali and Gymnetis viserioni. 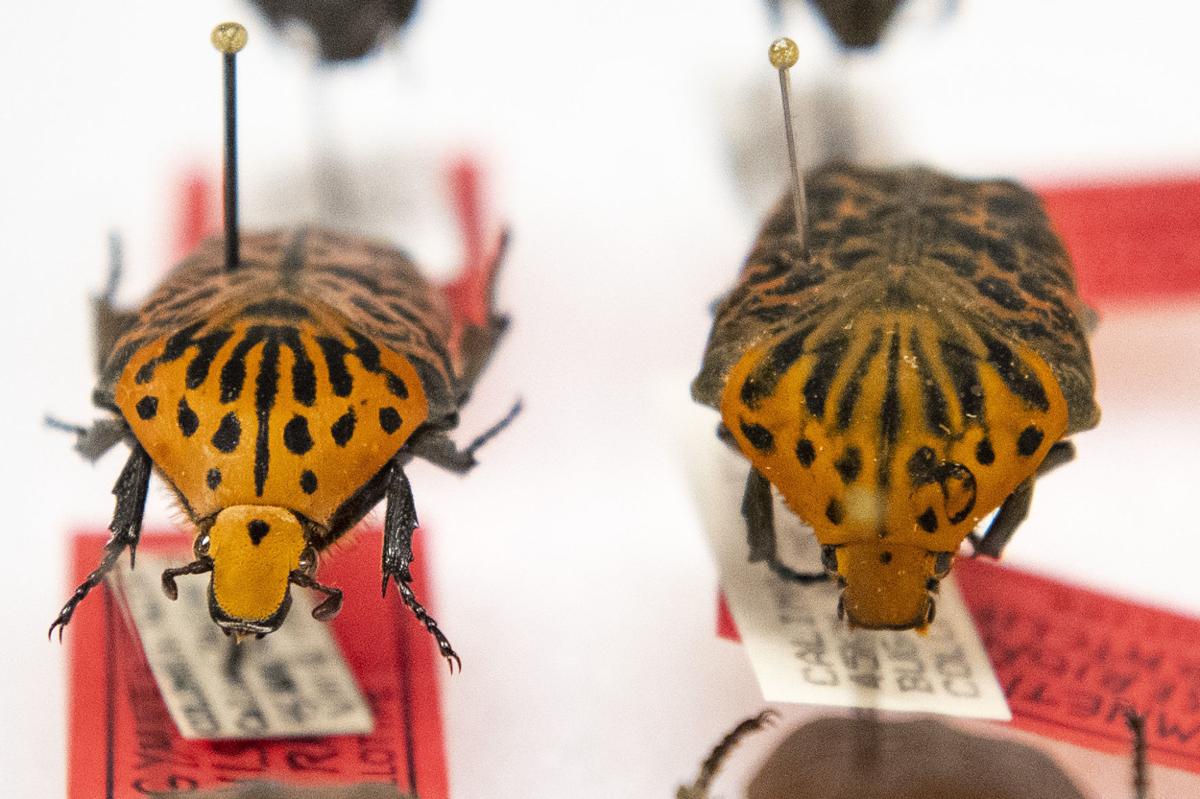 Gymnetis rhaegali beetles were named by University of Nebraska entomology professor Brett Ratcliffe after a dragon from the HBO series "Game of Thrones."

Unlike their namesakes, three species of scarab beetles newly described by University of Nebraska-Lincoln entomologist Brett Ratcliffe do not breathe fire. Or, at least, entomologists and field researchers haven't observed them doing so.

Nor do the scarabs have the thick, reptilian scales and leathery wings like the trio of dragons hatched by Daenerys Targaryen, the Mother of Dragons, Breaker of Chains, etc., in the HBO series "Game of Thrones."

But in a world where millions of variations of beetles exist — roughly one-quarter of all insects on the planet is a beetle — new names are sometimes hard to come by.

"Typically, people name things after some characteristic of the animal," Ratcliffe said in the fifth-floor lab of Nebraska Hall, lined with volumes of reference material related to the world's insects.

"Other times, they'll name them after people who have been important to the discipline, or who helped find the species in nature, or an important colleague you want to give credit to for their life's work."

Sometimes, however, inspiration is derived from the fantasy world created by George R.R. Martin's "A Song of Ice and Fire," which was adapted into the hit cable drama that will conclude next year.

A devoted fan of the novels and television series, Ratcliffe recently named three new species from the Gymnetis genus, scarabs found in a wide swath from the southern United States to Argentina, after Daenerys' dragons: Drogon, Rhaegal and Viserion.

The deep-reddish brown and black-flecked Gymnetis drogoni, was found in the jungles of Colombia, Ecuador, Brazil and Argentina, while the black-and-light orange or tawny Gymnetis rhaegal was limited to French Guiana. The bright orange-and-black Gymnetis viserioni was found in countries where Central America connects to South America.

They are among the hundreds of scarab species described and named by Ratcliffe since 1975, when he completed his doctoral dissertation.

He later moved with his family to Tokyo, where his passion took off among like-minded American and Japanese youth who collected bugs the way others collected baseball cards.

"We collected like you wouldn't believe in pristine habitats," Ratcliffe said. "The exhilaration was just wonderful."

When he later moved to Roswell, New Mexico, Ratcliffe narrowed his field of study to beetles, nature's great recyclers of dung, carcasses and other organic matter, which were more prominent in the desert climate.

After earning bachelor's, master's and doctoral degrees in entomology at UNL, Ratcliffe began a four-decade career as one of the world's foremost experts on scarab beetles, including publishing books detailing species found in regions spanning Costa Rica to Canada, including Nebraska's native beetles.

Each discovery follows an exhaustive process of consulting reference works, dichotomous keys — a kind of "yes" or "no" chart on the observable features of a specimen — and maintaining a working knowledge of the most recent scientific literature available.

Then, Ratcliffe must convince a panel of other entomologists why the insect has not appeared as described anywhere else before it qualifies for publication.

"It's a laborious process," he said. "You have to know your group and their body morphology, have a big reference collection and a really good microscope."

None of Ratcliffe's species have been rejected, although a few have been tagged with junior synonomy status, which appears as an alternative scientific name.

As Ratcliffe tells it, he was out of touch with the world literature while living in the Amazon rain forest of Brazil and beat out on describing a species by a colleague from Hungary.

Ratcliffe has still named more than 200 species of scarab, however, the sheer number giving the UNL entomologist a chance to express his more creative side in his findings.

In 1976, he coined Strategus longichomperus — the long-chomper — after a beetle with long pincers on its end.

About a dozen years later, Ratcliffe submitted the Amblyoproctus boondocksius for a beetle found in a remote area, or as he puts it, "in the boondocks."

And in 1992, a new species of June bug (yes, there are about 300 different species of brown beetles crashing into your screen door in early summer) earned the moniker Cyclocephala nodanotherwon: Not another one.

The curator of Morrill Hall's beetle collection — with more than 2 million species, including "the most gaudy, oh-my-large thing you've ever seen in your life" or others nearly invisible to the naked eye — Ratcliffe has no plans of slowing down.

"I don't have a job, I have a passion," he said. "I'm here late every day, I work Saturday mornings, I eat, breathe and dream scarab beetles."

The designer is looking at her miniature self in 3D.

Off and on throughout Earth's history, global temperatures have risen to melt enough of one of the largest bodies of ice on the planet to crea…

The University of Nebraska-Lincoln named its inaugural vice chancellor for diversity and inclusion Monday, and with it, created a new office f…

With time running out to set an agenda for the coming round of global trade negotiations under the General Agreement on Tariffs and Trade, Cla…

Nearly 75 percent of the time the National Weather Service issues a tornado warning, no tornado develops.

John Janovy Jr. took a local pastor’s retirement advice to get up and out of the house every day.

Entomology professor Brett Ratcliffe has named more than 200 species of beetles over the last 40 years, including these three species, which he named after dragons from the HBO series "Game of Thrones" (from top to bottom): Gymnetis drogoni, Gymnetis rhaegali and Gymnetis viserioni.

Gymnetis rhaegali beetles were named by University of Nebraska entomology professor Brett Ratcliffe after a dragon from the HBO series "Game of Thrones."