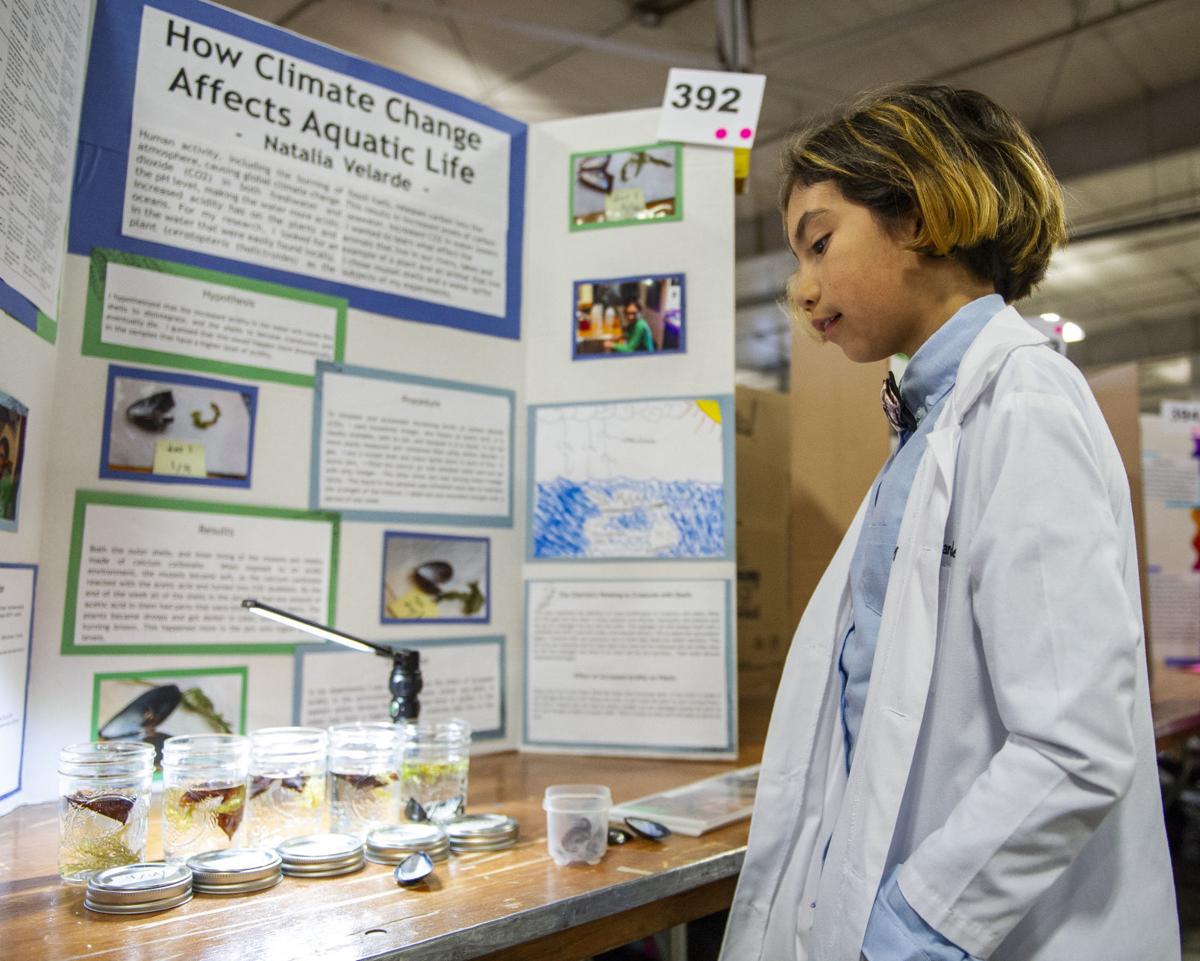 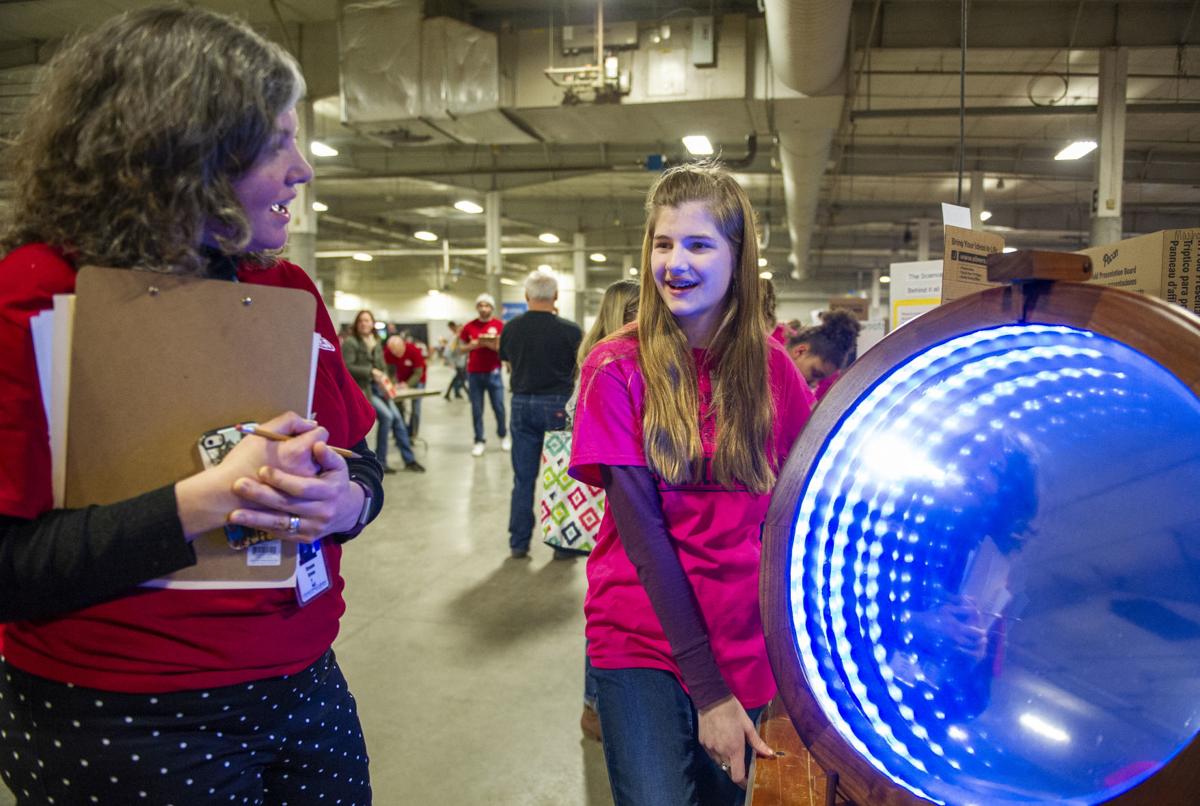 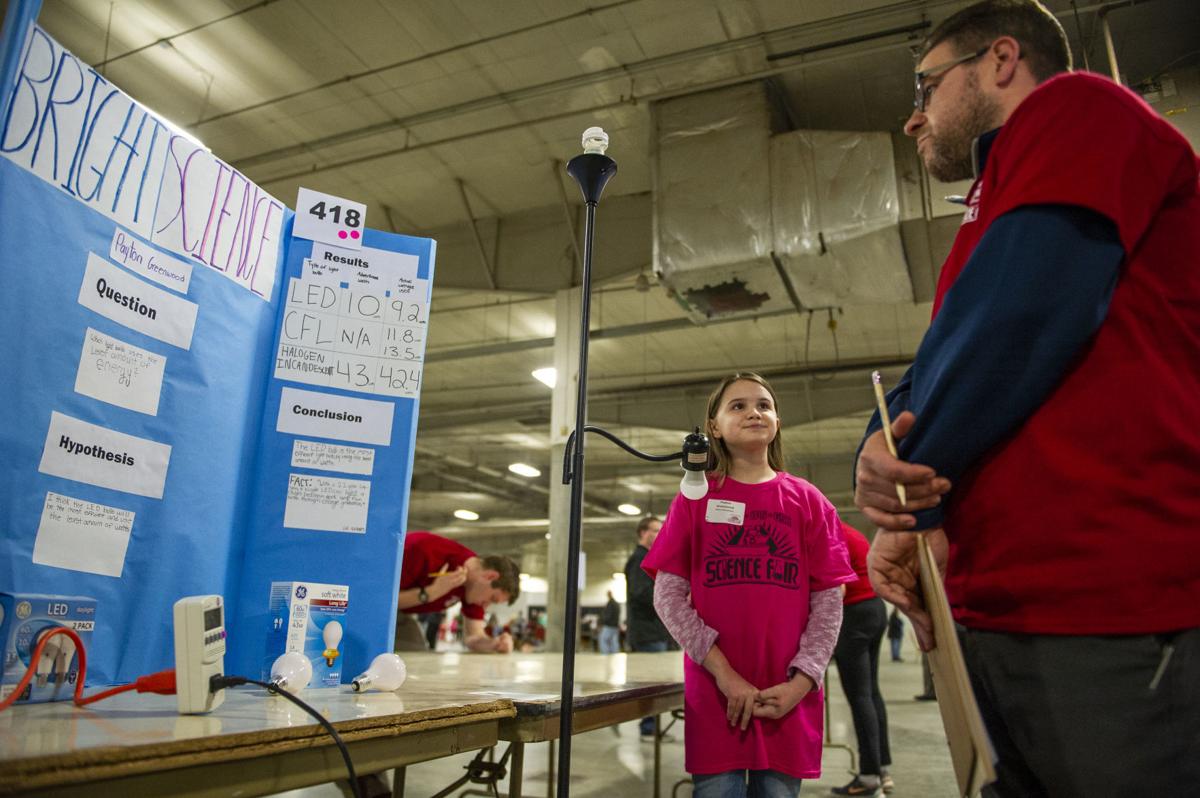 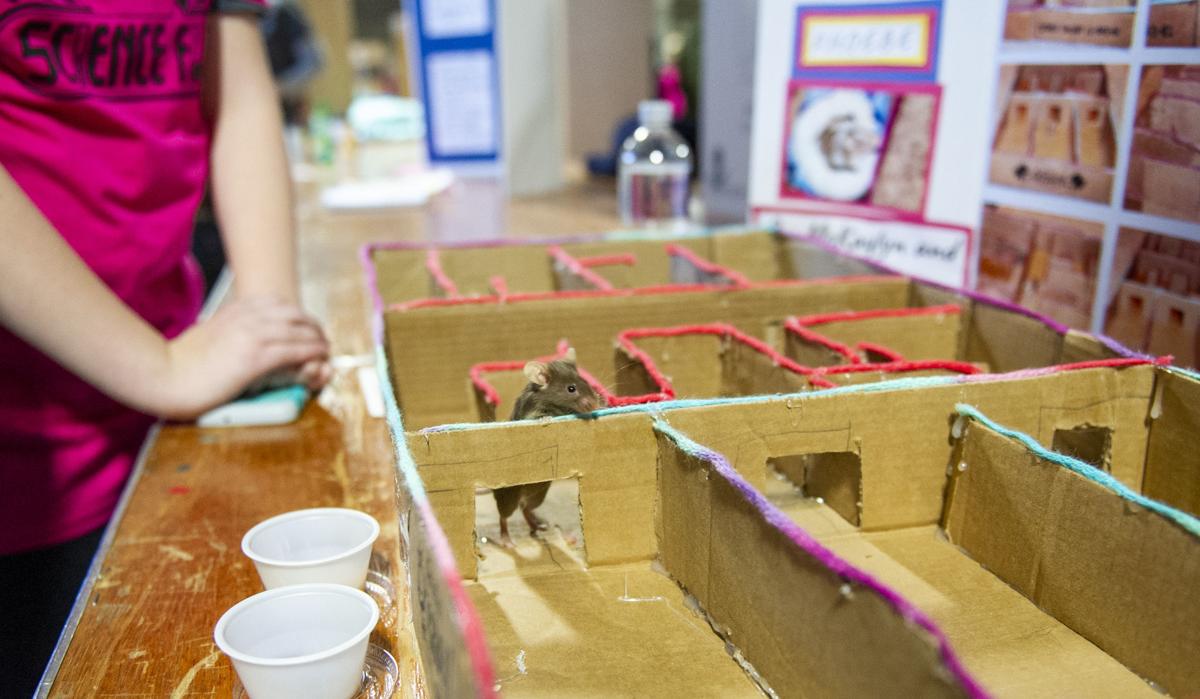 Eleven-year-old Kennedy Bahm (not pictured) watches her mouse finds its way through the maze she built for her science project on Thursday at the Lancaster Event Center. 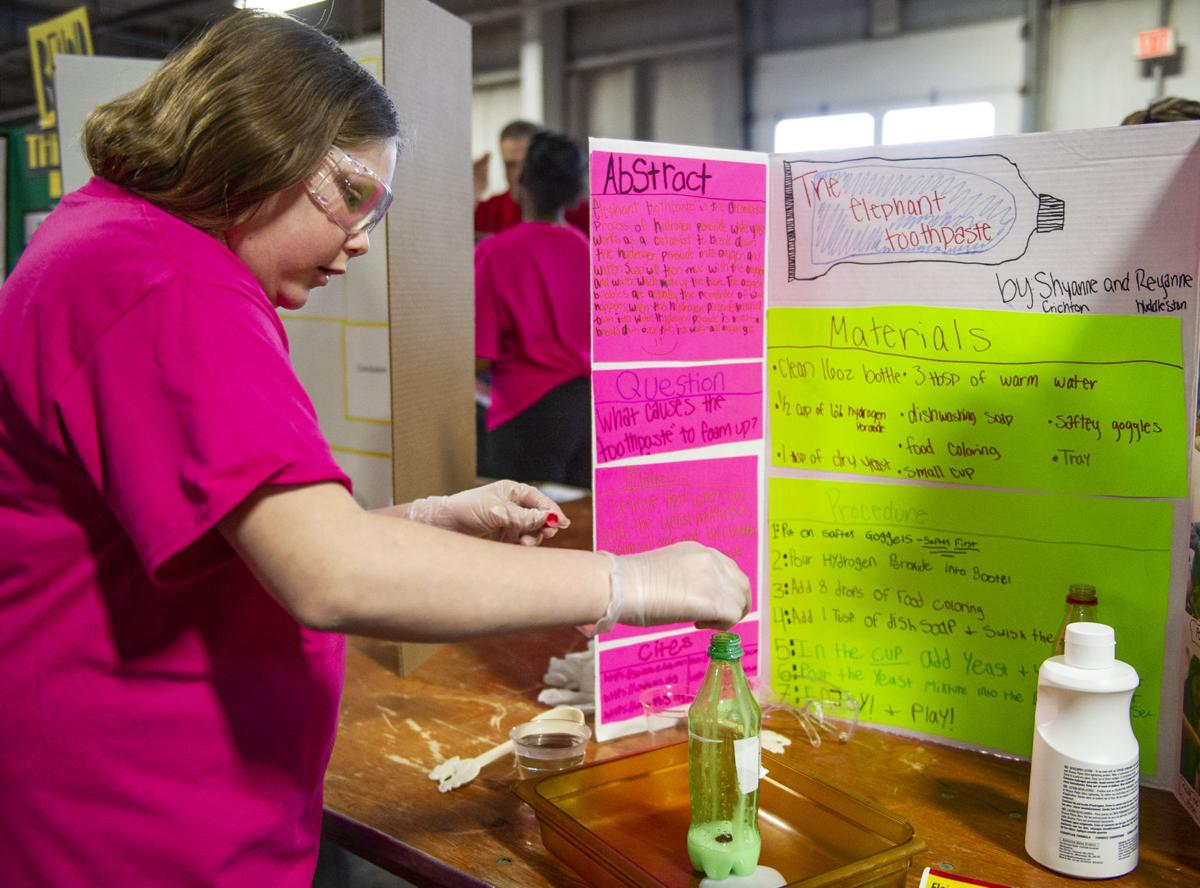 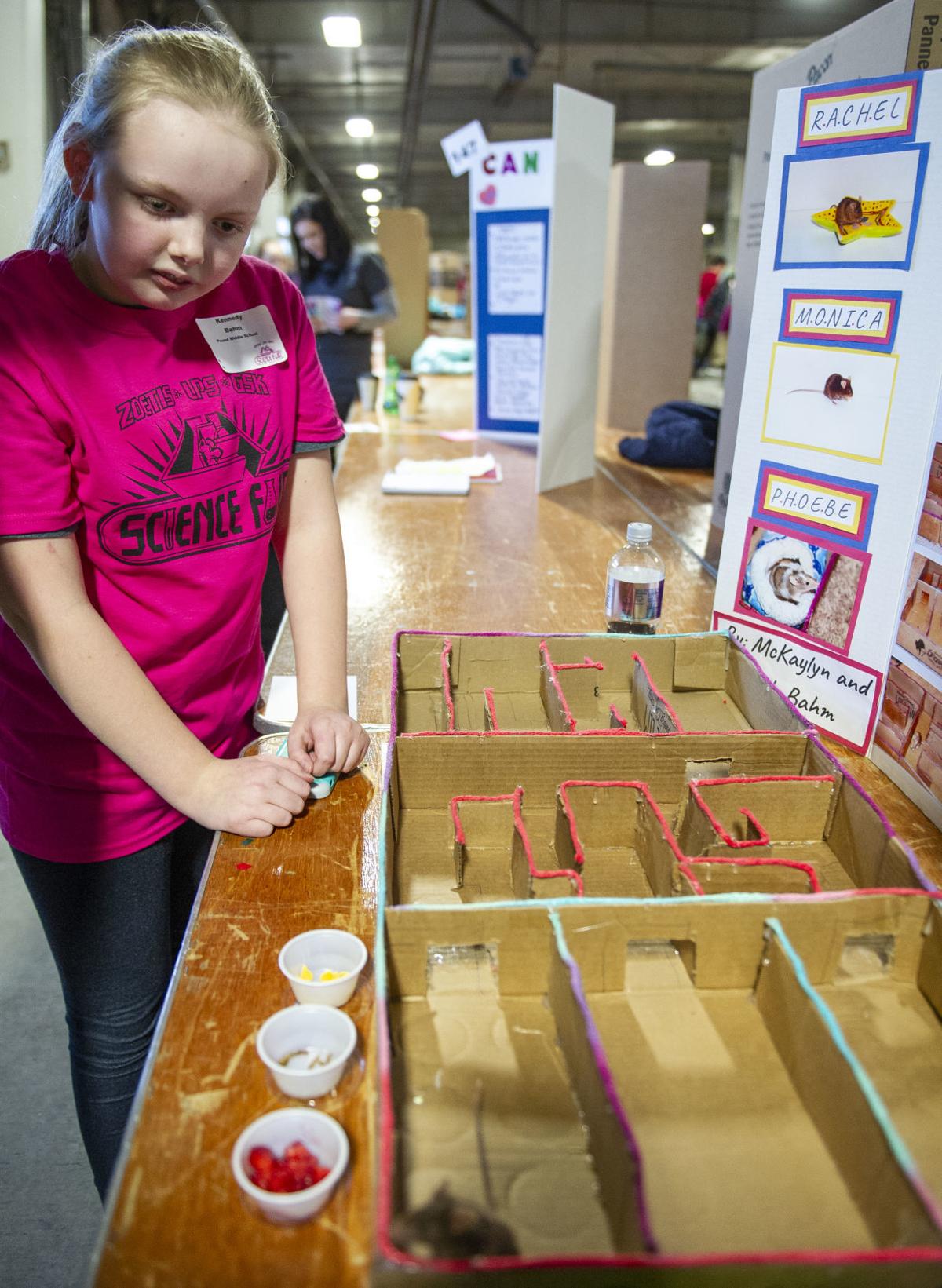 Lincoln, NE - 2/28/2019 -11-year-old Kennedy Bahm watches her mouse finds its way through the maze she built for her science project on Thursday, Feb. 28, 2019, at the Lancaster Event Center. SAVANNAH BLAKE, Journal Star 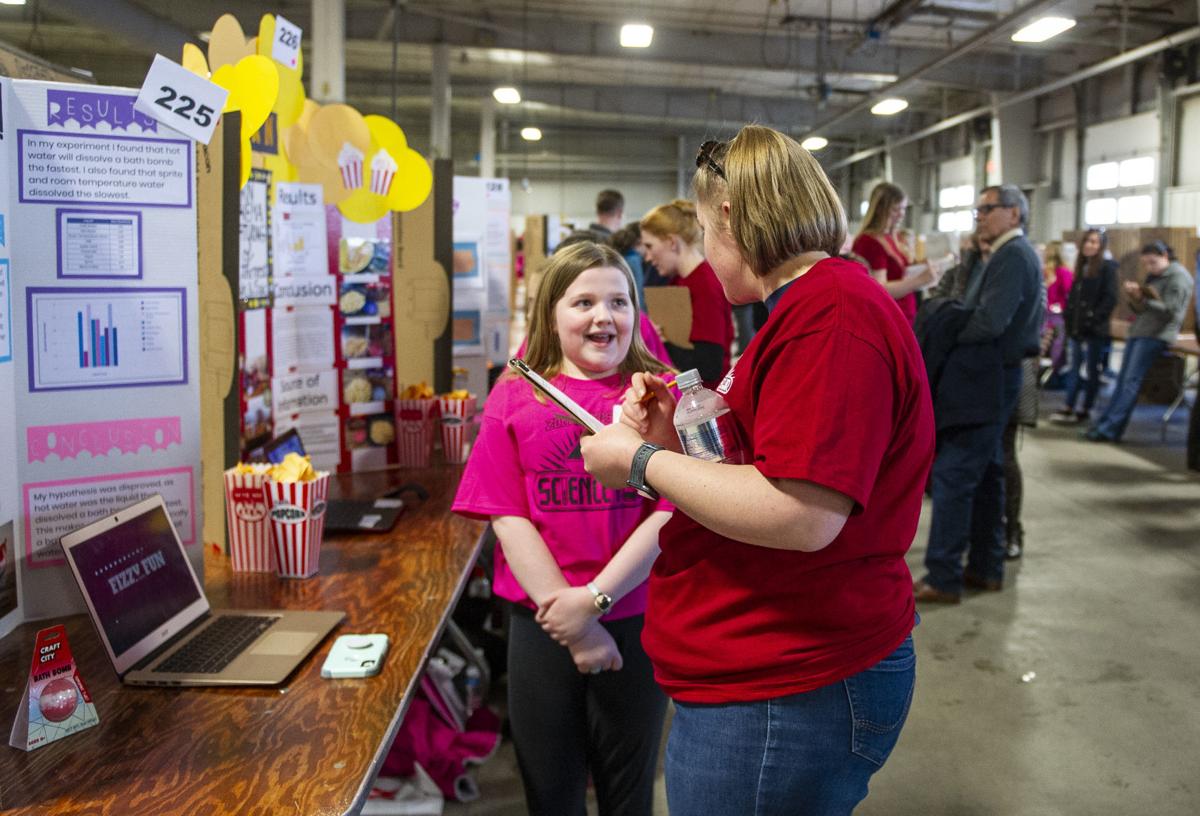 In her crisp white lab coat and bow tie, Natalie Velarde on Thursday looked more like a college professor in a lecture hall than a garden-variety schoolkid at the 24th annual Zoetis-LPS-GSK Science Fair.

"The problem with all those carbon emissions is that it increases the acidity of the oceans," the Sheridan Elementary School fifth-grader explained to judges and curious parents as they walked past her chart-plastered display board at the Lancaster Event Center. "Now, because of this, the problem with shelled creatures is that there's a shortage of carbonate ions, which they use to help build their shells."

Velarde used cups of vinegar-water solutions with mussel shells to drive home increased carbon emissions' effects on shelled creatures. As a judge scribbled notes, she reached into one cup and retrieved a shell, which had become limp and flexible.

"It's basically as strong as a piece of paper," she said, flapping it in the air.

For her efforts and specific focus on the environment, Velarde was awarded a special green ribbon, but science fair director Rochelle Settles said both Velarde and the 400 students who presented their projects took away something even more important: an interest in science.

"It provides students an opportunity to learn science from a project they get to pick and choose," Settles said. "We want students to become scientists in the future."

Velarde said she took the opportunity and ran with it after listening to a news report about scientists discovering shellfish with deformed shells as a result of increased carbon emissions and climate change.

"I knew the cause was carbon dioxide, but I didn't know how it happened or how it worked, so I wanted to find out," she said. "I got to learn some chemistry, which is cool, too."

Other students studied physics and biology as well, many because they "thought it was cool." More than a few people passing by Scott Middle School sixth-grader Isabel Lorimaux's display saw an endless line of reflections staring back at them in her homemade infinity mirror.

People standing around West Lincoln Elementary fifth-grader Yousif Kanil's display had to speak up whenever he gave a demonstration of his amplified laser technology. Using a slinky stuck in a series of different-sized cups, Kanil would strike the slinky and it would emit a loud pinging noise.

"I saw someone do it on YouTube and I've never seen anyone else do it at a science fair," Kanil said. "It's really cool; I like the noises. They sound like the lasers from 'Star Wars.'"

Volunteer judges graded each display on a 100-point scale, scoring them in three categories: scientific thought, thorough display and technical skill. From there, students were awarded purple, blue, red and white ribbons. Judges consisted of LPS employees, University of Nebraska-Lincoln students, Lincoln Electric System employees and anyone else from the public who applied.

Velarde said if Settles hoped the science fair would encourage students to become more interested in science, she could be rest assured.

"I don't really know what I want to do when I get older," Velarde said. "But I'm really into climate change and stuff now. I knew it was bad, but this really let me go into it and see what it does."

LPS board approves more portable classrooms to deal with overcrowding

Portable classrooms — prefabricated evidence of overcrowding — will go up at three elementary schools, one middle school and a high school nex…

A white wedding: Community of Mead steps up in blizzard to save the day

Few brides will agree on what makes the perfect wedding day, although driving snow and dangerous road conditions would rarely fit that criteria.

The city's educational campaign to provide information about the quarter-cent sales tax ballot issue is legal, according to Chris Connolly, ac…

Any new focus programs at Lincoln Public Schools should be embedded into the high schools and not at separate locations, a district task force…

Plan your summer: A list of children's camps and activities for 2019 in Lincoln

Whether your kid wants to explore leadership, nature, science, animals, music, sports, the fine arts or faith, there’s a camp for them in this…

In the midst of the white, ice-encased, traffic-gnarled mess that is Lincoln’s winter, Chuck Morgan is rising.

LPS board member argues to have Pledge of Allegiance start meetings

Lincoln Board of Education member Matt Schulte wants to change board policy to include the Pledge of Allegiance as part of the board meetings.

A fifth-grade teacher at North Bend Central Elementary School was surprised Monday with the Milken Educator Award, one of the most prestigious…

Kevin Loope and his family only had a little bit of time left to change history, but they were stumped.

Eleven-year-old Kennedy Bahm (not pictured) watches her mouse finds its way through the maze she built for her science project on Thursday at the Lancaster Event Center.

Lincoln, NE - 2/28/2019 -11-year-old Kennedy Bahm watches her mouse finds its way through the maze she built for her science project on Thursday, Feb. 28, 2019, at the Lancaster Event Center. SAVANNAH BLAKE, Journal Star