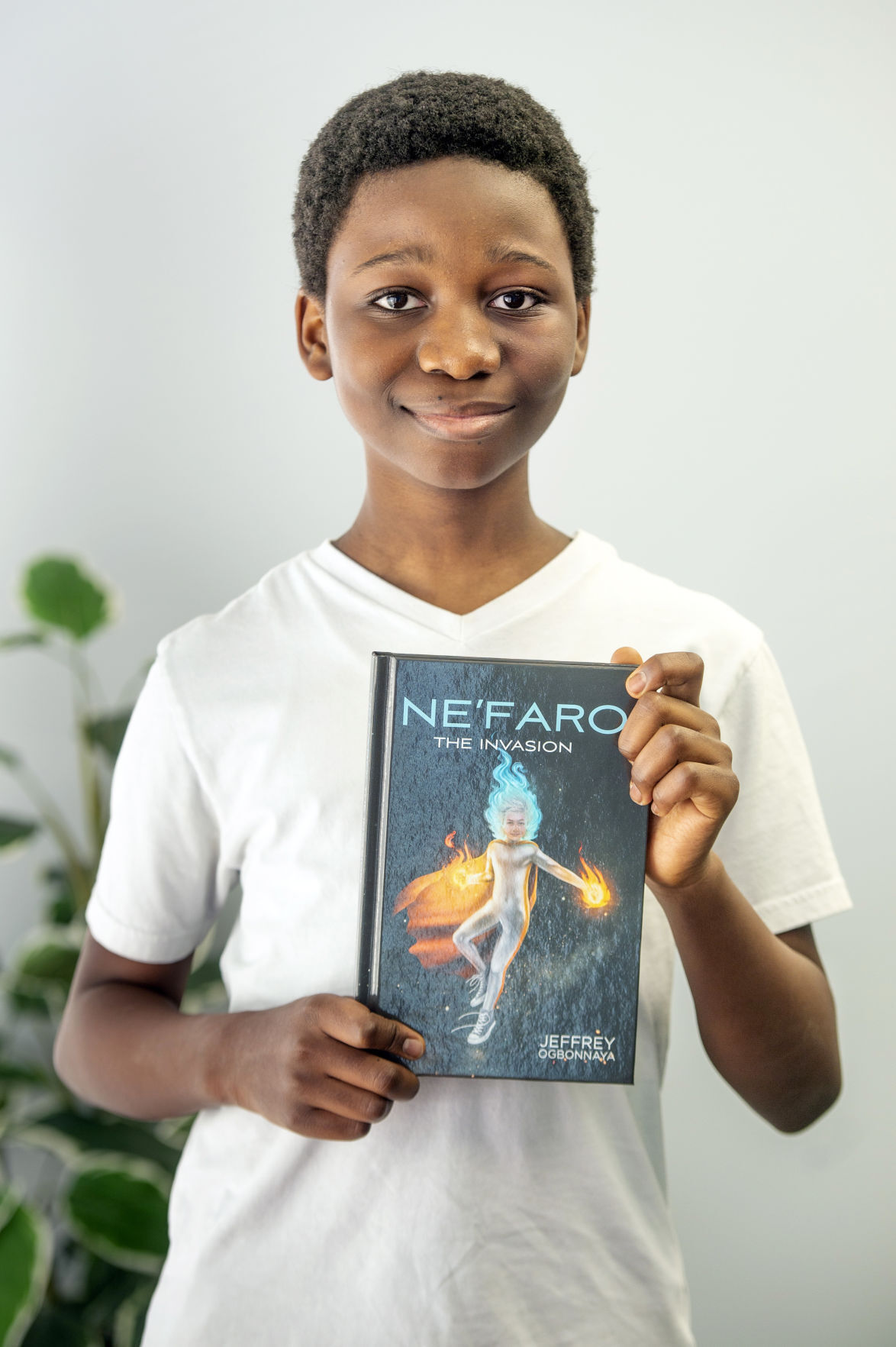 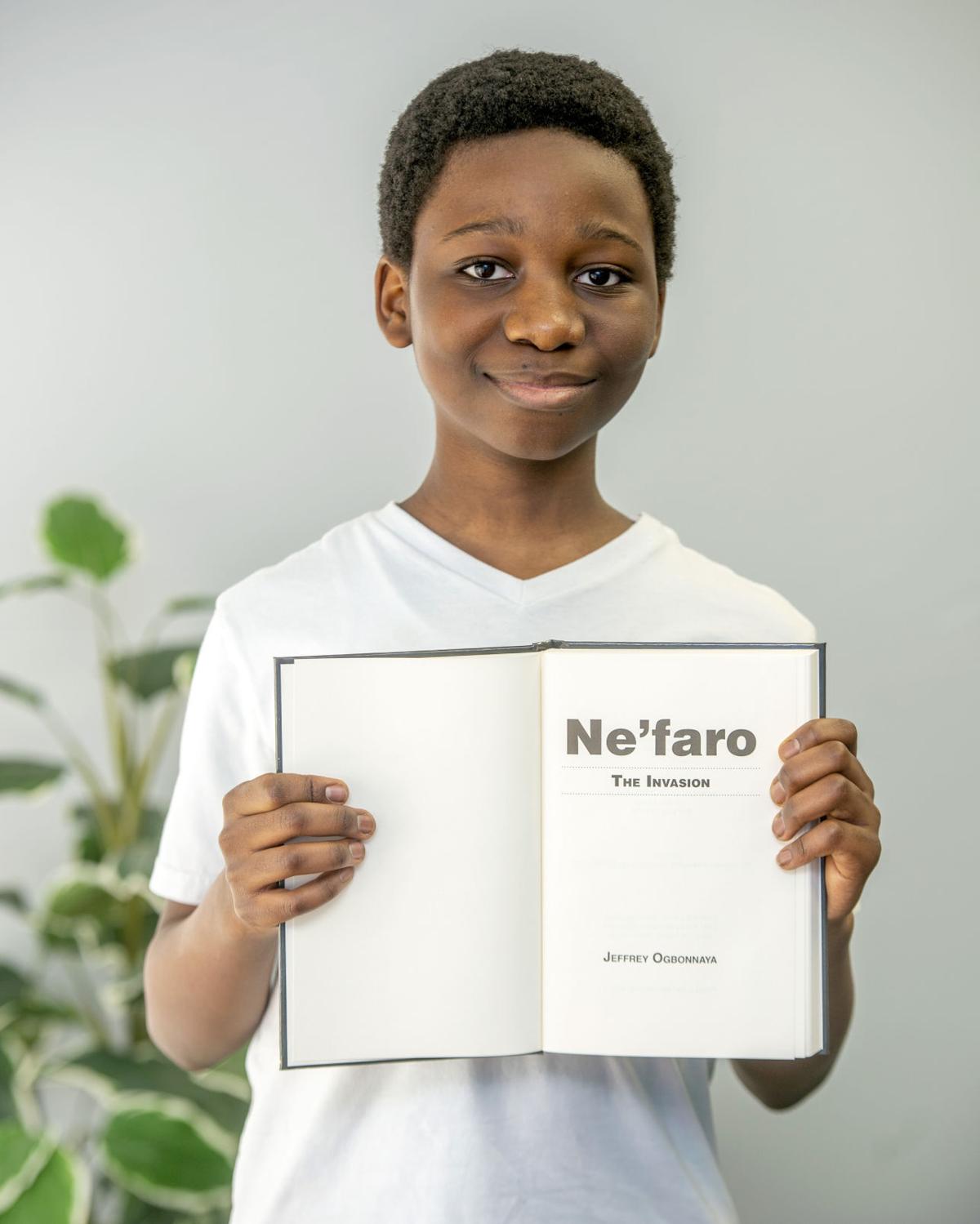 Jeffrey Ogbonnaya, a seventh grader at Irving Middle School, poses for a photo with his first novel, "Ne'faro: The Invasion," which he started writing in third grade.

The seventh grader at Irving Middle School loves music — he sings in the Lincoln Boys Choir, plays violin in the school orchestra and takes piano lessons — but it wasn’t Dolly’s crooning that he appreciated.

It was the books. So many books, delivered straight to his home from Dolly Parton’s Imagination Library, a foundation that mails a book a month to children from birth until they start school.

They fed the young boy’s hunger for the written word and the world they opened up to him.

Jeffrey was just 6 months old when he and his family moved from Nigeria to Michigan, where his dad was working on his degree in software engineering.

“We didn’t have a lot of resources. He started reading the little books we had,” said his dad, Ogbonnaya Akpa.

They heard about Parton’s foundation, and every month, a book would arrive in the mail. They kept that up, until Jeffrey’s parents got him a Kindle.

“At the rate he was reading, we couldn’t keep up,” Akpa said.

The family moved from Michigan to Lincoln in 2012 so Akpa could pursue his doctoral degree in instructional technology. Jeffrey’s mom, Amarachi Ogbonnaya-Akpa, is a doctoral-prepared nurse practitioner who specializes in psychiatric-mental health services at her clinic YOUniq Health. Akpa runs the business side of the clinic.

Jeffrey’s parents were busy with work and school, and so, at 5, he started reading to his two little sisters, then making up stories once they’d read all the books. He started writing stories, too.

One day, in his third grade language arts class at Sheridan Elementary School, his work done, he had an idea.

“I was just sitting there,” he said. “I was bored and wondering what I could do.”

He decided what he could do is write a book.

He was a fan of science fiction and fantasy even then, but it took a couple of days for him to flesh out the story, the beginning and the end, at least. The middle unfolded as he wrote.

The characters came easily enough — they'd be kids and they’d do something heroic. They lived on Earth in the future, when school buses are solar-powered, couches are shapeshifting and Earth averted extinction years earlier when world leaders came together on climate change and enacted laws and policies to combat it.

Because he loves fantasy, he created beings from other planets, the good guys who needed help and the bad guys taking over the world.

The bad guys are called Ne’faro from Ne’far, one of a ring of planets deep in the Milky Way, and they’re bent on destruction and galactic domination.

Four kids from Earth gain superpowers and are thrust into the battle. Others join the quest along the way. They are African American and white, Hispanic and Asian, male and female.

That was important to Jeffrey.

“Growing up, I didn't see a lot of the different races and genders represented in the books I read, even the TV shows I watched,” he said. “So I wanted to put that in my books, to make up for what was missing.”

The name for the bad guys — which became the title of the book — came from the word nefarious. (We did say Jeffrey is an avid reader, right?)

He used the Chromebook the school gave him for homework, writing after school or early in the morning — his sisters would often wake up and find him on the couch, the Chromebook in front of him. When he finished his schoolwork, his teachers would let him go to the library to write.

His parents got wind of the budding author’s plans, and they thought it was a fine idea, as long as it didn’t get in the way of schoolwork.

He got some ideas from other books he’d read, some from TV shows, but he’d take the ideas and make them his own. The main characters, he said, are patterned after him and exhibit different parts of his own personality.

MLK Youth Rally will be held virtually this year

Sometimes, video games were a bigger draw than an empty page waiting to be filled, and somewhere around Chapter 9 his enthusiasm waned.

His parents stepped in, prodding Jeffrey to keep going. He’d told them his goal was to publish the book. They told him if he didn’t get it done that would never happen. So they gave him an ultimatum: finish it by spring break of fourth grade or call it quits.

He didn’t quit, not until he had a 173-page work of fiction.

There are certain themes that run through the book: diversity, inclusion, teamwork.

“My main characters are all part of a team; they have to work together to fight off the Ne’faro,” he said. “Not any single one can do it alone."

Being able to learn about and tackle such themes is one of the things that appeals to the young author.

“It allows me to kind of see different ideas and — especially with fiction — there’s so much you can do with it: apply different ideas, teach people things, entertain people,” he said. “It’s just fascinating to me. Just the possibilities.”

Once he had a draft finished, the publishing process began. With the help of his parents, he found a local publisher, then moved to Newman Springs Publishing. They  ran a Kickstarter campaign, raising more than $6,000 to help get “Ne’faro: The Invasion” published. They found an illustrator.

The book went through several rounds of editing and was supposed to be published last summer, but the pandemic delayed that. By mid-December, the first copies arrived in the mail.

As parents, Akpa said it was important that he and his wife support whatever their kids decide to do.

“We grew up in times and a society where family decided what you would do when you grew up,” he said. “Somehow, we ended up not doing exactly that. ... We decided as parents, we wouldn’t force them to do anything; they should be able to become whatever they want to be.”

If they encouraged their son, they figure he will be encouraged to pursue whatever else he wants to do in life.

“Ne’faro: The Invasion” is available online through Amazon, Apple iBooks Store, and Barnes and Noble — and the story’s not finished.

He’s started on the second book of what will now be a trilogy.

Jeffrey says he likes the freedom to say what he wants, to put his thoughts down, the lessons he’d like readers to take away. It would be the same with a movie, he figures, but that’s expensive and takes so much time.

“With this, you can just sit on your couch and knock down your ideas and the words just come out,” he said. “It’s kind of peaceful sometimes.”

FIVE STORIES FROM THE YEAR A PANDEMIC TURNED EDUCATION UPSIDE DOWN

Five stories from the year a pandemic turned education upside down

Education in an upside-down year: Rough times for seniors

Listening to high school seniors describe how they felt about missing the milestones of their senior year made the early impact of the pandemic very real.

Education in an upside-down year: Stepping away from school

Southeast Principal Brent Toalson’s heartbreaking -- but ultimately hopeful -- decision to retire rather than put his son at risk illustrated the hard decisions many educators faced.

Education in an upside-down year: Learning at home

Education in an upside-down year: Shortage of substitutes

As the pandemic wore on, teachers had to juggle new technology, in-person and remote learners -- a job that kept getting harder as a substitute shortage put more stress on teachers and threatened the ability of schools to stay open.

Education in an upside-down year: An outbreak

A fascinating look at a COVID-19 outbreak in an early childhood program that put teachers on edge and illustrated the challenges of tracking the virus.

Viral effect: Tracking an invisible stalker as its spreads through LPS preschool program

Kwame Dawes has been called the "busiest man in literature" by many other poets and writers. The Ghana-born Jamaican recently accepted the position of editing the "American Life in Poetry" column.

LPS officials said the delay likely was caused by so many students trying to get into class all at once, but that a major capacity update is coming soon.

Directed by Frank Marshall, who made “The Curious Case of Benjamin Button” and “Seabiscuit,” the documentary is framed by the memories of Barry Gibb.

Students have until Jan. 31 to apply to attend a high school outside their home attendance area and can view the pre-recorded programs once they go live between Wednesday and Jan. 21.

Teaching social studies in Lincoln as history unfolds in D.C.

Social studies teachers helped students process the siege of the US Capitol Wednesday, using the skills they spend each year teaching them -- how to find reliable sources, have a civil discourse.

The Lincoln Board of Education gave its approval for the district to become the first in Nebraska to join more than 250 other school districts around the country suing Juul for marketing its popular vaping products to young people.

Jeffrey Ogbonnaya, a seventh grader at Irving Middle School, poses for a photo with his first novel, "Ne'faro: The Invasion," which he started writing in third grade.