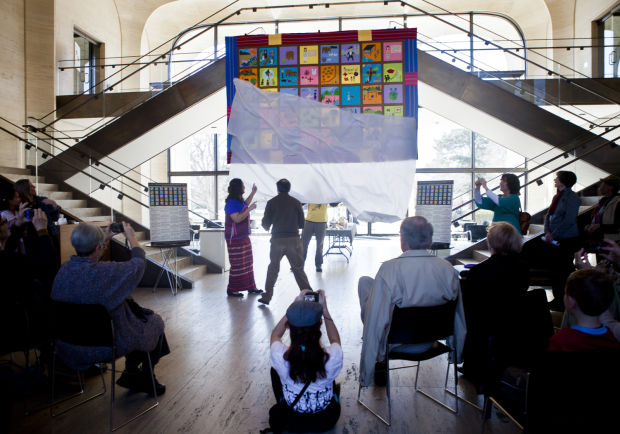 Students and their families watch as a quilt crafted by Karen immigrants from Lincoln High School is unveiled at the Sheldon Museum of Art on Sunday. 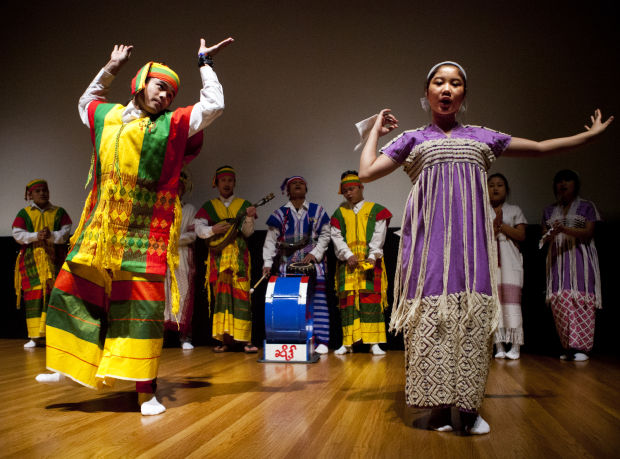 The quilt represents a lot of things. For Eh Tee Day, 15, her section at the top stands for a small field at her refugee camp back in Myanmar. Sometimes, she would sleep there. Other times, she’d study. When she grows up, she wants to be a teacher.

For Suan Khual, his section up in the middle represents the farm back in Myanmar. The cows on his pale blue square represent the travel from his home to the rice fields, where he and others collected rice to sell later. The Lincoln High senior wants to be an engineer.

The 40 sections of the quilt represent 40 memories and 40 dreams from 19 local Karen immigrants, English Language Learners at Lincoln High School. It's the final product of the group's “Quilted Conscience” project, intended to help immigrants feel more accustomed to U.S. life.

The pieces assembled, the full quilt was revealed Sunday to the students and their families at the Sheldon Museum of Art.

The project began with a vision by New York resident and Grand Island native filmmaker John Sorensen, who wanted to make a documentary about Grace Abbott’s legacy.

“She is the most important person to have ever come out of Nebraska,” Sorensen said of the famous social worker who was born in Grand Island.

Abbott devoted her life to fighting for immigrant and children’s rights. Being from Grand Island also, Sorensen felt driven to show how Abbott's community is doing now, more than 60 years after her death.

His documentary shows a group of 16 Sudanese girls in Grand Island making a quilt of their own. After it aired, Sorensen began receiving requests to do the workshop with members of other ethnic groups, including Lincoln.

Susan Hertzler, chairwoman of Lincoln High’s English Language Learner department, chose the Karens because of how rapidly their population is growing in Lincoln schools.

Hertzler and Sorensen, along with other volunteers, helped the students with their quilt sections beginning in September. They also helped acclimate the students to American life, while celebrating their own culture.

“The United States is filled with immigrants. It’s what we’re built on, it’s what makes us special,” Sorensen said. “We’ll exceed at a higher level if we embrace that.”

The exhibit was the first of its kind in Lincoln, though Sorensen hopes to make it an annual show. There is another planned for Omaha in September.

“Here, they get to celebrate their culture,” Hertzler said as drums played and students danced in traditional bright orange and yellow garments. “They don’t get to do this a lot. They have school and soccer. American things. This way, they get to keep their culture.”

The district board of education earlier this month approved nine resignations, many of which were solely because of the mandate, said Superintendent Todd Chessmore.

Lincoln Public Schools is moving away from Reading Recovery, its longtime reading intervention program aimed at catching up first graders struggling with reading and writing through one-on-one lessons.

Lincoln Northwest High and Robinson Elementary, names for the two other schools being built with money from a $290 million bond issue, were approved last month.

LPS officials stressed that students who already attend a school won't have to change schools, even if boundaries shift. Students will also be allowed to go to a school their sibling already attends.

"Naked" dance parties. Zooming in a suit coat, tie and boxers. Furry friends becoming coworkers. These are the kinds of pandemic happenings a new archive project wants to make sure aren't forgotten.

Proposed changes could lead to end of librarians in Nebraska schools, advocates say

LPS, which has more than 40,000 students and employs more than 60 school librarians, would be required to employ only one half-time librarian for the entire district if the state's accreditation rules are changed.

Students and their families watch as a quilt crafted by Karen immigrants from Lincoln High School is unveiled at the Sheldon Museum of Art on Sunday.