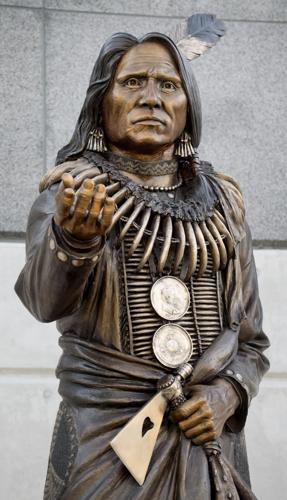 A bronze depiction of Chief Standing Bear is displayed along Nebraska Centennial Mall in Lincoln.

The leader of Nebraska's Ponca Tribe was pleasantly surprised when he heard the news.

And the history of the moment wasn't lost on him, either.

A committee assigned with recommending a name for the new high school in southeast Lincoln chose Standing Bear High on Friday, named for the trailblazing Ponca leader whose monumental challenge in an Omaha courthouse in the late 19th century marked a tectonic shift in Native civil rights.

The recommendation goes to the Lincoln Board of Education, which must approve the name.

"It's historic," said Larry Wright Jr., the tribe's state chair. "Just thinking about all the other names that have been put forth, not only in the high schools but other schools, to have that consideration memorializing (Standing Bear) is just huge."

A majority of the 11-person committee comprised of Board of Education members and those from the community coalesced around Standing Bear during a Friday meeting, marking a significant departure from the long-running practice of linking the names of Lincoln's public high schools to a direction.

Other favorites for the school set to open in 2023 at 70th Street and Saltillo Road included Saltillo High and Lincoln South High.

Committee members meeting Friday expressed a desire to properly honor the Indigenous community in Nebraska and at large, especially at a time when the use of Native names and likenesses has becoming increasingly problematic.

"If there's one place that can do this right, it's Lincoln, Nebraska," said committee chair Bob Rauner, who also serves on the school board.

"It's reparative and restorative," another member remarked.

"It becomes a learning opportunity," said a third.

The committee approached Wright about the name, and it plans to continue to work with the Ponca Tribe throughout the naming process.

"The willingness to reach out at the outset of their process and see how we might feel about that is very commendable -- that's a good thing for us," Wright said.

The recommendation comes with a pledge that the district continue to work closely with the Native community if the name is approved -- especially when it comes to deciding on a mascot and school colors.

The committee's recommendation is expected to go before the board at its May 25 meeting.

Standing Bear became the first Native to be recognized as a person after a 1879 court case in which he challenged the U.S. government's official views of Indigenous peoples and their right to habeas corpus — "I am a man," he famously told a judge in an Omaha courtroom. "The same god made us both."

The Ponca leader, who was born in what is now Nebraska, is also the namesake of an elementary school in Omaha and a likeness of the chief stands in the U.S. Capitol's Statuary Hall and along Nebraska Centennial Mall in Lincoln.

The committee whittled down hundreds of suggestions from the community to just six and many expressed an early interest in Standing Bear.

Then the name was put before students at Moore Middle School for a ranked-choice vote.

Nearly 46% of Moore students surveyed picked Lincoln South as their favorite. About 16% went for Standing Bear.

The southeast high school is one of two new high schools being built with money from a $290 million bond issue passed last year. Another naming committee last month chose Lincoln Northwest as its recommendation for the new high school on the southern edge of Air Park, which is set to open in fall 2022.

With East, Northeast, North Star, Northwest, Southeast and Southwest all off the board, the committee meeting Friday in some ways faced a fork in the road.

Board member Lanny Boswell, who served on the committee, said the school potentially represented either the last time the district went with a directional name or the first time it honored a person who met "the threshold."

And Standing Bear clears it, he said.

Felecia Welke, a Ponca woman and Lincoln native who served on the committee, also voiced support.

"I don't even have a second choice," she said. "I just think it would bring a lot of representation to us as Indigenous people who are set in an urban setting."

Others, like City Council member and former school board member Richard Meginnis, viewed Lincoln South as the most conventional route.

"I guess I'm the one who likes vanilla ice cream," he said.

Meginnis cited potential challenges for teachers in navigating a more sensitive name like Standing Bear. But others said the name could be an educational opportunity.

"This is an opportunity to help chart the future, help change perception going forward," said Halley Kruse, who served on the panel.

Wright, who was a part of the naming committee that recommended Lincoln Northwest, said it's an honor that so many Native names were put forth for the new schools. Susan La Flesche Picotte, the first Native doctor, received an honorable mention as part of the committee's recommendation for the northwest high school, which means another space at the school could bear her name.

And now the Standing Bear recommendation represents an even bigger step forward in honoring the Native legacy of Nebraska.

Said Wright: "It's an honor and something that will make our people really proud."

Students in LPS' remote school will use district's two-in-one Chromebooks; deadline to enroll in program extended

Our best Omaha staff photos of May 2021

Danek, Mayhew fend off challengers as all four incumbents win reelection to Lincoln school board

Both Kathy Danek and Don Mayhew won sixth terms to the board.

The meeting room erupted in applause several times after opponents stepped to the podium and delivered their objections. Opponents outnumbered supporters about 2-to-1.

One of Standing Bear's descendants is asking a museum at Harvard University to return a tomahawk that once belonged to the Ponca chief.

Former Hartington Cedar Catholic principal and current Pius X assistant principal Terry Kathol will take over the reins from Tom Korta, who has served as principal for nearly 15 years.

Superintendent Steve Joel said the fact that vaccines will soon be widely available to those age 12 and older, combined with dropping coronavirus case numbers, prompted the review.

While courses have not been finalized, some offerings will include classes in digital design, sports and event marketing, video production, web design, programming and entrepreneurship.

The district tapped Andrew Ashelford to lead the nutrition services department following Edith Zumwalt's retirement after 31 years in that role.

Steve Laravie, a great-great-great-great-grandson, presented a traditional Native performance at the meeting at which Standing Bear High, the name recommended for the new high school, received consideration.

A new roof was installed two years ago, and the original windows and lap siding of the wood-sided, 33-room structure founded by Dr. Susan La Flesche Picotte have been restored.

In a symbolic gesture imparting good health for the future, ironworkers in neon-green vests and white hard hats put the last major steel piece of Standing Bear High School into place on a windy Friday morning.

After a student vote, the Grizzlies — and a color scheme of charcoal gray, navy and Carolina blue — were chosen to represent the new high school.

A bronze depiction of Chief Standing Bear is displayed along Nebraska Centennial Mall in Lincoln. 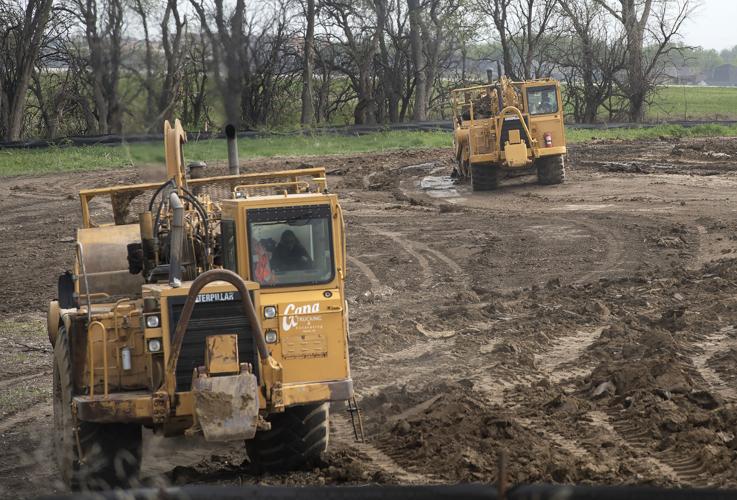 Dirt work continues Friday near 70th Street and Saltillo Road, the site of the new high school in southeast Lincoln. 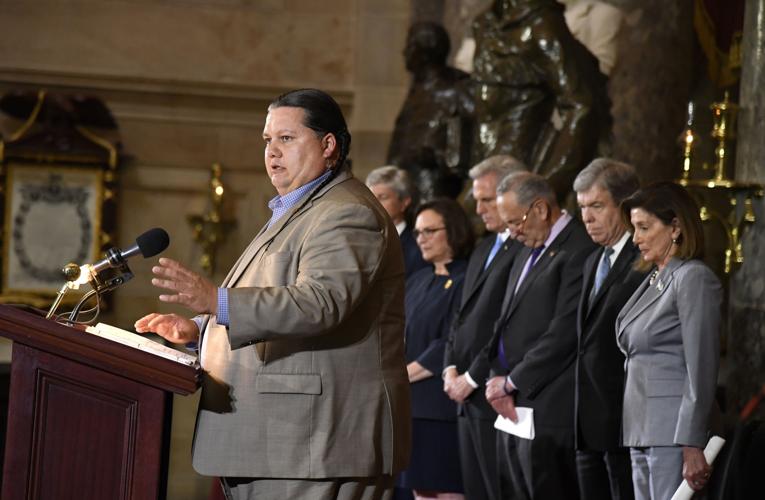