Nebraska students fared worse on state assessments last spring compared to before the pandemic, but Lincoln Public Schools leaders are raising questions about the validity of the results and new school performance classifications that are largely based on the scores.

Statewide, 47% of students were proficient in reading, while 46% met the proficiency benchmark in math, according to results of the state assessment administered by the Nebraska Department of Education in the spring to students in grades 3-8.

That's down from the 52% of students who were proficient in both math and reading before the pandemic.

High school juniors are assessed through the ACT. and scores are reported in terms of the percentage of students on track for college.

Just 46% and 44% of juniors met expectations in reading and math, respectively, down from 51% in reading and 52% in math in 2018-19. Forty-eight percent were on track in science, down 5 percentage points.

The latest results of the Nebraska Student-Centered Assessment System, the state's assessment framework, provide one of the first holistic evaluations of students throughout the pandemic, although the assessment has changed since COVID-19 disrupted classrooms.

Under the new assessment model, which combines elements from the old format and the MAP Growth assessment, students would be evaluated over the course of the year in what's known as a "through-year" model.

The state had planned to roll out the modified assessment in 2019-20 before COVID-19 got in the way. Last school year, the number of Nebraska students assessed was back at its pre-pandemic normal of more than 99%.

Last school year, there were roughly 77,000 students statewide who missed at least 10% of school, double the pre-pandemic number.

Walz, chair of the Legislature's Education Committee, and Linehan, who heads up the Revenue Committee, offered a number of solutions Wednesday, providing some early insight into possible legislation in the upcoming session.

Walz pointed to the need for more early childhood and early literacy investments. She also emphasized the need to tackle persistent teacher shortages through recruiting and retainment efforts.

"I think the No. 1 thing we can do as Nebraskans is elevate the role of the teacher in the classroom," she said.

The assessment scores are a major factor in the state's accountability system, which classifies districts and elementary, middle and high schools as excellent, great, good or needs support in order to measure their year-to-year progress. The state hit pause on releasing new classifications after COVID-19 shuttered schools but revived them this time around.

LPS' overall classification dropped from great to good, while three of the district's schools were listed as needs support: Saratoga Elementary and Culler and Dawes middle schools. LPS had no schools listed as needing improvement in 2019.

Likewise, the number of excellent and great schools within LPS both dropped, with 26 schools classified as good compared to 17 in 2019.

LPS officials, however, have expressed "serious concerns" about both the scores and subsequent classifications, citing changes to the test and the use of old cut scores they say skew the data and make drawing comparisons problematic.

School leaders from Lincoln, Millard, Omaha and other districts wrote to Blomstedt in October requesting changes to the measurement.

The assessment used reading and math cut scores — the score set by the state that separates testers in different proficiency categories — from the old test, according to Leslie Eastman, LPS director of assessment and evaluation.

The stark gaps in proficiency scores in science, reading and math especially call into question the use of old cut scores, Eastman said.

About 66% of LPS students and fifth and eighth grade students statewide were proficient in science, the cut scores for which were set last summer. Those percentages are significantly higher than in reading, for example, which is highly correlated to science proficiency, Eastman said.

"I have some major concerns about the interpretability of these scores," she said.

Setting cut scores is a long process that involves setting standards for the test and drawing input from classroom teachers, which LPS officials say is a  "judgmental" process that can be greatly influenced by what it means to be proficient.

The Nebraska State Board of Education ultimately approves cut scores.

Blomstedt said the state set a "very high bar" for grade-level proficiency and it wanted to keep that bar the same to measure the true extent of the pandemic.

"We didn't want to be in a spot where we were saying artificially that we were somehow better off than we were in the pandemic," Blomstedt said.

Regardless, Blomstedt understands districts will have concerns, adding that the department has tried to work them on those.

"I understand you can get into a lot of technical pieces with the assessment; we'll keep working on that," he said.

The state's classifications of excellent, great, good and needing support are based on a number of factors, including test scores, participation in assessments, the graduation rate, chronic absenteeism and progress toward English language proficiency.

Schools that are deemed to need improvement typically put together a school improvement plan, said Sarah Salem, LPS director of continuous improvement and professional learning. The state uses those ratings to pick its priority schools that need intervention.

Salem, however, cautioned against viewing the rankings as a measure of school quality since it draws from so many factors.

"To say it's a measure of school quality, I think, is unfair to the teachers who are doing amazing things, principals who are putting together effective programs that are making a difference," Salem said.

LPS officials said the district is more focused on using metrics like the district's graduation rate and scores from the MAP Growth test it administers, rather than the state assessment or the subsequent rankings.

"We need accountability so that we can be transparent with the public about what's happening in our schools," Salem said. "We just don't believe this model is a good measure of that."

Some school districts — like Waverly — actually saw their test scores improve, but for the most part schools saw declines, and in some cases significant ones. Omaha Public Schools, for example, saw its math proficiency among elementary and middle school students drop from 30% in 2019 to 20%.

There's a strong correlation between poverty and performance on the tests, and disparities based on race, income and other factors continued. English learners saw the greatest declines, with just 5% testing proficient in reading.

Statewide, just 18% of Black students and 28% of Hispanic students were proficient in math, compared to 56% of white students.

On Wednesday, Linehan talked about the need for adequate special education funding. She also said there needs to be more done to bring teachers up to speed on new developments in how reading is taught.

Linehan also said she "strongly supports" the Department of Education's assessment process as a way for schools to identify what is going wrong and to fix it.

"If you don't know what the problem is, you can't improve," she said.

Ultimately, the dip in scores came as little shock, but efforts by schools to get kids back in the classroom during COVID-19 helped soften the blow, Walz said.

"The test scores were exactly what we expected," Walz said. "But I think that we were very fortunate in the fact that we were able to get our kids back in school sooner than a lot of other schools across the nation, which really helped us."

'Part of the group': A Christmas show for all students hits the stage at Lincoln North Star

North Star's winter musical "Jingle Arrgh the Way" is a first-of-its-kind show at LPS. Special education students from the school's unified club have a role.

Earlier this month, 500 teachers and support staff were trained on how to conduct home visits. It's one tool intended to help curb student misbehavior and increase family engagement.

The firm, one of three finalists that presented to the State Board of Education, will be tasked with helping find a replacement for Matthew Blomstedt, the state's current education commissioner. 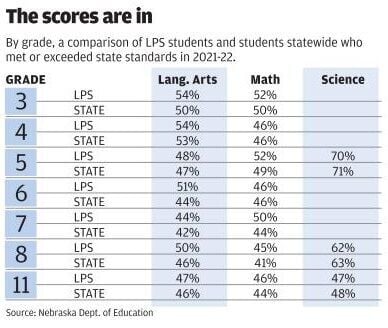 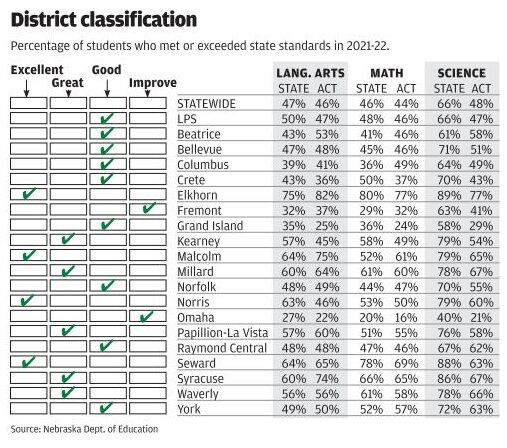