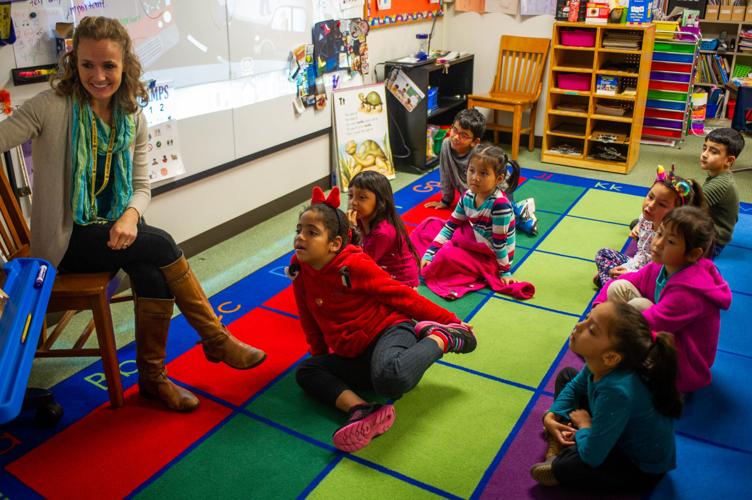 Students listen as Elliott Elementary teacher Kara Hilzer reads a book on Monday. At LPS, the 2,975 English language learners this fall are down by 118 students -- almost 4 percent. 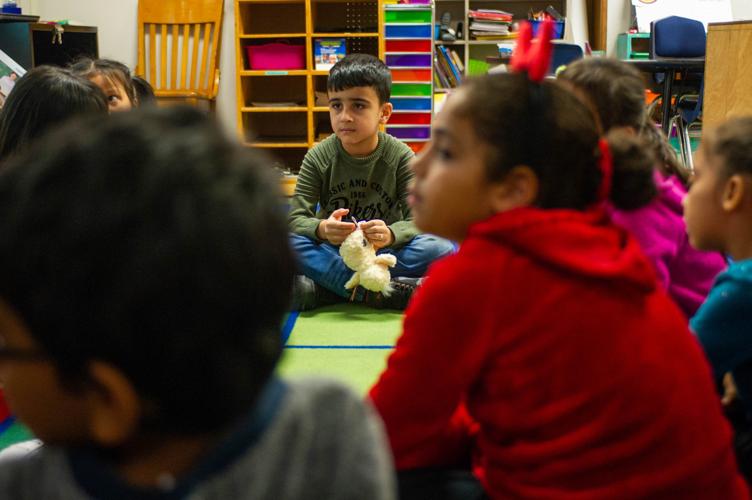 Elliott Elementary first-grader Areen Abdulkareem shares with classmates that he wants to be a pilot. 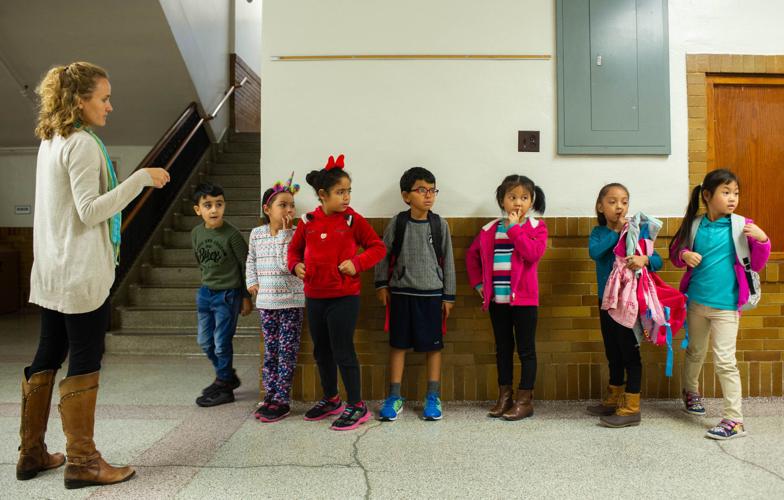 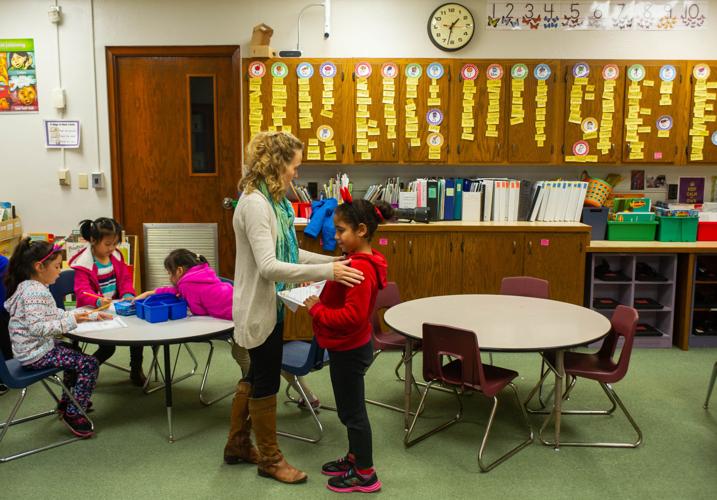 First-grade English language learner student Rukia Elshesheny shows Elliott Elementary School teacher Kara Hilzer her drawing of what she wants to be when she grows up. 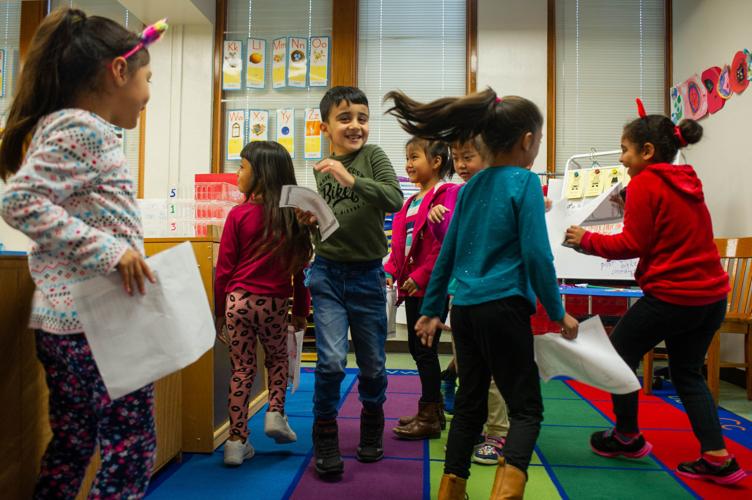 English language learner students comprise about 7 percent of the 42,000 students at LPS.

The number of English language learners at Lincoln Public Schools has dipped for the second year in a row — a decrease officials attribute at least in part to the federal government's scaled-back refugee resettlement program.

“I think that certainly is a factor,” said Linda Hix, LPS director of federal programs. “We don’t have as many families coming in with refugee relocation services, especially in the last part of the last school year.”

President Donald Trump capped the number of refugees — people fleeing violence and persecution — that can be resettled in the United States at 45,000 for 2018, and at 30,000 for the coming year. That's the lowest ceiling a president has placed on the program since its creation in 1980.

And the cap — one of several changes the administration has made to clamp down on immigration — has dramatically reduced the number of people being resettled in Nebraska.

During the 2016 fiscal year, Lutheran Family Services — one of three resettlement agencies in Lincoln — resettled 367 people, and in fiscal year 2017, resettlements grew to 386.

But the organization resettled just 70 in the fiscal year that just ended, according to Todd Reckling, program vice president.

But Hix cautioned that ELL numbers constantly fluctuate, influenced by a number of factors.

For instance, what’s happening around the world can have a big impact.

The decrease over the past two years, for instance, is much smaller than the increase three years ago, when the number of ELL students jumped nearly 33 percent.

And there are still more ELL students today than there were five years ago.

The increase in 2016, Hix said, was largely because of two events occurring halfway across the world: refugee camps in Thailand were allowing resettlement; and the civil war in Iraq, which resulted in a large influx of Yazidi families and those who’d worked for the U.S. Army as translators.

Also, Hix said, the ELL program continues to get students from families moving to Nebraska from other states, and as younger children of families already living in Lincoln reach school age.

“That is still happening a lot,” Hix said.

LPS employs more than 120 ELL teachers, including seven it added this year, Hix said. The district staffs conservatively, she said, because the numbers are so unpredictable.

“We have been in catch-up mode for several years,” she said. “This year I feel like we’re in a fully-staffed position. We probably wouldn’t have been if the numbers had continued to grow.”

ELL students comprise about 7 percent of the 42,000 students at LPS, so the smaller-than-anticipated increase in overall enrollment was probably not largely affected by the ELL numbers.

In addition to ELL teachers, LPS has 23 bilingual liaisons who work with students and their families, who come from more than 150 countries and speak 130 languages. The most common languages among ELL students include Spanish, Arabic, Kurdish, Karen, Russian, Ukrainian and Nuer.

At Elliott — one of eight elementary schools with more than 100 ELL students — Kara Hilzer’s first-grade class of students in the middle two levels of proficiency include three U.S.-born students who speak Spanish and those from Egypt, Thailand and Iraq. She's had some of their older siblings in class.

The class of nine students — learning about jobs in their community this week — is slightly smaller than last year, and overall, Elliott’s numbers are down slightly. But class size — as well as staffing — depends on many factors, including the age and proficiency level of students, said Principal Kathleen Dering.

That means Hilzer’s classrooms look different every year — regardless of what’s happening in Washington.

“There’s no such thing as typical,” she said.

Iggy Malik’s sister figured her kid brother would suggest naming a Lincoln Children’s Zoo giraffe after himself, but she was wrong.

Along a winding path at the Lincoln Children’s Zoo, just north of the Safari Café near the flamingos and the bronze bears, sits a crocodile.

The number of students walking the halls of Lincoln’s public schools topped 42,000 for the first time this fall, though the growth is smaller …

OMAHA — Police say a male student stabbed a female student, then himself, at a high school in Omaha.

COUNCIL BLUFFS, Iowa — President Donald Trump came to America's heartland Tuesday to lay out his plans for the future of ethanol.

Sydney Jensen has an old record player in her classroom, inspiration from her childhood, like her grandparents, who taught science and history…

When the Crusaders play their last home game of the season on the Lincoln Christian football field Friday, the American flag will be painted a…

Students listen as Elliott Elementary teacher Kara Hilzer reads a book on Monday. At LPS, the 2,975 English language learners this fall are down by 118 students -- almost 4 percent.

Elliott Elementary first-grader Areen Abdulkareem shares with classmates that he wants to be a pilot.

First-grade English language learner student Rukia Elshesheny shows Elliott Elementary School teacher Kara Hilzer her drawing of what she wants to be when she grows up.

English language learner students comprise about 7 percent of the 42,000 students at LPS.