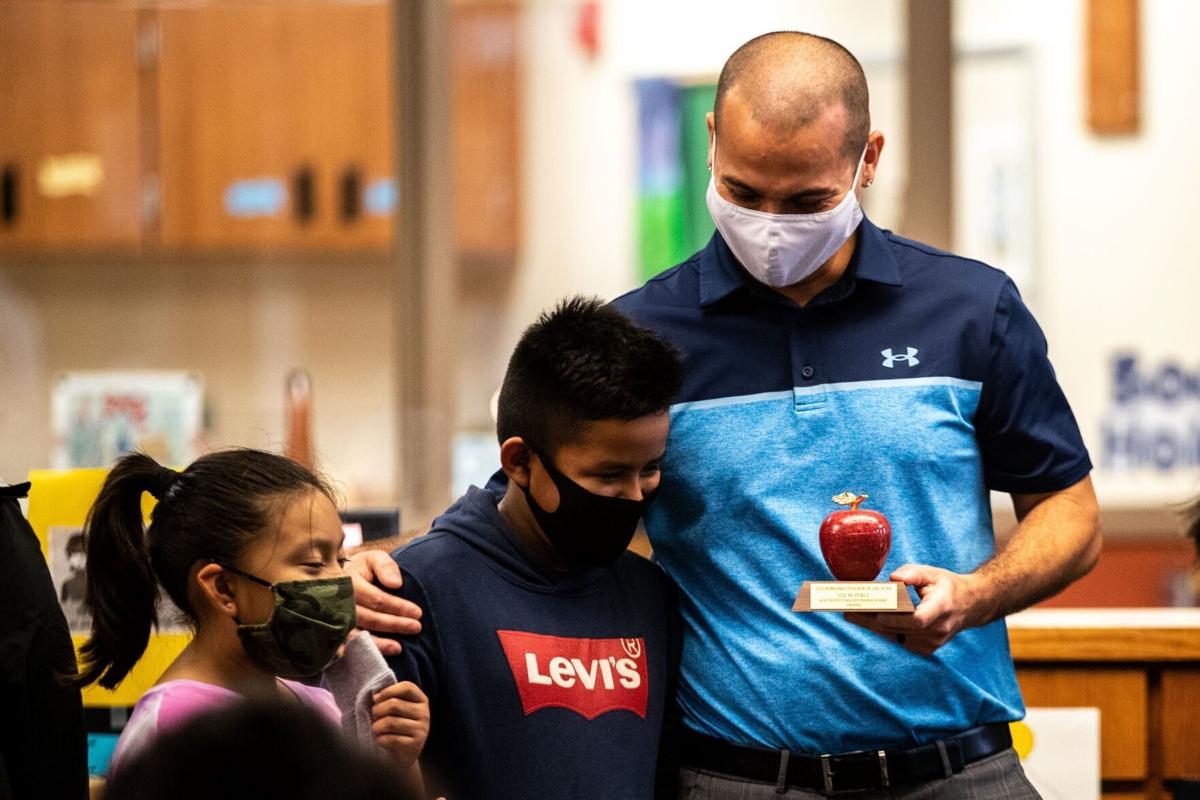 Lee Perez, an ESL teacher, embraces a student as he accepts the Nebraska 2022 Teacher of the Year award at Alice Buffett Magnet Middle School on Wednesday. 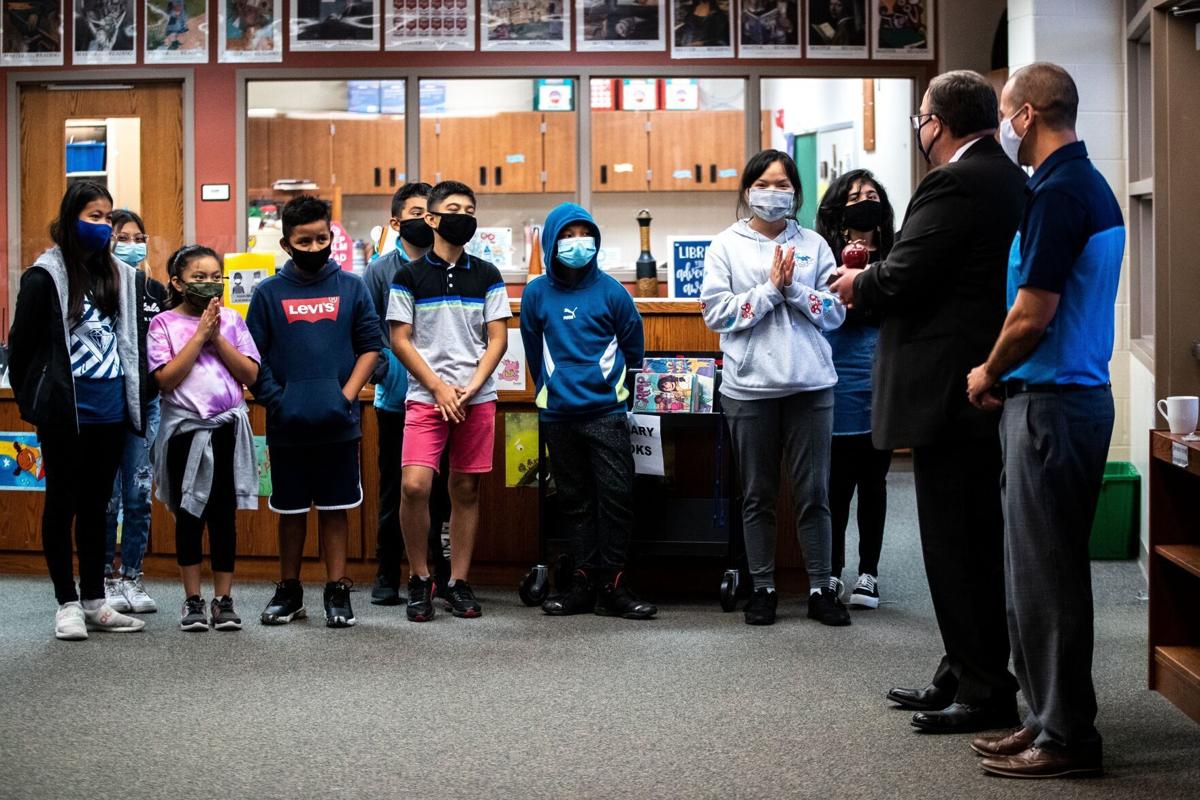 Students of Lee Perez, right, an English as a Second Language teacher, cheer as he accepts the Nebraska 2022 Teacher of the Year award at Alice Buffett Magnet Middle School on Wednesday.

Perez, a teacher for 13 years, is an ESL teacher at Buffett, which is in the Omaha Public Schools in northwest Omaha.

Perez said that as he works to teach his students a new language, he also celebrates their backgrounds and cultures in the classroom, according to a news release from the Nebraska Department of Education.

Perez said in his application for the award: "It is important to embrace diversity. We should acknowledge that being different is special and these differences should be showcased during learning."

Perez said his message to other teachers is to be "kind, culturally aware and tolerant and that kindness should be our new pandemic."

Perez earned a bachelor's degree in secondary education from the University of Nebraska at Omaha.

A panel of Nebraska educators chose Perez for the honor.

Once in peril, student newspaper at Doane University gets funding lifeline

The Nebraska Association of School Boards and Gov. Pete Ricketts said threats and acts of violence against school officials should be dealt with by local law enforcement, not the federal government.

Students can join the prep program as freshmen and complete the program throughout the course of their four years at UNL or join with just two semesters left.

SCC to seek $26.5M in bonds for dorm at Lincoln campus

With the board's approval, SCC will secure financing later this year as it aims to build the first 250-bed dormitory in Lincoln, long a commuter campus.

“Our staff are just burning the candle at both ends and taking care of each other. We would like to honor the need for mental health for staff and students so we were asking for the 22nd and 23rd” of November off.

UNL to hire new executive vice chancellor from within

UNL will work quickly to fill the position in time for the spring semester, Chancellor Ronnie Green said, forgoing a national search that could last months.

A panel of three speakers argued against masks and vaccines for religious exemptions in front of roughly 200 people, most of whom were unmasked -- in defiance of both UNL and Lincoln-Lancaster County Health Department directives.

Lee Perez, an ESL teacher, embraces a student as he accepts the Nebraska 2022 Teacher of the Year award at Alice Buffett Magnet Middle School on Wednesday.

Students of Lee Perez, right, an English as a Second Language teacher, cheer as he accepts the Nebraska 2022 Teacher of the Year award at Alice Buffett Magnet Middle School on Wednesday. 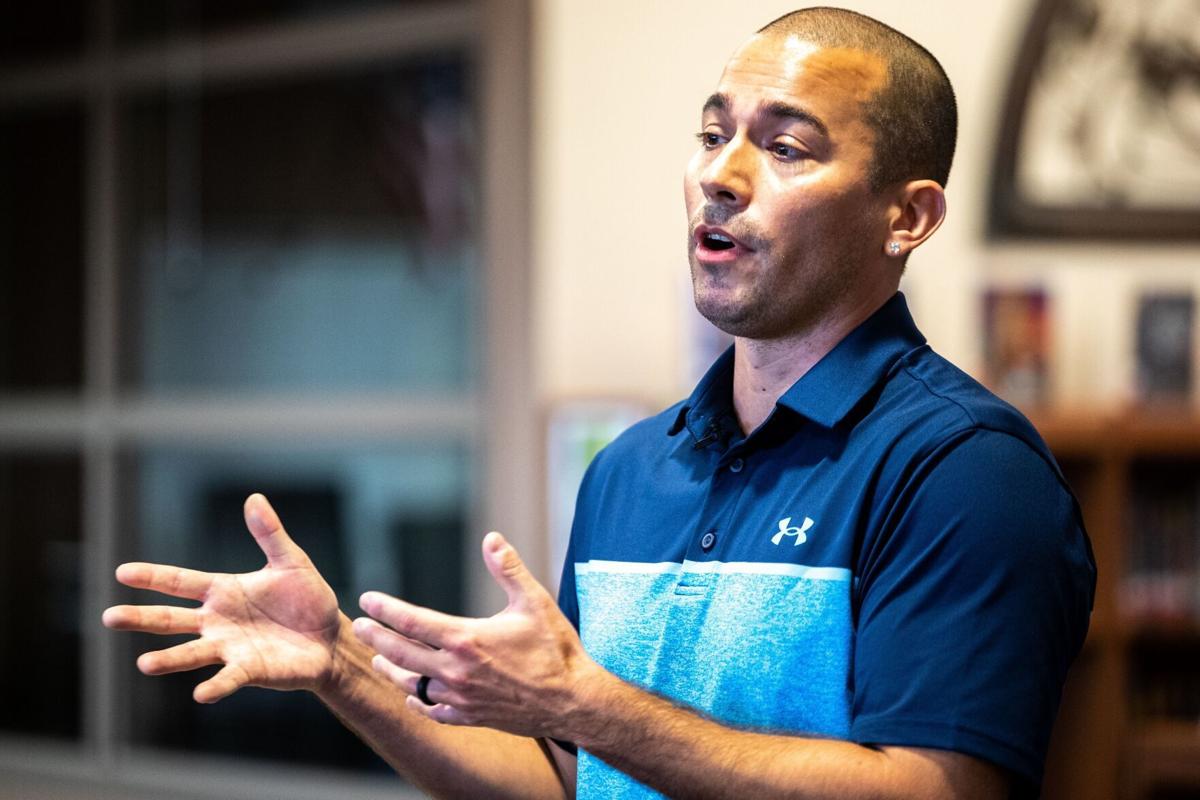 Lee Perez, an English as a Second Language teacher, speaks to reporters after accepting the Nebraska 2022 Teacher of the Year award at Alice Buffett Magnet Middle School on Wednesday.