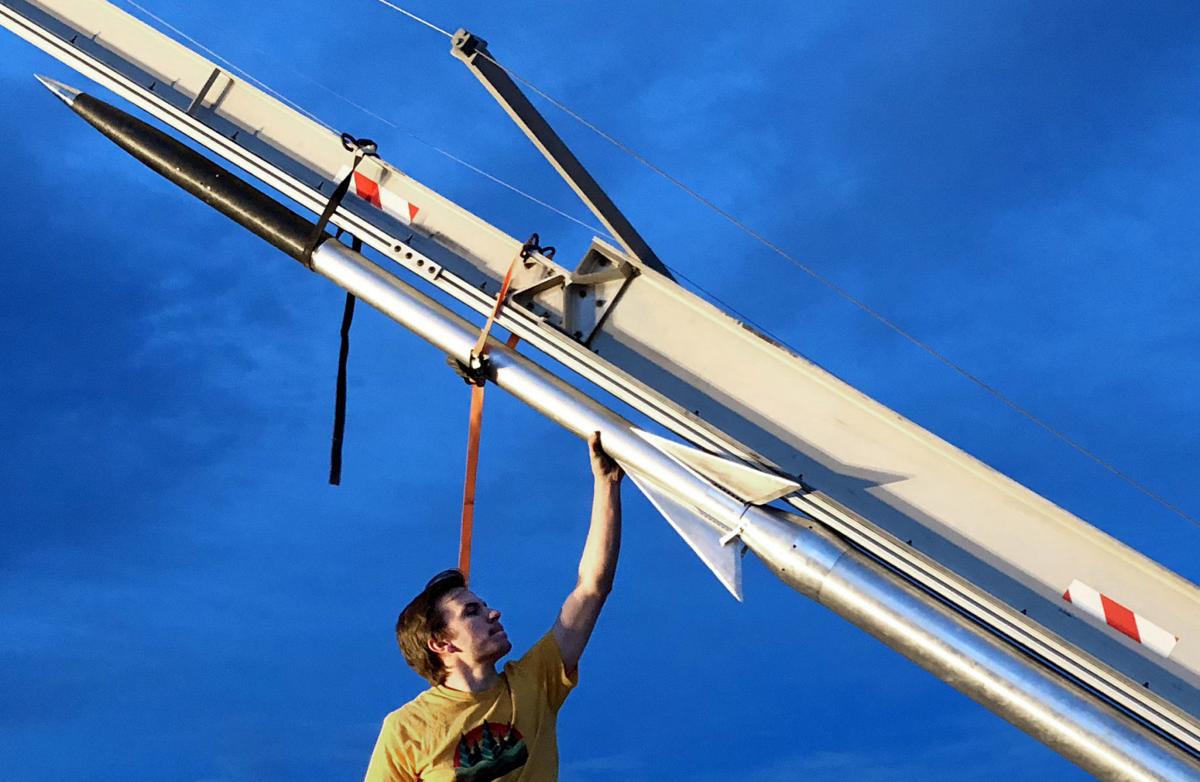 Beatrice native Nathan Spilker steadies the rocket’s second stage on a rail. The Princeton University junior was part of Operation Space, a group of college students from across the country that worked to launch rockets this spring. 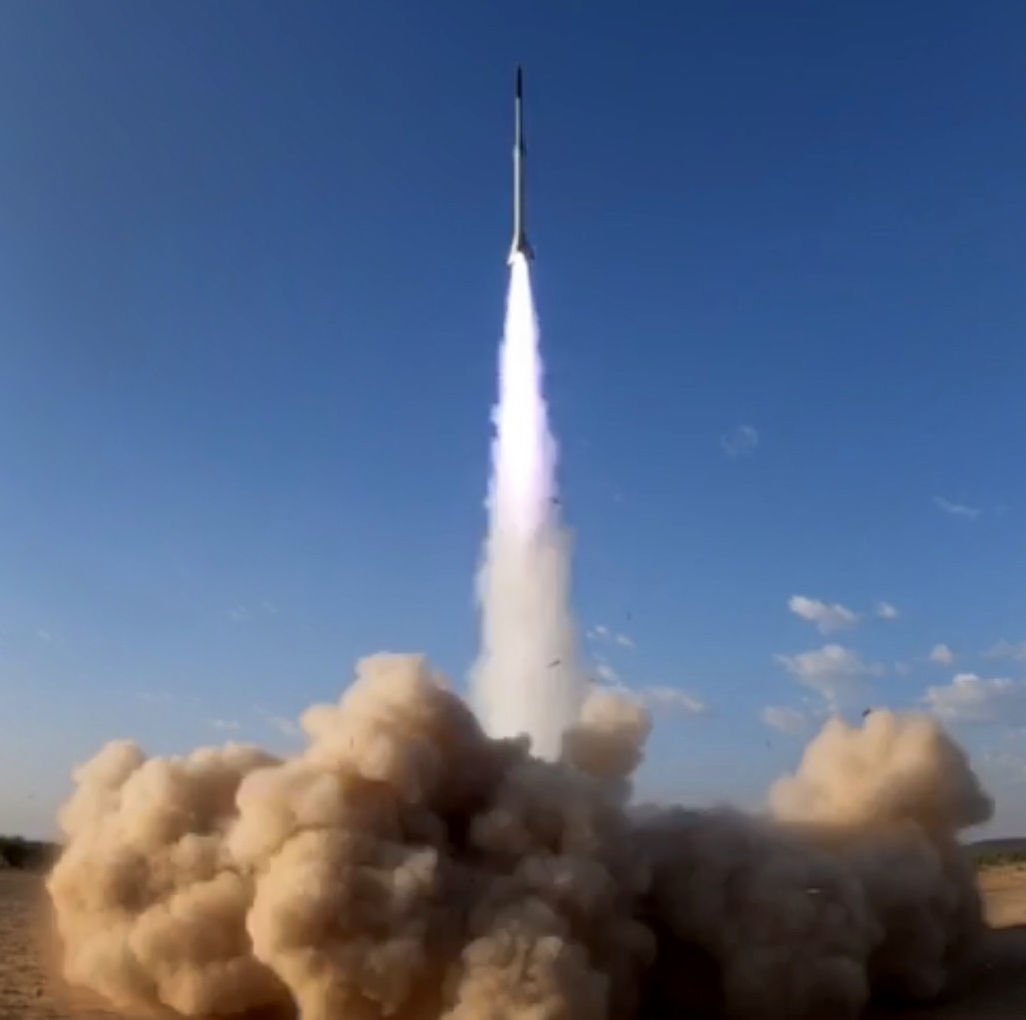 Nathan Spilker knew he wanted to be an engineer when he was a second grader. But the Beatrice farm kid never imagined he’d be part of a team trying to launch a rocket into space after his second year of college.

But that’s just what he was doing last week when Operation Space, a group of college students from around the world, took the rockets they had spent months engineering and building to New Mexico’s Spaceport America.

“The idea was to send a rocket into space,” Spilker said. “That’s kind of an arbitrary statement. There is no hard boundary for space. There’s an arbitrary line that’s found at 100 kilometers called the Karman Line. That’s kind of internationally recognized (as the edge of space). That line was what we were trying to reach.”

Spilker, 19, is a 2017 Beatrice High graduate and a junior at Princeton University, where he’s majoring in aerospace engineering and engineering physics. He got involved with Operation Space through a Princeton rocketry club.

Last summer, that club got a pitch from Duke University’s Joshua Farahzad, who came up with the idea for students, not associated with any single university, to design, build and launch a rocket into space.

About 50 students from more than 25 universities across the U.S. and Canada joined Operation Space.

The students were divided into teams — business, avionics, simulations, ignition and structures. Spilker was part of the latter, working on the link between the two stages of the rocket and making sure the rocket was fully modeled so experiments could be run on the structure.

Those experiments were important, Spilker said, to make sure the project was completed. Each of the rockets cost $20,000 — about one-fifth of the overall $100,000 budget that was raised through sponsorships. Computer modeling and experimentation allowed the rockets to be tested without being repeatedly fired, which the students couldn’t have afforded.

“It’s very hard to coordinate building something as complicated as a rocket across campuses,” Spilker said. “Communication, in some ways, was a lot harder than the engineering aspects of it.”

Most of that communication happened online between students who hadn't met, using messages, texts and video conferences, along with a few phone calls.

Operation Space took the rockets to the federally licensed, 18,000-acre launch complex next to the U.S. Army’s White Sands Missile Range last week, launching one May 31 and the second June 1.

“Our first rocket went to 100,000 feet,” Spilker said. “We encountered some problems after the second stage ignited. We had a nice first-stage burn and ignition of the second stage. Then we had a problem with the payload. We think the nose cone might have come off.

No more projects are planned for Operation Space. But Spilker said the students became a pretty tight group over the past year and are likely to work together again on similar projects, either in rocketry or software engineering.

The Operation Space experience, Spilker said, could be life-changing for him, taking his career in a direction he hadn’t anticipated when he signed up for the project.

“I have been more fascinated by physics and quantum mechanics in the engineering,” he said. “This experience showed me how cool building a physical rocket can be and the payoff for it. ... I’d like to work for NASA or a private rocket group.

“I’m absolutely fascinated with space. All this talk about the Mars mission, maybe some moon missions, has captured my imagination. I would like to work on some of those projects after graduation.”

'Who was Reuben?' — The day the chimps escaped in Nebraska, the book that followed

They were rolling down Highway 20 in the late summer of 2009, returning to his girlfriend’s house in Plainview after exploring Antelope and Pi…

If you had driven past Shane Bristol's farm south of York earlier this month, you might have seen a construction yellow-colored tractor with a…

Women in Nebraska are paid 77 cents for every dollar earned by a man, which is below the national average of 80 cents per dollar, according to…

BEATRICE -- The new owners of Risky's Sports Bar in Beatrice have big changes in mind, including a new name and the addition of a brewery.

Presented with a choice not long ago — go on vacation or stay in town to attend a weeklong writing workshop — Lily Abele did not hesitate.

For the first time in its 152-year history, the Nebraska State College System on Tuesday set tuition rates for two years, a move administrator…

Beatrice native Nathan Spilker steadies the rocket’s second stage on a rail. The Princeton University junior was part of Operation Space, a group of college students from across the country that worked to launch rockets this spring.