Blair Neth showed off a fraction of his superbike stable for a Journal Star story last year. Neth died in September after a crash at 10th and Arapahoe streets. 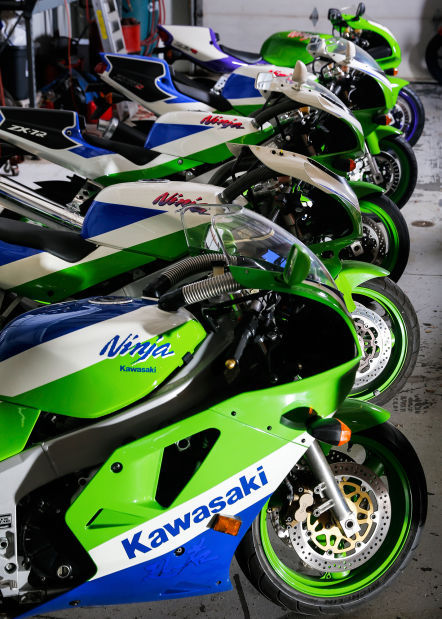 Blair Neth has collected and restored every generation of Kawasaki's ZX7 Ninja, representing 1990 to 1998. 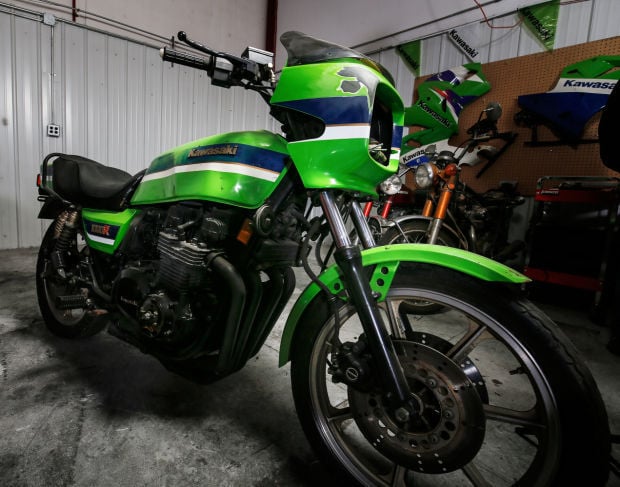 Blair Neth is searching the world for original parts to rebuild his 1983 Kawasaki KZ1000R. 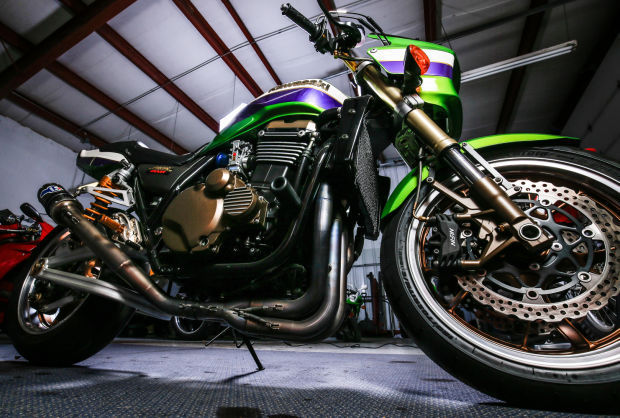 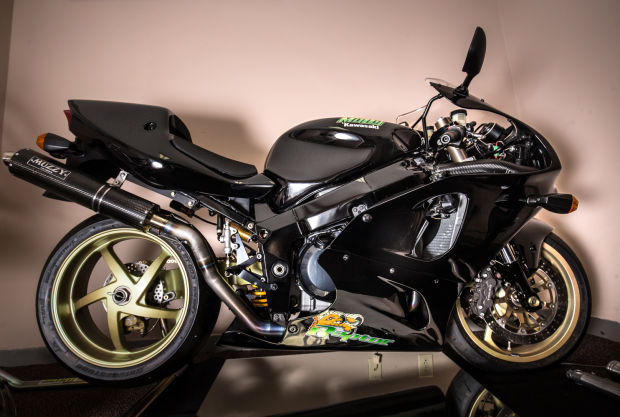 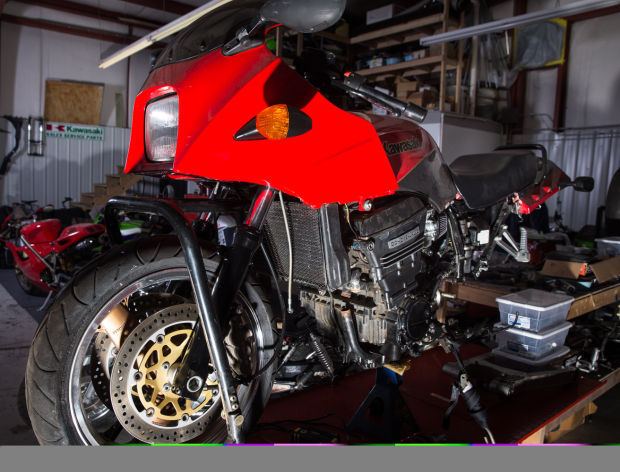 As a teen, Blair Neth dreamed about this bike -- a Kawasaki GPZ900R Ninja.

This addiction has taken a toll on his body, sending him to the hospital for more than nine weeks.

And it’s drained paycheck after paycheck. But no, Blair Neth won’t tell you how much he’s spent since that first time, except to put it somewhere in the six figures.

It’s dragged him across the country, luring him to Kentucky and Texas and California and a half-dozen other states.

It’s tangled him up with the law more than a dozen times.

Neth looks around his shop at dozens of 1980s and 1990s motorcycles, most of them Kawasakis but a few Suzukis, some of them in showroom condition but some still in pieces, almost all of them built to go fast.

“I don’t know what the goal is," the 45-year-old said. "I’m just collecting all the bikes I lusted in my youth.”

His parents made it clear. Even as he pored over Cycle World and longed for his dream bike -- an ’84 Kawasaki 900 Ninja -- he knew they’d never let him have one.

His folks were cool with dirt bikes, though, and Neth spent his early teens running a Honda 100 around and around the paths near their acreage between Waverly and Davey.

He’d bought that little Honda with his own money when he was 13 or 14.

“I didn’t know what to look for and I wasn’t very outgoing at the time and I just wanted to buy it and get out of there,” he said.

He blew the motor his first ride. And of all of the bikes he’s owned since, about 45 so far, it stands out as the biggest pile of junk.

He still owns it.

And then Neth got his driver’s license, and a '68 Oldsmobile, and he stopped thinking so much about motorcycles.

His dad ran a body shop, and Neth had learned enough there to land a part-time job at Speidell Body Works when he started college at Wesleyan in 1990.

He majored in scientific and medical illustration. He’d always been an artist, sketching Saturn V rockets as a first-grader. But he had no interest in abstract art, in anything embellished.

Same with his bodywork: It must be factory-accurate, nothing custom or self-serving about it. He needs to restore the sheet metal, paint and fiberglass to the way it was when it was new.

“It’s just an extension of my need to have something correct," Neth said. "And that’s why my artwork, it’s got to be correct. I don’t do impression. I don’t do modern. It’s got to be dead on.”

He got it running again, and it was fast, and it scared him, and that would become important.

He was 26 when he finally got his first superbike. A friend’s father needed an axle for an old Cutlass, and Neth had one from a Buick that would work.

In return, he got a box of parts that used to be an ’84 Ninja, the bike he’d always wanted. He spent more than 100 hours reassembling it, replacing parts, restoring the body, redoing the paint.

He was still living at home, so he didn’t tell his parents. He stored it in town.

“It would do a legit 155 miles per hour," he said. "I was beating bikes I probably shouldn’t have been.”

Still, his dream bike disappointed him. It wasn’t fast enough. It didn’t frighten him.

“I’d owned dirt bikes before that, and they scared me. And I was looking for the street version of that.”

He’s been looking ever since.

He quit Wesleyan just shy of his degree, he said. He got a full-time job at Russwood Chrysler and later returned to Speidell, eventually working his way up to manager.

He’d chased down his second street bike, a 1982 Suzuki GPZ550, when he saw someone riding it on Nebraska 2.

“I was in my car and I did a 180 at the intersection and caught up to him and asked him if he’d want to sell it,” he said.

About a year after he bought it, Neth rode a wheelie so long -- maybe a half-mile -- he starved the engine for oil and blew it up on O Street.

He’s raced his bikes, legally on the track and illegally on the street. He’s been pulled over, lost points and lost his license more than once.

He’s crashed, too. He was toying with other riders around Interstate 180 in 2003 -- letting them pull ahead before reeling them in -- when he flew off the road near Fletcher Avenue. The crash put him in the hospital for more than two months while doctors replaced his hip and healed his shattered pelvis and broken femur.

A year later, a friend riding a wheelie closed too fast on Neth and took him out like a bowling pin, sending him sliding 330 feet and back to the hospital.

“You know, that scares a mom to death,” Beverlye Neth said. “I pray a lot for his safety.”

As her son was recovering from his last accident, she told him: You get to lie down here, but we have to sit by your side.

The jewels of his collection are his Kawasaki ZX7s -- high-end Ninjas -- one from every generation.

“It was a very purpose-built machine," Neth said. "It was built for a specific racing series, superbike racing. And I knew some of the models that it would take to complete my collection would be very hard to find.”

When Neth thought he’d bought his last, the ’96, the seller suggested he wasn’t done.

“The gentleman told me, ‘Blair, what you should do now is get a Muzzy Raptor and your collection will be complete.’”

This was a ZX7R put on magnesium steroids by noted builder Rob Muzzy, souped up and tricked out, like a Shelby Mustang. There were fewer than 50 built, and only 13 known survivors.

He found one online, but the ad was archived, more than a year old.

They talked on the phone for several weeks, the owner sending photos. It was in rough shape, but the seller had the original and rare body parts. Neth brought it home from Chicago and spent a month taking it apart and building it back up.

It’s the only bike he parks in his shop’s carpeted office.

Or to search the country for original parts to restore an ’83 Kawasaki KZ1000R Eddie Lawson Replica. He once tried to buy a real and rare Eddie Lawson, but stopped his bidding at $84,000, he said.

“I don’t have a big house," he said. "I’m pretty miserly on most things in my life. I don’t borrow money to buy these bikes."

But he does work extra hours. On top of his day job at Speidell, he started a specialty car and motorcycle repair shop, Neth Lab Inc., three years ago.

When he’s not working on other people’s bikes, he’s restoring his own. He likes the work. It appeals to him as an artist.

“It can combine sculpture and mechanics, all in one,” he said.

It's his retirement, too. He’s collecting these motorcycles because they’re a link to his past -- the bikes he always wanted -- but they could also fuel his future. They’re getting harder to find, he said, and their values are climbing.

“These things not only look cool," he said, "but they’ll be one hell of an investment.”

His mother took his father’s name to her grave, but Dieter Jan Volland found it on a piece of paper.

Crash victim Neth loved motorcycles, but people were his passion

When the phone rang at 4 a.m. Saturday morning, Beveryle Neth knew something happened to her son.

Blair Neth of Lincoln has collected dozens of motorcycles, most of the superbikes from the 1980s and 1990s.

Sixth-grader Sam Miles turned the wrong way on his way to school the second day of classes last fall.

Cindy Lange-Kubick: Miles of Tootsie Rolls to go before he sleeps

Tyler York has been collecting and connecting Tootsie Roll wrappers for nearly five years, working toward a Guinness World Record.

The summer of '72, a near drowning, a memory he can't shake

He’s forgotten many details, but John Nickle does remember the moment in 1972 when he kicked off his boots and jumped in the water. And he hopes at least one other person -- the woman who jumped in beside him -- remembers it, too.

“I couldn’t believe it right away,” Lincoln's Lawrence de Villiers said. “I told my wife, ‘Look, this is Charb, this is the guy I did the TV show with.’” Charb -- Stéphane Charbonnier – was one of a dozen people killed when gunmen opened fire at the offices of Charlie Hebdo, a Paris-based satirical magazine. Charbonnier was its editor and one of its cartoonists.

The car guys from the Berean Church were gathered a decade ago, planning their first show, when the motorcyclist among them objected.

‘The best, most interesting things’ — Longtime Lincoln Christmas collector finally selling some of his pieces

The first time Don Wesely climbed the dusty staircase in the old apartment building south of the Capitol, he wasn’t ready for the grandeur tha…

Blair Neth showed off a fraction of his superbike stable for a Journal Star story last year. Neth died in September after a crash at 10th and Arapahoe streets.

Blair Neth has collected and restored every generation of Kawasaki's ZX7 Ninja, representing 1990 to 1998.

Blair Neth is searching the world for original parts to rebuild his 1983 Kawasaki KZ1000R.

As a teen, Blair Neth dreamed about this bike -- a Kawasaki GPZ900R Ninja.