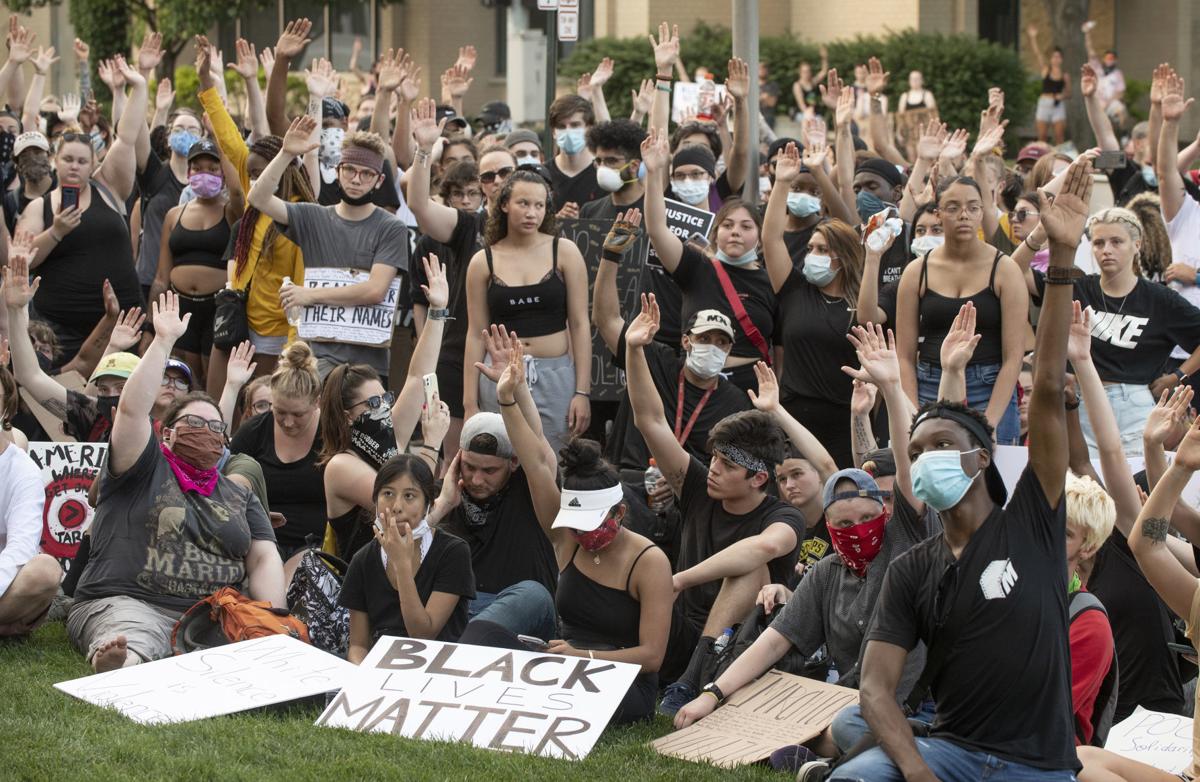 Hands are raised Tuesday at the County-City Building when protesters are asked who is eligible to vote in the election this fall. 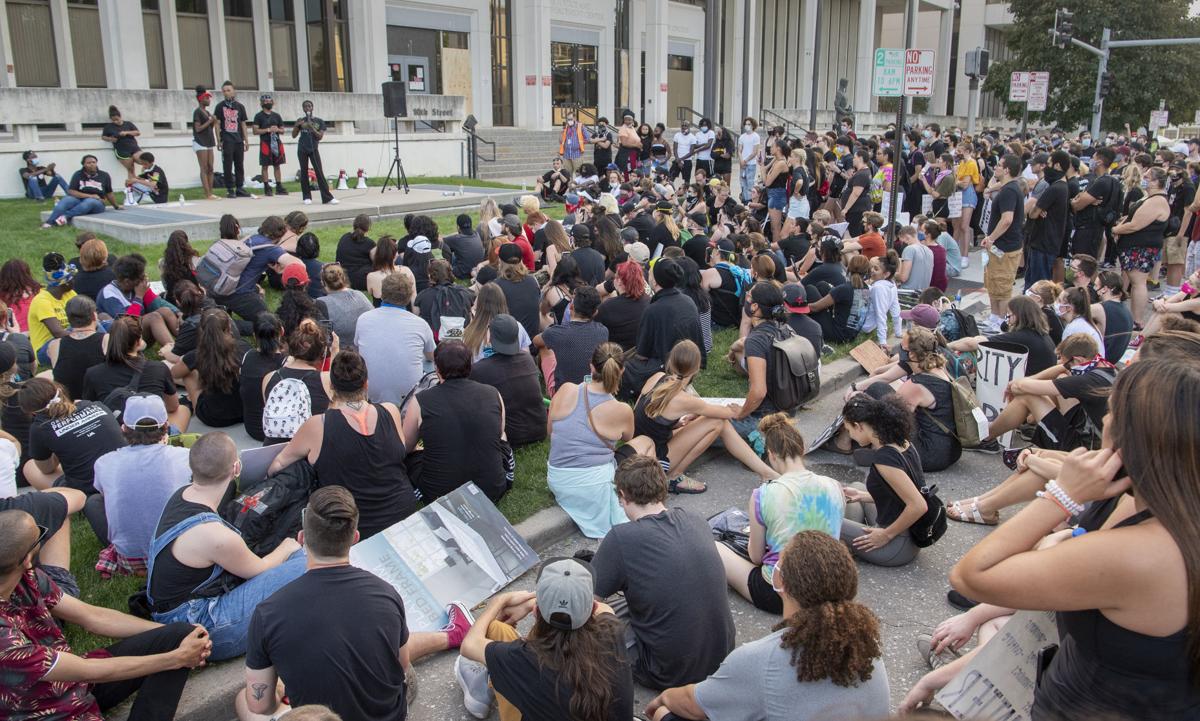 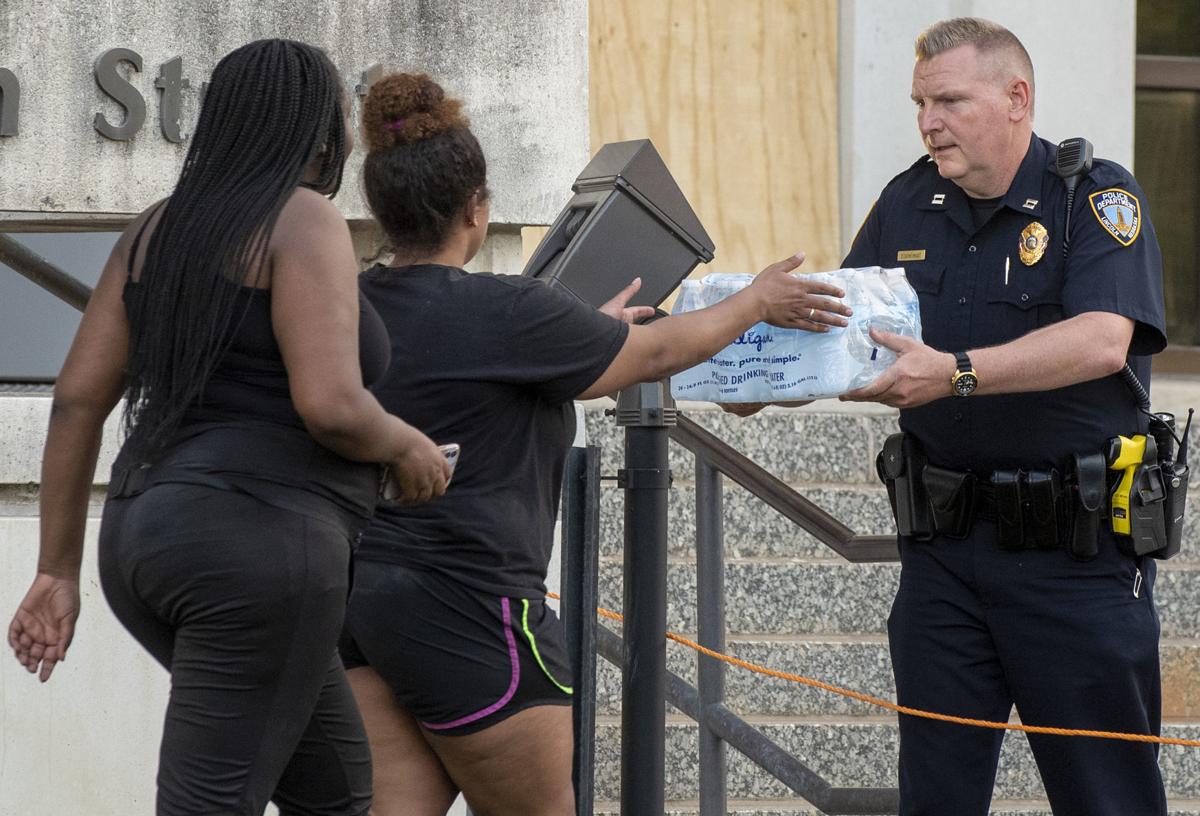 With temps in the high 80s at the start of the gathering, Lincoln Police Capt. Don Scheinost hands off water to protesters at the County-City Building on Tuesday. 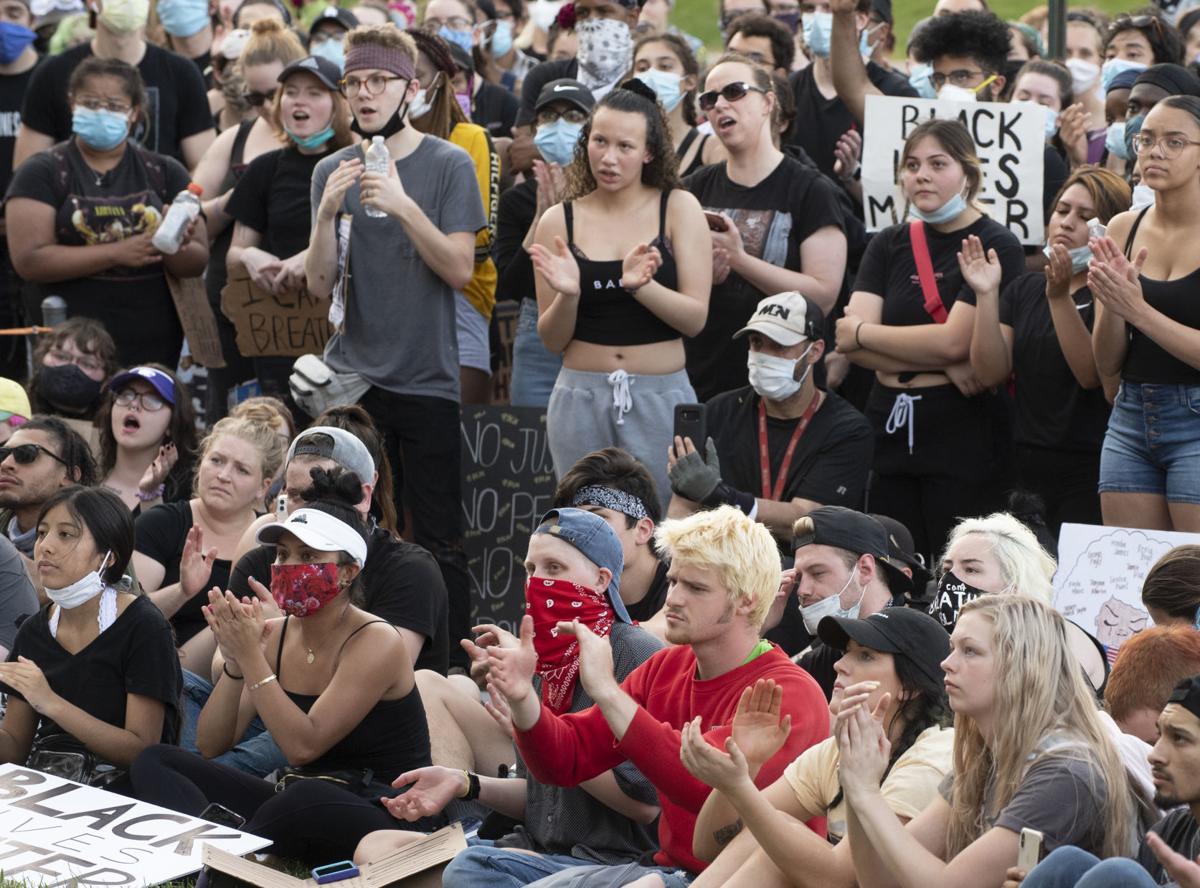 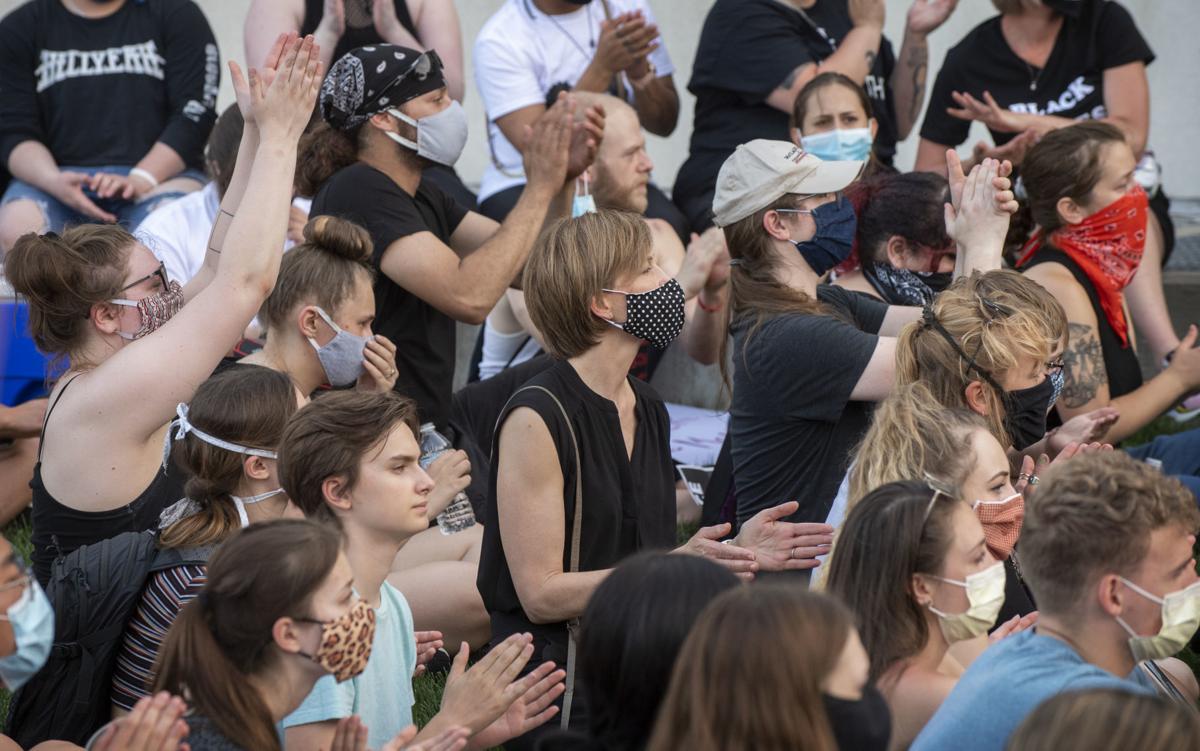 Lincoln Mayor Leirion Gaylor Baird (center) sits with the protesters at the County-City Building on Tuesday.

A fifth night of protests began in Lincoln with speeches and demonstrations outside the state Capitol before protesters took their message on the march.

Not even the 96-degree heat could stop the momentum generated from Monday night's emotional rally that culminated with a Nebraska State Patrol trooper kneeling with the group.

"The sun ain't gonna stop me from what I feel is right," said Dario Rossin, one of the protest organizers. Rossin said Monday night felt like a small symbol of what the group wants to see — kneeling with cops.

Several hundred people took part in another peaceful protest Tuesday. They wrapped around the Capitol and snaked through neighborhoods before heading to the County-City Building, where they met up with attendees of another rally.

Tuesday's message encouraged people to vote for the change they wished to see and keep fighting the good fight.

They did not face a curfew, as Mayor Leirion Gaylor Baird chose not to enact one for Tuesday night.

She said the purpose of curfews the previous two nights was not to arrest protesters, but instead to ensure public safety across the city.

The curfews followed weekend assemblies that started peacefully, then stretched into the night and ended in injuries, destruction of property and arrests.

Serious thought has gone into how the Lincoln Police Department and other law enforcement officers have been employed, Gaylor Baird said during a news conference Tuesday afternoon.

On Monday, LPD blocked off 10th Street to allow for a protest outside the County-City Building and to ensure protesters' safety, she said. Officers also blocked off Lincoln Mall to allow the thousands of protesters to march to the Capitol even though the rally lasted past the 9 p.m. curfew.

Monday's protest ended peacefully at about 10:30 p.m. after a State Patrol trooper knelt with protesters on the steps of the Capitol for nine minutes. The solemn moment marked the amount of time a Minneapolis police officer knelt on George Floyd's neck before the black man's death.

Later Monday, at least 30 people were arrested for violating the curfew. According to court records, Lincoln police arrested most of them, 27 people, after seeing a group throwing rocks at the Target at 333 N. 48th St.

In an affidavit for those arrests, Capt. Chris Peterson said people ran when officers arrived but were contacted shortly after the incident near the Target and arrested. One had a concealed weapon and another 4.7 grams of marijuana, Peterson said.

Gaylor Baird admitted the protests are a challenge for the police department, which has a low number of officers per capita. The Lancaster County Sheriff's Office and Nebraska National Guard have assisted with the efforts.

"I think we're all looking forward to what comes next," she said regarding the duration of the protest, pointing to community conversations with law enforcement about how to improve.

In Omaha, which still had a curfew in place Tuesday, the American Civil Liberties Union of Nebraska urged officials to reject extending the city’s current state of emergency unless Mayor Jean Stothert commits to ending a ban on groups of more than 25 people.

At 3:30 p.m., Lincoln Mayor Leirion Gaylor Baird will update the public regarding protests and the coronavirus situation.

23-year-old man sentenced for threat, firing shots before fatal shooting in Hebron in 2018

Video evidence showed 30 to 40 vandals inside the building for at least 45 minutes, and likely longer.

Sections of Sun Valley Boulevard, Arbor Road and South Street will close at 8 a.m. Monday for various repairs, according to the Lincoln Transp…

Officials said they plan to test all National Guard personnel who have been on duty assisting police in Lincoln and Omaha.

During a Zoom listening session with the mayor, police chief and a city councilwoman, Lincoln residents talked about school resource officers, whether the city should pay for the medical bills of injured protesters, external investigations into the police department and removing the police substation at the F Street Community Center.

Hands are raised Tuesday at the County-City Building when protesters are asked who is eligible to vote in the election this fall.

With temps in the high 80s at the start of the gathering, Lincoln Police Capt. Don Scheinost hands off water to protesters at the County-City Building on Tuesday.

Lincoln Mayor Leirion Gaylor Baird (center) sits with the protesters at the County-City Building on Tuesday.