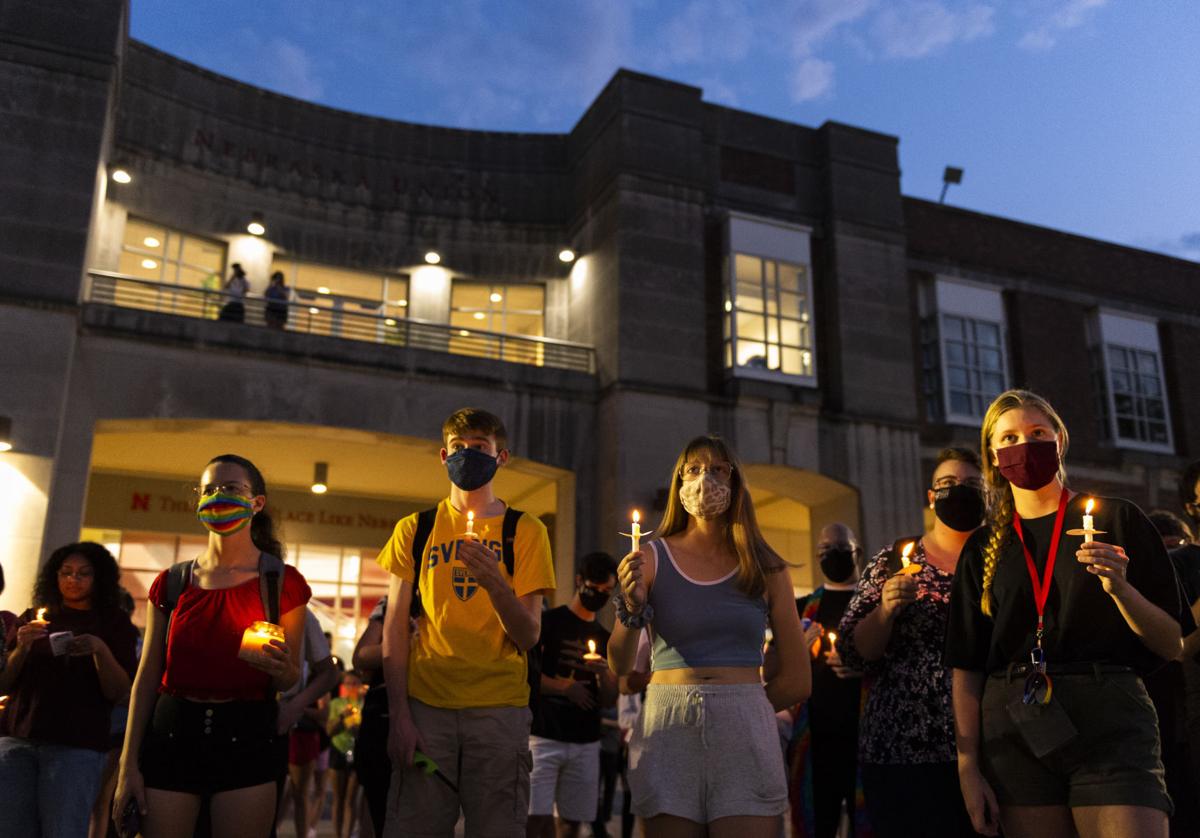 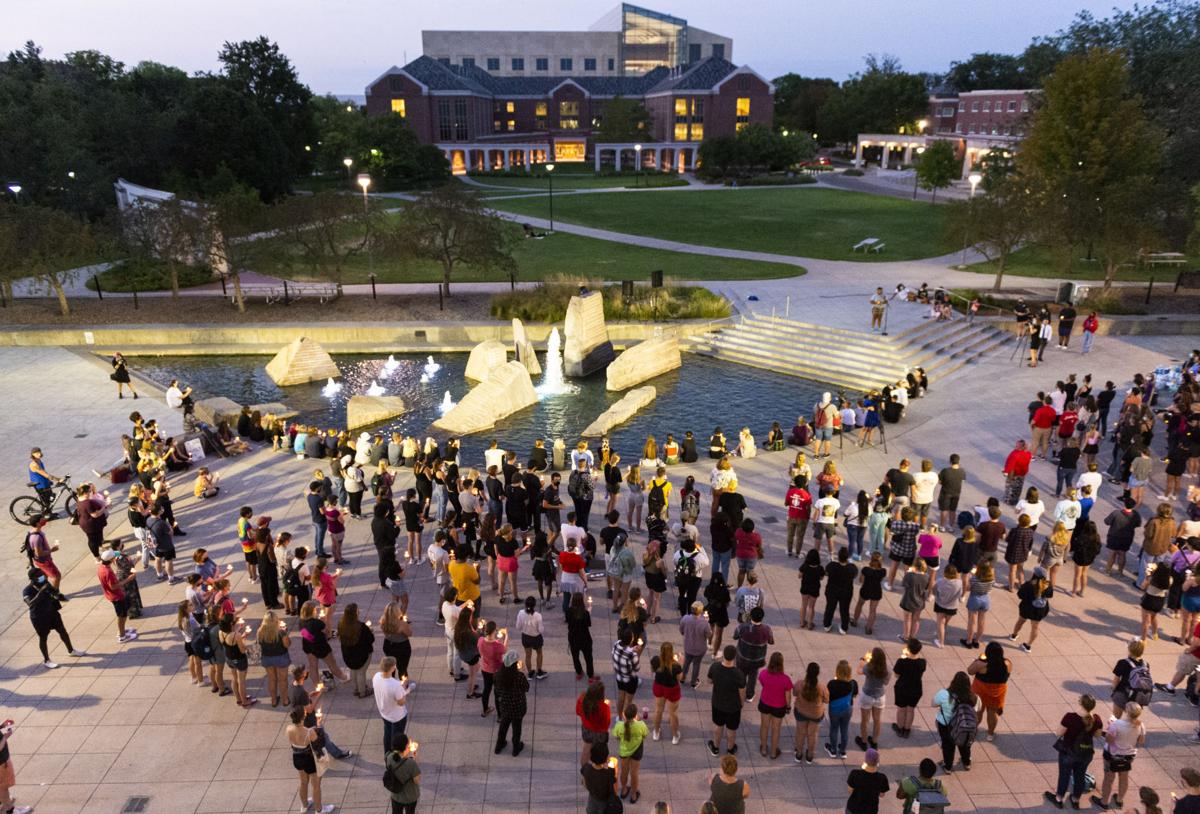 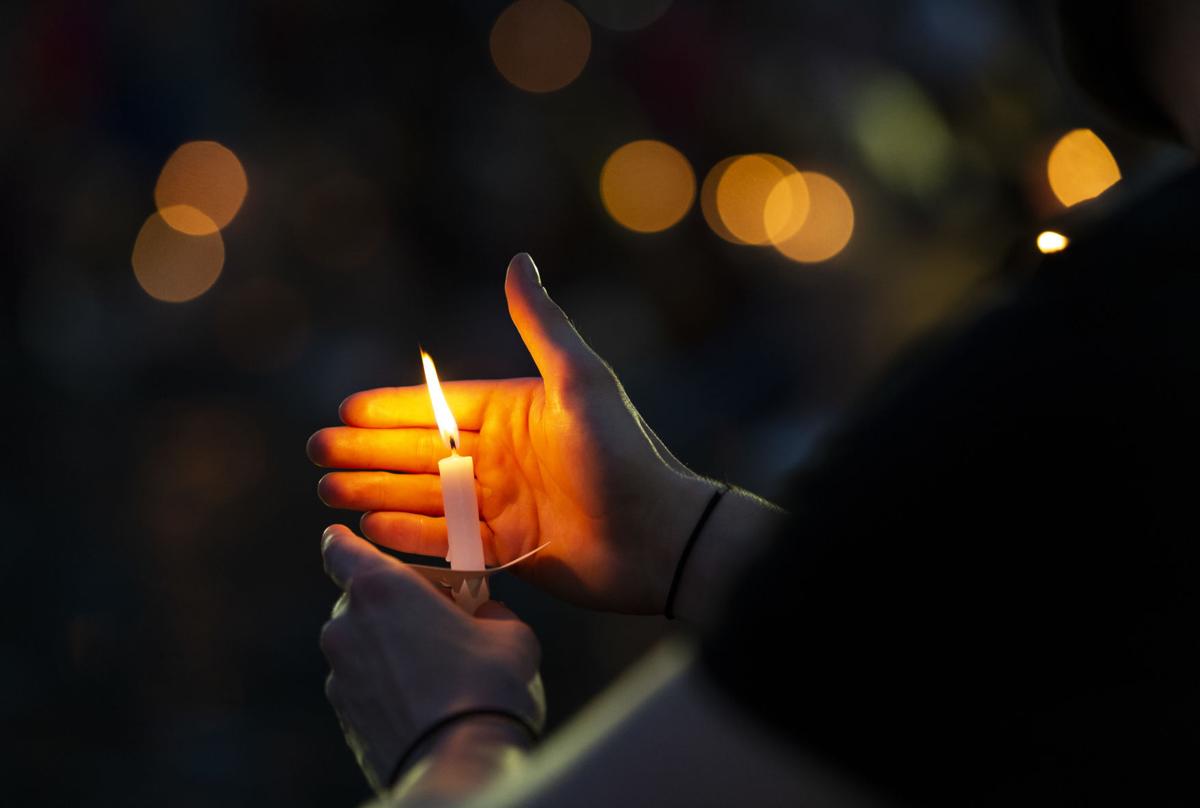 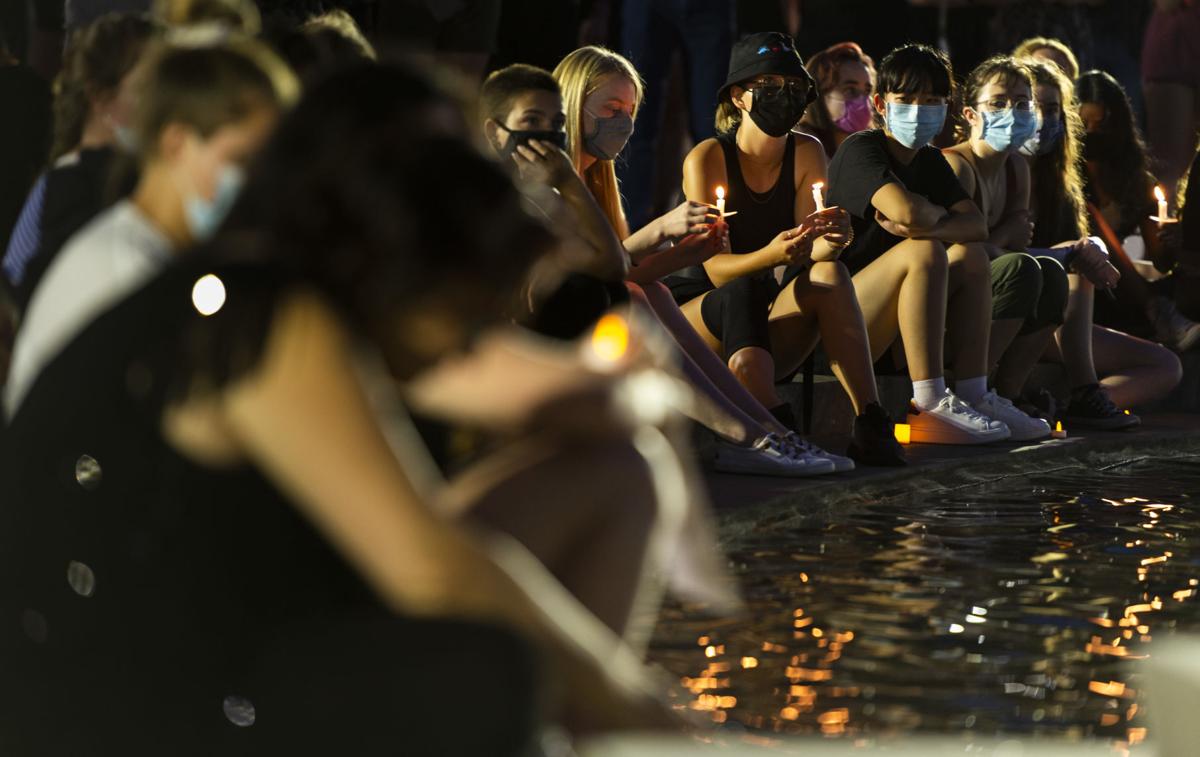 Students and supporters gathered outside the Nebraska Union on Monday in a show of solidarity with sexual assault survivors.

In the fifth demonstration in seven nights since a 17-year-old University of Nebraska-Lincoln student reported being sexual assaulted at the Phi Gamma Delta fraternity Aug. 23, organizers Monday lit candles in a visible display of support for sexual assault survivors.

Monday night's vigil marked the first time protesters didn't organize within sight of the fraternity house at 1425 R St., instead gathering on the north side of the Nebraska Union, surrounding Broyhill Fountain as familiar voices addressed a crowd of a few hundred people.

"As a woman, it hurts to know that I'm surrounded by so many survivors," said Dominique Liu-Sang, a community organizer who has been a vocal leader at each of the protests. "We shouldn't have survivors at all. Because it shouldn't be happening."

Batool Ibrahim, UNL's student body president, called on attendees to continue demanding changes in behavior that she said had been allowed to go on at the university's downtown Lincoln campus "for years."

As of Friday, there had been 78 rapes or attempted rapes reported at UNL since 2015. In the three days since, campus police have fielded reports of five more.

"I think that we've proven that we're not here to go away in a few days," Ibrahim said. "I think this vigil is a mark of that."

The backdrop for the vigil, first set last week by four days of protests outside the Fiji house, was amplified Monday when campus police fielded an early morning report of a nonspecific sex offense at the Sigma Chi fraternity at 1510 Vine St.

The offense was reported to UNL police at 1:28 a.m. Monday — almost exactly a week after the 17-year-old girl told police she  was sexually assaulted by a 19-year-old member of Phi Gamma Delta,  igniting the week of protests.

The nature of the latest report is unclear, described in police records as "Sex Offense - other." UNL Police were not immediately available for comment.

In an Instagram post late Sunday night, Sigma Chi announced it had removed the fraternity member accused of the sexual offense and would place the chapter on "a self-suspension."

Deb Fiddelke, UNL's chief communications officer, said the university first learned of the alleged assault through social media, which came two hours before the incident was reported to campus police.

"It's unfortunate that a possible sexual assault was reported on social media prior to being reported to the police," Fiddelke said in a statement. "The University Police Department is now fully investigating this incident."

Fiddelke added the "self-suspension" announced by Sigma Chi on Sunday is "not an official protocol" used by the university. UNL could take its own action following an investigation.

Four days before the alleged incident, Sigma Chi had posted a statement of solidarity as protests went on outside the Fiji house, vowing to "do our part to create a safe and comfortable environment for all in our community."

The reported offense at the Sigma Chi house was one of five sex offenses reported to campus police Monday. The other four — all reported between 10 a.m. and noon — were belated reports, with three of them dating to 2020 and the fourth stemming from early 2021, according to the department's crime log.

Nine of the alleged sexual offenses since 2015 occurred in Greek housing, according to UNL.

That university police have received an influx in reports of rape since protesters ushered UNL into a state of reckoning isn’t surprising to advocates. Marcee Metzger, the executive director of Voices of Hope, predicted the development in an interview with the Journal Star last week.

The latest incident appears to be the second reported sex offense at the Sigma Chi house since 2010. In September 2012, campus police fielded a report of a rape at the fraternity, according to archived reports.

In 2009, a former fraternity member filed a lawsuit claiming he had been hazed for months. Another said he had been sexually assaulted during an off-campus party. The two former pledges settled with UNL and Sigma Chi out of court.

Sigma Chi was suspended for more than two years before entering a probationary period in 2011. The fraternity was suspended indefinitely in 2012 because of underage drinking at an off-campus party during its probation. It was reinstated in 2014 after "a reboot," a member of the chapter's advisory council told the Journal Star then.

At least three women who spoke at a gathering outside the Nebraska Union on Thursday night said they were instructed as UNL freshmen to avoid Fiji, among other fraternities.

"I’m a 35-year-old mom who never went to UNL, and even I have heard the word-of-mouth warnings about the fraternities she mentioned," Sen. Megan Hunt tweeted after speaking at Thursday's gathering. "These open secrets are a big clue."

UNL maintains a comprehensive list of campus and local resources for sexual assault survivors on its website, including information on how to report sexual assaults to both law enforcement and the school's Title IX office.

Why elephants are the only mammals that can't jump

Why elephants are the only mammals that can't jump

Ibsa Mohamed was brought into custody near 10th and C streets at around 9:30 a.m. on Monday — about eight hours after the incident that saw the 20-year-old hospitalized with non-life-threatening injuries, police say.

SUV with loaded gun inside stolen after owner stopped to search for dog, Lincoln police say

The 26-year-old woman parked her blue 2008 Hyundai Santa Fe, turned on her hazards and left the car running as she sought the dog, which she noticed while driving on the roadway Monday night, according to police.

"The fact that this was a second time that this happened there's no question in my mind that this would've continued until you were caught or she decided to tell someone," the judge told David Macias.

Five gaming consoles -- worth about $600 each -- were stolen, in addition to some games, but the club is still taking inventory.

Students and demonstrators gathered five times over recent nights to protest after an alleged sexual assault was reported on campus, although leaders on Wednesday called for a two-week break.

The Boys and Girls Club center at Park Middle School is out over $13,000 in equipment after being targeted by burglars for the second time in less than a week.

Marcee Metzger, who said Voices of Hope has heard reports of sexual violence from UNL alumni as far back as the 1980s in the last week, said a shift in attitudes on campus would be necessary to see the kind of change desired.

The department's low arrest rate in reported sexual assaults has come under scrutiny after students protested five times in eight days following an alleged rape at the Fiji house.

The sharp increase stems from a student who reported being subjected to unwanted sexual touching by a partner an estimated 10 times while they were dating, police said.

Students and supporters gathered outside the Nebraska Union on Monday in a show of solidarity with sexual assault survivors.