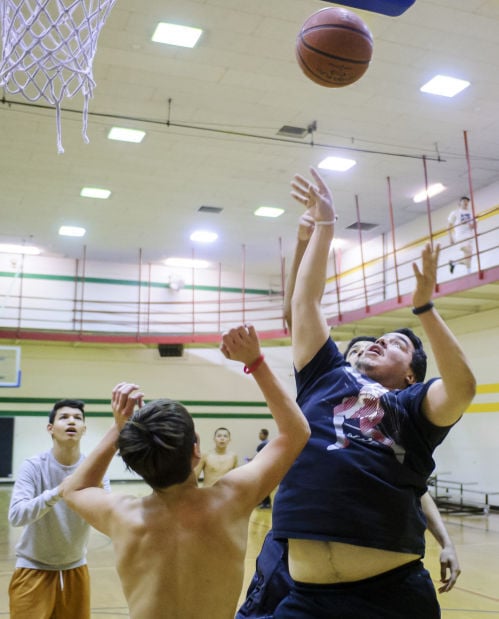 Victor Romero, a volunteer for the Golden Warriors youth program, jumps for a rebound while playing ball with members of the program and their friends at the downtown YMCA in 2014. 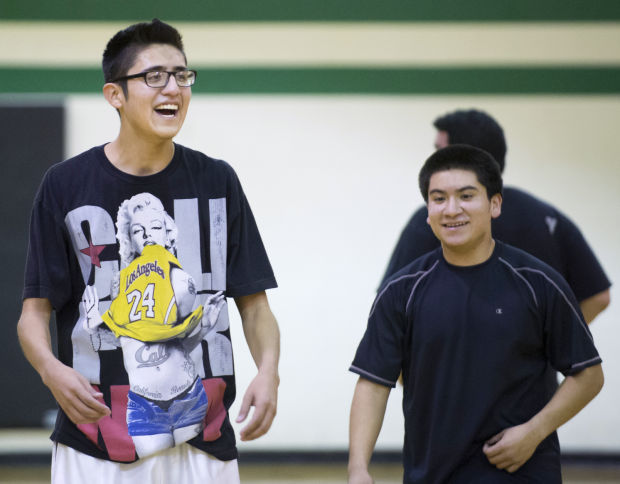 Alex Puentes, 16 (left), and Gustavo Garcia, 17, react to a good shot while playing basketball with other members of the Golden Warriors youth program and their friends at the downtown YMCA. A new effort by Lincoln police and Lancaster County officials seeks to identify at-risk young people early and connect them with nonprofit groups. 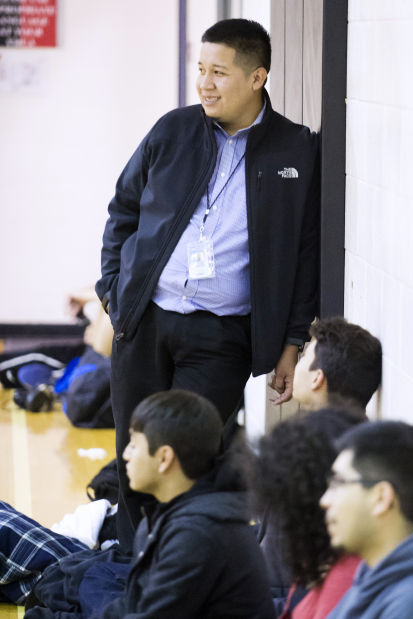 Fresh out of drug and alcohol rehabilitation, the 18-year-old has tried a lot of methods to stay out of trouble. He’s hopeful he’s found the solution in a program that keeps him busy on Fridays, typically one of his more troublesome nights.

“It’s a good program,” he said of Golden Warriors, which serves at-risk youth and youth already in the juvenile justice system. “You go to different places and learn about different things. You always stay active.”

It’s one of the many ways Lincoln’s nonprofit community works to support at-risk youth and combat the temptations facing them.

And now, those nonprofits have a new tool in their toolbox.

The Lincoln Police Department and Lancaster County have started Operation Tipping Point, a program of monthly meetings with community service providers and law enforcement to come up with ways to keep at-risk youth from getting involved with gangs, said Lincoln Police Capt. Jon Sundermeier, who helps lead the program.

“Mostly it came about because here in Lincoln we were recognizing we need to do more to address the gang situation,” he said. “We think that gang crime is on the uptick.”

Last year, the shooting death of 20-year-old Erick Porcallo Musito by gang rival Hector Antonio Lopez, who then shot and killed himself, caused concern among authorities that gang activity was surging, he said.

Sundermeier said the deaths suggested local gang activity had reached a new level and that Lincoln was facing the kind of crime that had, until then, taken place only in larger cities like Omaha.

“We think Lincoln is at a tipping point,” he said. “We have the ability at this point in time to tip the scales and maybe slip backwards to improve the problem instead of tipping forward and seeing gang violence become more entrenched.”

Operation Tipping Point has been hosting meetings of local officials for about a year and a half, working to identify local youth who are involved in gangs or at risk of joining one and directing resources to prevent or end gang involvement.

The program received an $11,650 grant from the Nebraska Crime Commission in July. It is run jointly by LPD and the county, which coordinates efforts with local community agencies. LPD, meanwhile, has focused on educating those community agencies about effective gang prevention strategies.

Sundermeier said Operation Tipping Point will serve as an organizing group for anti-gang efforts but likely won’t offer direct services. Primarily, he said, the program will work to ensure each at-risk youth identified by the program’s partnering agencies gets the help he or she needs.

“This group would try to own that problem of gang prevention in Lincoln and use all of the existing resources as the actual program itself,” he said.

The city plans to use a $250,000 U.S. Department of Justice grant to hire two officers to fight gangs.

On a recent Friday night, nearly 20 Latino youth in the Golden Warriors program played basketball at the downtown YMCA after watching a documentary at the University of Nebraska-Lincoln about immigration.

Steve Solorio, youth program coordinator for El Centro de las Americas, said programs like Golden Warriors are essential to providing alternatives and deterring at-risk youth from joining gangs. He said the program allows the young men to hear from Latino role models, get exercise and learn from each other about ways to stay out of trouble and succeed in school.

The program tracks participants’ grades and school attendance and gets their families involved, he said. Participants are not allowed to wear gang-related clothing or display gang-related tattoos.

Primarily, it gives them something else to do.

“I used to get in trouble a lot,” said Mike Orozco, 16. “It keeps me from negative things.”

Olga Miranda knows firsthand why she must keep an eye on her youngest son, Bryan, and on his clothes, his friends and his behavior.

Gangs in Lincoln are growing and getting more violent, so Mayor Chris Beutler and Lincoln police are trying to get federal money to fight them.

Family and friends of Erick Porcallo Musito are invited to attend a vigil in his honor at 18th and G streets midnight Sunday.

Victor Romero, a volunteer for the Golden Warriors youth program, jumps for a rebound while playing ball with members of the program and their friends at the downtown YMCA in 2014.

Alex Puentes, 16 (left), and Gustavo Garcia, 17, react to a good shot while playing basketball with other members of the Golden Warriors youth program and their friends at the downtown YMCA. A new effort by Lincoln police and Lancaster County officials seeks to identify at-risk young people early and connect them with nonprofit groups.