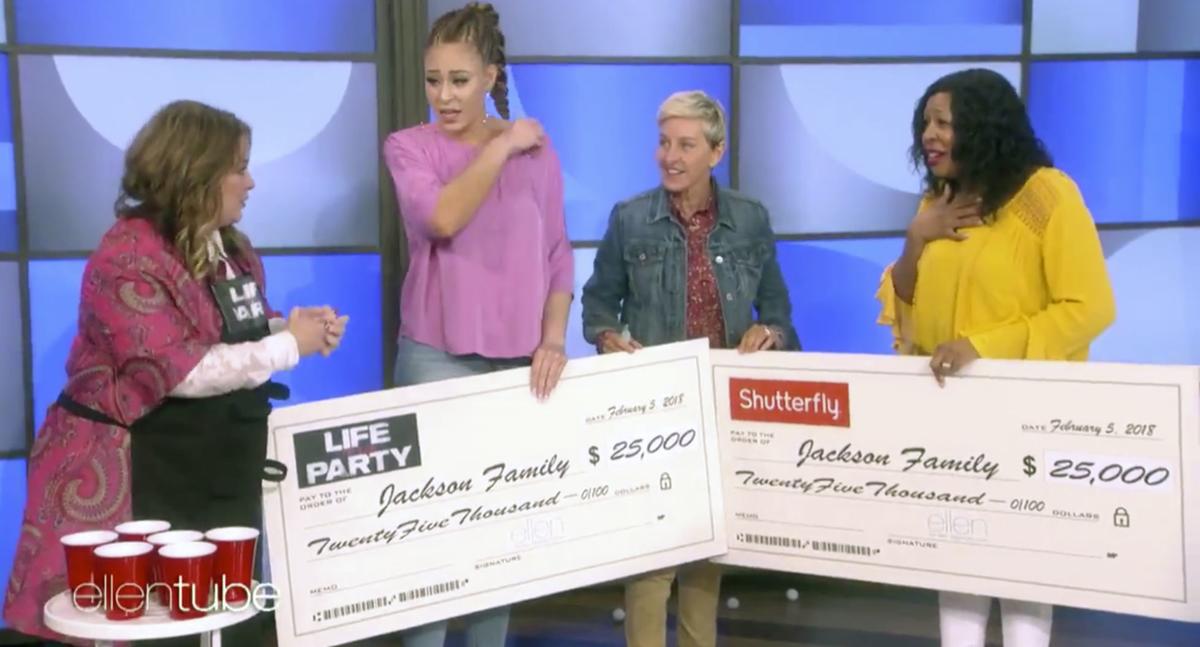 Lincoln Police Officer Chassidy Jackson-Goodwin (right) receives $75,000 from actress Melissa McCarthy, her new movie “Life of the Party” and Shutterfly to help the mother go back to school. Jackson-Goodwin's daughter, Jaida Jackson (center left), wrote to "The Ellen DeGeneres Show,” hoping to help her mother out after she took out loans to put the 19-year-old through college. 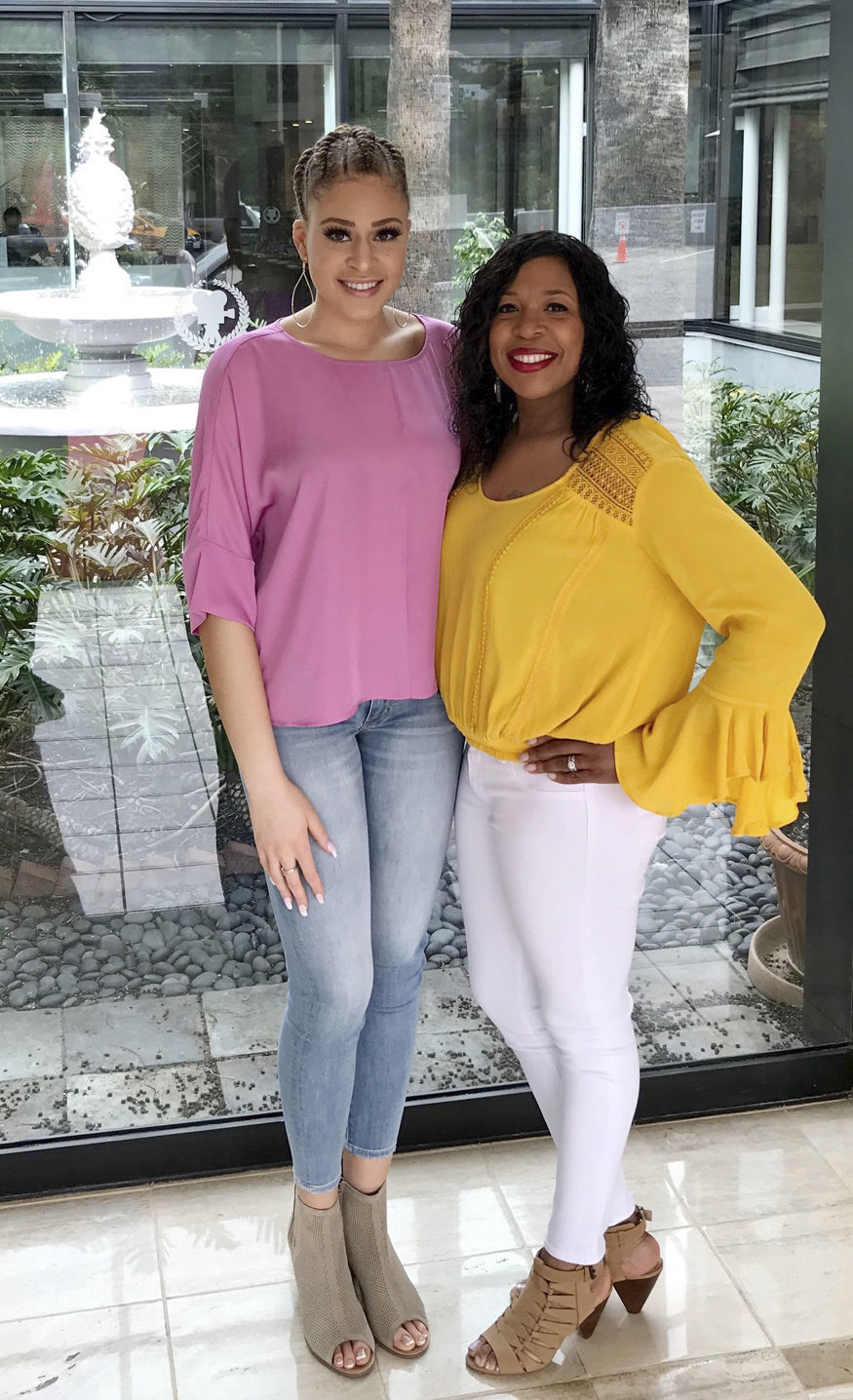 Jaida Jackson (left) and her mother Chassidy Jackson-Goodwin, a Lincoln police officer, will appear on "The Ellen DeGeneres Show" on Thursday.

A whirlwind of excitement has begun to settle in for Lincoln Police Officer Chassidy Jackson-Goodwin, who was given $75,000 on "The Ellen Degeneres Show" to fulfill her dream of finishing her college education.

She explained how her mother, who raised her as a single parent, had taken out $17,000 in loans to help her daughter attend the University of Nebraska at Omaha, and how Jackson-Goodwin had never completed the bachelor's degree she sought in criminal justice.

She had earned an associate degree in 1998, and took Jaida — born six days earlier — to her graduation ceremony at Metro Community College.

From there, she worked at Gallup for a short time, then at the Lancaster County jail before joining the Lincoln Police Department in December 2001.

Two weeks ago, the patrol officer and self-proclaimed busybody was in poor spirits: She was recovering from surgery and had learned that a lottery ticket she bought wasn't a winner.

When "Ellen" came on that afternoon, she set her sights on scheduling a mother-daughter trip to watch the upbeat show in person.

Then a phone call changed everything.

A staffer for the show told her it had received a letter about her and wanted to know if she and her daughter were interested in free tickets.

She couldn't believe the coincidence.

The pair jumped at the opportunity, leaving last Monday and returning Wednesday.

In Los Angeles, they couldn't contain their excitement, snapping cellphone photos of almost anything they could find with the city's name. Even then, Jackson-Goodwin said, "We just thought we were going to the show."

In the studio, Ellen's audience danced like it always does — a commercial break nightclub.

Then comedic actress Melissa McCarthy started promoting her new movie, "Life of the Party" — a film about a former stay-at-home mom who goes to college with her daughter.

The Lincoln women turned to each other and said, "That is us."

Then came the next segment, when Degeneres called Jaida to the stage for a game of beer pong with McCarthy. The mother-daughter duo looked at each other and started screaming, then Jackson-Goodwin was asked to join because of Jaida's young age.

The cop of 16 years tossed ping-pong balls into red plastic cups attached to a vest worn by McCarthy, hoping to land $1,000 for each ball she sunk.

The crowd counted aloud the seven she landed.

"Jaida didn't even remember what happened," her mom said Tuesday.

This might be the most moving game of beer pong ever played. I love you, @MelissaMcCarthy. pic.twitter.com/HKAXowo13H

"You’ve spent your life serving others and are beloved by your community,” she told Jackson-Goodwin. "Your dream is to go back to college, look at that, and get your bachelor’s degree, but you can’t afford to go back.

“What a coincidence you’d be here on this day.”

The internet image-publishing service Shutterfly, McCarthy's movie and McCarthy herself each gave Jackson-Goodwin $25,000 to help her go back to college.

McCarthy and Degeneres were genuine on- and off-camera, Jackson-Goodwin said.

Omaha's Yolonda Ross returns to TV in 'The Chi'

Yolonda Ross really wanted to play Jada, a single mom who works as a nurse while raising her teenage son in "The Chi."

Some of Jamie Rankin’s family members didn’t understand why her new in-laws gave her an iguana statue as a Christmas gift.

Amy Goodman, host of “Democracy Now!,” will speak and sign books at 8 p.m. April 20 at the Rococo Theatre as part of Lincoln community radio s…

Lincoln woman to compete on 'Jeopardy!'

Lincoln's Catherine Biba will appear Thursday as a contestant on "Jeopardy!" Her episode will air at 4:30 p.m. on KOLN/KGIN-TV.

Lincoln police officer and daughter get another surprise on 'Ellen'

Lincoln Police Officer Chassidy Jackson-Goodwin (right) receives $75,000 from actress Melissa McCarthy, her new movie “Life of the Party” and Shutterfly to help the mother go back to school. Jackson-Goodwin's daughter, Jaida Jackson (center left), wrote to "The Ellen DeGeneres Show,” hoping to help her mother out after she took out loans to put the 19-year-old through college.

Jaida Jackson (left) and her mother Chassidy Jackson-Goodwin, a Lincoln police officer, will appear on "The Ellen DeGeneres Show" on Thursday.