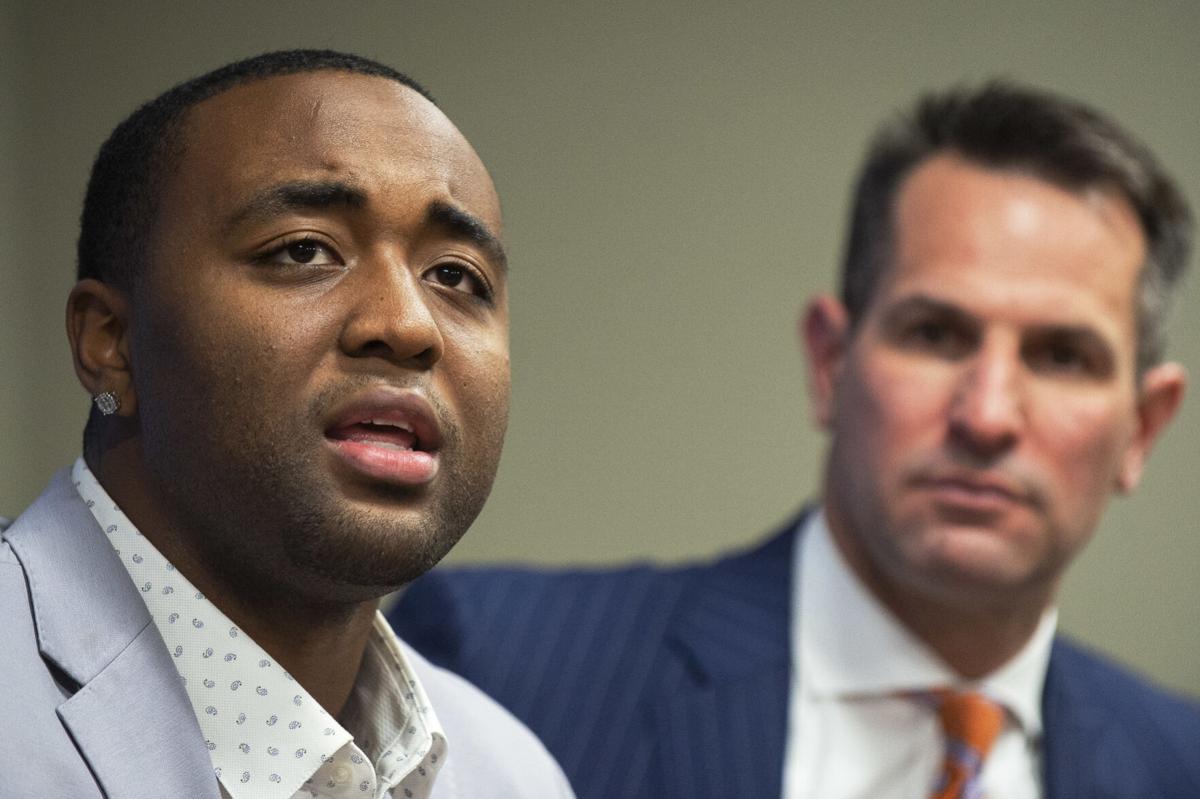 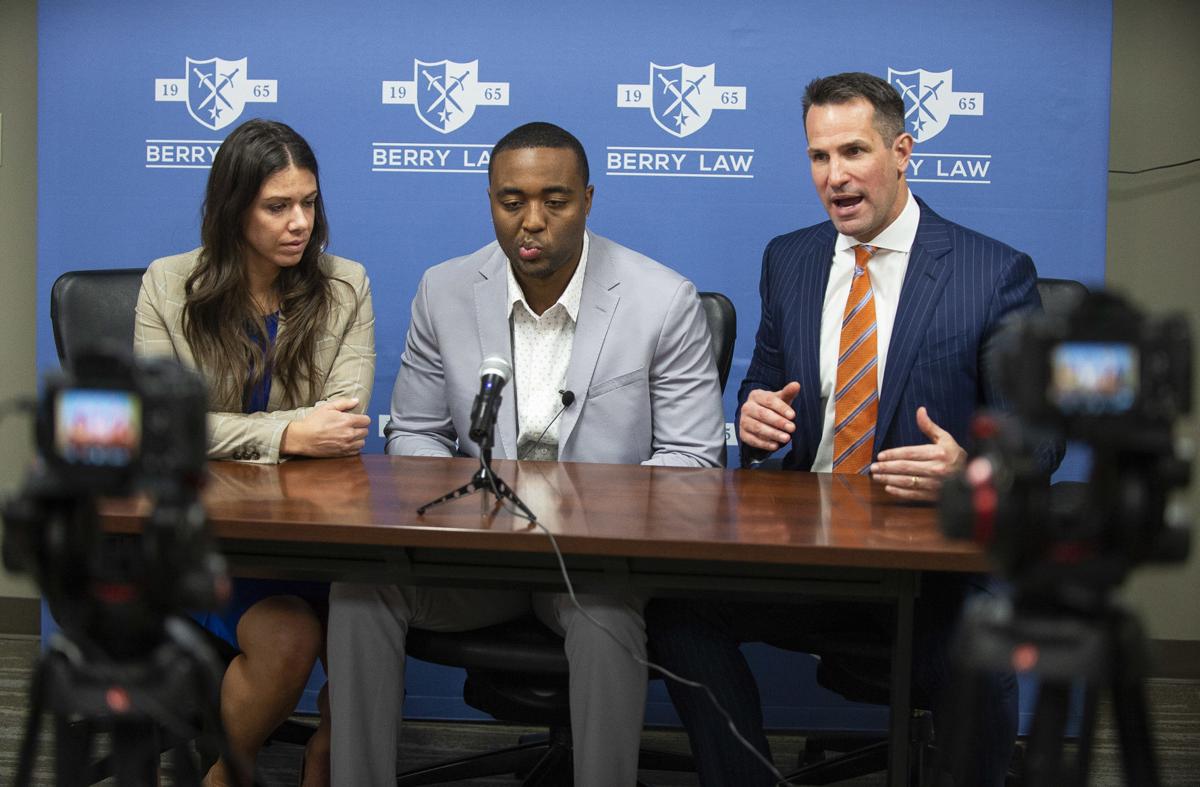 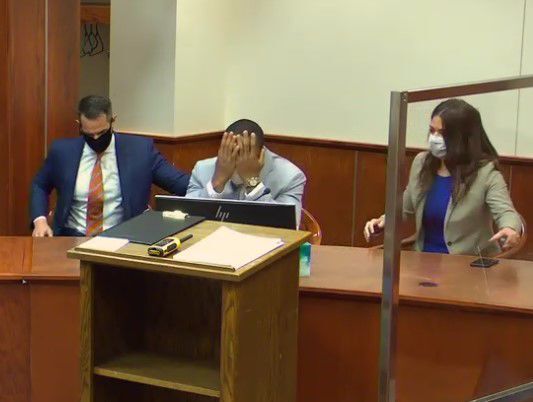 After the not guilty verdict was read in the courtroom Thursday morning, Katerian LeGrone put his hands to his face, seemingly in relief.

After the verdict was read, LeGrone, 21, put his hands to his face in a visual sign of relief.

Later, he tweeted: "Today I was acquitted of false accusations of sex assault. The past two years fighting for my innocence have been so hard, but justice was served today. Thank you for everyone who stood by me during my hardest times. Now I am moving forward to pursue my academic and football goal."

Prosecutors alleged on the night of Aug. 25, 2019, LeGrone sneaked into Andre Hunt's bedroom at the apartment they shared, got into position behind the 19-year-old woman and switched places with his roommate before she knew what happened.

The woman told Lincoln police later that night both men raped her. She initially said she'd said "No," but later acknowledged she didn't do or say anything to show her lack of consent.

She told the jury she was too scared of what might happen if she did, so she prayed in her head for it to stop.

Prosecutors agreed to reduce Hunt's sexual assault charge to two misdemeanors, accessory to attempted false imprisonment and false information, in exchange for his testimony. They conceded in closing arguments that they couldn't prove a sexual assault in Hunt's case. But they argued LeGrone's case was different.

Under Nebraska law, a person must express lack of consent verbally or physically, unless it would be useless or futile to do so or the person is physically or mentally incapable of resisting or appraising the nature of his or her conduct. For instance, if they are intoxicated or drugged.

In 2018, a bill proposing to change the consent law to a "yes means yes" standard was killed in committee after defense attorneys and prosecutors alike came out against it.

Prosecutors argued that LeGrone didn't give the young woman a chance to consent.

LeGrone told police he asked if he could join.

LeGrone told police: 'Everything that happened in that room was consensual-like'

"But we certainly appreciate the hard work of the jury. We also are very proud of the victim, the law enforcement officers and our attorneys who worked on this case," he said. "These are difficult cases."

But victims of sexual assault should not be discouraged, especially when it comes to reporting sexual violence, Condon said, adding that he will continue to do everything he can to be an effective advocate on their behalf.

Across town at a news conference, defense attorneys Mallory Hughes and John Berry said they believed in LeGrone from day one.

LeGrone, sitting between them, said it was one of the hardest things he's ever had to endure, but he never lost focus or faith. He said he's been working hard and hopes to go back to college and to playing football soon.

Asked about what was going through his head as the woman testified, when he could be seen tearing up, LeGrone said it was hard to hear.

"It just seemed like someone just playing with your life at this point. It was just a tough moment for me," he said.

Hughes said we can't judge people for their decisions, unless they lie about them.

"And I am so grateful that we had 12 men and women who analyzed the case and saw through the lies and served justice today," she said, describing them as a diverse group, split nearly evenly between men and women, ranging in age from mid-20s through 60s, white and Black.

The jury deliberated for about 3 hours before the verdict was announced shortly after 10 a.m. Thursday.

"So if you don't want it, just say that you don't want it. And the law will support that decision," the defense attorney said. "But you've got to make your voice heard. You can't make somebody guess about what's going on in your head."

Extended protections for student journalists fail to advance in Legislature

The afternoon debate took an unusual detour after Sen. Mike Groene dismissed some senators' understanding of constitutional law as well as the law schools they attended, including the University of Nebraska.

The measure would raise income limits for Supplemental Nutrition Assistance Program, or SNAP, benefits enough to help about 2,500 households.

Life in the Red: One draft analyst's thoughts (and mock draft landing spot) on Brenden Jaimes

Could the former Husker offensive lineman be the highest NFL Draft selection in the last three or four years? One expert thinks so.

The driver of the other vehicle involved in the crash, an 18-year-old Murdock man, was found guilty of misdemeanor motor vehicle homicide.

Federal prosecutors said 216 victims lost a total of at least $5,829 from the thefts, which occurred at the West Omaha Post Office.

The woman's body was discovered in a vehicle near 10th and Van Dorn streets at around 7:45 a.m. Tuesday.

Inmate missing from Community Corrections Center-Lincoln back in custody

In the lawsuit filed this week, Guy Brock sued the city, the mayor and city attorney, alleging they retaliated against him for exercising free speech and petitioning his elected and appointed representatives.

Lancaster County Court Judge Thomas Zimmerman set Andre Hunt's sentencing for July, when he could get up to a year in jail. Defense attorney Carlos Monzón said his understanding is that the state won't be seeking jail time for Hunt.

After the not guilty verdict was read in the courtroom Thursday morning, Katerian LeGrone put his hands to his face, seemingly in relief.