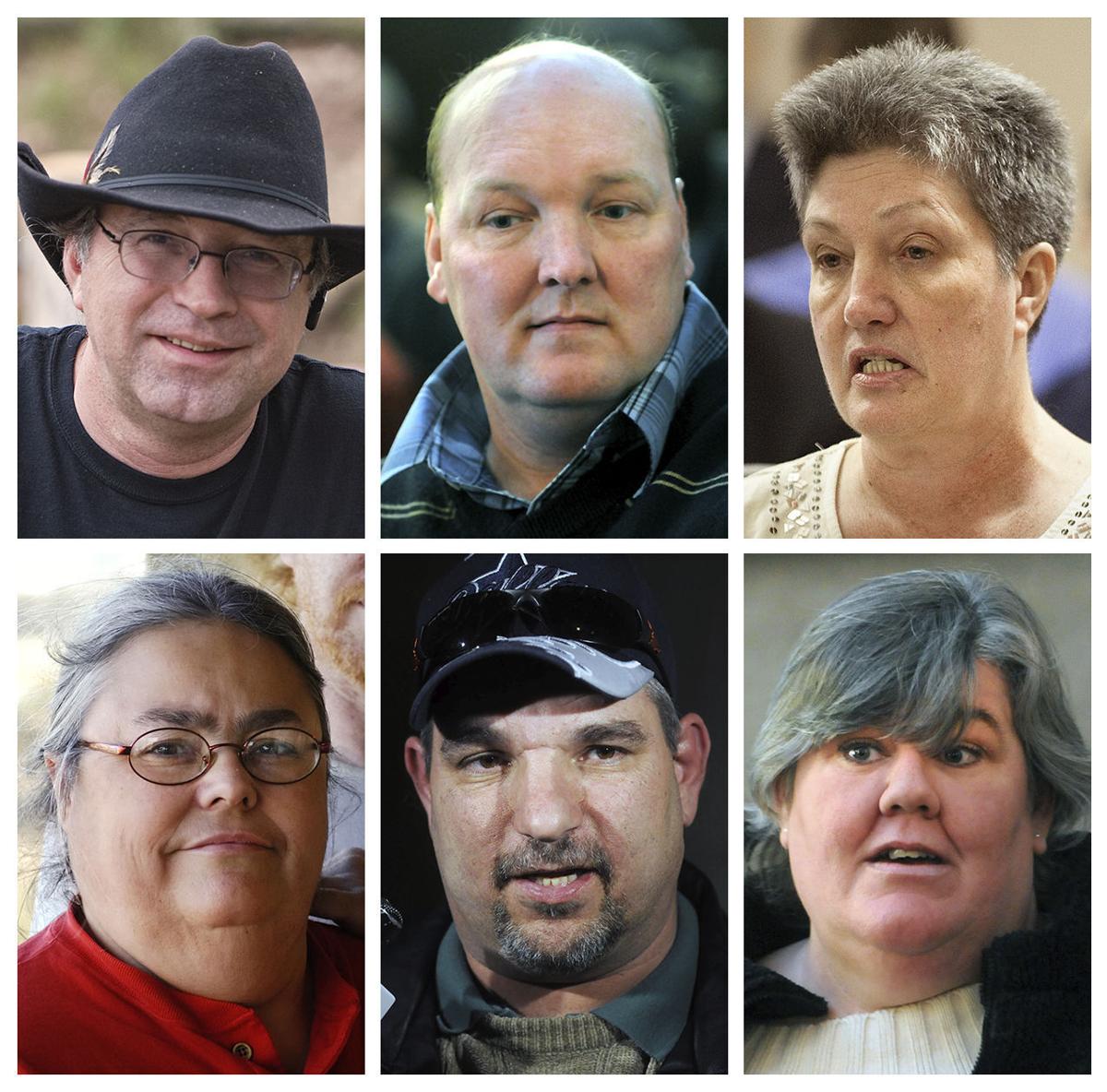 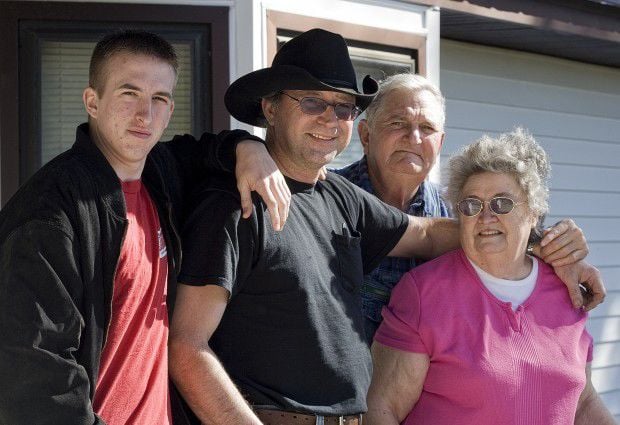 Joseph White (second from left), with his son Jason Poteet (21), and his parents Carroll and Lois White in Holly Pond, Alabama, after he was released. White died in 2011. 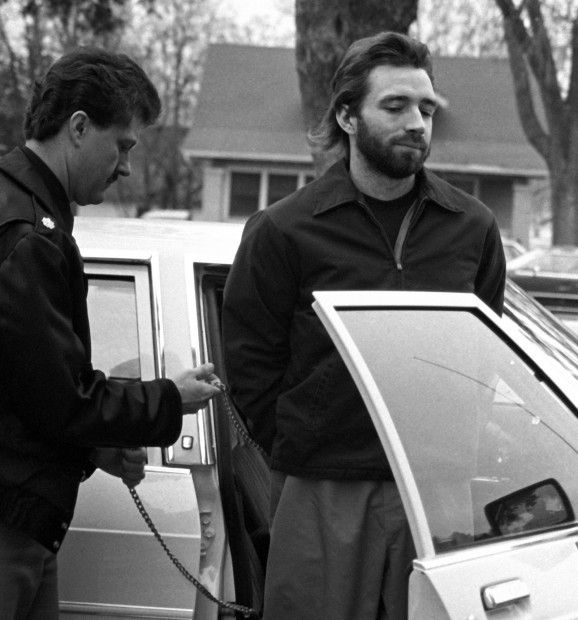 Joseph White is taken to his preliminary hearing in the murder of Helen Wilson in the 1989 photograph. Decades later, White won the right to have evidence from the murder tested for DNA, and and he and five other defendants were exonerated. (Courtesy Beatrice Daily Sun) 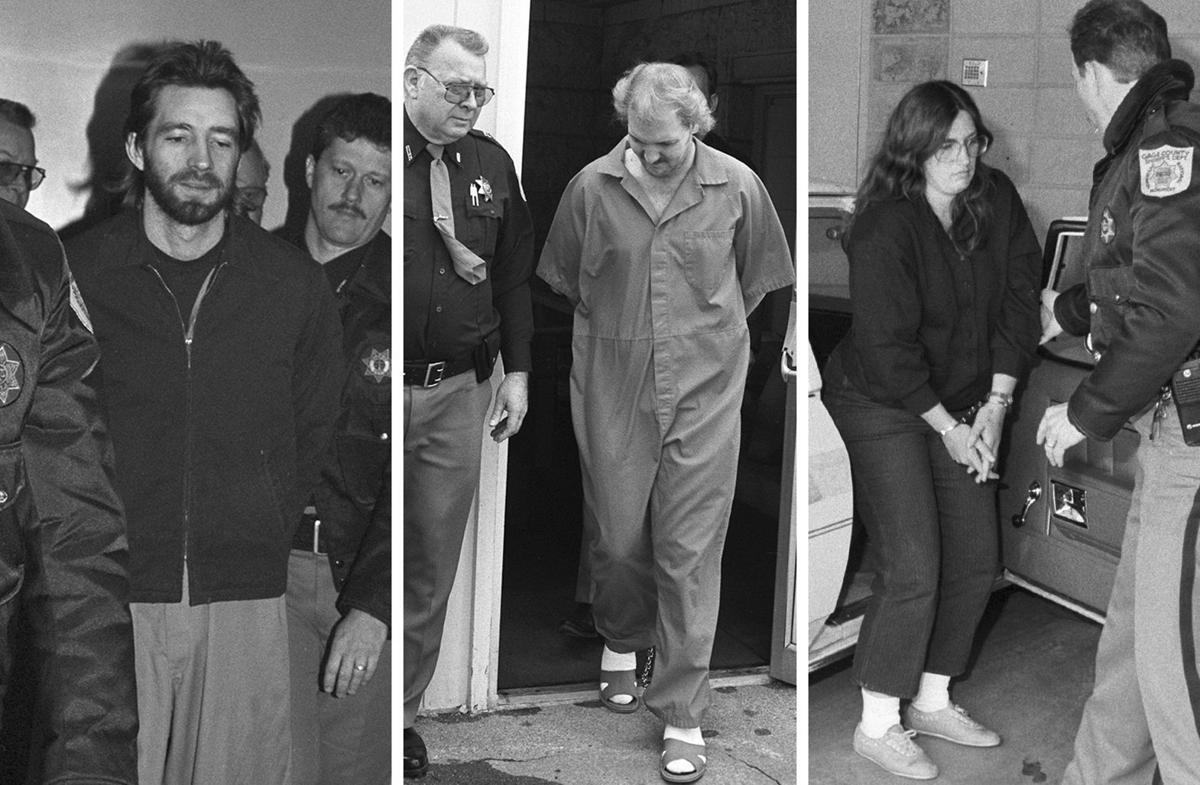 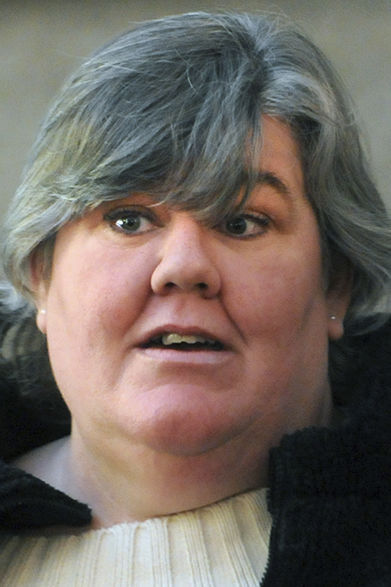 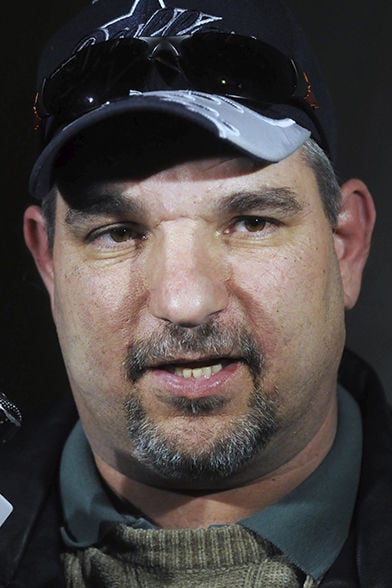 Gage County and the people behind a cold-case investigation that sent six innocent people to prison for a 1985 rape and murder are on the hook for $28.1 million following a federal jury's verdict Wednesday.

Jeff Patterson, an attorney for the six convicted of a crime later tied by DNA to another man, said the jury's award puts the blame for the wrongful convictions where it belongs: on investigators.

But it was just a step, he said, suggesting an appeal is expected.

Jennifer Tomka, an attorney on the other side, would only say that it's too early to comment and that she needs to talk to county officials.

Shortly before 11 a.m. on the fourth day of deliberations, word began to spread through the federal courthouse that the jury had reached a verdict.

Neither the plaintiffs nor defendants were in the fifth-floor courtroom 20 minutes later to hear Senior U.S. District Judge Richard Kopf read the 14-page verdict form.

The three each spent nearly 20 years in prison before DNA testing in 2008 connected another man, Bruce Allen Smith, to Helen Wilson's brutal death. By then, Smith had died.

After they were cleared in Wilson's death, the six sued the county, the deputies and late Gage County Sheriff Jerry DeWitt for building a case on inconsistent statements, coerced false confessions and testimony about "memories," which came to co-defendants in nightmares after working with Price, who had treated at least two of them previously.

All but White entered pleas, and Taylor, Dean and Shelden testified against him at trial, saying they recalled the chaotic scene in Wilson's tiny Beatrice apartment after talking with Price in jail.

Ultimately, White's conviction was overturned and the other five were pardoned.

Their first civil trial, in January 2014, ended with a deadlocked jury. The second started June 6.

At the end of four weeks, it was for the jury to decide whether Searcey, Price and DeWitt's estate were individually liable for leading a reckless investigation, manufacturing false evidence or conspiring to do either, and whether Gage County should be liable, too, because the sheriff had established a policy by his words or actions which allowed it to happen.

The jury cleared DeWitt's estate of liability and found there was no conspiracy but ruled against the county on behalf of each of the six, who sought half a million dollars for each of the roughly 75 years combined they spent in prison — more than $37.5 million total.

Attorney Maren Chaloupka said the six may never see the money but that's not what matters.

“What matters is this jury heard all the evidence and issued a very fair, very specific decision of their judgment of the evidence.”

Chaloupka said it meant a great deal for them to hear that the jury agreed that their lives matter.

Still, she said, she doubts the verdict will change minds in Gage County, where some still believe the six were involved in Wilson’s murder.

But, Chaloupka added, “I hope that those who judged our clients to be guilty will consider that question anew.”

Presumed Guilty: An in-depth look at the Beatrice 6 case

Before he left the courthouse, juror Jason Bartels of Sterling called it a hard-fought battle on both sides.

"We had our hands full," he said. "It wasn't something I took lightly."

Bartels, 29, said he thought the jury treated everybody equally and that he couldn't really blame Searcey, who he described as a bulldog.

Even though they found against him, Price and the county, he said, "We're all humans."

Reached by cellphone Wednesday afternoon, Searcey hung up, then declined to comment in a text.

In a call from Alabama, Joseph White's mother, Lois, said she is relieved the trial is over. She sat through the four-week trial but since has gone home.

"Finally, Gage County and company were being held responsible for what they did to my son and the other five," she said. "I am relieved that this part of it is done, and I'm not worried about the rest of it."

For her, it was about clearing her son's name and maybe keeping the same thing from happening to others.

Joe White went home to Alabama after he was released from prison. He died in a workplace accident there in 2011.

"Joe never stopped fighting for justice," said Patterson, a lead attorney for the six. "And his family, after he passed, never stopped trying to clear his name. That was really as important as anything else."

Asked what he would think if he were alive, Lois White said: "It's about time."

Beatrice 6 ask jury for more than $37.5M in damages

Six people convicted of a Beatrice woman's 1985 rape and murder, later tied by DNA to another man, told a jury to send a message to Gage Count…

Both sides rest at trial over Beatrice 6 investigation

For the past three and a half weeks, the attorneys laid out the case for the jury in bits and pieces before ending up back at the beginning, F…

Winslow: 'I knew that I did not do those things to her'

Sitting in a jail cell in 1989, Tom Winslow knew he could die in the electric chair for a Beatrice woman's rape and murder four years earlier.

The prosecutor behind the Beatrice 6 convictions returned to the stand Wednesday, a day after a defense attorney accused him of withholding re…

Deb Shelden's attorney, Paul Korslund, got appointed to represent her on a murder charge late on a Friday afternoon in April 1989, started wor…

Beatrice 6 prosecutor decided in 1989 DNA testing was too expensive

In 1989, before he prosecuted Joseph White for a brutal rape and murder later linked to another man, Dick Smith, then Gage County Attorney, lo…

A Beatrice company plans to expand into the former Husqvarna building.

Taxpayers, not insurance, to pay for Gage County mistake

Two former prosecutors said the result of the Beatrice 6 federal civil rights trial has everything to do with the death penalty debate in Nebraska.

Attorneys for Beatrice 6 offered twice to settle out of court

BEATRICE -- More than three years ago, attorneys for six people wrongly convicted of killing a Beatrice woman offered to settle a federal civi…

BEATRICE -- After 111 minutes behind closed doors Friday morning, the Gage County Board of Supervisors reached no decision on what to do next …

Two weeks after a $28.1 million jury verdict in their favor, attorneys for the Beatrice 6 turned in a $1.8 million bill Thursday for their fee…

Gage County is seeking to overturn or get a judge to reduce a jury's $28.1 million verdict awarded to six people who went to prison in 1989 fo…

Gage County has spent more than $1.2M on its defense

Gage County has paid more than $1.2 million to attorneys from six Lincoln firms to represent it in a federal civil rights trial brought by six…

As the clock ticks down to Nebraska voters' decision on whether to retain the Legislature's repeal of the death penalty, both sides of the iss…

Last week, one of six people wrongly convicted of killing a Beatrice woman in 1985 asked the state to garnish the wages of two Gage County she…

Joseph White (second from left), with his son Jason Poteet (21), and his parents Carroll and Lois White in Holly Pond, Alabama, after he was released. White died in 2011.

Joseph White is taken to his preliminary hearing in the murder of Helen Wilson in the 1989 photograph. Decades later, White won the right to have evidence from the murder tested for DNA, and and he and five other defendants were exonerated. (Courtesy Beatrice Daily Sun) 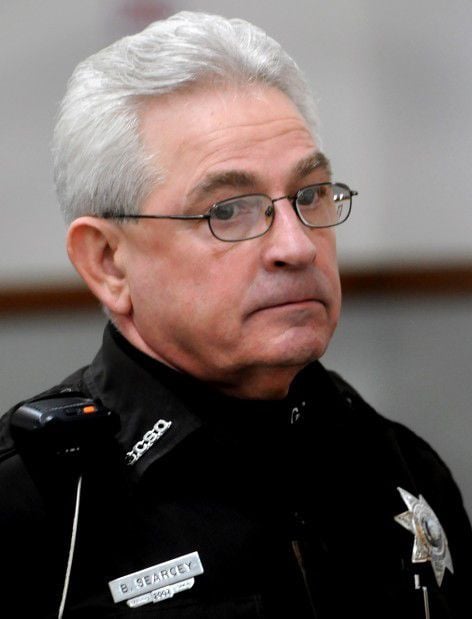 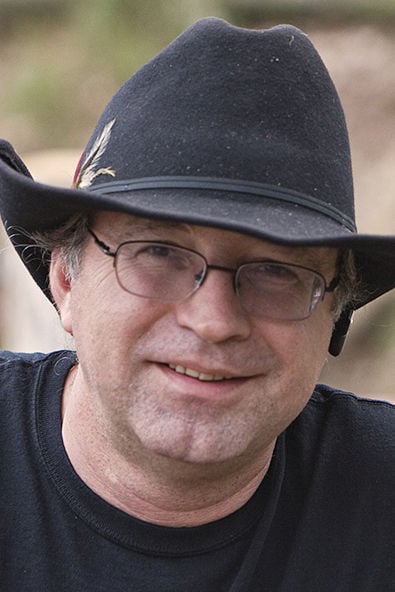 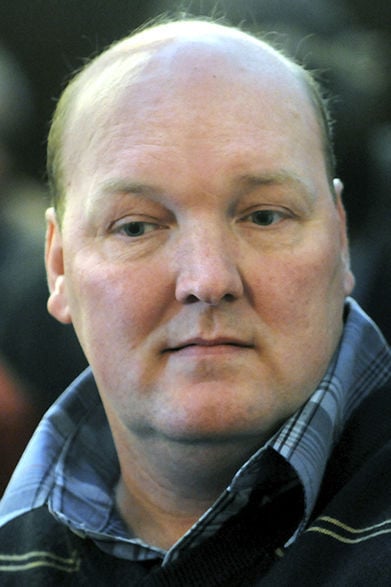 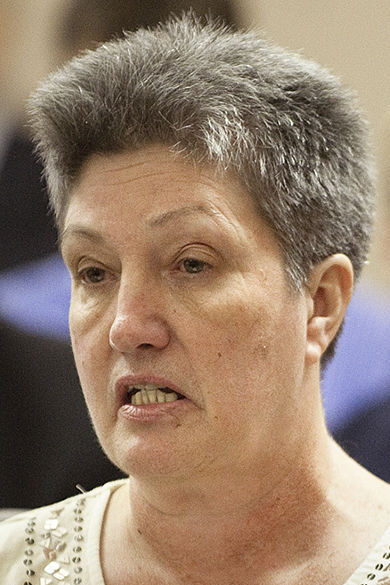 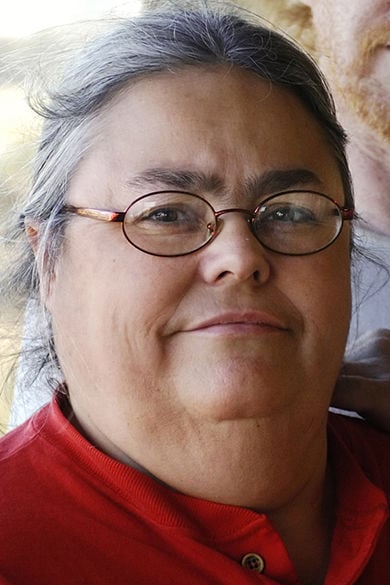