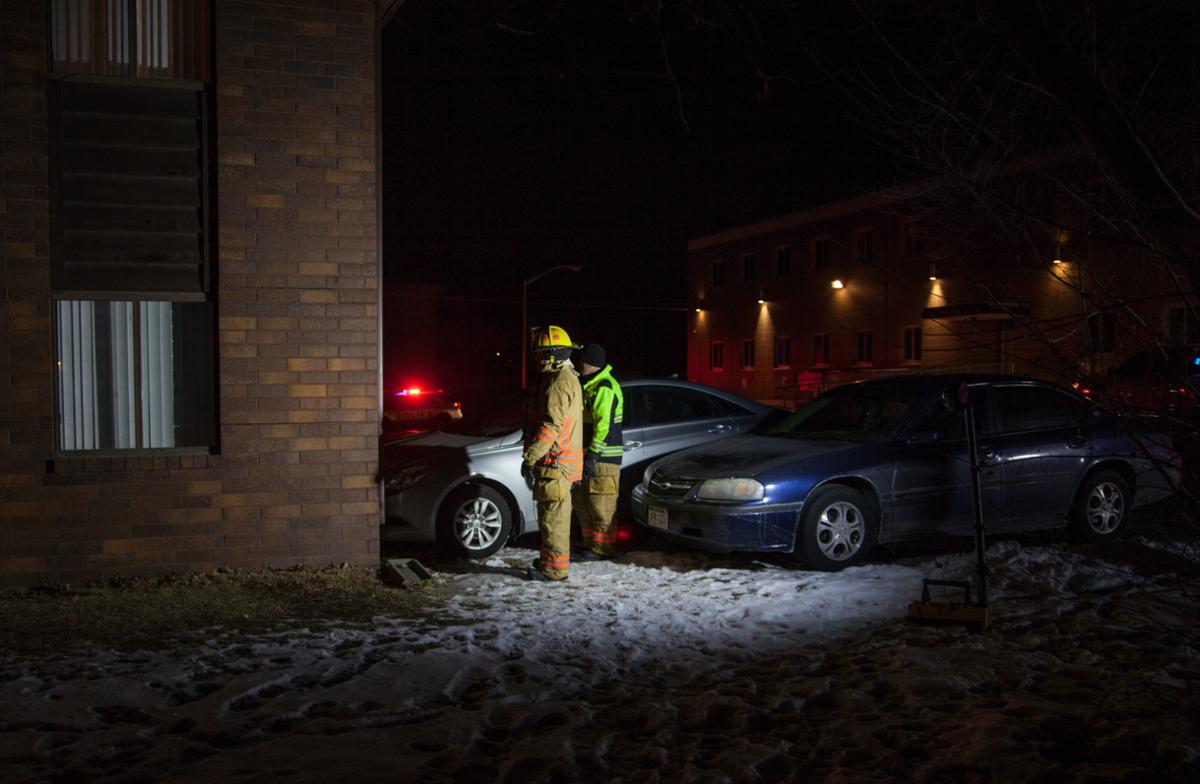 Firefighters examine the damage at 1634 Prospect St. after two parked vehicles were hit and went through the wall of the apartment building.

A Lincoln judge told a Beatrice man, shot by law enforcement officers outside a Lincoln apartment building last year when he tried to get away in a stolen vehicle as they closed in to arrest him, that what happened was all his fault.

"I continue to hear you got shot and that somehow that should mitigate what you did that day," Lancaster County District Judge Lori Maret told Thomas Sailors, 27, before sending him to prison for five years. "It doesn't."

If anything, she said, it exacerbated the situation, because he not only had put himself at risk, but also the community.

"It was your fault that anything that happened that day happened," Maret said.

At about 8 p.m. on Jan. 5, 2018, in a parking lot near 17th and Prospect streets, a U.S. marshal, who had spotted Sailors in the stolen 2007 GMC Yukon Denali and followed him there, struck the SUV's front bumper with the front of his unmarked pickup.

The U.S. marshal started firing as Sailors backed up, forcing a Lincoln police officer to dive into his cruiser, his feet being dragged on the pavement.

Police said the officer was left with minor injuries.

Sailors, shot at 19 times, drove away with shrapnel in his forehead and gunshot wounds to his left hand and left leg, the bullet traveling through his right leg and lodging in his buttocks.

Sailors drove himself to a hospital and later filed a federal lawsuit alleging excessive force. In March, he pleaded no contest to third-degree assault on an officer and operating a vehicle to avoid arrest.

Asked if he wanted to say anything Tuesday, Sailors said: "I don't know. I just want to go home to my family, go home to my kids. I'm sorry for what I've done. I think about it every day."

Deputy Lancaster County Public Defender Shawn Elliott said Sailors was struggling with an addiction to methamphetamine and was pretty much out of control at the time.

But, he said, Sailors had accepted responsibility for his actions — and he was shot.

Elliott said he didn't excuse the fact that Sailors left the area, but given that Sailors was under the influence, shot and didn't really know what was going on, getting away became his first priority.

Aside from Sailors, no one was injured, Elliott said, arguing for a sentence of time served. He's been in jail for about a year and four months.

Deputy Lancaster County Attorney Jim Rocke called it an accumulation of unlawful behavior by Sailors, who had stolen a vehicle in Gage County and fled law enforcement in it, prompting U.S. marshals to be looking for him.

"We can second-guess how it played out," he said. "But the fact of the matter is his actions led up to everything that happened that day."

A Lincoln man was arrested after leading Nebraska State Patrol troopers on a pursuit through Waverly neighborhoods Tuesday morning, a State Pa…

Lincoln man accused of getting meth by mail in new indictment

An indictment unsealed Monday accuses a 38-year-old Lincoln man of conspiring to distribute meth, including nearly a quarter-pound he allegedl…

Lincoln police arrested a 30-year-old man early Wednesday after a brief pursuit near the Capitol of a driver in a stolen car.

Inmate who walked away from Lincoln community custody prison re-arrested

An inmate who walked away from the Community Corrections Center-Lincoln in February is back in custody.

A Wymore woman's excessive force lawsuit against a Gage County sheriff's deputy isn't likely to make it in front of a jury, following a ruling…

Firefighters examine the damage at 1634 Prospect St. after two parked vehicles were hit and went through the wall of the apartment building.