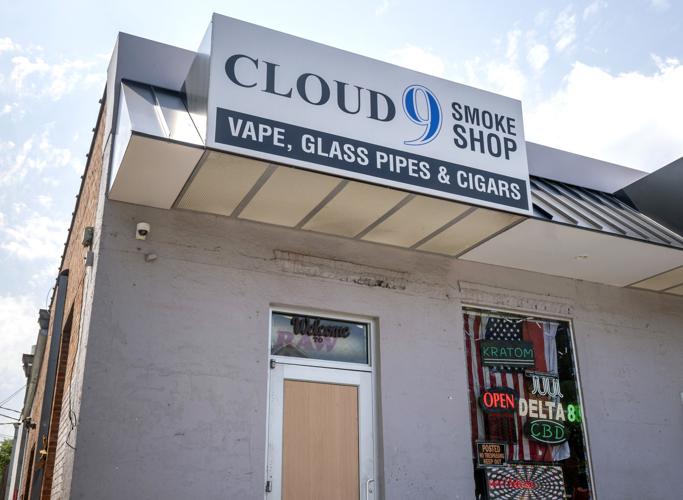 The front door of Cloud 9 Smoke Shop on Friday after an overnight break-in. A different Cloud 9 location, near 50th Street and Old Cheney Road, was burglarized early Wednesday. 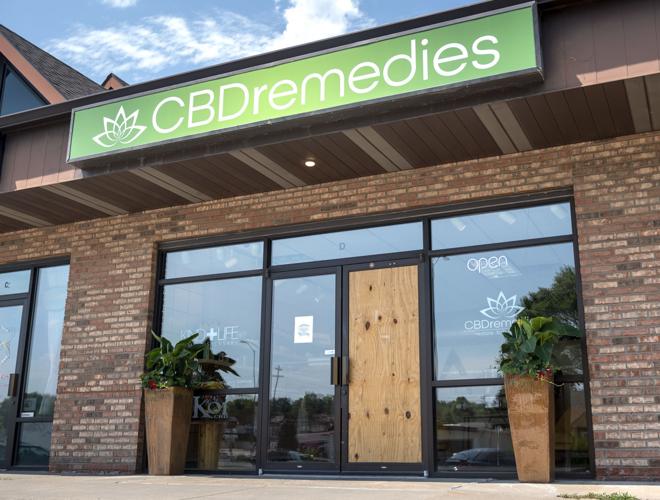 The damaged front door of CBD Remedies on Friday after an overnight break-in.

Burglars struck two separate vaping and CBD-related stores in Lincoln early Friday morning, marking the latest hits in an intense spike of such incidents throughout the city that dates back to at least late May.

In both cases, burglars gained entry into the businesses — after causing $500 in damage to each storefront, Bonkiewicz said — and made off with product from inside the shops.

The owner of Cloud 9, near 11th and F streets, is still conducting inventory to determine what exactly burglars took. The same is true at CBD Remedies, near Normal Boulevard and South 48th Street, where burglars set off an alarm upon entry at 4:48 a.m. Friday.

Officers have processed both scenes for forensic and digital evidence, Bonkiewicz said, and the department is investigating the incidents as if they are related — though they haven't yet confirmed whether that's the case.

"If a particular type of crime is occurring and there are some specific businesses that are involved, I think it's natural for our investigators to examine if these are all linked or if they're separate instances," Bonkiewicz said at a media briefing Friday morning.

The pair of break-ins comes two days after another similar burglary, totaling three in as many days. LPD discovered a broken window at Generation V E-Cigarettes and Vape Bar around 4:30 a.m. Wednesday, where the owner of the business near Holdrege Street and North Cotner Boulevard reported a preliminary loss of $2,000, Officer Erin Spilker said.

Burglars in that break-in caused around $1,700 in damage, Spilker said — a figured that included both broken glass and damaged furniture.

That Lincoln Police discovered the burglary at Generation V without an alarm sounding or report made is an indication of the department's efforts to put a stop to the burglaries.

Video surveillance showed Wednesday's break-in occurred around 1:40 a.m., Spilker said, more than three hours before officers checked in on the business. She called the late discovery "disappointing" for all involved.

Bonkiewicz was hesitant to describe specifically the strategies behind those efforts, but said LPD is "very aware of this problem and we are working with business owners and taking steps to improve prevention and response to these types of incidents."

Video from the break-in at Generation V revealed at least a moderately coordinated effort by multiple burglars, with the group wearing face coverings to hide their identities.

The latest three break-ins follow at least two others in recent months that seem to align with those investigated this week.

Would-be burglars forced their way into the front of G&G Smoke Shop, near 27th and Randolph streets, just before 3 a.m. on June 15, setting off an alarm and alerting LPD and the shop's owner.

By the time police arrived, the store was empty, Spilker said in June. Internal surveillance video reviewed by police showed two people running through the store and kicking at an interior door, but leaving without gaining further access, Spilker said. The would-be burglars didn't make off with any property, but caused an estimated $500 in damage.

And on May 23, officers found shattered storefront glass at Lincoln Vapor just before 3 a.m. after responding to an alarm call. Investigators then weren't sure if anything had been stolen from the business, near 68th and A streets, but the would-be burglars caused an estimated $700 in damage to the building.

Bonkiewicz said the department is monitoring the break-ins, and despite the intense uptick in the last week, vape shop burglaries in 2021 seem to be on par with what they were a year ago.

But the uptick that seems to involve the same group of burglars could date further back than this calendar year.

Police in August 2020 linked three teens to a string of break-ins at smoke shops in February, arresting two of them and referring a third to juvenile court.

Timothy Goodman, a manager at the Lincoln Vapor location hit by burglars in May, said that break-in was just the latest in a string of six incidents in the last year or more. Goodman said it's his understanding that every break-in can be linked to the same group.

Goodman, who has worked at Lincoln Vapor for nearly four years, said a group of burglars stole $2,000-$3,000 worth of merchandise in May and have lifted around $16,000 in products from the business in the last year and a half.

The shop manager said the burglars' impact has been hampered by an alarm Lincoln Vapor implemented sometime after the break-ins started — with the new system alerting authorities and limiting the time the group has before LPD arrives.

Still, Goodman lamented the losses the business has already suffered and the seeming inability to prevent more.

"It's frustrating beyond belief," Goodman said. "I wake up most nights in the middle of the night and check the cameras to make sure nobody got in."

Police say the man was driving his orange 2020 Yamaha motorcycle south on 27th near F Street around 9 p.m. on Sunday when he lost control of the bike, hit the curb and struck a pole.

The theft comes a week after an assault and theft in Antelope Park centered around a 2008 Grand Prix.

More than 50 friends and family members gathered near where Nevaeh Martinez was killed Friday evening in Topeka, Kansas, releasing pink and purple balloons to honor the teen remembered for being a friend to many.

Lavetta Langdon was sentenced after pleading no contest on June 1 to manslaughter.

Lancaster County Attorney Pat Condon said: "Shop owners are understandably upset about being continually targeted over the past year and a half."

Though cigarette use among Nebraska high school students has dwindled, more students regularly use nicotine or tobacco products now than did in 2013, despite state and national efforts to curb what experts call an epidemic.

Monkeys in central Thailand city mark their day with feast

The front door of Cloud 9 Smoke Shop on Friday after an overnight break-in. A different Cloud 9 location, near 50th Street and Old Cheney Road, was burglarized early Wednesday.

The damaged front door of CBD Remedies on Friday after an overnight break-in.