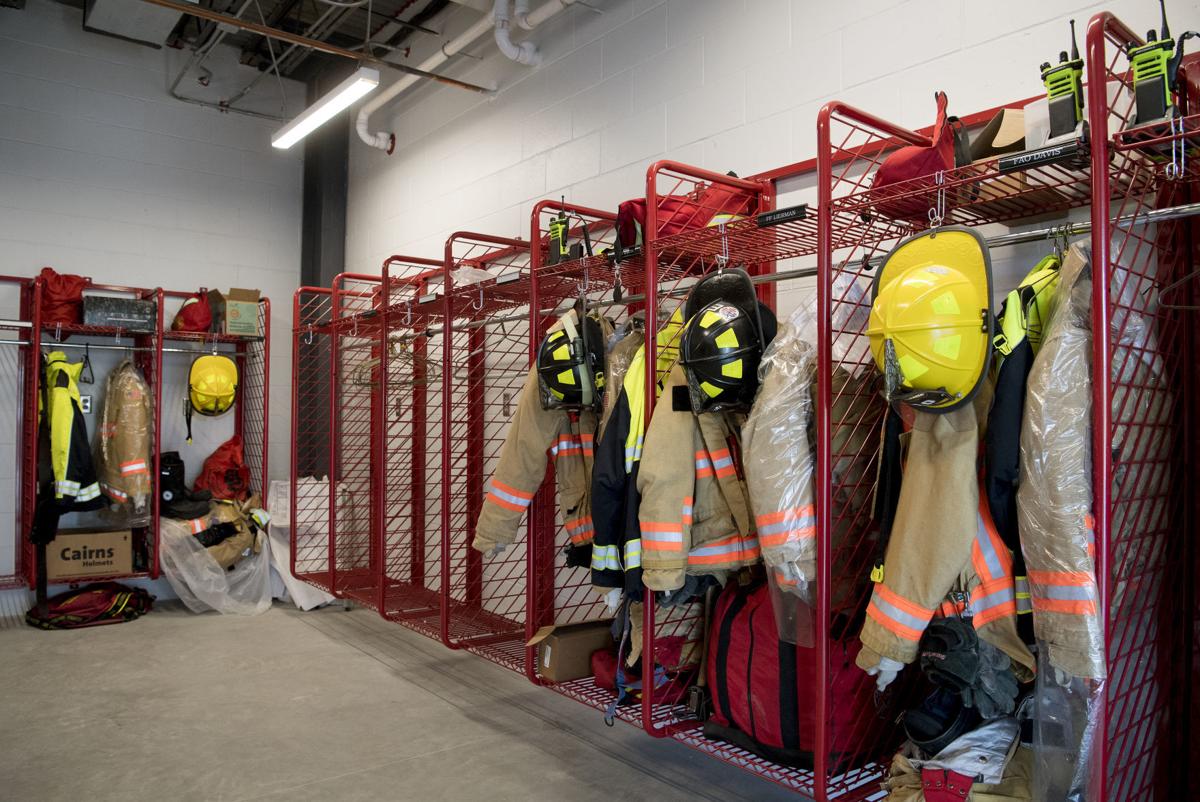 The firefighters' equipment room next to the truck bay at Fire Station 10. 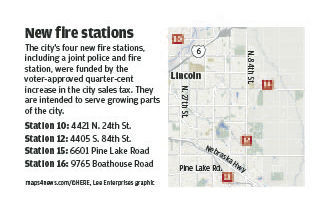 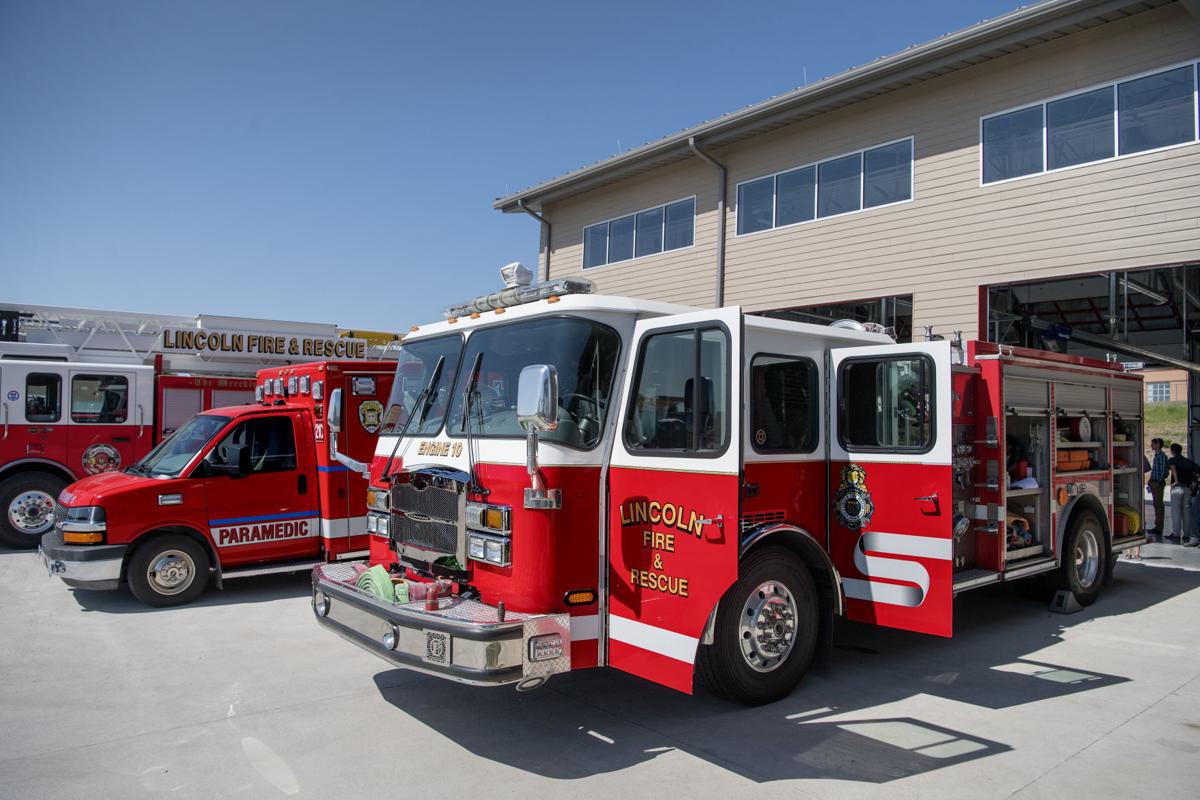 Engine 10 (foreground) and Paramedic 210 are displayed Thursday at the opening of the Lincoln Fire Department's relocated Fire Station 10 at 4421 N. 24th St. 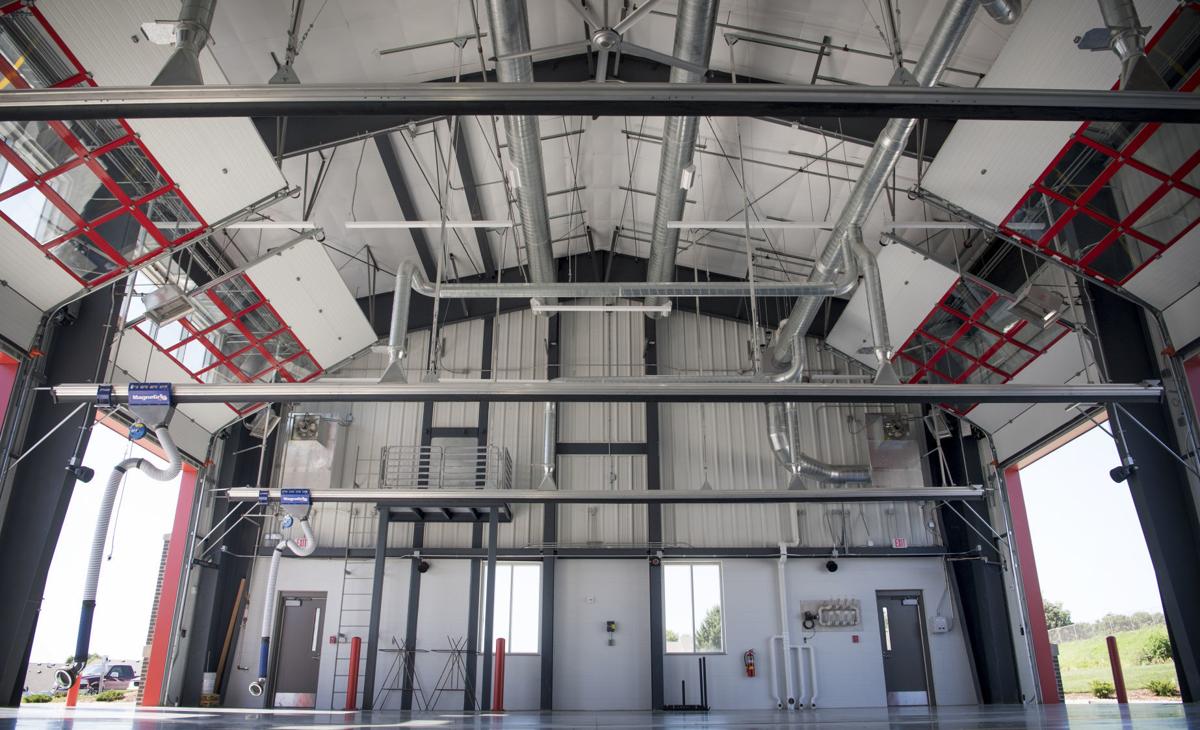 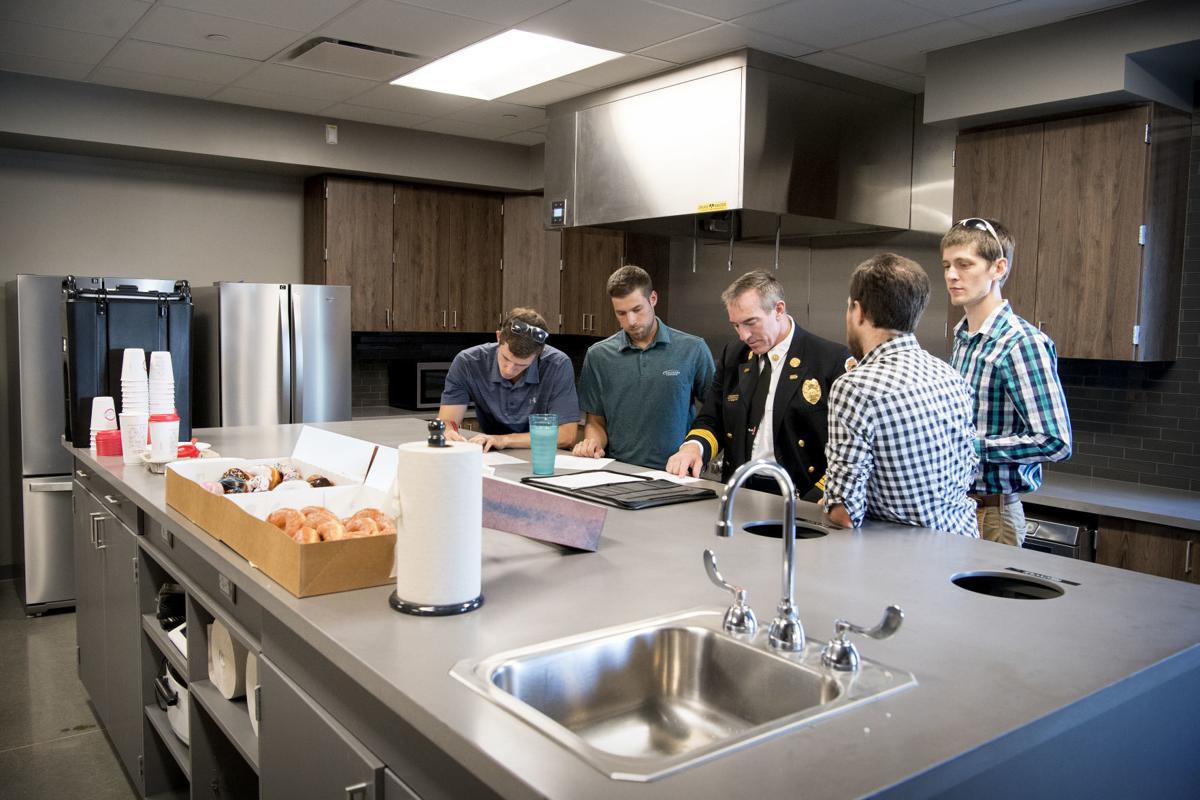 A view of the firefighters' kitchen at Fire Station 10. 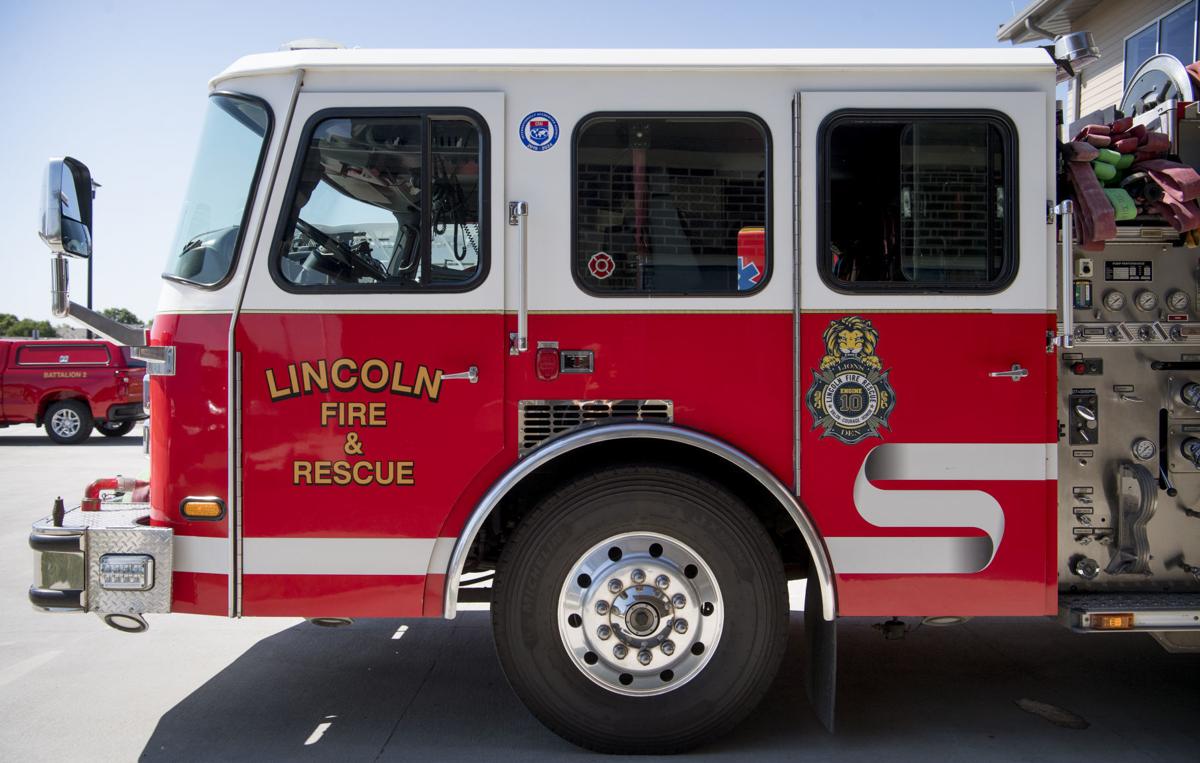 The new Engine 10 truck at the opening of the Lincoln Fire Department's Fire Station 10 on Thursday. 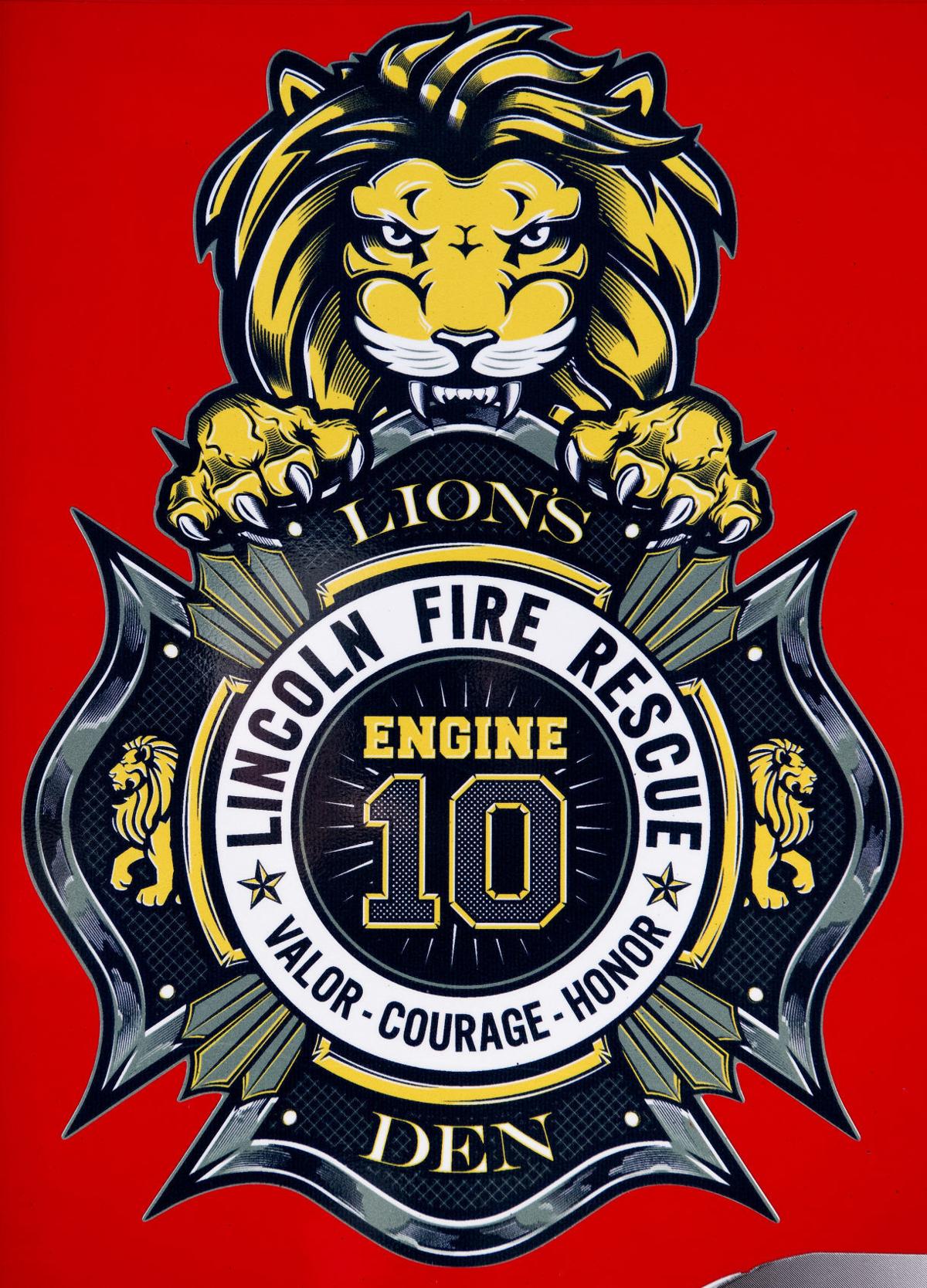 The logo on Engine 10 at the opening of Fire Station 10. 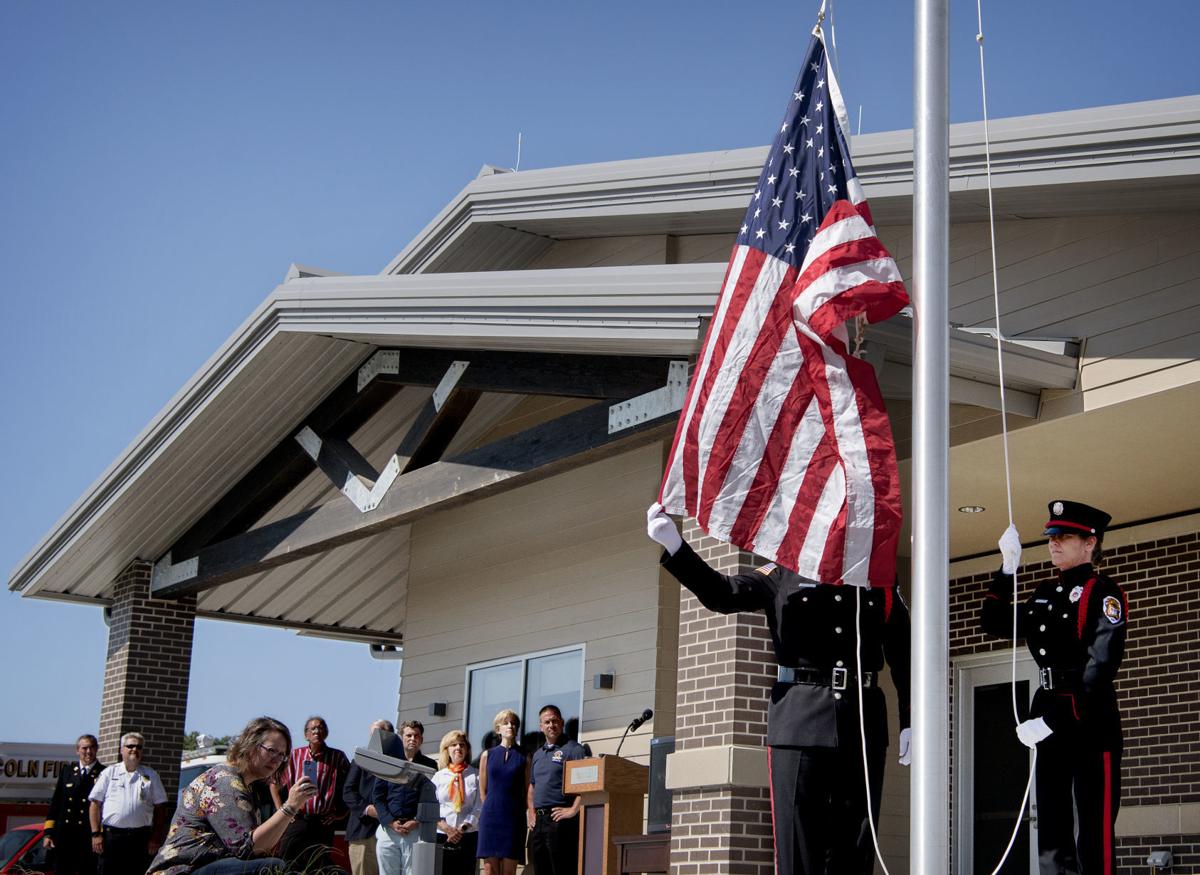 The Stars and Stripes are raised Thursday at the opening of the Lincoln Fire Department's relocated Fire Station 10 at 4421 N. 24th St

The station, at 4421 N. 24th St. just south of Superior Street, is one of two relocated firehouses paid for with a quarter-cent sales tax approved by voters in 2015 for public safety improvements.

Fire officials moved the station from 14th and Adams streets to reconfigure the city's map of firehouses to improve response times as the city grows outward.

Children from a nearby daycare and residents from a senior living center next door, along with neighbors, firefighters and city officials, gathered for the pomp and circumstance.

It's the first opening of four stations paid for with $24 million collected by the sales tax, which also purchased a new emergency radio system.

The old Fire Station 10, built in 1965, was one of several stations in need of repairs. It was also not built to keep diesel exhaust fumes away from crews who live one-third of their lives at the station, Lincoln Firefighters Association President Adam Schrunk and former city Public Safety Director Tom Casady said.

"I would challenge anyone to go to the old Station 10 or the old Station 12 and spend half of their month there doing 24-hour shifts," said Casady, who oversaw this and other major public safety improvements until his retirement earlier this year.

Casady believes the 27th Street corridor north of the station will see markedly better fire response times as part of this relocation.

"It's much closer to where the workload and risk actually is, and we still have good response time into the area where the old Station 10 served as well," he said.

Fire crews moved in and began working there July 1. These stations will be a source of pride, boosting morale among the city's firefighters, Despain and Schrunk said.

The station features a gym, lounge room, modern kitchen, separate living quarters, rather than communal bedrooms featured in about half the stations, and red garage doors that allow natural light into the bays.

Among the most notable amenities in the new station is a separate ventilation system to keep the carcinogenic particles on the firefighting gear from circulating in the living quarters when firefighters return from calls.

New stations will feature these systems as a means to help mitigate cancer risk, the chief said.

More fire station openings should follow in the coming months.

Newly created Station 15, at 6601 Pine Lake Road, is set for a ribbon cutting next month, he said.

Lincoln police officers have already begun working out of the shared substation there, but Despain said the fire station isn't ready yet because the department isn't able to staff it with rigs and crews yet.

Fire Station 12, which is on 84th Street at South Street, will move further south to Pioneers Boulevard. It is set to open in September.

The last firehouse under construction, Station 16, off of 98th and O streets, won't open until February or March of next year.

As construction work on the new and relocated stations nears conclusion, the fire department has sought an outside study to evaluate the older stations, grade them and recommend any replacement, repairs or renovation.

One of the stations in need of evaluation is Station 7 at Cotner Boulevard and A Street, Despain said.

It's in disrepair, and fire department administrators worry maintenance needs will nickel and dime the department, the chief said.

By contrast, Station 10 and the other stations under construction are state-of-the-art, he said.

It impressed Kathleen Fager, who has lived in her home on Dodge Street south of the fire station for 15 years.

The neighborhood is ready to welcome its newest arrivals, she said at Friday's ceremony.

Children at Campbell Elementary will love seeing the big red engines and trucks, she said.

She's not concerned about the noise, as it is just one of many sounds in an area with lots of building construction. Also, because the sirens signal that help is on the way.

Her only concern is for the fire crews that have to deal with medians along Superior Street, which only allow left turns in certain areas.

Should UNL pay for city fire, medical services? Councilman wants the city to talk about it

Every year, Lincoln Fire and Rescue squads race to the University of Nebraska-Lincoln more than 350 times.

City Hall: Confusion over how many firetrucks the city of Lincoln is buying

There’s some confusion over just how many fire engines and trucks the city might be buying over the next two years.

What started as a routine response to a car accident last week ended early for a Lincoln Fire and Rescue rig.

The $1 million question: What to do with leftover quarter-cent sales tax revenue?

The city of Lincoln will likely have at least $1 million, maybe more, left over from the quarter-cent sales tax that is paying for public safe…

Police: Teens who caused car fire caught nearby rifling through another car

A major gas leak Tuesday could have caused problems for the entire town of Waverly.

The firefighters' equipment room next to the truck bay at Fire Station 10.

Engine 10 (foreground) and Paramedic 210 are displayed Thursday at the opening of the Lincoln Fire Department's relocated Fire Station 10 at 4421 N. 24th St.

A view of the firefighters' kitchen at Fire Station 10.

The new Engine 10 truck at the opening of the Lincoln Fire Department's Fire Station 10 on Thursday.

The logo on Engine 10 at the opening of Fire Station 10.

The Stars and Stripes are raised Thursday at the opening of the Lincoln Fire Department's relocated Fire Station 10 at 4421 N. 24th St