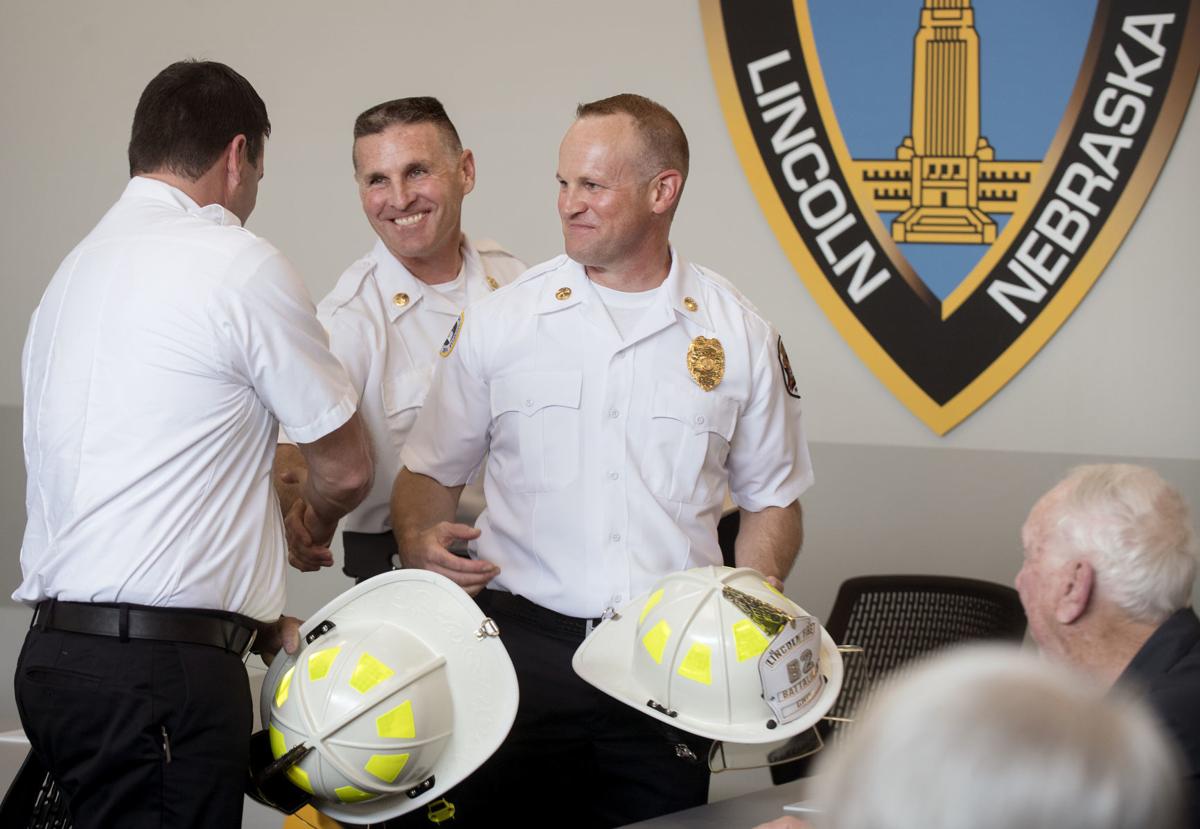 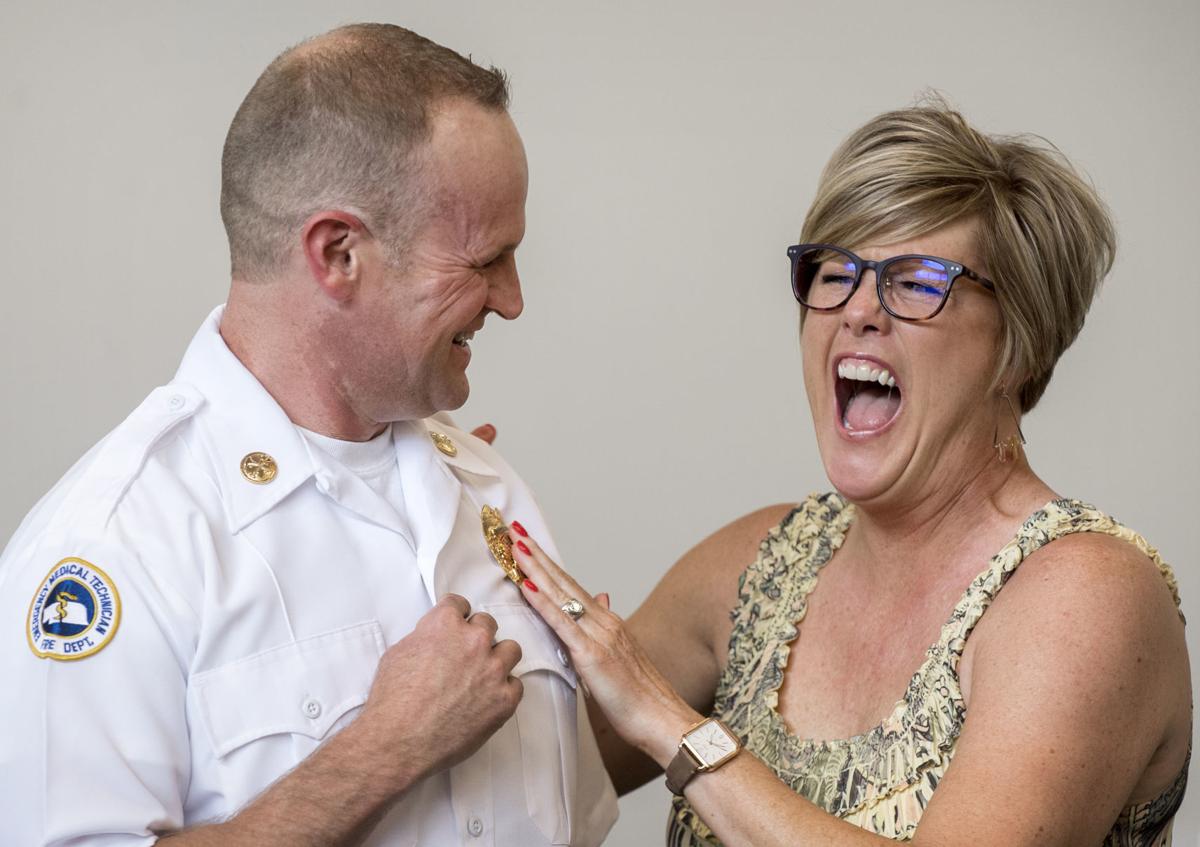 Kelly Watton (right) laughs after safely pinning a battalion chief badge on her husband, Robert Watton, during a ceremony on Thursday at Station 15. Watton was joined by fellow new battalion chiefs Lloyd Mueller and Michael Smith and their families and colleagues for the event. 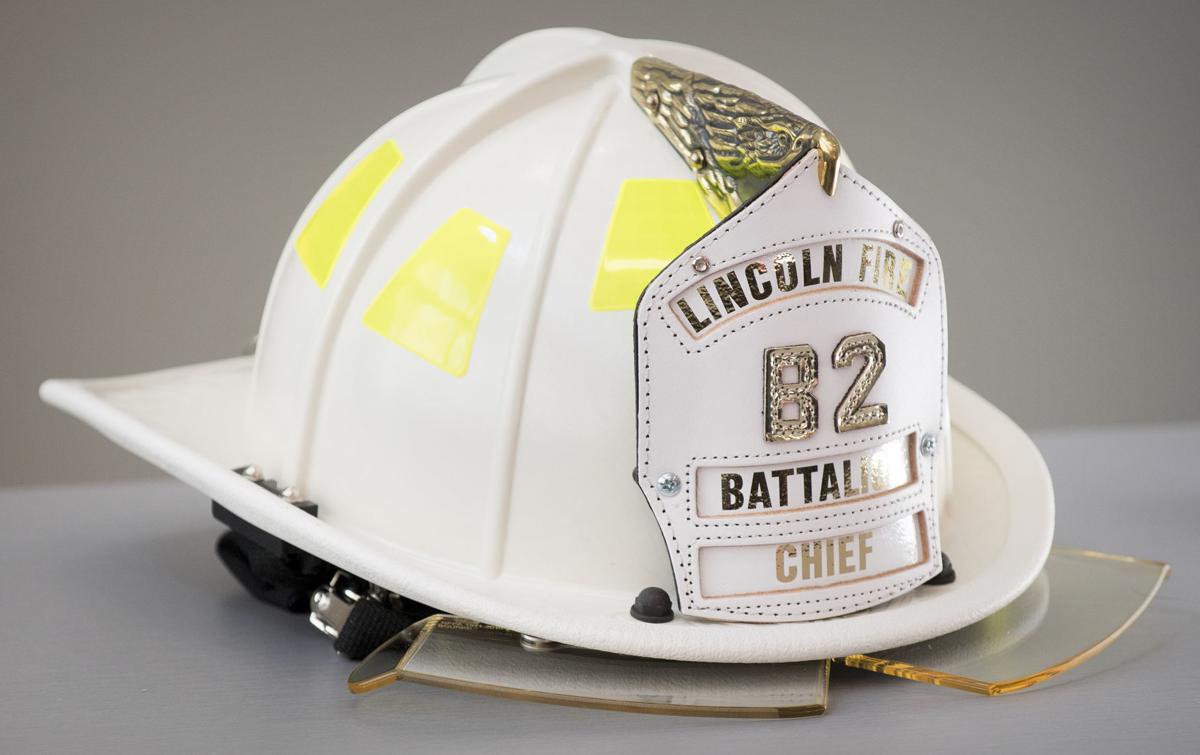 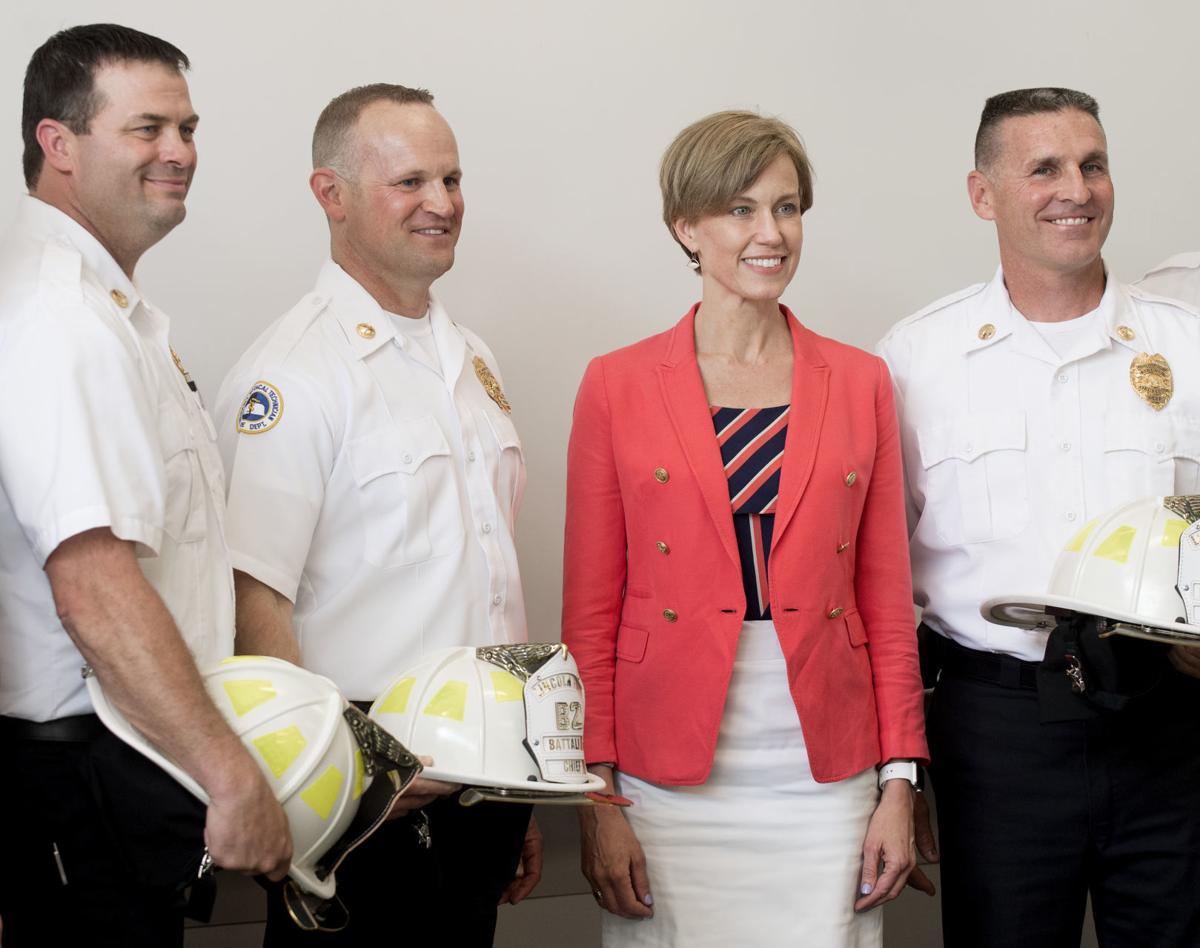 Chief Micheal Despain made captains Lloyd "Eddie" Mueller, Robert Watton and Michael Smith battalion chiefs at a ceremony at the new joint police-fire station at 6601 Pine Lake Road, where Battalion 2 will be based.

When crews respond to fires, hazardous materials calls and some crashes, the battalion chief oversees and directs operations of the department's 18 crews.

"It was just too hard for one battalion to cover that many stations," Despain said. "Every single time we had multiple fires or incidents at (the same) time, the need was evident."

They join three other battalion chiefs who each supervise a 24-hour shift.

The second battalion will allow the department to divide its incident commanders for the city geographically, department spokeswoman Nancy Crist said.

Battalion chiefs are generally paid about $110,000, but Despain said these three will start slightly lower because they are newly promoted.

The promotions will save the department about $100,000 a year annually in overtime spending because the department won't have to tap captains to temporarily fill the position when staffing is light, a mandate of the city's labor agreement, Despain said.

Before Despain took the helm, Chief John Huff had seven battalion chiefs who rotated into the incident commander position while overseeing other administrative duties.

But Despain reorganized so the 18 crews on each shift would have a consistent shift supervisor, Crist said.

Still, that meant one battalion chief managed 100 people at once and, when multiple major calls came in, battalion chiefs who were on vacation or off work were called in to help cover, Despain said.

With two battalion chiefs, the ratio is cut in half, he said.

Families of the three new battalion chiefs pinned on their gold badges during Thursday's ceremony, where the three men also received their white hats.

They begin their new assignments Wednesday.

Lincoln Police have cut the cord on real-time public access to the department's primary dispatch channels.

The attorney for a Lincoln Fire & Rescue captain who won a $1.2 million verdict against the city last month for retaliation after he repor…

Should UNL pay for city fire, medical services? Councilman wants the city to talk about it

Every year, Lincoln Fire and Rescue squads race to the University of Nebraska-Lincoln more than 350 times.

Plans underway for 2 more Lincoln fire stations, in addition to 4 now being built

With work still underway on four new fire stations, city officials are already planning for two more, which they say will help keep pace with …

A lightning strike at 6 a.m. Friday sparked a house fire in southwest Lincoln that caused $50,000 in damage, according to Lincoln Fire and Rescue.

Two of lanes on O Street will be closed beginning Saturday at 8 a.m.

Portion of South 82nd Street to close for several months

South 82nd Street, from Saltillo to Roca roads, will be closed beginning Monday for a regrading project, according to the Lancaster County Eng…

Portion of West Fletcher Avenue, US 34 to close Tuesday

West Fletcher Avenue, between U.S. 34 and Northwest First Street, will be closed on Tuesday, according to the city.

A major gas leak Tuesday could have caused problems for the entire town of Waverly.

Kelly Watton (right) laughs after safely pinning a battalion chief badge on her husband, Robert Watton, during a ceremony on Thursday at Station 15. Watton was joined by fellow new battalion chiefs Lloyd Mueller and Michael Smith and their families and colleagues for the event.